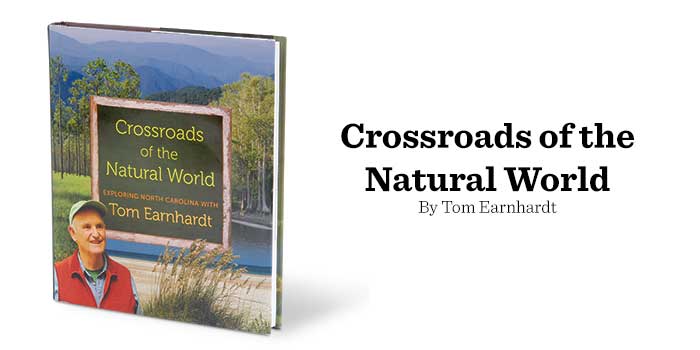 You couldn’t wish for a better guide to North Carolina’s extraordinary natural places than Tom Earnhardt. A lawyer by profession and self-described “naturalist by preference,” Earnhardt’s curiosity about and deep knowledge of the natural places in our state inform his UNC-TV series, “Exploring North Carolina.” His new book, Crossroads of the Natural World, reflects an expanded reverence for the rich diversity of the state, encompassing geology, early human habitation, flora and fauna, and cultural history.

Earnhardt makes a convincing case for why North Carolina is “one of nature’s unique crossroads,” an epicenter where several natural boundaries converge, resulting in rich biodiversity unmatched in the country. Each chapter in the book is a mini-essay, introducing readers to the natural wonders of the state. Earnhardt explores unusual plant communities, explains why animals — from salamanders to brook trout to luna moths — are special, and emphasizes the interconnectedness of everything in the natural world.

Earnhardt says that “awe” is the appropriate response of people who encounter giant leatherback turtles on the coast or watch the sky fill with “layers of undulating chevrons of snow geese” or observe the stunning mountain vistas of the Appalachians. His descriptions of nature, supplemented by the book’s color photography, will inspire readers and encourage them to be good stewards of the land. And that is part of Earnhardt’s mission. He says we are at another kind of crossroads — a place where much of the state’s rich diversity is in peril because of overdevelopment and threats to existing environmental protection. The more we know about the state’s natural resources, the better we will be at taking the long view and “protecting quality of life and the natural treasures with which we were blessed.”

Crossroads of the Natural World belongs in the home of every North Carolinian who cares about our state. It’s beautiful enough to be a coffee-table book, but it’s also a book that deserves to be read and reread for both pleasure and edification.

What makes North Carolina a Crossroads?

In a relatively small space, 180 miles north to south and 500 miles east to west, North Carolina is temperate, subtropical, and subarctic. We’re located in temperate latitudes, but our proximity to the warm Gulf Stream makes us the northern boundary for species commonly found in Florida.

Species associated with subarctic habitats in Maine and Canada — from the red spruce to the tiny saw-whet owl — live on our 180 peaks in excess of 5,000 feet, including 43 higher than 6,000 feet. At 6,684 feet, Mount Mitchell is the highest mountain east of the Dakotas. Other Southeastern states don’t come close: The highest mountain in South Carolina is 3,547 feet; Georgia’s is 4,695 feet; and Virginia’s is 5,722 feet. One formula holds that every 1,000 feet in altitude is like traveling 200 miles north. Thus, the fauna, flora, and climate on Grandfather Mountain (5,946 feet) are roughly equivalent to those 1,200 miles to the north.

We boast 17 river basins with more than 40 inches of rain per year, geological features ranging from more than a billion to only a few million years old, and an ecological tapestry that was never erased by glaciers during the ice ages.