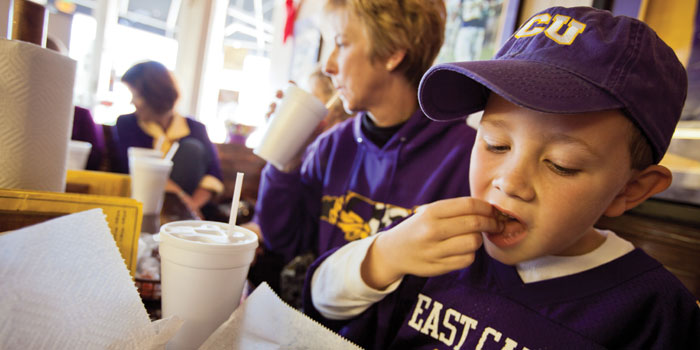 A line snakes out the door of Cubbie’s in downtown Greenville. It’s game day Saturday, and the Pirates are in town.

Inside, underneath the antique, tin ceiling — an original from the building’s late-1800s construction — a sea of purple and gold covers the dining room. Students, alumni, and townsfolk pack into booths, reach into baskets of French fries, and crane their necks for a peek at the television mounted on the wall. In the kitchen, cooks flip beef patties in rapid fire and layer cheesesteaks with a few motions of their well-trained wrists. Despite the chaos and the crowds, Cubbie’s employees work steadily. They thrive in this institution built on mastering the basics and drawing the East Carolina University community back to this downtown storefront generation after generation.

As you stand in line, you feel one of fall’s first breezes, a welcome respite from sweltering coastal Carolina summers. As you linger outside waiting for a seat, you look across the street at the parking lot. Last night, that lot held a pregame party with games and live music — a warm-up for today. Your nose picks up the familiar scent of grilled burgers and starchy potatoes. Someone walks past you with a fresh-squeezed lemonade to go, heading toward campus. Your mouth waters, and you realize that this is all part of the experience: the waiting, the anticipation. Finally, you reach the front of the line and feel the excitement of sitting down in this vibrant place; soaking up the energy; polishing off a shrimp burger; and setting out for Dowdy-Ficklen Stadium, Pirate pride in tow.

You’ve entered Pirate nation. Inside Cubbie’s, the fervor starts to brew, fans discuss strategy at the lunch counter or across booths, and team colors grace everything from T-shirts to banners slung on the walls. Here the youngest fans get their first glimpses of the way this college athletic program consumes their parents, turning them back into students, if only for a day. Here the oldest fans convene to remember past games over cheeseburgers. And if you want to join them, to eat a Cubbie’s cheesesteak or burger when ECU plays at home, you’d better wear your loyalty on your sleeve. Pirate pride is catching, and at Cubbie’s, the sentiment is at its peak.

A downtown staple since the mid-’80s, Cubbie’s made its name serving basic American fare at wallet-friendly prices. A cheeseburger, a heap of fries, and a cold Pepsi runs you less than $10, and with the cost of your meal, you get service from a group of folks who make it a priority to make you feel at home. Pay attention to the cackles behind the lunch counter and the way the waitress spends several minutes chatting at each table before she ever mentions any food. These signs let you know this place has been here awhile.

Beneath pennants boasting ECU pride and ephemera, you find diners who have been here awhile, too. Cubbie’s proximity to campus, the courthouse, and a row of downtown shops makes it a popular destination for everyone from penny-pinching students to local businessmen. Greenville lawyer Frank Cassiano has a history with Cubbie’s that stretches back to its earliest years. Cassiano grew up with Cubbie’s founder Dean Barrow. They played sports together in Morehead City. When Cassiano settled in Greenville after working abroad in Japan, Cubbie’s became one of his mainstays, a place with familiar food and familiar people.

Barrow eventually sold the restaurant to Turner Mudge, who ran the restaurant for 15 years. In August, Mudge sold the business to Andy Case, his friend of 15 years. Case was a student at ECU in the late ’80s and early ’90s, and he remembers eating cheesesteaks there on Saturdays before home games.

Now as Cubbie’s owner, Case carries on the dining tradition for future Pirates. Working behind the counter during the restaurant’s busiest season comes with charms and difficulties, Case says.

“It’s very spirited for East Carolina fans. Fans around here are very die-hard,” he says. “For the staff, it’s chaos. We run nonstop.”

But as Case talks about the pressure, the tone of his voice carries a mixture of nostalgia and pride.

There are plenty of places like Cubbie’s in North Carolina and beyond, places where you can get your dose of American food that tastes like what you ate growing up in your own hometown and comes at a cheap price. Some of them even have the same retro charm — the lunch counters, the antique architecture.

But Cubbie’s withstands changing times in a way that other businesses don’t. Food is food, but Cubbie’s sells something less tangible, a complete experience — crisp fall afternoons on a game day watching the tiniest fans run through the parking lot in their cheerleader costumes; reaching into a basket of fries while Pirate Radio plays in the background; making predictions about how the team will fare against its foes; sinking your teeth into a burger; and tasting familiarity, comfort, anticipation.

We all have our places. And for Pirate nation, Cubbie’s is theirs.

Linnie Greene is a freelance writer in Carrboro. She contributes to several fiction and nonfiction publications, including Shuffle Magazine, and works at Flyleaf Books in Chapel Hill.