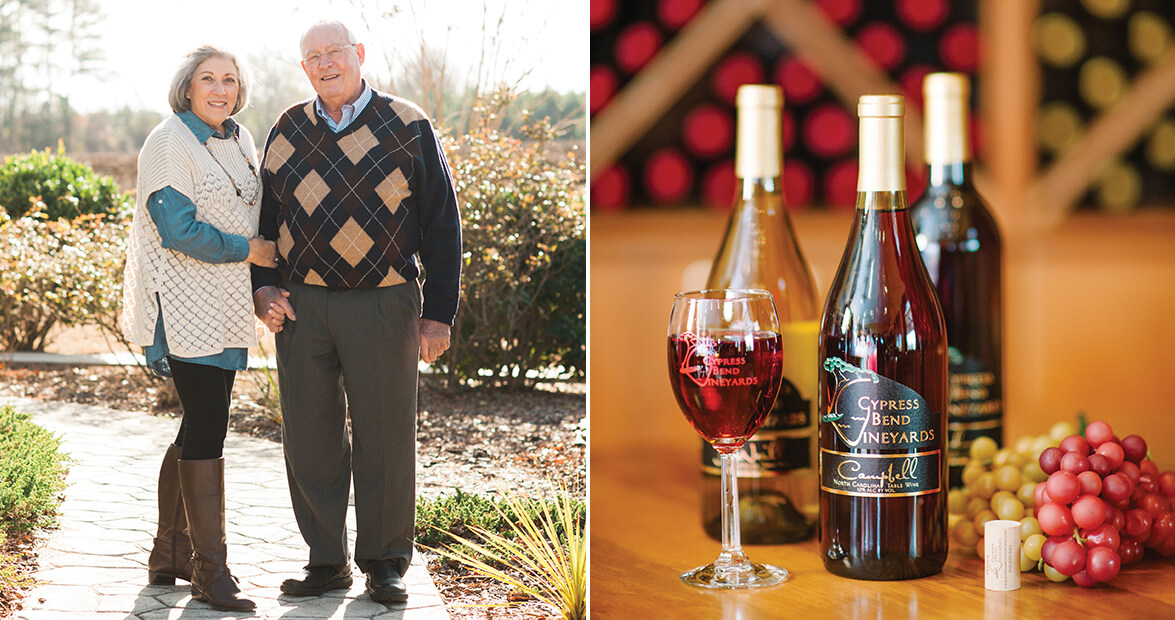 As a farm boy in Scotland County, Dan Smith knew that flat horizon was meant for stretching.

The swampy terrain that his great-great-great-great-great-grandfather — “there are five greats,” he says — settled in 1807 would someday be flowing with an “abundance of fruitiness” and “zesty aromas.” But well before Cypress Bend Vineyards poured its first glass, a farm boy had to see the world.

So Dan went off to the city, earned an engineering degree from NC State, taught math, joined the Army, left the Army, worked as an electronics whiz in retail, and headed up a robotics and engineering program at the Army’s Aberdeen Proving Ground.

But the piney panorama of home was tugging at him. He yearned for the sandy furrows that once pushed up cotton, corn, watermelons, soybeans, and wheat. He longed for the Lumber River’s inky current ambling through the shadows of cypresses and loblolly pines. He missed getting his hands dirty and watching things grow.

“He always loved the land and loved the farm,” says his wife, Tina. “We had an idea that we wanted to do something with the farm if we ever came back to live here.”

In the 1990s, Dan was employed as a science and engineering adviser for the Army. He had an opportunity to live in Italy or France, or to take a job at Fort Bragg, not far from where he grew up.

“We chose to come to Fort Bragg,” Tina says. Their acquaintances responded to the decision with a gasp. “People were like, ‘Why? You have the opportunity to go wherever.’”

Dan was going home, back to where his ancestors had stretched their own horizons. In the early 1800s, the Rev. Daniel White, an itinerant Baptist preacher, and his wife, Catherine Campbell White, emigrated from Scotland and put down roots on a 1,000-acre farm along the Lumber, just outside present-day Wagram. There, they raised five children, and after 200 years, 85 percent of the land still belongs to, and is beloved by, their descendants.

Dan and Tina built a house on a sharp bend of the river, and in June 2005, they opened Cypress Bend Vineyards, with 35 of their 225 acres planted in muscadine vines.

“We wanted to do something with the land a little more notable, something that would carry on the legacy of the family,” Tina says.

At the wine-tasting room and retail store, visitors can sample wines named for Dan’s ancestors: Tina’s Magnolia Estate (“very soft and approachable”), Livy Estate (“bold of nose and taste”), and Catherine (“overt fruitiness” and “robust aroma”). People can sit there and sip while viewing the 20,000-gallon tanks through glass windows, or sit out on the patio and gaze at the wide sweep of farmland that has been in Dan’s family for generations.

At the end of the day, Dan and Tina retire to a house overlooking the cola-colored water of the Lumber River, a view framed by white Adirondack chairs and upside-down canoes on wooden racks. And there, on the crook of the river, at the water’s edge, stands the flattop cypress depicted in the winery’s logo.