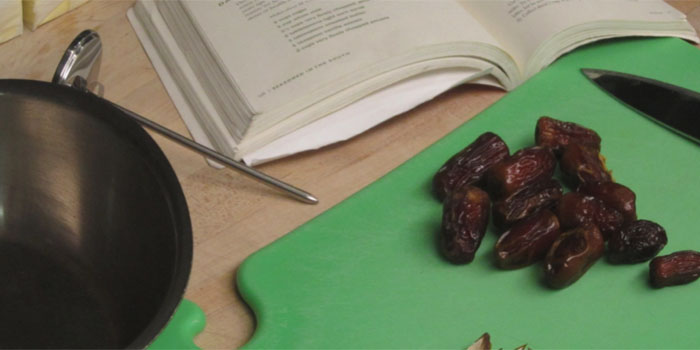 Grandmother only made candy once a year and when she did it was for gifts. She would stingily pass out the imperfect pieces to the family, but mostly it was rationed into small gift boxes and given away. Making the candy seemed to be a lot of trouble, fraught with failed attempts. And I suspect that to someone who had come through the Depression it seemed extravagant. We hated the rum balls. They tasted like whiskey. The favorites were the little brightly colored butter mints with a pecan half perched on top and the “sea foam” a sort of praline that was particularly prone to failure, and hence especially rare. Candy making is difficult until you get the hang of it. Her fudge recipe has stopped many cooks in their tracks. This date log is a cinch, though. It’s pretty when sliced and keeps well. Although it’s a holiday candy, at Crook’s Corner I put a slice of it on our plate of local cheeses.

This recipe makes about 4 dozen slices.

Butter a two foot long piece of aluminum foil and place it on a damp kitchen towel. Run your finger down the center of the foil lengthwise to make a faint indention.

Stir the sugar, milk, dates and corn syrup together in a heavy bottomed sauce pan. Cook over medium high heat, stirring constantly until the temperature reaches 235 or so on a candy thermometer. Beat in the butter and the vanilla and continue stirring until these things are absorbed and the candy has begun to pull away from the pan a little. Stir in the pecans. It will begin to thicken quickly as it cools. Spread it down the middle of the foil. As soon as it is cool enough to handle, use the foil and towel to help you roll it into a log. Chill in the foil. Slice into half inch rounds as needed.