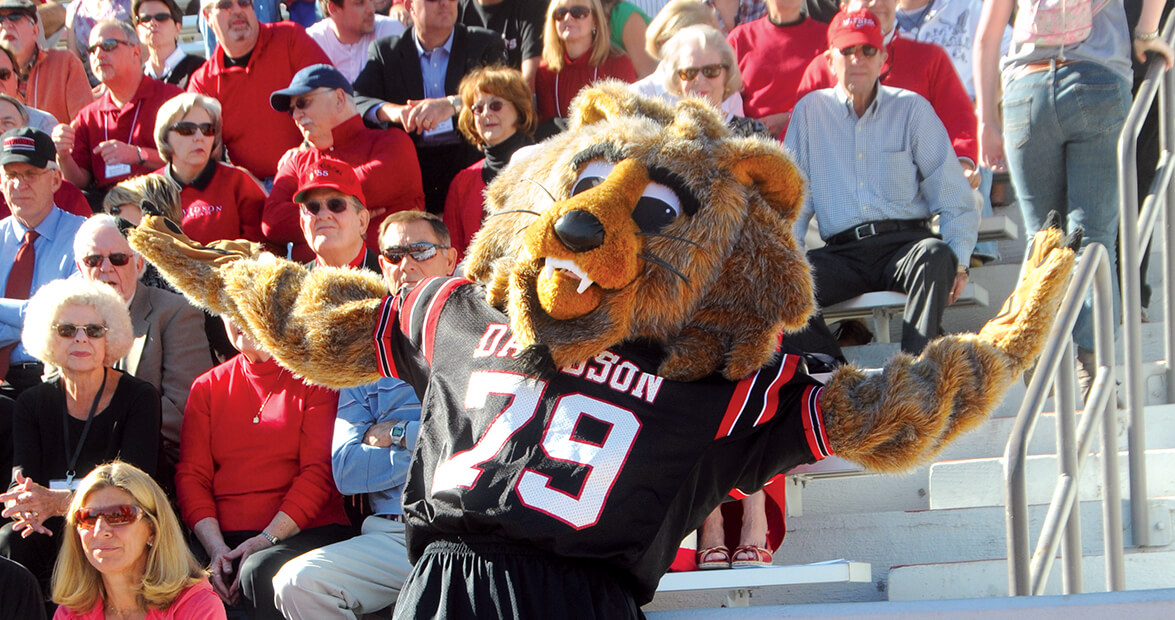 Before the Wildcat became Davidson’s official mascot of record, athletes at the small Presbyterian college were alternately referred to as the Preachers and the Presbyterians. Imagine, though, the image of a wildcat — a tenacious predator with fierce strength, tremendous speed and agility, and sharp, devastating claws and teeth — stalking the sideline. Until the mid-1960s, that very scenario existed at Davidson College.

“He was the real deal,” says former head cheerleader Talbert “Tarby” Bryant, Class of 1964, who helped take care of the wildcat.

Davidson’s unofficial history with wildcats goes back to the 1892-93 school year, when rampant rumors of a wildcat prowling the campus late at night prompted a few students to prank a buddy by making a wildcat out of wire and rags. It wasn’t until 1917, however, that Davidson athletic teams were referred to as the Wildcats, a practice first attributed to a student named Albert Potts, who wrote the nickname into sports stories for the Atlanta and Charlotte newspapers during his undergraduate days. Wildcats became the official mascot a year later.

Davidson’s first live wildcat, Felix, arrived around 1921, but died in 1924. Six months later, Felix II arrived, a female some students called Felicia. During games, the cat shrieked from a cage. At home, in a lair next to the gymnasium, she was fed live, fully grown hens.

So beloved was faithful Felix/Felicia that, after she died, the animal was stuffed and mounted. She’s still on display at the Baker Sports Complex.

Next came Min, Tom, Felix III, and, in 1961, Peter Stuart Ney (named for the designer of Davidson’s seal). “I tried to keep my fingers and hands away from him,” Bryant says with a chuckle.

Peter was the last live wildcat, and he never did scratch or claw anybody. “He,” Bryant says, “was a true Davidson gentleman.”