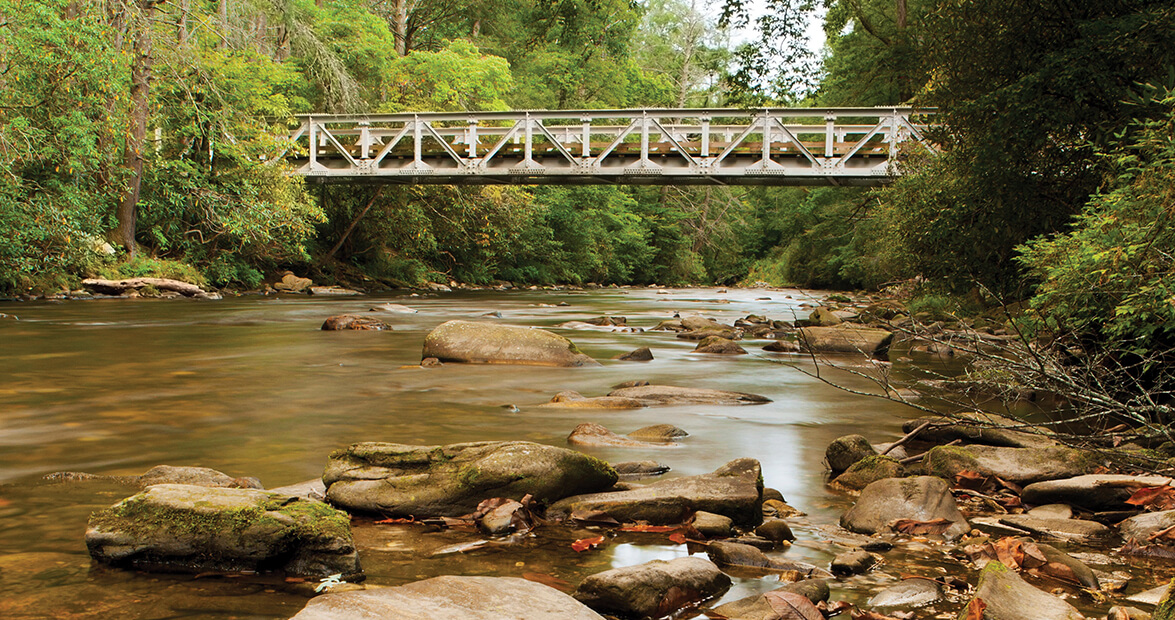 The Davidson River is short, narrow, and shallow. Starting as a trickle in the Blue Ridge Mountains, it flows down through Pisgah National Forest and past Brevard, eventually joining the French Broad River. During the summer, Davidson River Rafting rents out inner tubes to float down the river. In periods without rain, though, the ride goes from a relaxing glide to a bumpy, rocky shimmy along the riverbed. But even when there’s too little water for tubing, there’s always enough for river walking.

My family’s first experience “river walking,” as we called it, was in the Davidson River when I was 8. My mom, dad, sister, and I were hiking in Pisgah just off U.S. Highway 276 when the trail dipped down to the river and vanished. Rather than turn back, we hiked in the river.

There’s something exhilarating about standing in the middle of a river and feeling the rush of the water. Rivers in the mountains are clean, clear, and, above all, cold. Stepping into the icy water requires courage. Sometimes it’s easier to jump right in; other times, putting in one toe at a time eases the pain. Either way, the results are the same: After a few minutes, the stinging is replaced by numbness, and the cold becomes irrelevant.

After our first river walking adventure, it took days for our sneakers to dry. The next time, we came prepared, water shoes in hand.

My sister, Christy, then 6, led the charge down the path to the river. When the water came into view, we stumbled over the last few tree roots and onto the narrow dirt bank. We slipped on our water shoes and braced ourselves for the temperature shock.

River walking inspires — and requires — imagination. That day, Christy and I pretended to be woodland elves. I hopped stealthily from rock to rock, until a splash near the riverbank jerked me out of my magical world. Thinking it was probably a frog, I went to check it out. Whatever had made the sound had vanished, but I did see some other tiny critters in the stagnant pool.

“Fish!” I called out. Tiny silvery fish, no more than two inches long, darted in and out of the shadows. I slipped my hands into the water to try to catch one, but they were quick, and soon they, too, had disappeared. Next time, I thought.

Near the end of the day, in a playful attempt to get my mom wet, my dad tossed his T-shirt at her. A cold spray of water grazed her legs as the shirt plunked into the water.

My sister and I laughed, but my mom glared at my dad as his T-shirt floated down the river.

“Oh no! Not the shirt!” Dad yelled, but he was laughing, too. I tried to hurry downstream, but the shirt was already long gone. Dad shook his head. Sometimes you just have to go with the flow.

That’s just one of the lessons rivers have to teach: No matter how calm they may seem, their waters are never still. Even the shape of the rivers change over time. The water picks up rocks and sediment from one place and deposits them in another. The earth shifts and erodes, forming waterfalls and ravines. Rivers shape landscapes as much as landscapes shape rivers. Just like we shape our experiences, and our experiences shape us.