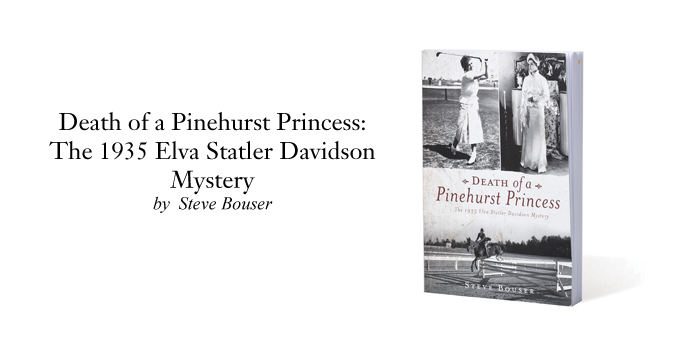 All the elements of a blockbuster news story are here: a socialite bride, a $1 million inheritance, an older husband of questionable social rank, Yankees misbehaving on Southern soil. Big-city reporters from around the country swarmed Pinehurst in 1935 to cover the puzzling death of 22-year-old newlywed Elva Statler Davidson, whose partially clad body officers found slumped over her Packard roadster.

Many suspected Elva’s 42-year-old husband, Henry Bradley Davidson Jr., of having a financial motive in his wife’s death. But the coroner’s inquest cleared him, and he never received an indictment. He later won a court ruling upholding his handsome bequest from young Elva’s will, where she signed over her entire fortune to him.

Like all great news stories involving trust funds and corpses, this Depression-era showcase trial really involved something else: money, class, privilege, the peculiar customs of the rich — played out in the exclusive Shangri-la known as Pinehurst. Sensational stories about attractive young women found dead, sans brassiere or undergarments, had no place at the resort village, and the local establishment pretended the sordid affair never happened.

Steve Bouser, editor of a weekly newspaper covering Pinehurst and Southern Pines, ably reconstructs the historic events and legal proceedings, and leans toward suicide as the cause. But in the end, not even a modern sleuth can untangle this complex web of intrigue.

Technically, the officials deemed carbon-monoxide poisoning the cause of death. But does that mean that Elva was a depressive who snuffed out her life with the fumes of her Packard? Or was Brad a two-timing conniver who killed his bride for the money? Or is there a third possibility — that Elva’s death was a freak accident, foreordained by the tragic circumstances of her life? All three seem plausible, and different people adhere to each theory. But no single explanation satisfies.