Why are we fascinated with other people and their pastimes? Hobbyists captivate us. Collectors of almost anything intrigue us — people with unique and sometimes odd goals, the more bizarre the better. I have friends, for instance, a brother and sister pair, whose ambition is to set foot in every county in North Carolina. On the one hand, I wonder why in the world; on the other hand, tell me more! (They’ve visited more than 70 counties so far.)

I think we envy these people; I know I do. We may not ourselves want a wall-size collection of souvenir spoons from every European village we have visited, but we admire those who do. Desire for the obtainable is an esteemed condition. It adds luster to our lives. Magic.

Which brings me to Dan Cheek.

Dan Cheek is a dentist by trade and has been for quite a long time. His office is in Hillsborough, but he lives in Durham with his wife, Jill, in a neighborhood of lovely homes and wide streets, modest lawns, welcoming porches. A quiet, friendly, quintessentially American tableau.

But behind their front door is an entirely different story.

Within Dan and Jill’s home are a hundred other homes, small businesses, churches, at least one cemetery, and a train — a veritable city. There is a vast electrified enterprise of semi-miniature buildings, water features, cobblestone streets, horses, buggies, evergreens and the winter-barren limbs of eerie black trees, and lots and lots of snow. And people. It’s populated by men and women, young and old, and a goodly number of ghosts as well. This is a place that Dan calls Dickens Village. It’s inspired by the Charles Dickens classic A Christmas Carol. But it’s Dan’s creation, and there is nothing quite like it.

As you enter the Cheeks’ home, Dickens Village is to the right, in what was once their living room. The village changes and grows — at least it has for the past 10 years; not so much anymore. But it is neither Dan’s imagination nor his desire that has stopped him: It is the size of the room in which his Dickens world began. A mere 12 feet by 10, the room is simply too small for his ambition. In other words, all that’s stopping him is the real world. His living room is as crowded as Victorian-era London.

How did it all begin? Hard to say. It was just that one day, Dan had an idea to build a scene — a vignette, as he calls them — inspired by the Christmas Carol story. Something small that could fit on a 4-by-4 foldout table. This is a fairly common hobby; there’s a small industry of Dickens-related merchandise out there. Jill bought a few buildings, Dan found a few; he had a good time putting it together. This was around 2012.

He told his brother about it. These were the phone calls that changed his life for the next 10 years. It’s an example of how a small thing suddenly becomes big, very big, and you’re given a choice: Go with it or leave it behind. 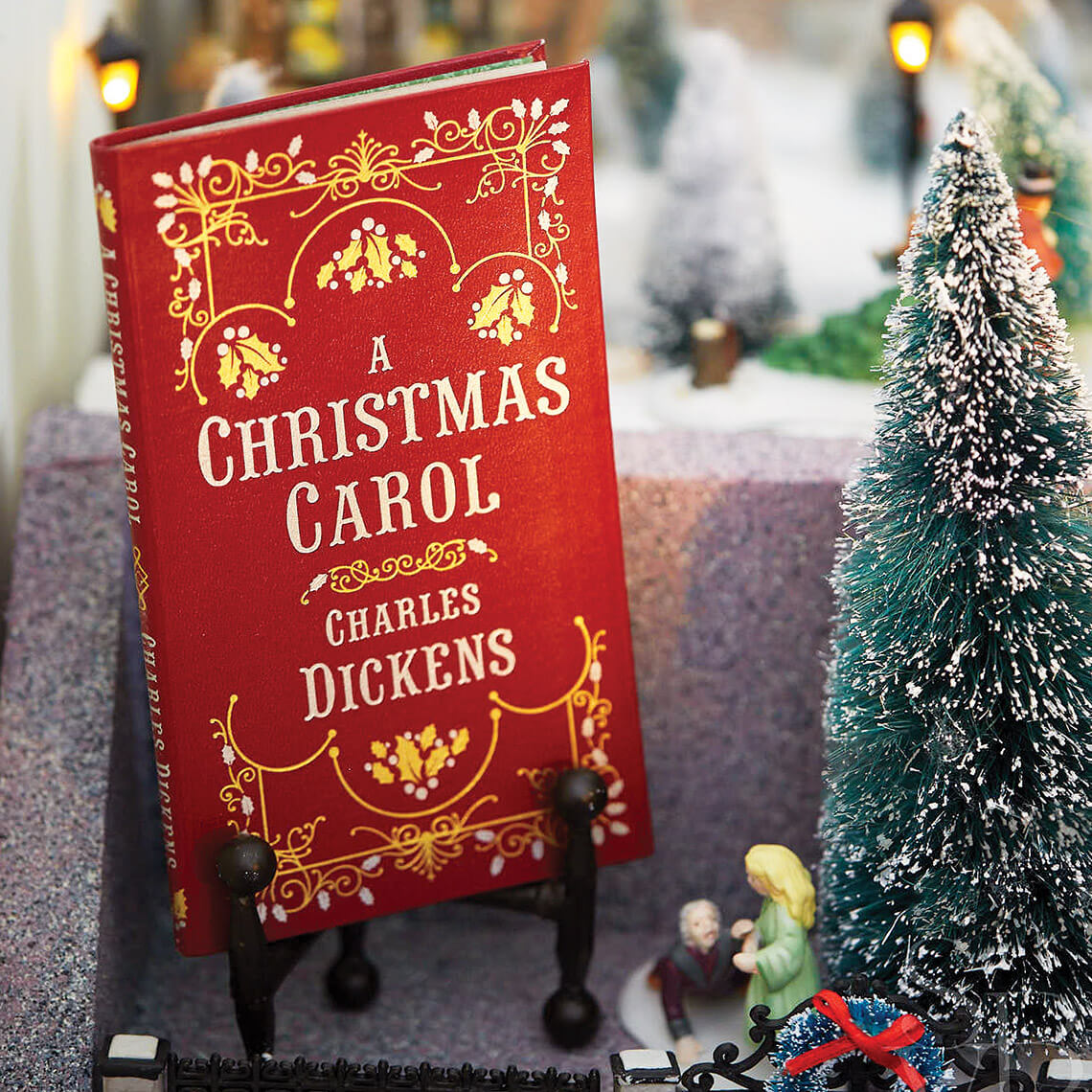 The classic book that inspired it all: Charles Dickens’s A Christmas Carol. photograph by Stacey Van Berkel

Dan’s brother found some Dickens-related merchandise at a garage sale and an estate sale, some 40 buildings in all, and wondered if Dan wanted them. The rest is history, except not really because then Dan discovered eBay, where Dickens and Christmas Carol-related work is outrageously abundant. He bought more. Then more and more. Finally, he made a rule: No eBay from January to July.

It was Covid that turned his pastime into an obsession. For two months, his office was closed, and he spent that time, to the exclusion of almost everything else, building Dickens Village. “Every day,” Jill says, betraying not a hint of bewilderment. “Every day, all day. On weekends, too.”

At its farthest point, the village seems to be built upon the side of a rocky hill. “I call that Mount Corona,” Dan says, “because that was the first ‘module’ I finished.” The Styrofoam waterfalls are covered in dental plaster and stained. Some of the rocks are the picture of verisimilitude. Dan’s dentistry skills came in quite handy. 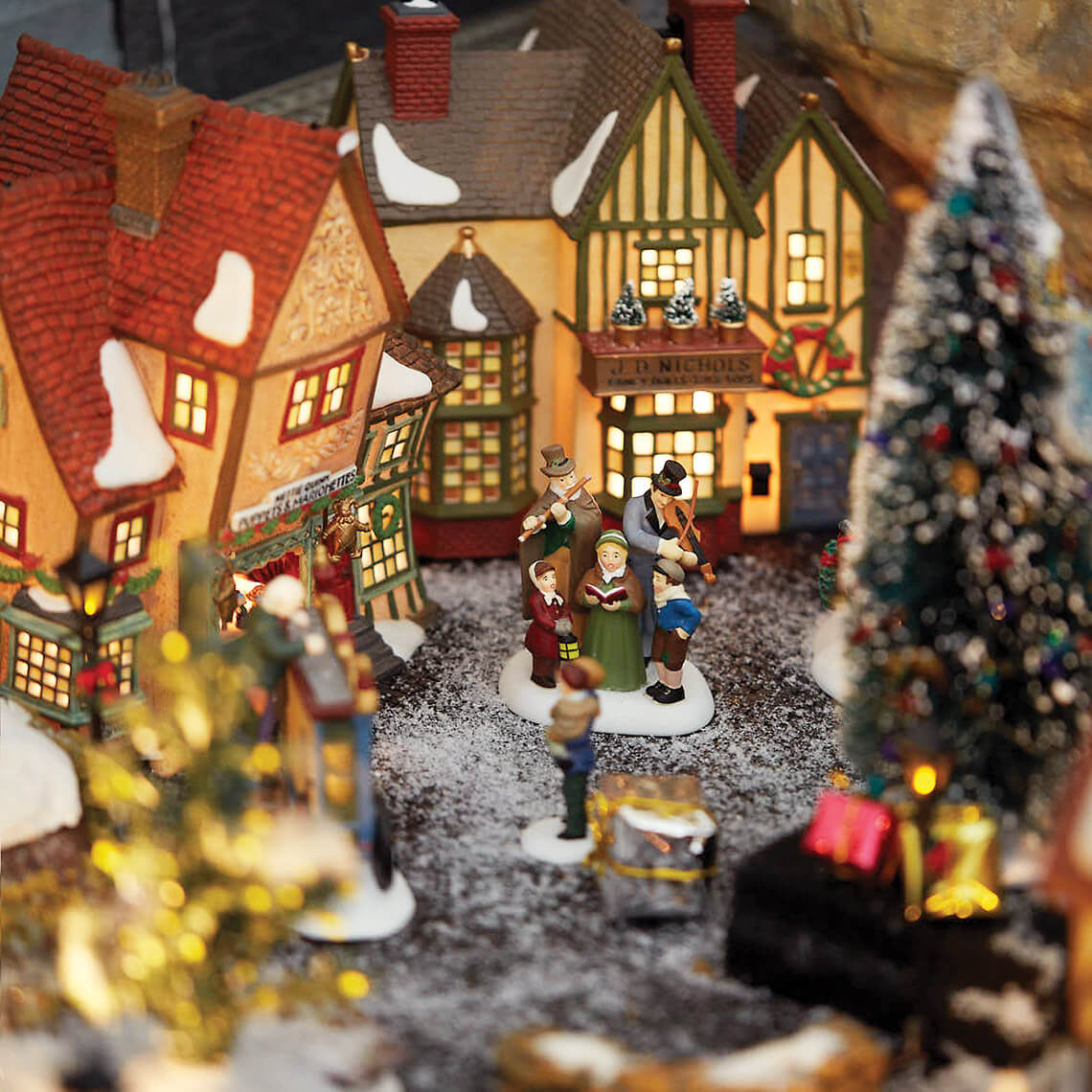 There are details to admire in every corner of Dickens Village like a musical group and a father-and-son pair watching a puppet show. photograph by Stacey Van Berkel

Did Dickens save him from Covid? Maybe. “Kept me from losing my mind,” he says. It gave him something to focus on while he was trying to keep his business going. Problems to solve that he could solve.

Once he went back to work, he’d come home and work on the village at night. One, two, maybe three hours at a time. It’s become sprawling and complex. Details: fishing poles made of sticks; straws for a gutter drain. There are many ghosts past, present, and future. Your eye can stay busy for quite a while. The graveyard is to die for.

Our obsessions seem to be the result of our own personal histories, our life experiences. Something happens that captures our imaginations. Coins, stamps, and Barbie dolls may be common collections found in many homes, in many places, just because. But sometimes, as in the case of Dickens Village, it’s very particular.

As a child growing up on the outskirts of Detroit in the 1960s, Dan and his family used to listen to A Christmas Carol being read on a scratchy LP. Every single Christmas. Dan remembers listening to the record while his mom and dad sat in their chairs and he and his brother lay on the floor, lights dimmed. 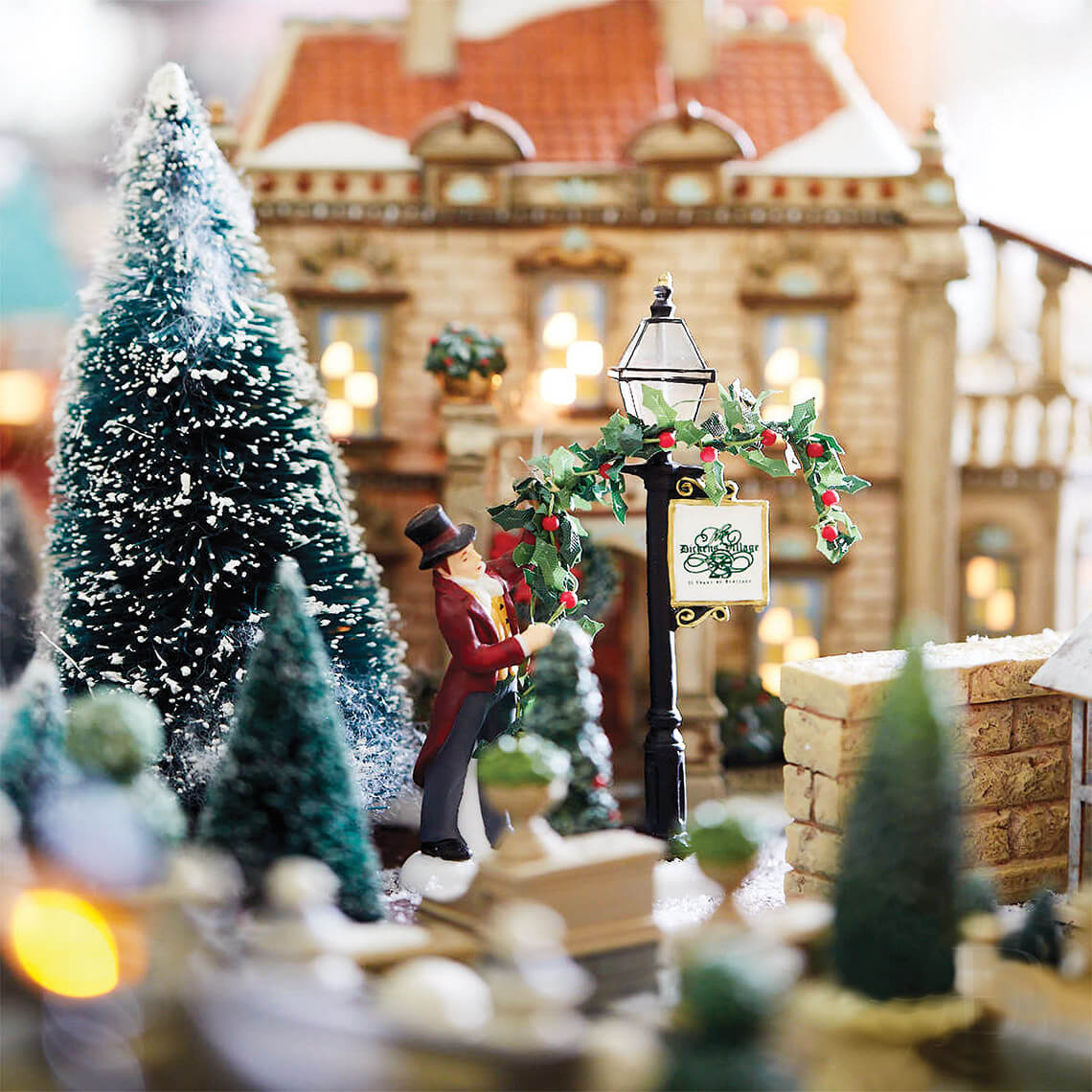 Dan has tried to represent as many scenes as possible from the 1954 film version of A Christmas Carol — his favorite — but many vignettes simply add color and life to his interpretation of 19th-century London. photograph by Stacey Van Berkel

Then, in the ’70s, they watched a 1951 film adaptation of the story, a version that seems to capture the bitter cold and grainy black and white of London in the 19th century. Dan’s aging parents still in their chairs, he and his brother still watching from the floor. While the snow fell outside their own warm home, they watched the snow fall in London as Ebenezer Scrooge saw his past, present, and future in the company of some very stern ghosts.

But he’s about done with it now. He needs to fix the train, but to do that he’d have to take the entire village apart. He recently put in a golfing green along one side of the Thames, but there isn’t room for anything else. You can’t close the doors to the living room as it is. 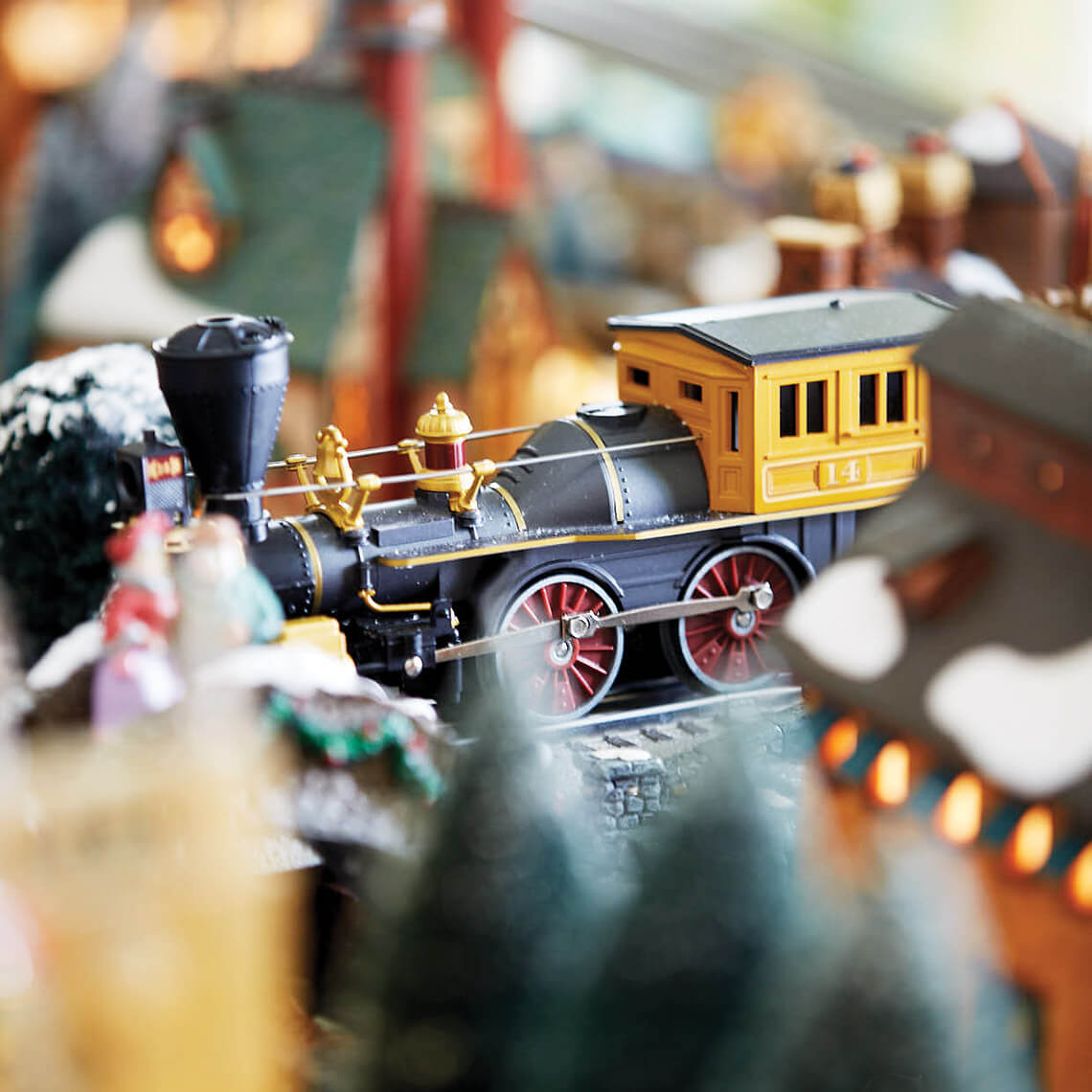 There is even a Lionel model train that runs around the village. photograph by Stacey Van Berkel

He would keep building if he could. The rest of his vision will have to stay in his head, where most all of our memories live, unseen, dimming even to ourselves. But not Dan’s. He keeps his memories on display in his living room, and they are a wonder to behold.

Even the footstone, in Durham, marking the grave of his father, who died in 1982, is inscribed with perhaps the most famous last words in literature: “God Bless Us, Every One.”

Dan sips his coffee and surveys the world he has created. “It could be better,” he says. But you can say that about any world, I guess.