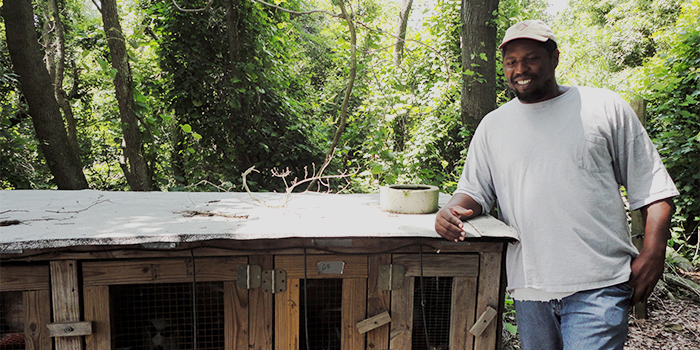 Jay Dixon was born and bred on Greene County tobacco land. For three generations, that farm has served as his family’s livelihood.

It’s where he learned how to coax the sandy loam soil into blooming with vegetables. And now, on that same land, cows and hogs amble happily on pasture.

According to the USDA Census of Agriculture, North Carolina lost 164 farms between 2002 and 2007, which included a loss of over 500,000 acres of farmland.

While the work isn’t hard for Jay, sustaining it is. He wanted to create a more sustainable model – both environmentally and economically.

With a grant from the Rural Advancement Foundation International-USA (RAFI)’s Tobacco Communities Reinvestment Fund, the Dixons were able to expand their pasture operation.

He and his wife Pamela sell produce and meat almost every day from their farm stand. Statistically speaking, this makes sense: the same census saw the value of direct sales to consumers by N.C. farmers increasing almost 60 percent in that span of five years.

But it also speaks to our foodways here in the South, where a farm stand is how you shop in the “deep country,” as Pamela puts it.

For Jay to stay put in his birthplace of Grifton, he needed to make his niche meat products available and accessible to his hometown community.

“The majority of my customers and my county are in the lower-income bracket,” he says. “To eat pasture-raised foods—they can’t afford it, especially with cash.”

The Dixons added an EBT machine at the farm stand to accept payment from folks using the federal Supplemental Nutrition Assistance Program (SNAP).

According to the Central and Eastern Food Bank of North Carolina, Greene County is among 34 N.C. counties where more than 560,000 people struggle each to provide enough food for their families.

“With the food I give them, I can guarantee it to be clean. I want to make good, clean food accessible,” says Jay. “My stuff’s better than what’s in the grocery store. Hands down. There’s no comparison.”

Jay quickly realized that in his county, as in most rural areas, many people who use SNAP/EBT couldn’t afford a vehicle. So, even though he works a second job to pay his own bills, he spent a little extra money to buy a mobile EBT machine. He delivers his produce, eggs, and meat biweekly to 100 customers. He says 50 of those use EBT.

Check out the video above for more about Dixon Family Farms. And if you get your hands on a rack of their ribs, try Pamela’s fool-proof recipe:

Preheat the oven to 375 degrees.

Rub the ribs with crushed red pepper, salt and black pepper to taste. Place them in a roasting pan.

Add the water, vinegar, hot sauce and butter to the pan and cover. Let it slow cook for 2 hours and 15 minutes.

Victoria Bouloubasis is the Communications and Development Manager for the Rural Advancement Foundation International-USA (RAFI-USA). She is also a freelance contributor to Independent Weekly.