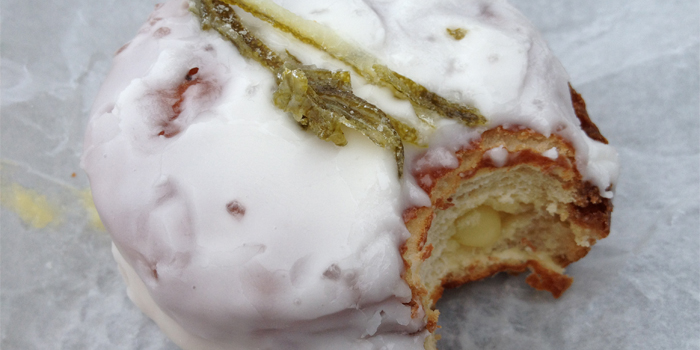 Chances are you’ve had a glazed doughnut. I’d even bet you’ve indulged in one frosted with chocolate or filled with a sweet jelly.

But have you ever had a Margarita, Pineapple Basil, Maple Bacon Bourbon, or Chocolate Chai doughnut? If you’re looking for interesting and eclectic flavors of doughnuts in Durham, two new doughnut shops are pushing boundaries by creating innovative flavors like these alongside classics.

After hosting multiple tastings, Rise Biscuits and Donuts opened a store near Southpoint Mall in December 2012. Tom Ferguson, owner of Rise and Durham Catering Company, wanted to open a biscuit shop after selling his food truck Only Burger. He sees doughnuts as a perfect complement to the biscuits he wanted to offer.

When it comes to developing new flavors, Ferguson believes, “Almost anything you think of food-wise can be turned into a doughnut, or you can try to figure it out.” He adds, “We try not to be too refined, but also try not to be too shoot-from-the-hip – somewhere in the middle there.”

Before opening Rise, Ferguson and his head baker took a week-long tour of doughnut and biscuit shops through seven cities. They looked at the flavors offered, as well as the counter service. The playfulness of Oregon’s Voodoo Donuts, the professionalism of New York’s Doughnut Plant, and the mouth pull of Texas’s Round Rock Donuts inspired Ferguson.

—
Lindsay Moriarty was drawn to the creative and innovative possibilities doughnuts offer. She started selling doughnuts in Durham on her custom tricycle in 2011 and on Saturdays at the Durham Farmer’s Market. Repeated sold out weekends led her to open Monuts in February 2013, located downtown on Parish Street.

“The one thing that I always try to do is to think of flavors that will help counter the sweetness of doughnuts since they are so inherently sweet,” Moriarty says. “I get a lot of inspiration from savory dishes.”

“Maple Bacon Bourbon and Chocolate Salt and Pepper were two of our first flavors.” Moriarty tries to add a twist to traditional options. “People are very familiar with having sea salt on chocolate, so why not pepper?” A few other originals she stills offers include Toasted Amaretto and Chocolate Earl Grey..

Monuts recently caught the attention of Canada’s Food Network for their show “Donut Wars.” Moriarty says the show’s producers were looking for people who had engaging stories, as well as flavors, that would compete well.

The flavors these two doughnuts shops offer are what set them apart. Here is a brief overview a few of their most innovative options. 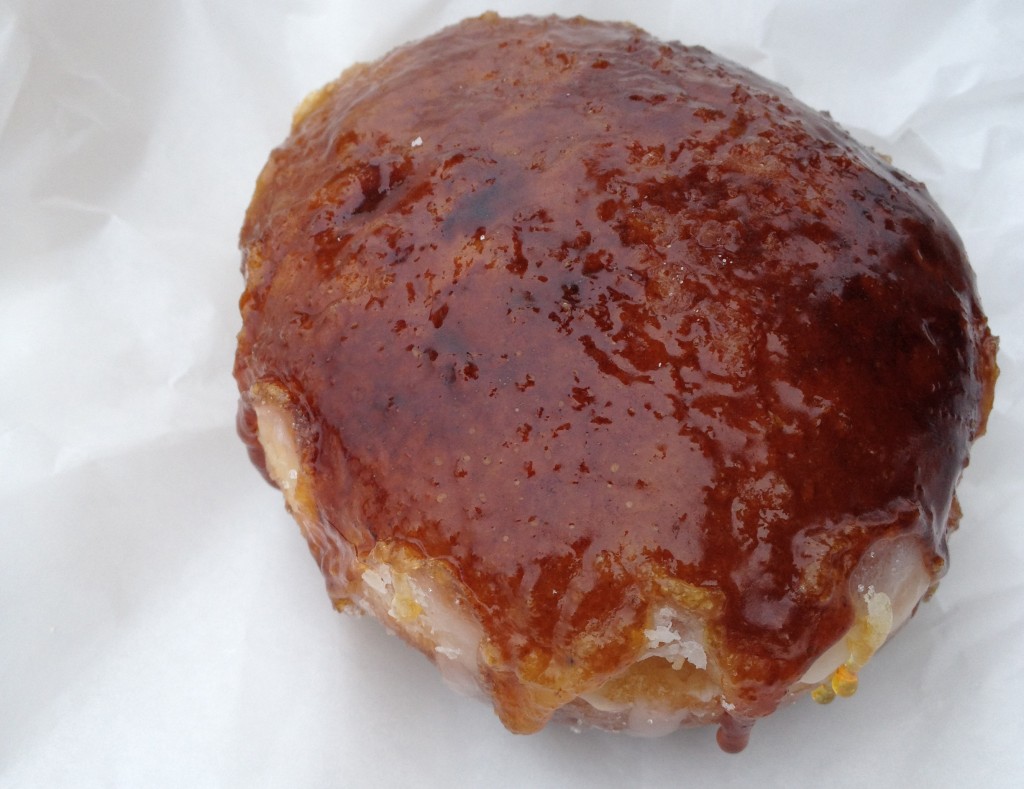 Pineapple Glaze with Basil Cream: A yeast donut with a pineapple glaze (cooked in butter and brown sugar, and pureed with powdered sugar) and a basil filling (steeped in cream) with pistachios on top. Inspired by a dessert Ferguson had at a culinary school’s dinner, he says it’s popular with foodies.

Margarita: A yeast doughnut filled with lime curd, glazed with tequila and salt, and topped with candied lime. This flavor was developed by Rise’s new head baker.

The North Carolinian: A yeast doughnut made with sweet potatoes and a bourbon glaze that includes salt and cinnamon. Moriarty strives to be as innovative with her yeast doughnuts as she is with her cake doughnuts. “I’m always looking for new yeast doughnut varieties that are just more consistent and more in line with the flavor profiles that I’m able to build with the cake doughnuts, which hold better flavors in the donut.” She believes this one does just that. 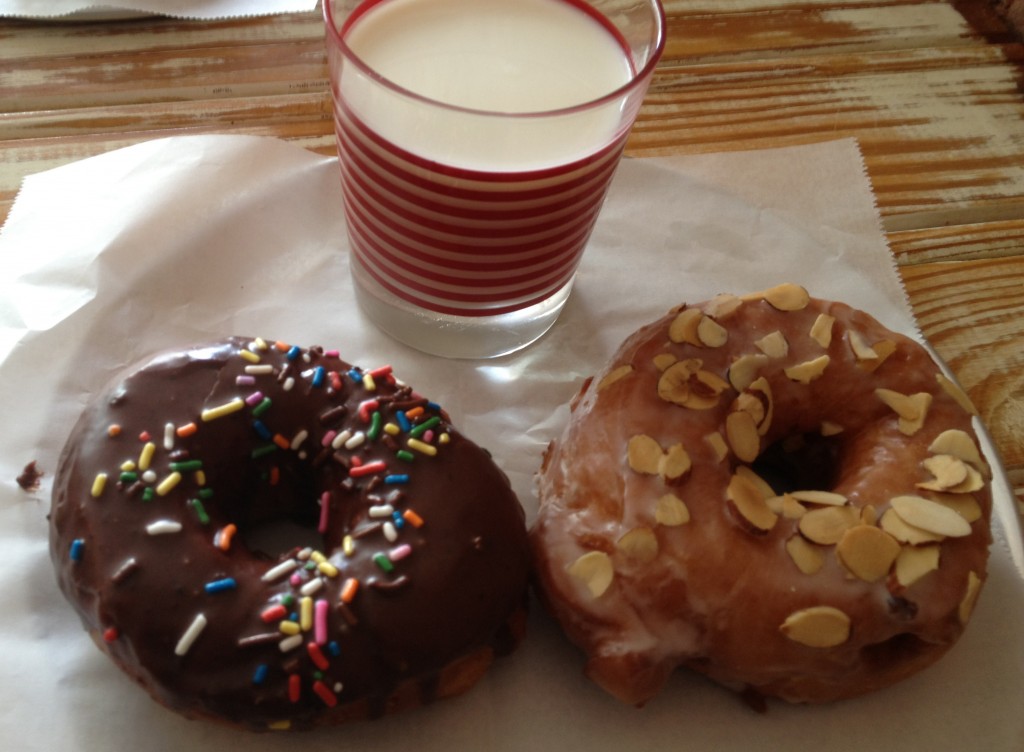 Chocolate with Sprinkles and Toasted Amaretto from Monuts

Chocolate Chai: Moriarty describes this as “a double-spoon chocolate cake doughnut that’s not very sweet. We built the glaze around the flavors that you find in Chai tea.” Notably, Monuts developed their own Chai blend of spices they grind and use in this recipe.

Coconut Dream: A cake doughnut with a coconut glaze and streusel crumble on top. “When I was thinking of how to incorporate coconut I knew that I didn’t want to do it as a filling.” She feels this offers the flavor of coconut without the need for coconut flakes, a texture some people don’t like.

—
Ferguson and Moriarty admit there are some flavors that haven’t caught on. For Rise it was a strawberry doughnut filled with a dark chocolate cream. For Monuts there was one made with green tea, and another with honey and toasted sesame seeds.

Seasonal flavors also interest both. Rise uses strawberries, and plans to use other berries and stone fruits when they are in season. To celebrate the Kentucky Derby, Rise offered a Mint Julep doughnut and Monuts offered a Blackberry Julep doughnut. Monuts also hopes to bring back their Blueberry Cabernet doughnut this summer. In the fall, they’ll use warming spices, pumpkin, and apple to fit the season.

If your taste buds are up for something new, visit Durham and give these two new doughnut shops a try.