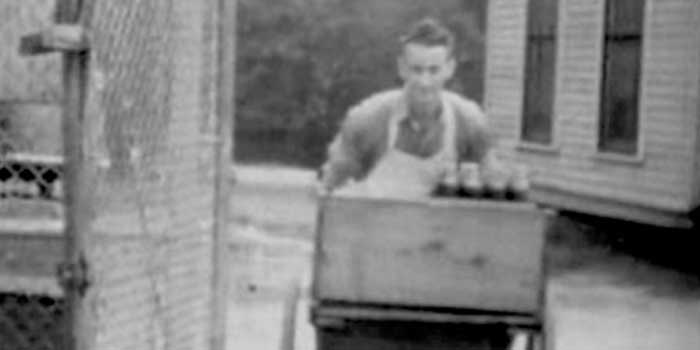 The days were long. The conditions were hot. And the workers were worn-out. In the 1920s, inside the cotton mills of Charlotte and neighboring textile towns, workers eagerly awaited the arrival of contraptions called dope wagons.

A sort of concession stand on wheels, the handmade wagons brought relief from the heat and humidity of the factories before the introduction of vending machines. They arrived with homemade sandwiches, crackers, candy bars, cigarettes, headache powders, and the most popular item of all: ice-cold dopes.

Mill workers in the South referred to cold, caffeinated beverages as dopes. Historians don’t know for certain the origin of the name, but they suspect it comes from popular lore that the original Coca-Cola recipe contained extracts of cocaine.

“Without question, there was tincture of cocaine in the original Coke, whether or not it was addictive,” says Tom Hanchett, staff historian at the Levine Museum of the New South in Charlotte. “In folklore, clearly there was the notion that these things would make you feel better.”

Several soft drinks originated in the South. Factories were hot and hours long in the nonunion Southern states. Cotton needs a moist, warm climate to make it easier to spin, so mill managers often bricked over windows and installed climate-control systems — which were good for the cotton, but tough on the workers.

“Caffeinated beverages were so popular here because after the long hours working on those mill machines, you wanted a pick-me-up,” Hanchett says. “The dopes and the dope wagons are not specific to Charlotte, but Charlotte was the trading center of the textile-manufacturing belt.”

Pepsi-Cola, which a New Bern pharmacist created in 1898, granted one of its first franchises to Charlotte because of the city’s central location among surrounding mill towns. Nearby Gastonia had two competing bottling plants: Spindle City Beverages and The Original 3 Centa Drink — a bargain compared to pricier 5-cent brands.

And the drink that gave the wagons their names, Coca-Cola, originated in Atlanta, Georgia, but Charlotte’s Coca-Cola Consolidated became the world’s largest Coke bottler.

In the early days of Southern textile mills, workers got an hour off for lunch, and most of them walked home to eat, says Lynn Rumley, director of the Textile Heritage Center in Cooleemee. The mills and their machines shut down for that hour.

Then, in the late ’20s and ’30s, came the stretch-outs, when managers ordered workers to speed up production. By World War II, workers barely received a half-hour break, so the dope wagons brought the food and drinks to them. Many of the mills kept the machinery running even while the employees ate.

“You stayed pretty close to the machines and tried to keep the lint off your sandwich,” Rumley says.

For workers, dopes became a welcome and affordable treat.

Few dope wagons looked alike. Workers pulled together a hodgepodge of spare wood and discarded metal parts and pushed the carts through the mills on old car wheels. But the carts shared one important characteristic: Each contained a box, usually lined with tin or steel, filled with bottled drinks and lots of ice.

Because more than anything, after laboring in a hot, humid mill, nothing tasted better than an ice-cold dope.

Elizabeth Leland, an author and award-winning journalist, enjoys writing about the people and places of North Carolina for The Charlotte Observer.