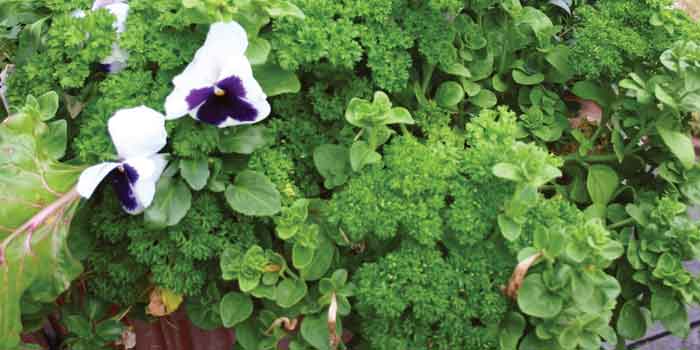 To some gardeners, herbs are second-class plants — grown only if there’s room left over in the vegetable or flower garden. And, due to the lack of space in many urban landscapes, a separate herb garden is often out of the question. But before you dismiss the notion of growing your own herbs this spring because you’re short on space, consider an odd, yet viable, possibility: using herbs as landscape plants.

For an aggressive ground cover in sunny spots, just about any of the mints will compete with the most persistent weeds for space. Whether it is the common peppermint or spearmint, or fancy-scented, low-growing selections like curly, Egyptian, apple, or blue balsam mint, these fast-spreading plants also add to the charm of a landscape setting by releasing their marvelous scents when they’re stepped on or brushed up against.

For a less invasive low-grower, consider creeping rosemary, which is also a good choice to hold down soil on a dry, sunny hill. With a mature height of around 18 inches, ‘Prostratus’ is the cultivar most often associated with being creeping rosemary, but there are other, slightly taller, wide-spreading selections like ‘Irene’ and ‘Huntington Carpet’ that will also perform well as a medium-height ground cover.

Some of the low-growing thymes are excellent for filling in tight spaces. One variety, wooly thyme, stays very low to the ground — about an inch tall or less — and is even tough enough to be used as filler between pathway stones or bricks. Although considered more of an ornamental than an edible plant, it is quite durable, and when stepped on, it releases a distinctive thyme fragrance. ‘Elfin’ creeping thyme is also a ground hugger, while mother of thyme and caraway thyme grow slightly taller (up to three inches) and can be used on walkways or as a garden ground cover as well.

There are even herbs that can help cover bare spots in lightly shaded areas. Corsican mint grows only one-half inch tall, but, if given plenty of water and some winter protection (it is hardy down to 20 degrees), it will spread rapidly in shady spots. If you need a more pronounced ground cover where the sun doesn’t shine, sweet woodruff grows taller (up to six inches) and will do well in the shade if planted in rich soil.

For a small bush that makes scents (pun intended), consider common rosemary. Upright growing rosemary is a good choice for a short shrub in a sunny location. If not tip-pruned yearly, however, it can have an open habit, but its pleasing fragrance also has a habit of opening up the sinuses when the plant is brushed.

‘Arp’ is probably the best rosemary to use as a double-duty herb because it is one of the hardiest selections, surviving typical winters in our state to eventually reach a height of up to four feet. ‘Salem’ is another hardy cultivar, but it reaches only a little over two feet in height.

For a light screen, a concentration of bronze fennel plants will create a feathery veil in the landscape. These four- to five-foot-tall plants also make nice accent plants, and in addition, their dark coloring can provide an excellent contrast for bright flowering plants.

Purple basil (in particular the cultivars ‘Purple Ruffles’ and ‘Red Rubin’) can cast an even deeper hue to complement splashy annual flowers such as zinnias, celosias, and marigolds. If planted early in the spring (just after the last predicted frost), purple basil will grow into a three-foot plant that is hard to miss in an ornamental bed. A slightly more subdued selection is ‘African Blue,’ a three-footer with purple and green leaves on purple stems. For an all-green basil of equal height, ‘Lemon Sweet Dani’ is a good choice.

For borders and edgings, your imagination is the only limit for using herbs. For instance, don’t hesitate to incorporate the fennel-like feathery qualities of dill into a perennial bed. In addition, the typical oregano plant is a handsome specimen worthy of ornamental status; but for more zing, try the eye-catching golden creeping oregano (also known as the cultivar ‘Aureum’).

Chives might be delicious in omelettes, but their rounded purple or white bloom heads are a delight to see massed together in a garden. They also readily reseed, so they can quickly fill in bare spots in a flower bed.

Another great addition to omelettes, parsley doesn’t have the conspicuous flower show of chives, but any of the curled-leaf selections can add distinctive, bright-green foliar interest to the front of an early spring flower border or a cool-season potted planting.

A big plus for most herbs doubling as ornamentals is the fact that they are low-maintenance plants. And the less fuss you make over them, usually the better they turn out — excessive fertilizer and water tend to be counterproductive to many herbs.