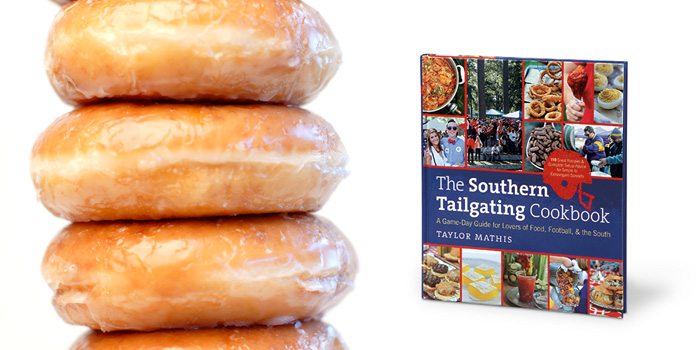 French toast is usually day-old bread battered in an egg wash and then pan fried until golden brown. To celebrate game day, I prefer a sweeter version. Inspired by Wake Forest fans, I like to make Doughnut French Toast. Winston-Salem, North Carolina, is home to Wake Forest University and is the birthplace of Krispy Kreme Doughnuts. When sliced in half, dunked in an egg wash, and cooked until golden brown, this hot, sweet, and sticky doughnut is the best French toast you could imagine!

The night before the tailgate, cut the doughnuts in half, creating 12 discs. Store in a sealed, airtight bag. Add the half-and-half, milk, eggs, vanilla extract, confectioners’ sugar, and salt to a sealable container. Store in the refrigerator overnight.

To make the Raspberry Syrup, add the berries, sugar, lemon juice, and salt to a medium-sized pot. Heat over low, stirring occasionally until the berries have thawed and the sugar has dissolved. Increase heat to medium and simmer, stirring frequently, for 10 minutes.

Remove from heat. Run the syrup through a fine mesh strainer to remove all large pieces of berry and the seeds. Add the butter and stir until the syrup and butter are blended. Let cool and transfer to a plastic squeeze bottle.

At the tailgate, stir the egg and milk mixture. Grease a pan or griddle with butter or nonstick cooking spray and place over a burner on medium heat. Place the doughnut halves in the egg-wash mixture, cut-side down. Soak the doughnuts in the mixture for a few seconds. Turn them over and lightly wet the other side. Place each doughnut half, cut-side down, on the hot cooking surface. Cook for a minute or two until light brown. Using a spatula, flip it and briefly cook the other side. Serve with Raspberry Syrup.

From The Southern Tailgating Cookbook: A Game-Day Guide for Lovers of Food, Football, and the South by Taylor Mathis. Text and photographs copyright © 2013 by Jeffrey Taylor Mathis. Used by permission of the University of North Carolina Press. www.uncpress.unc.edu.