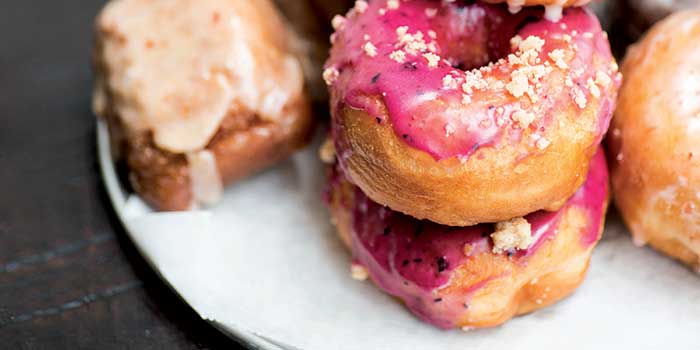 Baker Brian Avery rides his bicycle through the dark of 4 a.m. each morning on his way to Loaf, where he clears out the ashes from the bakery’s brick oven and starts the day’s first sourdoughs.

By 6 a.m., the air inside Loaf is a little smoky as Avery opens the oven’s door and slides in a giant wooden peel, moving loaves of bread from the back, where the oven is hottest, to the front, where it’s cooler. The fire that fuels the wood-fired oven has been out since last night, but the heat that soaked into the bricks is more than enough for the day’s baking.

“It’s very rewarding to see simple ingredients go from what they are to that,” Avery says, motioning to a rack where 30 signature Market loaves are cooling. They look ancient and gorgeous with dark, textured crusts; their insides are creamy with a sourdough tang. Each loaf is so singly beautiful, you want to position a few around your kitchen at home.

Husband and wife Ron and Jaimie Graff are the scientists-cum-bakers behind Loaf. They moved to Durham for Ron to complete postdoctoral work in neurobiology, but eventually they became more interested in bread making. “The way you can completely change a bread’s flavor profile by adjusting fermentation times and yeast cultures appealed to my geekiness,” Ron says.

Now the couple’s baked goods have a following. Manager Mary Turner is apt to sell an entire tray of pain au chocolat within the first quarter of 7 o’clock. And the early birds are right — it’s worth your time to catch a pain aux raisins warm from the oven. A delicate crust, golden raisins, and vanilla crème make the pastry an indulgent way to start the day.

Loaf is one of several new food businesses that are revitalizing downtown Durham. Many of the city’s best-loved bakeries are clustered downtown within a few blocks of each other in what some folks are calling the Durham Bakery District. For instance, within a minute’s walk of Loaf is Monuts Donuts, where a line forms for its doughnuts and sandwiches by 9 a.m.

“We’re trying to recruit her to move to Durham,” Gleason says, and part of that involves eating around town. The family shares a chocolate-bacon-peanut doughnut, and Gleason’s 2-year-old takes a bite of a chocolate chai doughnut.

“I think Durham has a sweet tooth,” says Lindsay Moriarty, proprietor of Monuts. A Florida native, Moriarty came to the area with her sights set on a career in public health, but instead got into the food scene. “The second we got involved in the food community people started helping us,” Moriarty says. She says it’s fun being part of the bakery district: “It’s not unusual for us to have to go to Loaf to borrow something, or for someone from Scratch to come over on a Saturday morning to borrow a cup of sugar.”

Scratch Bakery doesn’t open till 7:30 a.m., but when it does, try the chocolate chess pie — if you can get your hands on it. And if you’re not a pie person, get a crostada. Just be sure to acquaint yourself with a Scratch-made crust. It might play a supporting role under Meyer lemons or tomatoes, but notice how perfect it is on its own: well-built and subtle, buttery and none too sweet.

Scratch, like Loaf and Monuts Donuts, built a following for its baked goods at the Durham Farmers’ Market before opening a shop. Scratch and Loaf sold from traditional stalls — they still do — while Monuts operated from a yellow tricycle parked among the food trucks.

One block up from the Farmers’ Market, DaisyCakes (which got its start in an Airstream trailer brought from New Bern) lays out the morning’s baking in a glass case that tempts your stomach all the way to the cashier. Do you choose the pert, texturally intriguing pink macarons? Do you skip over to the lunch menu for the curried tofu scramble?

A slice of almond brioche, available year-round, is highly recommended. “I think we perfected it,” says proprietor Tanya Catolos, commenting that each of the downtown bakeries does something that the others don’t. “We all have room for our specialty,” she says. “There’s enough demand.”

The one that started it all

On the topic of bakers rising early, no one has a claim on early like Ninth Street Bakery. The bakery opened downtown in 1992, long before there was a bakery district downtown. “There was no foot traffic,” founder Frank Ferrell says. “Ninth Street was dead as a doornail and downtown was even deader.”

Ferrell and his wife, Maureen, learned the art of baking while living with a Zen community in California. When they decided to strike out on their own in Maureen’s home state, North Carolina, they fell in love with Durham. So they opened a wholesale bakery on Ninth Street in 1981, and later moved it downtown. Along with the former Magnolia Grill and Wellspring Grocery, Ninth Street Bakery was one of Durham’s food pioneers in the 1980s.

Ferrell recently retired from the bakery, but not before helping it adapt to the awakening city around it by shifting its focus to retail, serving baked goods and sandwiches to customers who walk by. And the gardens he planted in the parking lot allow the bakery to cook with fresh, seasonal ingredients. “North Carolina has a great climate — a long growing season, lots of rain, vegetable crops in the spring, summer, and fall. I think that’s the basis for the food renaissance here,” Ferrell says.

In Durham, another reason for hope is the cooperative spirit among bakeries. Ninth Street lends out its kitchen to one of its bakers, Matt Props, who turns the place into a pop-up vegan restaurant on Saturday nights. Ron Graff started Loaf in a similar way, getting his sourdoughs ready for the Farmers’ Market in the borrowed oven of the former Broad Street Café. And before DaisyCakes had a brick-and-mortar home, Tanya Catolos crafted her pastries overnight at the Washington Duke Inn, where she worked her day job as a pastry chef.

This tradition of established bakers lending out their kitchens to young start-ups is part of the ethos of the bakery district. And so it grows.

Hungry now? Find our list of 27 Durham bakeries where you can satisfy your craving at eats.ourstate.com.

Erin Sroka lives in Durham, her hometown, and visits the city’s bakeries whenever she craves something sweet or savory.