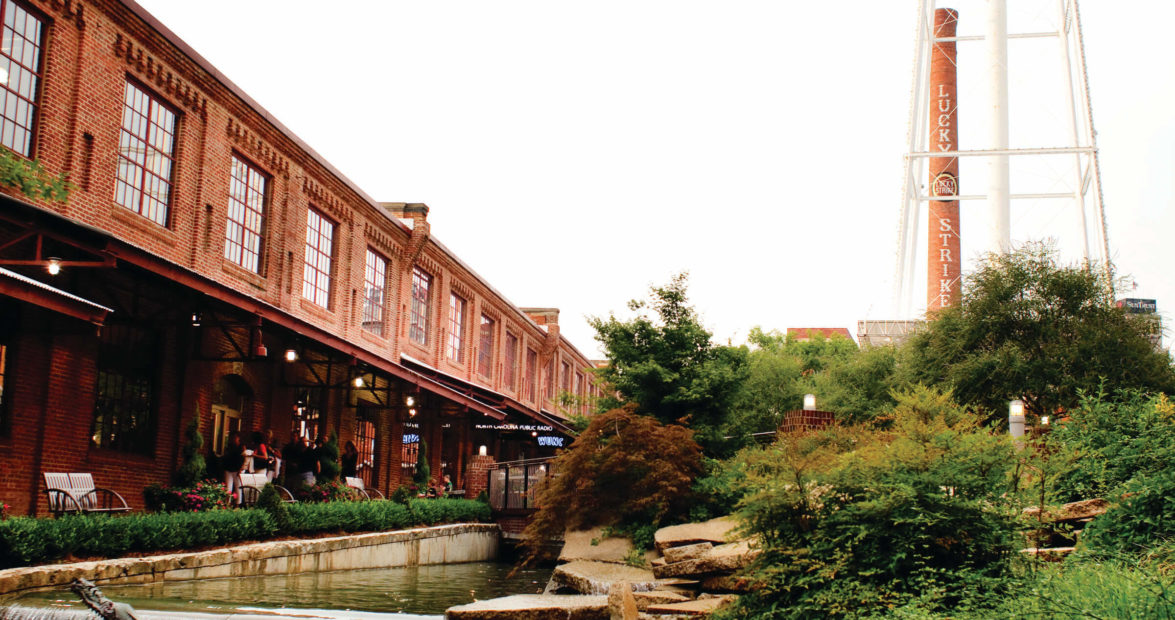 Nearly all the gritty history of Durham — its boxcars loaded with golden leaves, its sweat-stained workers in white aprons, its tycoons, its jobs, its boom, its money, its heartbreak — can be traced to the redbrick warehouses of American Tobacco.

Here, you’ll find the ghosts of men who saw riches glowing at the end of a cigarette, namely James Buchanan Duke, who once manufactured 90 percent of all smokes dangling from American lips.

You’ll hear stories about grandparents who spent their lives inside these hot and dusty buildings, shaking leaves off stems, stuffing Lucky Strikes into packs, filling up lunch buckets with rum-soaked cigarettes that had fallen on the floor.

You’ll see sepia-toned pictures of farmers gone to market to collect a season’s pay, pockets suddenly bulging with money, elbowing their way through a crowd of appliance dealers, snake-oil salesmen, and baby-kissing politicians.

And you’ll know that when The American Tobacco Company abandoned Durham in 1987, taking much of downtown business with it, the city swept a century into the ashcan, grumbling about the surgeon general, puffing on a Lucky.

But perhaps the most fascinating chapter in Durham’s history is unfolding now inside those same buildings, which sat empty for more than a decade. The irony isn’t lost on anyone that tobacco, which for so long helped fuel the Bull City’s image as a haven for sin, is providing a new wave of lifeblood.

From the Lucky Strike smokestack, it’s a short walk to the Durham Bulls Athletic Park, or the arm-long beer menu at Tyler’s Restaurant & Taproom, or the new Durham Performing Arts Center, which lures shows right off Broadway.

Instead of dirty workers just off the assembly line, you’ll find brainy tech-nerds inside wide-open offices walled with glass — even the rooms reserved for CEOs. Exposed ductwork runs everywhere, and inside the Powerhouse building, the walkways snake around a colossal coal furnace. Occupancy on the million-plus square-foot campus now stands at 99 percent.

The main reason American Tobacco works, says Michael Goodmon, a vice president of the campus-owning Capitol Broadcasting Co., is that nobody involved had much of an idea what they were getting into.

Had they been real estate developers, instead of the folks who put the nightly news on WRAL, they would have balked at spending more than six years rebuilding a century-old industrial wasteland based around a product so prohibited you could hardly smoke it on the property.

A normal developer wouldn’t have built a quarter-mile artificial river through the middle of an office complex, or completed that river with jagged concrete chunks that act as stepping stones, just to enhance the theme.

They wouldn’t have taken such care to preserve the nuts-and-bolts factory look of the place, which earned them both tax credits and admiration and helped lure some of the old life back to downtown.

“We actually aged the concrete to make it look old,” Goodmon says. “We knew we needed a natural wonder. We needed a volcano or a tornado. We knew this could be a very special place.”

From one age to the next

The first time Capitol Broadcasting CEO Jim Goodmon peeked inside the old warehouses, they were pitch black and coated with the droppings from a thousand pigeons. What few windows they had were boarded up. The only people to use the old buildings in recent memory had been a police S.W.A.T. team conducting drills.

But in the ’90s, Capitol Broadcasting enjoyed huge success with the Durham Bulls’ new downtown stadium and Diamond View I offices built just beyond the outfield wall alongside the smoke-puffing mascot. Real estate, the Goodmon family figured, would be easy.

Add them to a long line of dreamers that occupied the same spot, starting in 1874.

In that year, W.T. Blackwell plopped down a four-story brick tobacco warehouse, the first of its kind, dwarfing everything in the dusty village that held a railroad station and little else. Such was his faith in the Bull Durham brand made popular by soldiers who first sampled it during the Civil War’s last days.

In that same year, an ex-soldier named Washington Duke moved his family’s rural tobacco farm to a spot just off Durham’s railroad, starting an empire that would later consume all rivals. Duke had walked home penniless from the Civil War, a Confederate prisoner in New Bern, and first peddled his leaf from a wagon pulled by a pair of blind mules. But by the move to Durham, he and his sons were putting out 125,000 pounds a year.

Duke’s son, James, known as Buck, did him one better. He moved the company into machine-rolled cigarettes, and he merged his competitors into a giant tobacco trust that only the federal government could slow down. Most of the buildings now on the American Tobacco Campus, including Blackwell’s “Old Bull” building, went up during that 40-year golden age before World War I.

But Blackwell went broke. Buck Duke met his match in the Sherman Antitrust Act. American Tobacco rolled on for decades but finally sputtered out and departed Durham entirely, leaving its warehouses as a tomb for a snuffed-out industry.

Success for a modern downtown Durham was no more certain. Banks wanted preleased space. Led by the Goodmon family, the American Tobacco team landed Duke University, pharmaceutical giants GlaxoSmithKline and Compuware, getting the project over an important hump.

“Dad was the one who could walk into a room and say, ‘I need your help,’” Michael Goodmon says of his father. “And they would say, ‘Yes.’”

The modern campus only opened in 2004 and is already getting written into history.

“The memorials of current civic pride are blocky, bulky brick tobacco factories and warehouses from the Gilded Age, being rapidly converted here in the Silicon Age,” wrote Jim Wise, columnist for The News & Observer in Raleigh and author of Durham Tales.

Work at American Tobacco was never glamorous. You got dirty. You coughed on the job. You worked six days a week.

The Durham County Library is filled with oral histories of the generations who worked there from teenage years to retirement, paying medical bills and buying clothes with American Tobacco paychecks — calling it the best job around, especially if you lacked an education.

“They wanted me to come up and help sweep the floor every evening an hour or hour and a half before quittin’ time,” recalled a worker named Thomas Burt, describing his job in the late 1910s. “I done that for a while, and it give me the worst cold. I just got to coughin’. They all told me, if they was me, they’d quit ’cause that’s dangerous goin’ into TB.”

Still, when American Tobacco announced its departure from Durham, workers lamented it like the death of the family dog.

“It breaks my heart, makes me plum sick,” American Tobacco retiree Mary Rigsbee told The News & Observer in 1986. “I hate it so bad I feel like breaking down and crying, if crying would help.”

These were times when there was hardly any antismoking fervor, when American Tobacco could safely sponsor “Your Hit Parade” on the radio, having Hollywood actors endorse the Lucky Strike brand.

Now, when he walks the campus, Michael Goodmon frequently encounters tour groups (three of them in an hour one recent Friday), and he tells them that during World War II, the entire output of American Tobacco went to soldiers overseas.

But there’s nothing inherently unhealthy about the campus now, unless you count the bleu cheese and bacon burger at Tyler’s or the steak chimichurri at Cuban Revolution Restaurant & Bar. It’s unlikely the surgeon general will ever weigh in on the earth-friendly products made by Burt’s Bees, which moved to American Tobacco last year.

Today, it’s the smaller firms that give American Tobacco its flavor, and the comfort afforded to their employees. At Bronto Software, every inch of flat space is occupied by a green inflatable dinosaur, the firm’s mascot. The walls are stuffed with shredded denim, making them more soundproof, essential for quiet inside Bronto’s airy and wide-open space.

Many of American Tobacco’s modern workers are young, energetic people who wouldn’t work in a box full of cubicles off an interstate. The exposed-ductwork design and the easy access to sandwiches, baseball, the gym, and after-work drinks are meant to keep the talent happy.

Before moving to the campus, the advertising agency McKinney had been holed up inside a downtown Raleigh office tower, spread over five floors. Now it occupies a floor and a half of the Reed building — with more people.

Standing at the entrance, it feels like you can see every person who works there through a pane of glass, including CEO Brad Brinegar. The point is bumping into people accidentally, having a conversation in the hallway that sparks an idea.

“They’re not going to cocoon themselves,” Brinegar says of his employees.

He appreciates the quality of the materials and the attention to historic detail that make the office seem like part cigarette factory and part spaceship, although he knows much of that detail was required for American Tobacco to qualify for tax credits. Still, it’s a place you wouldn’t mind walking into everyday. For one thing, McKinney brews 130,000 cups of free coffee a year — none of it from a vending machine.

It beats sweeping tobacco, coughing into the dust.

Jim Goodmon keeps an office at American Tobacco inside a restored 19th-century railcar, and from there, he can see the giant coal conveyer running inside the Powerhouse building. At one time, American Tobacco created so much power that it helped light Durham on the excess. Michael Goodmon jokes now that, from that perch on the train car, his dad can point out all the projects that are moving too slowly for his taste.

They say that when an odd breeze blows through, you can still smell a trace of the sweet leaf that piled inside these buildings. The smells, the sweat, and the fortunes created here never really left. It doesn’t take much to imagine them sitting on the lawn for Back Porch Music on Friday, clocking out for a few hours to enjoy the show.

In this way, American Tobacco has again become Durham’s beating heart. The characters who inhabit the campus now may dress a little differently, and speak in different accents, but there’s no doubt they’re at the center of Durham, where history keeps happening.