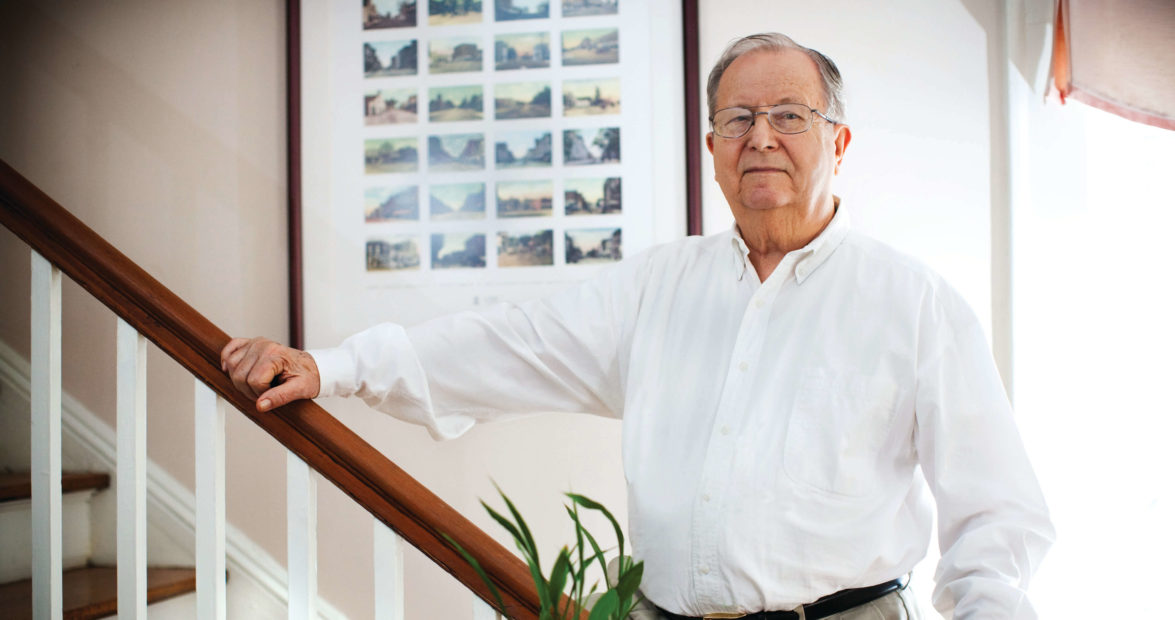 EDITOR’S NOTE: This story first appeared in the February 2010 issue.

Inside photo albums and shoeboxes, Durwood Barbour gathered nearly 8,000 stories of a long-vanished North Carolina: the greasy pig race in Siler City, the barefoot first-graders at the Oxford Orphanage, a pair of elephants parading down Broad Street in Dunn.

From his home in Raleigh, Barbour spent about 25 years hunting down postcards, building a collection so large it included scenes from nearly every town in the state — places like Boonville and Brasstown, rarely mentioned outside a Gazetteer.

He didn’t much like the printed kind, the “Welcome to wherever” variety. Mostly, Barbour looked for pictures of forgotten people, faces that stood out for being so ordinary. Convicts building a railroad in Laurinburg. Farmers with a pair of slaughtered hogs hanging from a pine branch. Gold miners in High Point in 1910, leaning on a hopeful but empty cart.

The idea was to capture a piece of history like a bug in jar, and to marvel at its richness.

“I was always looking for something that told me a story,” says Barbour, 81. “Some lady that’s on the streets of Salisbury or somewhere, trying to oppose Prohibition, or old gold mines, or the first passenger train that backed up into a little mountain town.”

His collection is likely the largest of its kind, worth nearly $200,000, and in 2006, Barbour gave it all for free to the Wilson Library at the University of North Carolina at Chapel Hill — his alma mater.

It didn’t take up much space. As collectibles go, postcards are mostly hassle-free. But he worried about fire. Even with insurance, there’s no replacing a shot of the Kinston Police Dance at Marvin’s Bar & Grill.

So he packed up his cards and passed them on, hoping they would delight thousands more pairs of curious eyes.

It started with a quarter

Nothing about Barbour’s early life offers any hint that one day, he’d pay $575 for a single postcard.

He grew up in the rural flatland of Johnston County, where most everyone grew tobacco and corn on five- and six-acre plots, owning two horses at the most.

Other than a cousin who ventured into business school, Barbour was the first in his family to attend college, and he paid tuition at UNC by growing sweet potatoes back home. When he graduated, a young man with a geology degree, he was happy for a job with the State Highway Commission, where he devised recipes for hot-mix asphalt. Hobbies were a luxury.

“I had never collected anything in my life,” he recalls. “Never could afford to collect anything but ice cream tops with movie stars on the back.”

For Barbour, a lifetime of collecting started with the quarter he bought for $25 in 1967 — a princely sum for a working man with two sons. His wife wondered if he’d lost his wits.

Until then, he’d casually filled a few collectors’ albums with wartime nickels or Wheat pennies. Nothing serious. But for some reason, his eye caught an advertisement for a coin show at Memorial Auditorium in Raleigh, and he spent an afternoon roaming through the dealers’ tables.

He can’t even recall what made the coin so special. It was probably about 100 years old. Maybe the seated liberty quarter with its arrows and rays. What mattered was the story it told, being so old and rare. You could hold it and imagine the hand that must have held it, the pockets where it rested and all the towns that little coin had seen.

Coins got expensive to collect, so Barbour switched to paper money. He bought colonial notes, or 19th-century bills with Bank of Raleigh printed on them. Some just showed off beautiful lithography. Soon, he was combing through shows up and down the East Coast, often twice or three times a month — family in tow.

“My wife likes to travel,” Barbour says. “That was the only way she could get me to go anywhere.”

On those trips, Mary Anne Barbour would notice the boxes of postcards while her husband stewed over bills or coins. On her suggestion, he picked up a few, and with that, his obsession was born.

An eye for detail

Like many collectors, he started with his own hometown: farming scenes from Four Oaks, a concert hall in Smithfield billed as an opera house.

From there he branched out to Chapel Hill, picking up a 1950s-era card of former Chancellor Robert House buying flowers from a group of black women on Franklin Street.

“He’s got his old ball cap on,” Barbour says.

From there, cards poured into Barbour’s collection from all over the state. He started paying $25 apiece for scenes like the dance marathon in south Raleigh in 1933, which not only showed weary dancers hoping to win a few scarce dollars, but also one of the country’s first drive-in movie screens.

Shot by working photographers in the first decades of the 20th century, the best cards were printed in tiny quantities and featured the sort of black-and-white everyman scenes you’d find in a Ken Burns documentary.

Barbour found a shot of a soldier at Camp Greene outside Charlotte circa 1917. He’s tipping his wide-brimmed hat and riding the camp’s bear mascot, grinning like a man who hasn’t yet seen the inside of a trench.

In time, Barbour acquired an eye for cards that were both rare and vivid. The subjects might be women in a state penitentiary, smoking cigarettes and glaring at the camera, or Raleigh kids queuing up to ride a rollercoaster long since torn down. Whoever they were, they spoke across the years.

“It’s just going through thousands and thousands of cards,” says Barbour’s friend, Steve Massengill, a fellow collector who retired from the N.C. State Archives. “He was real good about acquiring not just static postcards of a town scene or a building. He liked to acquire ones that show occupations, things going on, things that told a story.”

Barbour kept his cards in boxes and albums, but he was always arranging them. Even now, the hundreds of cards that can be viewed online are arranged into the narrowest categories: awnings, azaleas, bagpipes, bakeries …

“We have the collector’s gene,” he says. “I think it has something to do with getting your universe in order. There’s a vicarious-living thing to it as well.”

Barbour doesn’t like to mention what his collection is worth. It sounds like boasting. The stories the cards capture are irreplaceable, unlike the money he spent.

But he does relish the story of his most expensive card, which showed three female convicts in striped uniforms. “One of them had a cat on her shoulder,” Barbour says.

He bought it once eBay replaced the postcard show as the main marketplace for collectors, and he spent days in a bidding war until finally winning the auction with a $575 bid.

As soon as he won, Barbour got an email offering him $900, then $1,200. He declined, but after a few months, he relented and took the money. It seemed impractical to have that much money tied up in a piece of paper.

His son cites that as a difference between the two of them. He could never part with a single record in his collection, but Barbour was able to let his treasure go.

Some collectors resented Barbour’s decision to take so many valuable cards out of circulation forever. But with that gesture, Barbour let loose a thousand tiny fragments of forgotten people’s lives, letting them light the imagination of a thousand more to come.