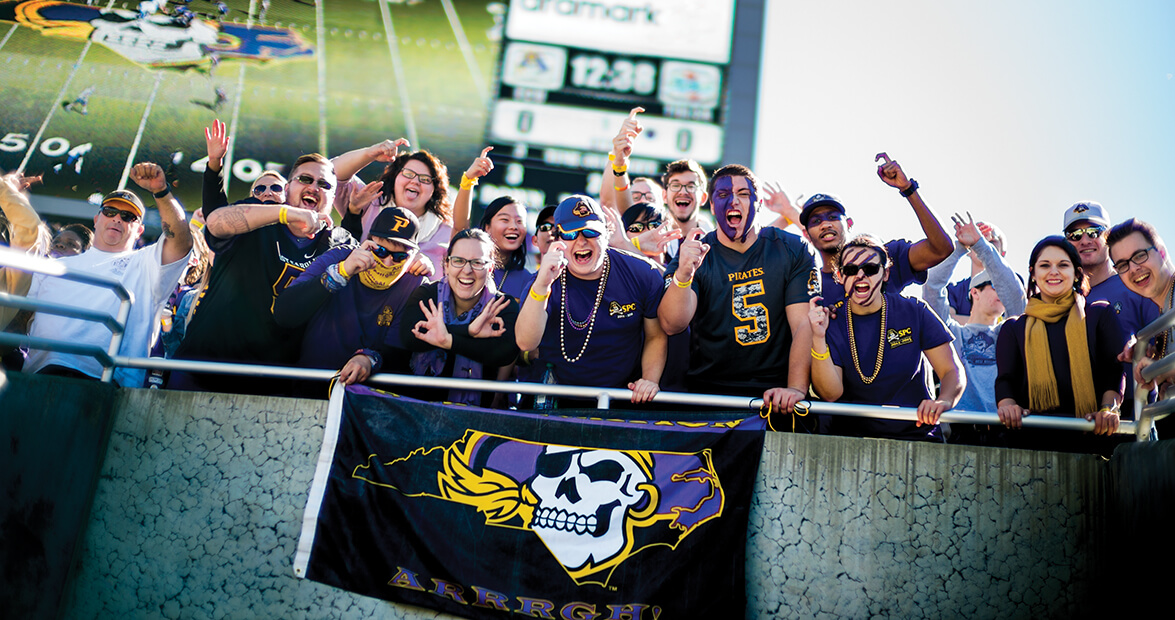 Close your eyes on a fall Saturday morning in Greenville, in the shadow of Dowdy-Ficklen Stadium before a noon kickoff, and you’ll hear a cacophony of voices, thousands of them, old and young, laughing, teasing, hailing. You’ll smell grilled sausage and chicken and buttery biscuits and hash-brown casseroles and boiled peanuts and hickory-smoked pork belly. You’ll open your eyes and gaze at a military arrangement of tents, rising wisps of smoke, and an endless ocean of purple. At that moment, you’ll know that you’re at an East Carolina University football tailgate, but you’ll also realize that you don’t have to know, because you’re in the midst of a very American kind of paradise, and there’s no place like paradise to let yourself drift. Context is unnecessary.

But, of course, the context is there. When you snap out of your pleasant daze, and you begin to know these people, the context is unavoidable. ECU football signifies something beyond the color purple and the hope of victory. There’s a reason all these people are here, a reason this culture thrives. 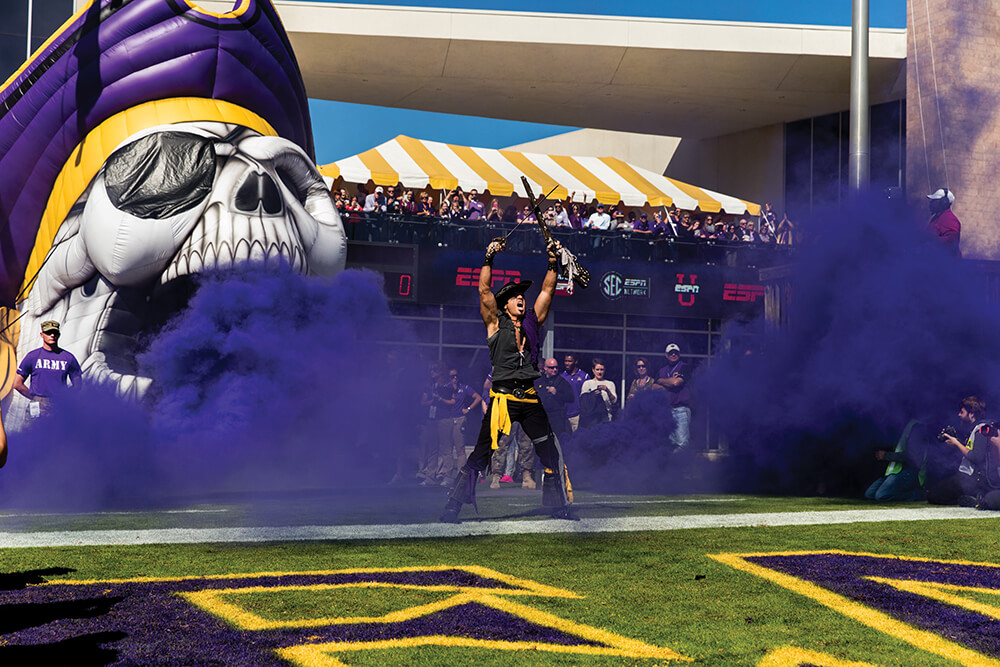 The phrase I heard most often, as I wandered around the massive tailgate outside Dowdy-Ficklen last October, was “chip on our shoulder.” Fans of the ECU Pirates would prefer not to be compared to the more prominent schools in the Research Triangle: UNC, Duke, and NC State. But like it or not, ECU loyalists measure themselves against the juggernauts to the west — and feel that they’re ignored in return. The phrase “chip on our shoulder” comes from a bunker mentality mixed with pride.

And yet, among schools that don’t belong to a Power Five conference, ECU draws the fourth-highest attendance, and the school comes in just a shade behind Carolina and State, despite its base in a city with fewer than 100,000 people (compared to more than two million in Raleigh-Durham-Cary-Chapel Hill) and a stadium with a smaller capacity. Pirate Nation is a fierce fighting force, and they understand that they exist, and sometimes thrive, in the shadow of giants. In more ways than one.

As often happens, sports in North Carolina are, to some degree, a reflection of economics. The stereotypes of Tobacco Road are the most familiar illustration of this phenomenon — NC State represents the farmers and skilled laborers, UNC produces the state’s lawyers and politicians and academics, and Duke is home to those with a future in business and finance. Although these broad categories aren’t fully accurate, they still define each school’s identity, along with their place in the statewide athletic narrative. 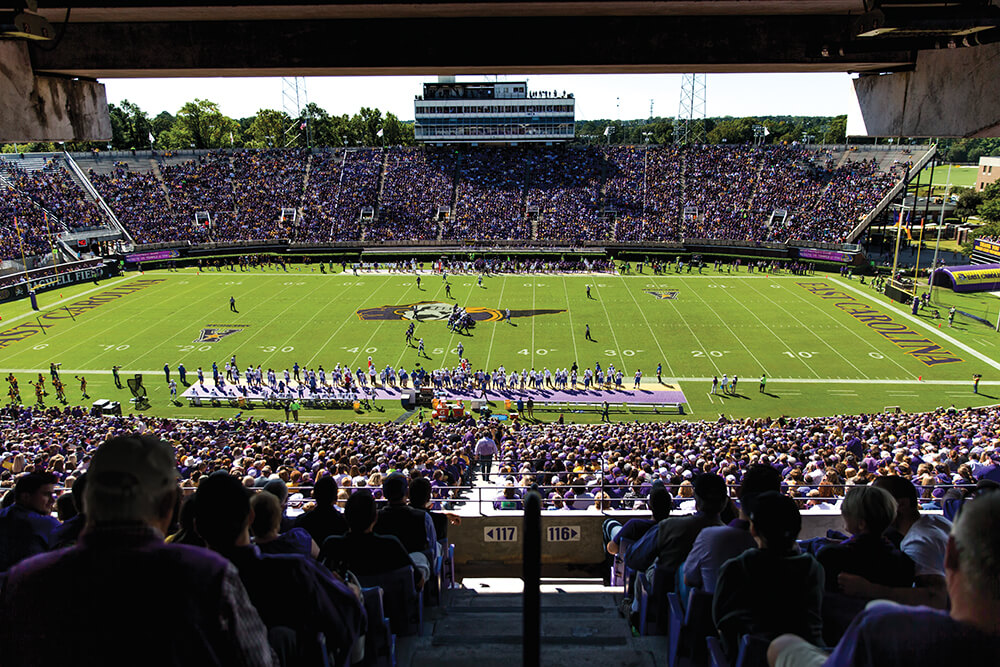 More than 43,000 fans, most in purple and gold, watch East Carolina take on Tulsa during the 2015 homecoming in Greenville. photograph by Charles Harris

ECU, to many of its fans, doesn’t even have a place in that narrative, and that, too, is a story of money. ECU attracts students from all over the state, and the country, but it is inevitably a product of eastern North Carolina, where visible signs of struggle are never too far away.

Don Edwards, the president of the University Book Exchange in Greenville, has worked in some capacity at his store since 1968, but he spends much of his time fighting to revitalize Greenville’s downtown area — replacing rundown bars and abandoned buildings with shops and restaurants and other businesses that contribute to the appearance of a thriving college town. He knows that the fate of his own business, and of the school that supports it, is intricately linked with the fortunes of the city and the region.

ECU wages the same economic battle, and Jeff Compher, the school’s athletic director since 2013, understands that sports play an enormous — even outsized — role in the fight. “Our vision as a university is that we want to win championships and become a national brand so people can know who we are,” he told me on the sidelines of Dowdy-Ficklen, as we watched ECU build a huge lead on Tulsa. “When we came here, we redid the brand to make it consistent. Same font, same logo, and the idea is that when people see it, they say, ‘Oh, that’s ECU. They’re in Greenville, North Carolina.’”

That consistency has an enormous impact on recruiting, which in turn affects athletic success — Compher points to a school like Oregon as an example where strong branding has elevated its athletic program to national prominence. But he goes a step further, noting how football contributes economically to the community, which in turn determines whether new businesses come to the area, and whether the school’s graduates remain near Greenville. This feeds back into the school, and the students, and the football program, and back to Greenville, and so forth. In a perfect world, each piece of this self-sustaining cycle helps the others, and also itself.

Compher knows that a symbiotic relationship between the school and community is vital if Greenville and the surrounding areas are going to grow alongside the university, which now has 28,000 students. That relationship is always on his mind, and influences even the smallest decisions — he will, for instance, all but insist that when coaches take their teams out for a meal, they support the restaurants that support the school.

“When we beat Carolina, the sky over the stadium turned purple at sunset.”

So the proverbial chip on the shoulder among ECU football players, fans, and supporters can be seen as something stronger than a “sense of community.” That phrase implies a voluntary relationship; the situation at ECU is more like a bond of necessity. Without Pirate Nation, the city of Greenville itself would be vulnerable to negative economic currents. This is not a problem that cities like Raleigh or Durham would ever have to face.

Which is why, at ECU, the culture is life. The vibrant bubble around football is less like a loose confederacy of fans, and more like a labor union, where only solidarity ensures their continued existence. You could make the case that a sense of community is never quite tangible until people really depend on each other. At ECU, everyone has a chip on their shoulder. But they also have each other’s backs.

Everyone seems to have a story that proves that theory. Michael Darrow grew up a State fan, but came to ECU for the marching band. At his first games, he and his bandmates were hassled by NC State fans, and he still hasn’t forgotten the memory. “I really took offense to that,” he says. “So I said, I’m a Pirate, man. I never looked back.”

To Darrow, ECU grads are the state’s entrepreneurs — he owns a car dealership in Durham — and their path is partly explained by the big universities in the Triangle. ECU grads may have had trouble getting into those schools, so they come to Greenville knowing they have to work harder, and the ones who succeed become more independent and business-minded. 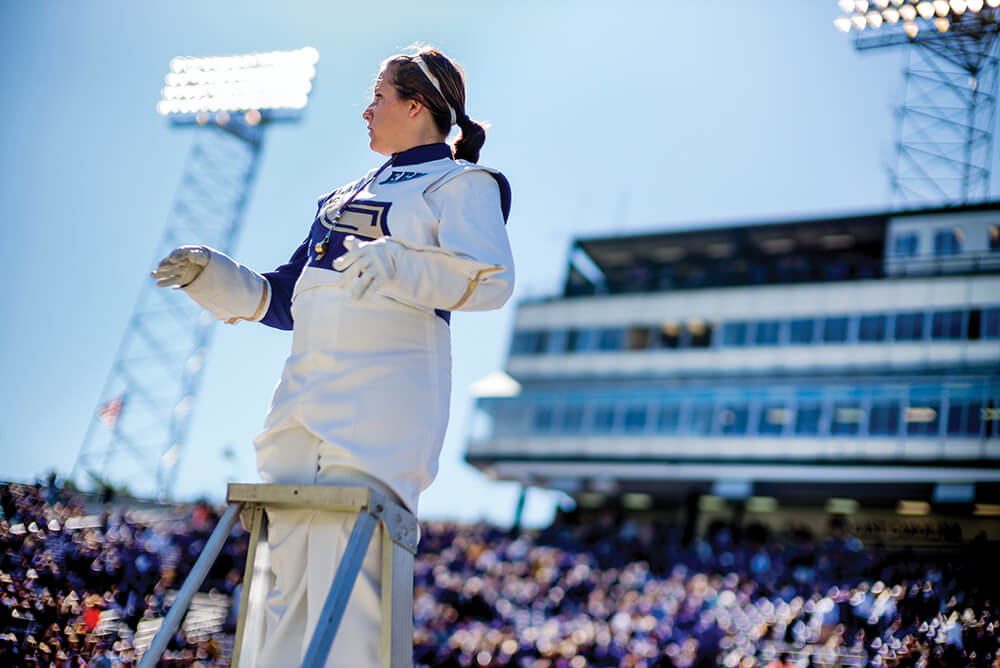 With more than 250 members, the East Carolina Marching Pirates is the largest student organization on campus. Only a fourth of the band consists of music majors. photograph by Charles Harris

I speak with Jim Post, a member of the 1972 and 1973 teams that won the Southern Conference championship and earned the nickname “Wild Dogs” for their top-10 national defense. He and his teammates remember watching a game that ECU won against NC State, and, after the game, overhearing State fans say, “I can’t believe we just lost to a junior college.”

Before the ECU-Tulsa kickoff at noon, Billy Dunn is feeding more than 150 fans, including his children. He jokes with me about how the state legislature nearly had to force UNC to play ECU, and that when the Tar Heels finally conceded, ECU “beat ’em like a drum,” winning 70-41 in 2014.

That victory is also the favorite memory of Matt Kiricoples, who graduated last December. His recollection of the night ECU beat UNC is more vivid. “When we beat Carolina, the sky over the stadium turned purple at sunset,” he says.

The words sound almost mystic, but when Edwards shows me a photo of the famous sunset at the University Book Exchange — an item that became the store’s all-time best- selling photo just two weeks after the game — I see that Kiricoples is right. The sky had transformed from Carolina blue into a dark royal violet. Below was a sea of 51,000 people, in waves of purple and gold. In triumph and in hard times, Pirates always know they have a safety net: Each other.