In January 2004, when a young sperm whale washed up on a remote shore at Cape Lookout, Keith Rittmaster and a team of marine experts went to investigate. As the curator of natural science at the North Carolina Maritime Museum in Beaufort, Rittmaster had seen stranded whales on the NC coast before — about 140 sea mammals wash up each year. But there was something different about this one. Here was the carcass of a 33½-foot mammal, essentially intact, lying on the sand.

Rittmaster and the others began to discuss what should be done with the massive whale, and a veterinarian posed some questions: Could they make something positive of this? Might they learn something new about these great creatures if they stripped down the bones, cleaned them, and reassembled the skeleton? Perhaps it would be possible to put the skeleton on display for the public to see. Imagine the teaching opportunities. The group saw the potential, but they also understood how much work the project would take.

Rittmaster pulled together a team of volunteers to begin the long process. To clean the bones, he used a technique that calls for them to be buried in sandy soil for several years — long enough for insects, microorganisms, chemicals, and temperature to break down all of the tissue. This approach requires patience, he says, but it’s great for getting the bones almost spotless. The bones were checked annually, and finally, four years later, they were exhumed and ready to be reassembled. But there was a problem: Where, exactly, does one go to rearticulate the skeleton of a 33½-foot sperm whale?

“We had no place big enough to put it together,” Rittmaster says. So a bunch of supporters, a private landowner, and some donors pooled their resources to build a structure in the woods specifically for the whale. “We called it Bonehenge,” he says.

“It was truly a community barn-raising effort.” The name is a play on the famous prehistoric Stonehenge in England, and the building process really was a kind of structural wonder. In only eight days in January 2009, 22 volunteers erected a 20-by-40-foot, single-story pole barn on a concrete slab in a patch of woods. It was fully wired with electricity, but also featured plenty of windows for natural light, as well as a 10-by-10-foot rolling door — large enough to remove the skeleton after it was completed.

Where, exactly, does one go to rearticulate the skeleton of a 33½-foot sperm whale?

For three years, Rittmaster and his band of enthusiastic helpers painstakingly reassembled “Echo” — the name later given to the whale in an online naming contest — inside that simple barn. Damaged bones were repaired, and the cleaned bones were soaked in hydrogen peroxide to whiten them. Piece by piece, the skeleton took shape until finally, in March 2012, some eight years after the whale washed up at Cape Lookout, Echo made his public debut at the Maritime Museum, where he still hangs on display today.

Eight more years have passed since then, and another public debut is planned: the unveiling of the new Bonehenge Whale Center in Beaufort, a workshop dedicated to the close relationship between North Carolina and the cetacean order of sea creatures, which includes whales, dolphins, and porpoises. Unlike the little pole barn that inspired this new venture, the center is an open, two-story building, approximately 2,000 square feet, adjacent to the NC Maritime Museum’s Gallants Channel Annex. A few rearticulated dolphins hang from the ceiling, while others are still in the process of being put back together at stations throughout the center. A giant mural along one wall depicts a mother Cuvier’s beaked whale and her calf. A balcony encircles the building’s interior, giving visitors a bird’s-eye view of the work spaces and the displays below. 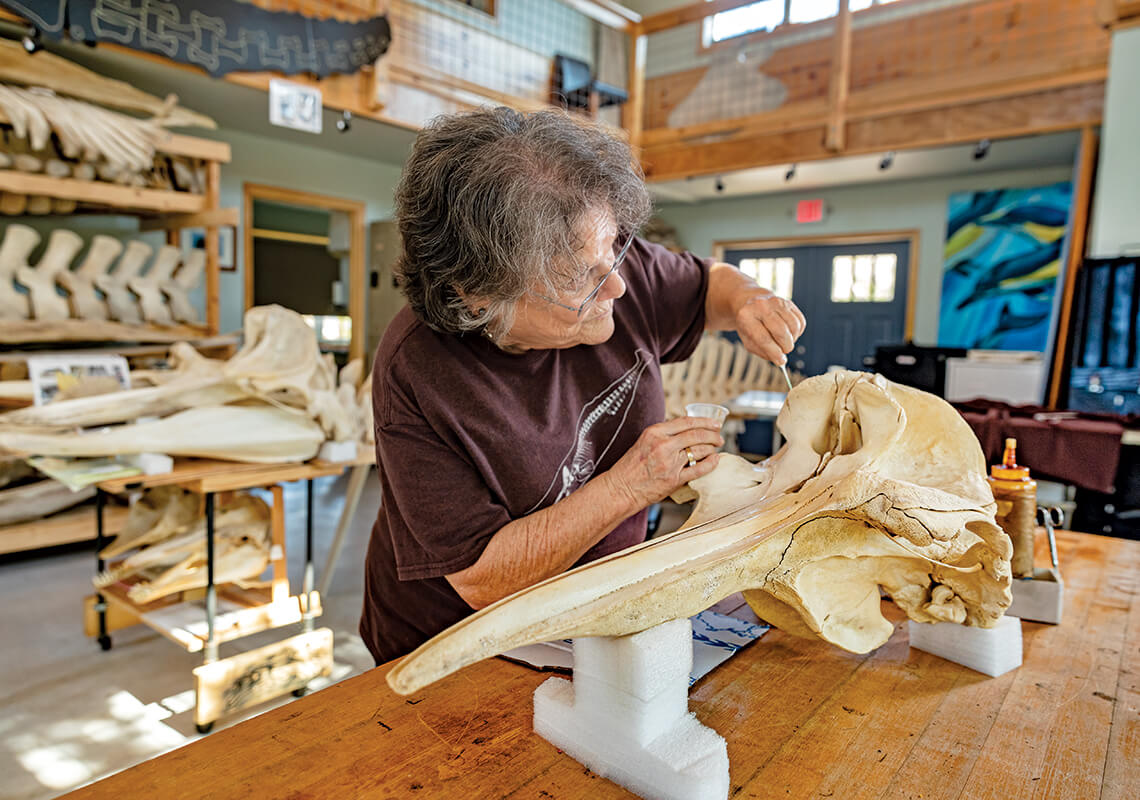 Rittmaster marvels at how the original Bonehenge project laid the groundwork for the second one, which is scheduled to open later this year. “A bunch of us sat around the kitchen table one night, and we decided to see if we could build something bigger and better to support this kind of work,” he says. “Just like with the first Bonehenge, it was another community barn-raising.”

North Carolina’s history with whales dates back to colonial days. Coastal fishermen took advantage of the mammals that stranded themselves along the state’s shoreline, harvesting their carcasses for blubber, oil, meat, and whalebone, which was often used in the manufacture of collar stays and women’s corsets. Eventually, a modest whaling industry developed along the coast and lasted for well over 200 years. One of the most famous whales killed during this era was “Mayflower,” a 50-foot right whale. Brought to shore in 1874, Mayflower’s rearticulated skeleton now hangs on display at the North Carolina Museum of Natural Sciences in Raleigh.

In the early 1900s, the state’s whaling industry died out for several reasons, including overhunting, violent Outer Banks weather, and changing fashions that diminished the desire for whalebone corsets. North Carolina’s fascination with the great creatures, however, apparently never waned. “Here’s something mind-blowing about North Carolina that most people don’t know,” Rittmaster says. “There are about 90 species of cetaceans on Earth, and we have documented 34 of them here in North Carolina. That’s more than any other state in the country. That’s more than all of the states to our north combined, and it’s more than all of the states to our south combined — including Florida, which has over four times the coastline.”

Rittmaster wasn’t always this enthusiastic about whales. Growing up in New Jersey, he liked wildlife, but he didn’t care about anatomy. At 18, though, when he moved to the Outer Banks as a surfer, he developed an affinity for the dolphins he saw swimming around him. Then, he witnessed his first whale stranding, and it changed his life — he pursued a career in the study of marine mammals and landed a job at the Maritime Museum in 1990. Today, he even tools around town with a dorsal fin on top of his car. 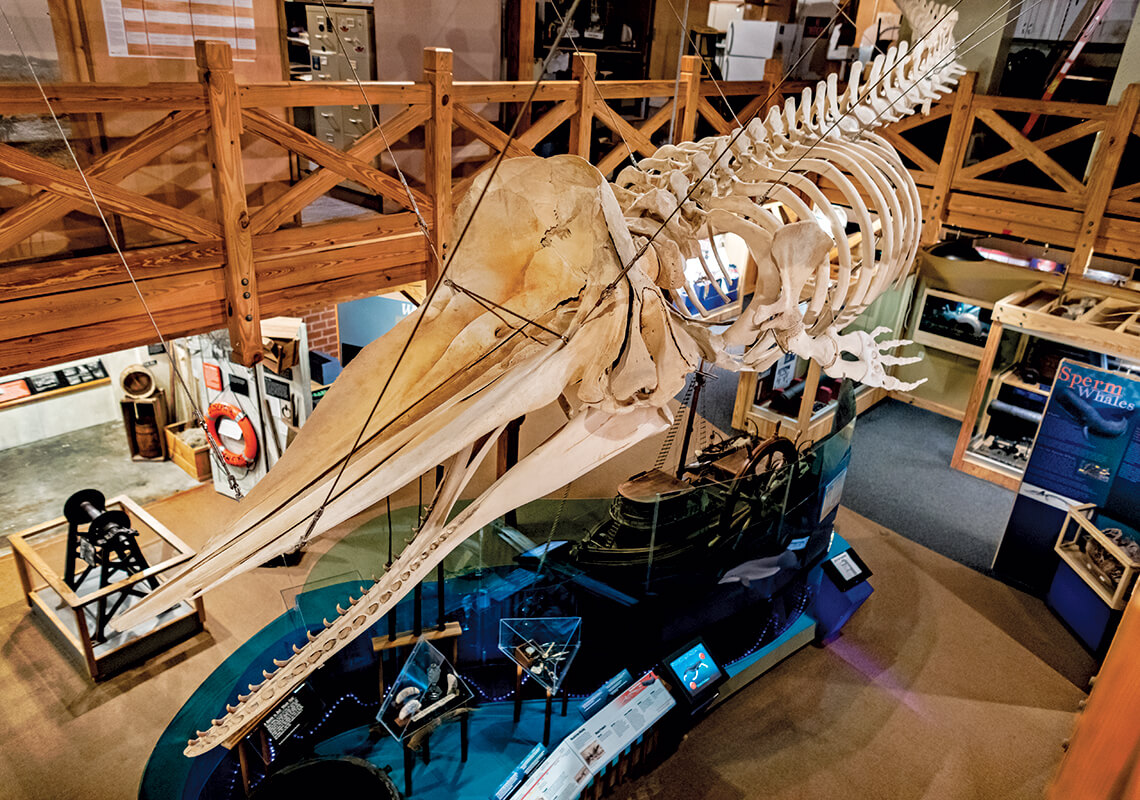 The beloved sperm whale “Echo” hangs above the other displays at the NC Maritime Museum in Beaufort. photograph by Charles Harris

During graduate school at Duke University, Rittmaster met his future wife, Vicky Thayer, who serves as the marine mammal stranding coordinator for North Carolina’s central coast. Together, they have dedicated untold hours to the Marine Mammal Stranding Network, which responds to reports of stranded whales and dolphins. They also founded the NC Monofilament Recovery and Recycling Program, an initiative aimed at ridding the ocean of one of the deadliest killers of whales and dolphins: improperly discarded fishing gear that entangles the unsuspecting animals.

In the past, when whales stranded themselves, they were scavenged for their products. Even today, their bodies are typically disposed of in one of three ways: They’re buried right where they die, they’re towed back out to sea and left to the elements, or they’re exploded. More and more frequently, though, the beached mammals are collected and examined, and given postmortems to understand how they died. While scientists aren’t always able to determine a whale’s cause of death, oftentimes they can accurately say who killed it: us.

And that’s where Rittmaster hopes the new Bonehenge Whale Center can begin to make a difference.

The bones practically jump out at you when you enter Bonehenge: The entrance is an archway formed by the huge mandibles of a 46-foot-long right whale. Some of the bones have been cleaned and rearticulated to resemble marine mammals that appear to be swimming as they hang from the ceiling. Others are in the midst of being reassembled. Still others have been stacked as they wait for Rittmaster and volunteers to reassemble them, too.

“All of these bones — every animal in here — has a story to tell,” Rittmaster says, “and it’s a story that needs to be heard.” He points to the lower jaw of a right whale. “I want you to put your hands on these, because where else can you do this? This is one of the most endangered large whales on Earth, and it lives off of our coast.”

“All of these bones — every animal in here — has a story to tell, and it’s a story that needs to be heard.”

This particular whale, an adult female, stranded in Nags Head in 2011. Rittmaster says that she fell prey to fishing line and was struck by a ship — the two most common causes of death that can be determined among whales that strand in North Carolina. He points to a dolphin, Lionel. He became entangled in monofilament fishing line when he was very young, and he continued to grow around the fishing line — a painful evolution that led to infection and swelling. Nearby, there’s a baby pygmy sperm whale that fell victim to marine debris — a large plastic bag was found in its stomach. The 37-foot-long humpback whale was struck by a ship, severing her skull and probably killing her instantly. “I’ll admit, it sometimes gets depressing or macabre thinking about what happens to these animals,” Rittmaster says. “But when I can build a display that addresses a conservation issue, I kind of get excited because I want people to know about these problems. I’m hoping it will make them care.”

That’s what happened to Cary Spencer, one of Bonehenge’s most active volunteers. One afternoon this past winter, the Beaufort resident found herself sanding the ribs of a pygmy sperm whale as she helped Rittmaster rearticulate the animal’s bones. She became passionate about the cause after hearing Rittmaster speak to a local group, and she showed up one morning to help out. Now, she jokes that Rittmaster can’t get rid of her.

“I love the idea that I’m working on something that will outlast me,” Spencer says. “I want people to see this and be fascinated by it so that they’ll try to do a better job of conservation. I want people to care, and to know that they can make a difference.” 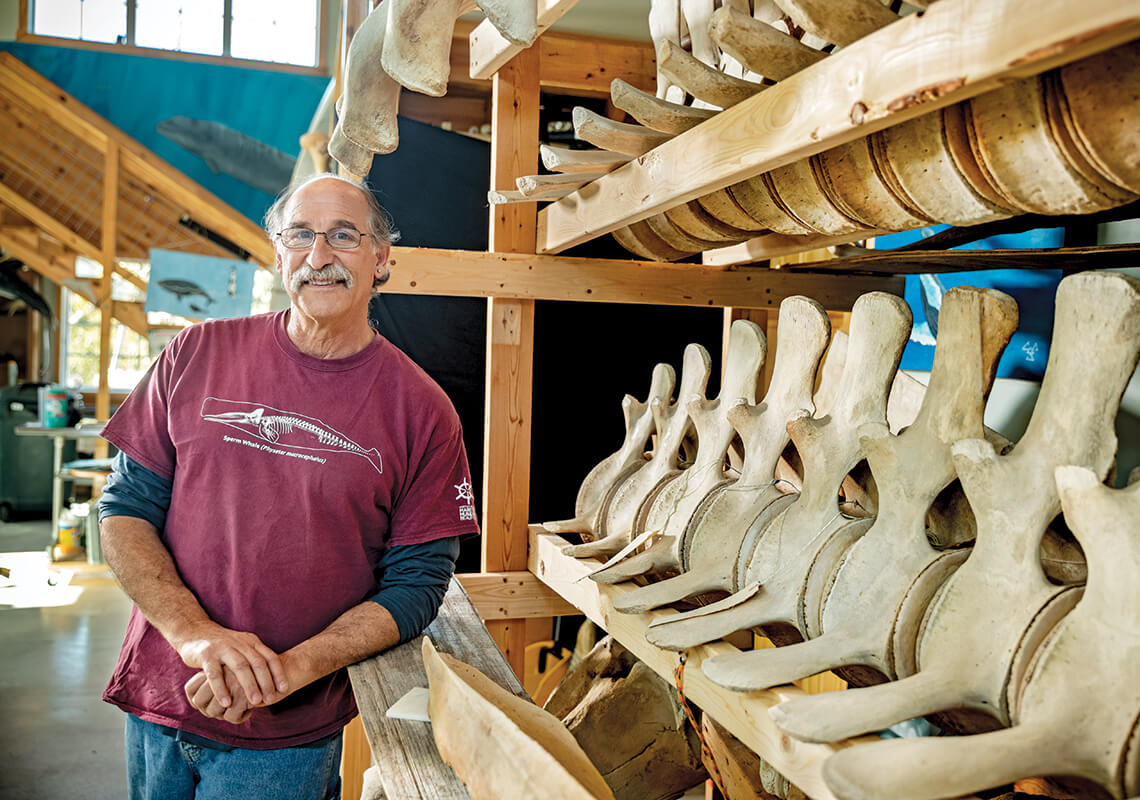