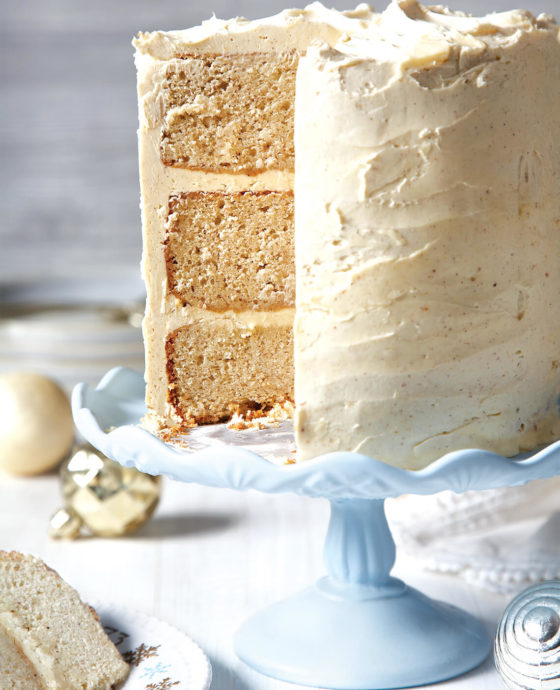 In a small bowl, stir together the condensed milk, eggnog, and 1 tablespoon spiced rum until well combined. Add the other tablespoon of spiced rum for a stronger flavor. Set aside.

In a medium bowl, whisk together the flour, baking powder, salt, cinnamon, nutmeg, and cloves until well combined.

Divide the batter evenly among the prepared cake pans. Use an offset spatula to spread batter evenly to the edges. Bake for 25 to 35 minutes or until a cake tester comes out clean.

Cool in the pans on a wire rack for 5 to 10 minutes. Using a fork or bamboo skewer, poke holes in the top of each cake. Drizzle or brush the rum syrup evenly over each layer. Let the layers sit in the pan for 5 minutes before removing from the pan and placing on a wire rack.

For the icing: Using an electric mixer, beat the butter on medium-high speed until light and fluffy. Add rum, cinnamon, nutmeg, and salt. Continue to beat until well incorporated. Add 2 cups of the powdered sugar until it’s mostly incorporated. Add the remaining sugar and mix for 3 to 5 minutes. Add the eggnog, one tablespoon at a time, until the icing reaches a soft, spreadable consistency.