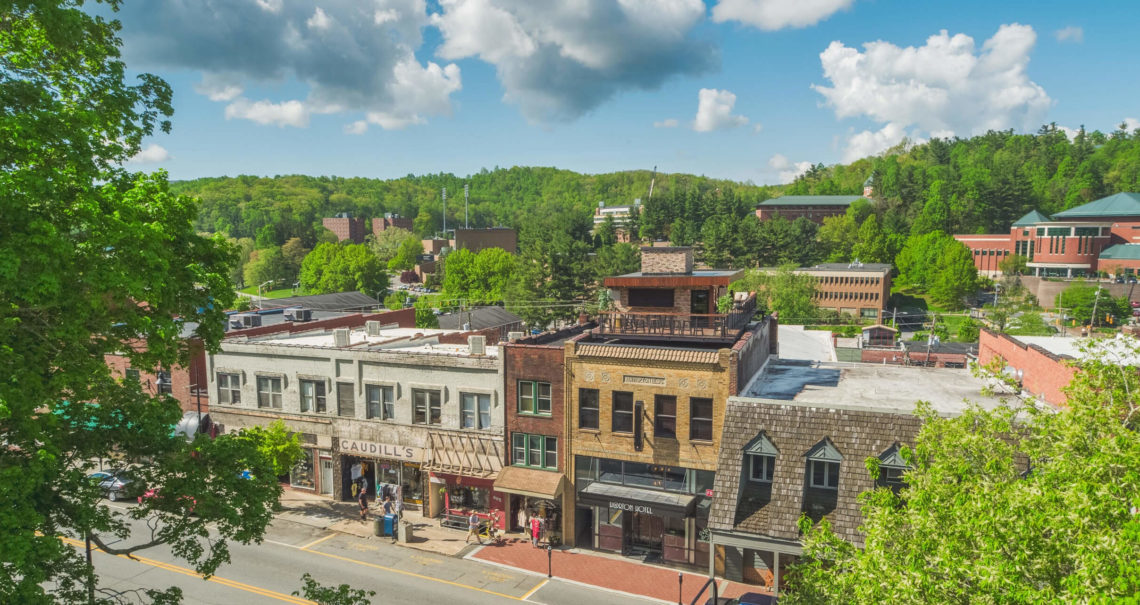 Roll the windows down, turn the radio up, and breathe in that cool mountain air: This summer, head west and hop on the Blue Ridge Parkway. The iconic, 469-mile ribbon of road winds through some of the most spectacular scenery in the High Country — with plenty of pitstops along the way.

After taking in the incredible long-range views, take time to explore the local hotspots in towns along the famous route. In Boone, Beech Mountain, Blowing Rock, Wilkesboro, and West Jefferson, you’ll find enough activities, shops, and restaurants to fill a vacation — or one perfect day trip. Here’s where to go to get started.

Tube the New River: The New River might be the second oldest river in the world, but it ranks number one for the best spot to cool off — and we mean really cool off — in the summer. Plan a tubing adventure through a local outfitter like High Mountain Expeditions or Wahoo’s Adventures. All you have to do is climb into the inner tube, sit back, and float downstream, taking in the local scenery along the way. 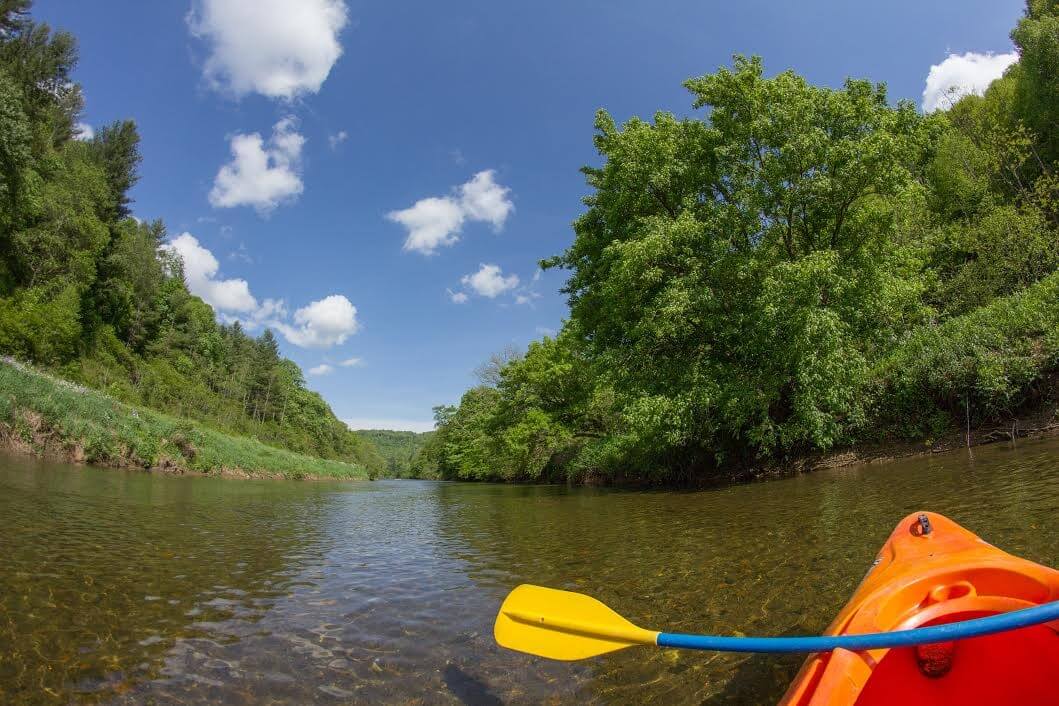 Take in local scenery as you float along the New River, the second oldest river in the world. photograph by North Carolina High Country Host

Mast General Store: In the late 1800s, the Mast brothers owned several general stores in the area, and the original location in Valle Crucis remains a beloved tourist destination thanks to its eclectic collection of staples and souvenirs.

The Mast General Store’s Boone location opened downtown in 1988. Often referred to as the Old Boone Mercantile, the shop stocks outdoor gear and clothing along with games, toys, and barrels full of colorful candies that delight kids (and kids at heart). 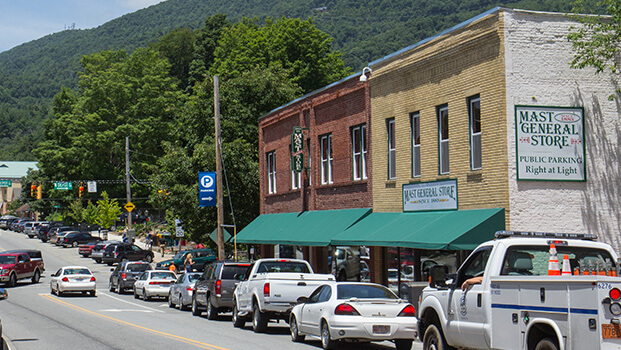 The Mast General Store’s Boone location opened downtown in 1988 and is often referred to as the Old Boone Mercantile. photograph by North Carolina High Country Host

Horton Hotel: With 15 gorgeous guestrooms and a location in the heart of downtown, the first boutique hotel in Boone is one of the most sought-after spots to spend the night in the High Country. But you don’t have to book a room to experience the Horton Hotel. A swanky bar in the lobby lounge serves wine, beer, and craft cocktails and light bites, but the rooftop lounge is the place to be. Order a smoked old-fashioned, sit back and take, in the 360-degree views.

Lost Province Brewing Co.: Pizza and a pint are quintessential weekend fare and Lost Province Brewing Co. serves up the best of both. Microbrews like Bless Your Heart Blonde Ale, Hipster Juice, and Fire on the Mountain Jalapeño Amber Ale are brewed on-site, and pizza topped with ingredients grown on local farms is pulled fresh from the wood-fired oven.

Listen to live music Thursday through Saturday evenings or score a table on the patio and watch passersby enjoying their time in downtown Boone.

Fred’s Backside Deli: Classic breakfast foods like eggs, bacon, grits, and hash browns are on the menu at this neighborhood deli, located on “the back side” of Fred’s General Mercantile. Fuel up before setting out for a day of outdoor activities or stop in for sandwiches and other grab-and-go items to take with you on the trail.

Mountain Biking: Who says ski mountain fun has to stop in the summer? When the weather heats up, ski runs are transformed into mountain bike trails at Beech Mountain Resort, and range from mild to wild. Ride the lift to the top of the mountain and careen down the trails, navigating technical features like rocks, hairpin turns, and wooded descents.

“For a beginning rider, my favorite [trail] is Green Mamba,” says Talia L. Freeman, director of marketing for Beech Mountain Resort. “It provides enough of a challenge to keep you engaged, but it’s forgiving as you are learning to ride.” 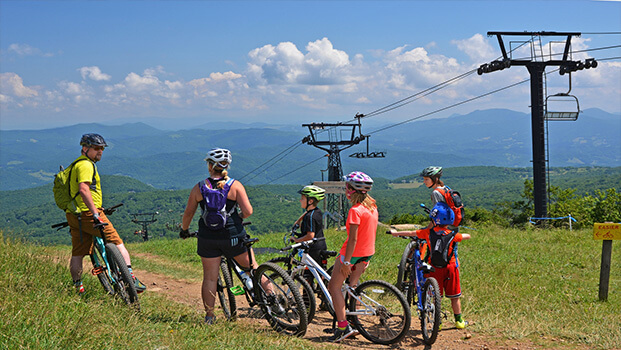 Emerald Outback Hiking: With seven miles of trails to explore and elevations topping out at 5,4000 feet, Emerald Outback at Beech Mountain has some of the highest trails on the East Coast.

“There are big views of Roan Mountain from that trail,” Gavenus says.

Looking for a longer hike? Follow the Southern Ridge trail. The most advanced trail in the outdoor adventure park boasts impressive rock formations and big views at Awesome Oz and Pride Rock overlooks. 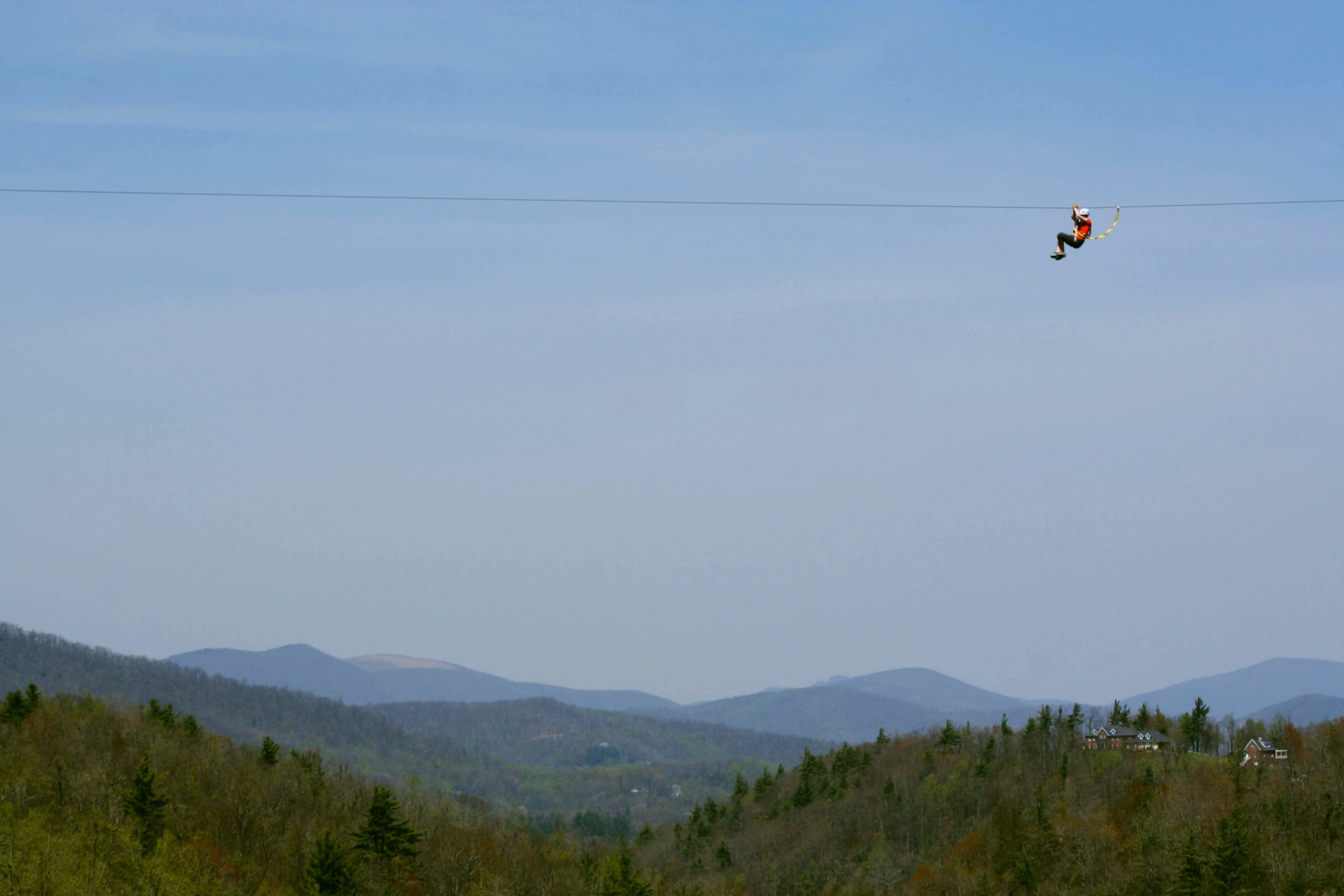 The zip-line tour at Sky Valley Zip Tours includes 10 different lines that are as long as 1,600 feet and as high as 300 feet off the ground. photograph by North Carolina High Country Host

Moses Cone Park: Flat Top Manor once served as a summer residence for textile manufacturer Moses H. Cone and it remains the centerpiece of Moses Cone Park. The manor is listed on the National Register of Historic Places and serves as a gallery for artists in the Southern Highland Craft Guild.

Visiting the manor is a must according to Tina White, acting chief of interpretation and education for Moses Cone Park, but she also suggests exploring the 3,500-acre grounds and more than 25 miles of beautifully curated, winding carriage trails. “Bass Lake, which is very close to downtown Blowing Rock, is extremely popular for hiking, but Trout Lake, also located on the estate, is a wonderful place to hike and is usually not as busy,” White says. 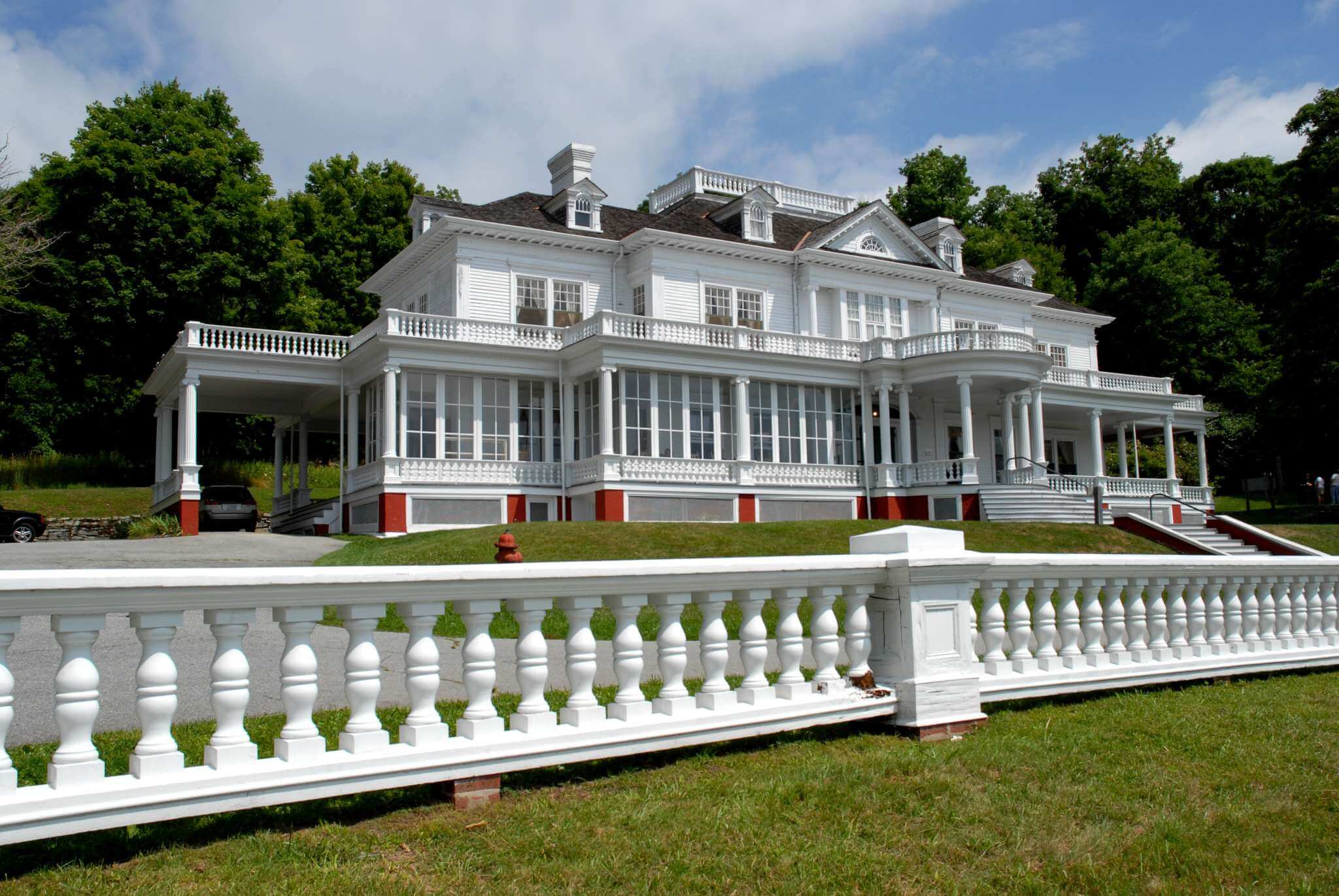 Speckled Trout Restaurant & Bottle Shop: With a name like Speckled Trout, it comes as no surprise that the freshwater fish is featured prominently on the menu. Try the Devilish Eggs with house-smoked trout, smoked trout tea sandwiches, or trout nachos. Not into fish? There are plenty of other dishes made with local ingredients and a lot of heart.

“Food is our love language,” says co-owner Erica Brinker. “We’re all about Appalachian regional cuisine and tying food back to our location.”

The bottle shop — a bar within the restaurant — also has an extensive beer and wine menu and bottles and cans to go.

Call Family Distillers: Moonshiner Willie Clay Call was infamous for racing down the winding roads in Wilkes County with gallons of illicit ’shine in the trunk of his car. His grandson, Brian Call, is carrying on the family tradition. Call Family Distillers uses recipes that were passed down for generations to make moonshine. The most popular: the 101-proof Uncatchable.

The distillery is as much a museum as a watering hole. Take a tour to see the old family stills and three of the original moonshine cars, including a 1961 New Yorker: “The cars were so fast, the revenuers couldn’t catch him,” says co-owner Laura Call. Then order a drink and listen to live entertainment on the new outdoor stage. 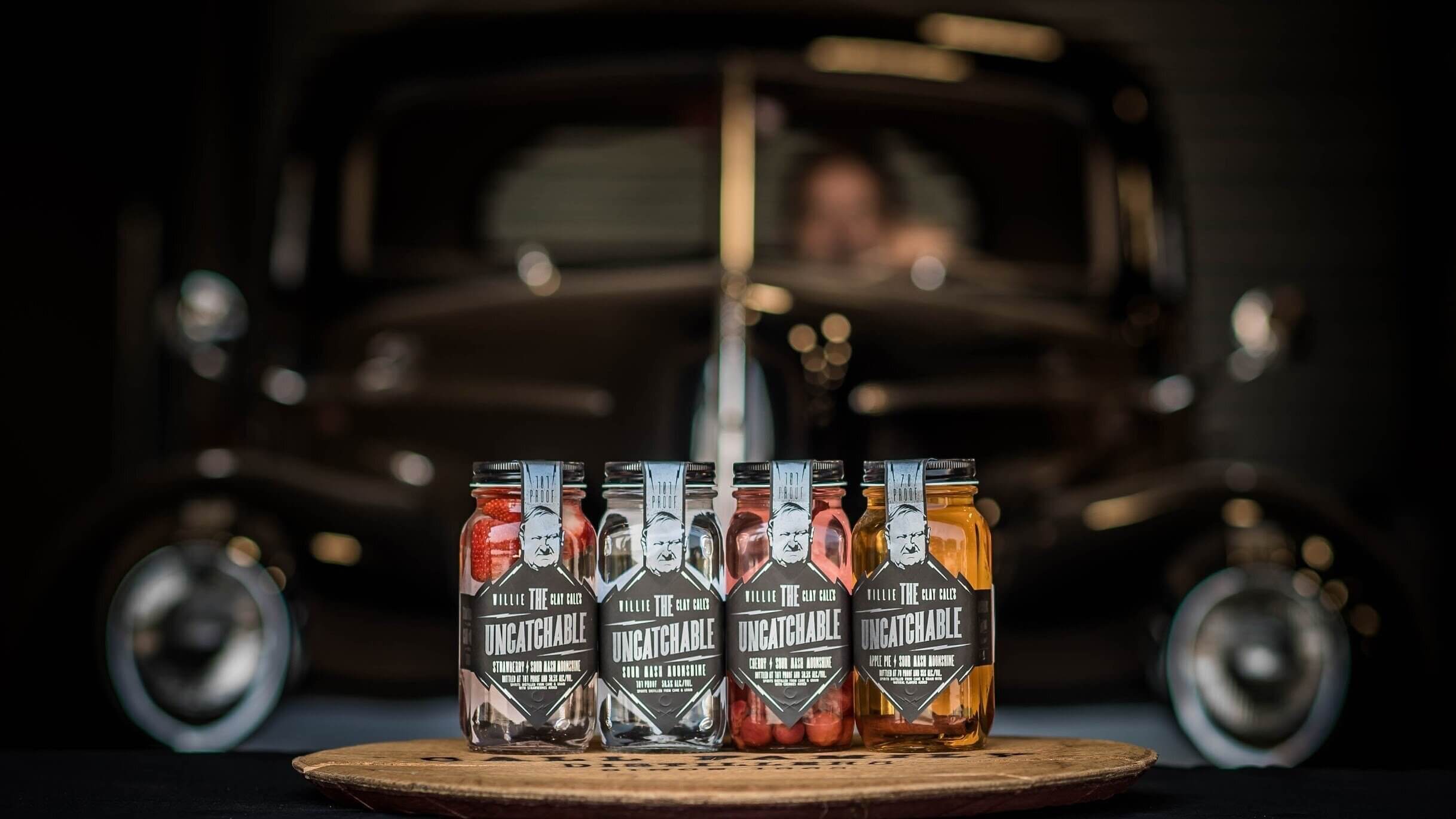 Wilkes Heritage Museum: Following a historic renovation, the 1902 courthouse was reimagined as a museum that houses an impressive collection of artifacts showcasing Wilkes County history. View exhibits highlighting local industries from timber and agriculture to moonshine or step into the old courtroom to explore the Blue Ridge Music Hall of Fame.

The Wilkes Heritage Museum also restored the 1860 Old Wilkes County Jail and the 1779 home of Captain Robert Cleveland, which are also part of the museum and open for guided tours.

Dooley’s: This historic hotel turned neighborhood haunt is known for casual fare. Curious about the inspiration for the Executioner’s Choice sandwich, Hangman’s Rare Roast Beef, and Go to Jail Dooley Burgers? Dooley’s was named for “The Ballad of Tom Dooley,” a song about the murderer who killed two women from Wilkes County and was incarcerated in the nearby Old Wilkes County Jail before being hanged for his crimes. 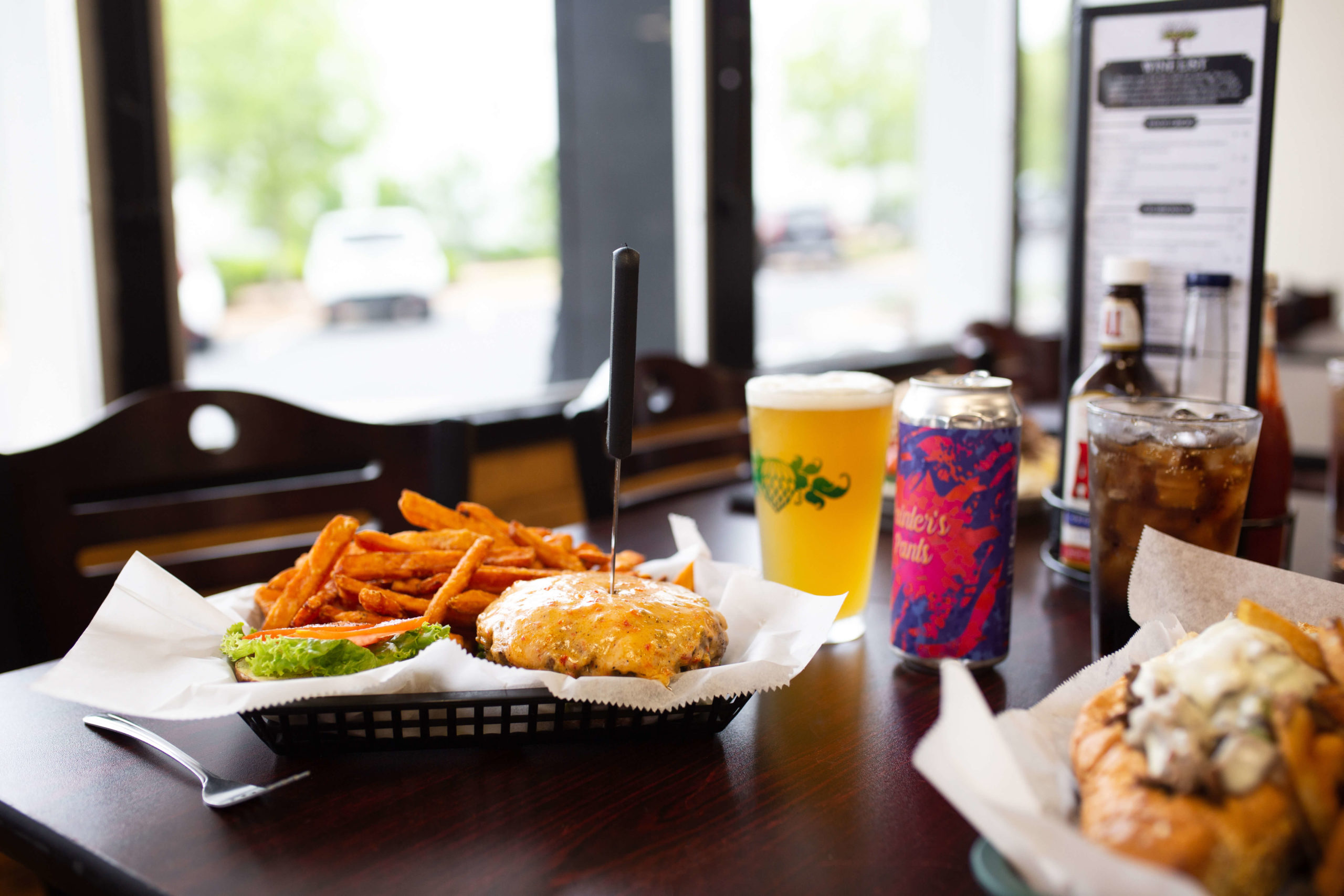 Stardust Cellars: Each bottle of award-winning wine at Stardust is crafted with the environment in mind. The off-grid, sustainable winery and first biodynamic vineyard in North Carolina embraces traditional practices like foot stomping their grapes to create wines like Pinot Gris and Traminette. Stardust Cellars is also known for its mead, an ancient beverage made from fermented honey.

The taproom serves wine, mead, and craft beers and doubles as a community gathering spot complete with firepit, board games, and live music.

“We have so much natural beauty and history in the High Country and the murals promote that,” explains Rebecca Williams, programs director for Ashe County Arts Council.

Stop by 19 murals located throughout downtown as part of a self-guided murals tour. Look for Train at Jefferson Station, a mural painted in honor of the Virginia Creeper train that stopped at the station or pose for a photo in front of the Angel Wings, an “interactive” mural that makes it look like you have wings.

Ashe County Cheese: To find the cheese, look for the black and white bovines. The oversized mascots stand outside the cheesemaking plant where you can watch countless gallons of milk being made into cheeses like cheddar and gouda — and an Ashe County favorite: cheese curds, or “squeaky cheese.”

Ashe County Cheese is the place to stock up on everything from local cheese, butter, and spreads to sausage, eggs, and jam — all the fixin’s for the perfect breakfast in your rental cabin.

Oversized mascots stand outside the cheesemaking plant where you can watch countless gallons of milk being made into cheeses. photograph by North Carolina High Country Host

Boondocks Brewing: Small batch beers like Backwoods Campfire Scottish Ale and Blue Ridge Brutal Brown are brewed in the heart of West Jefferson. Grab a seat on the patio, order a pint, and spend the evening listening to live music. The menu at Boondocks Brewing features “pub grub” like smothered fries and salted Bavarian pretzels as well as heartier fare. The Buffalo chicken pot pie is a local favorite.

Regular events like Thursday Open Studios offer a chance to see artists at work and engage with them about the creative process; on the first Friday of the month, stop in to make small works such as prayer flags and beaded jewelry.