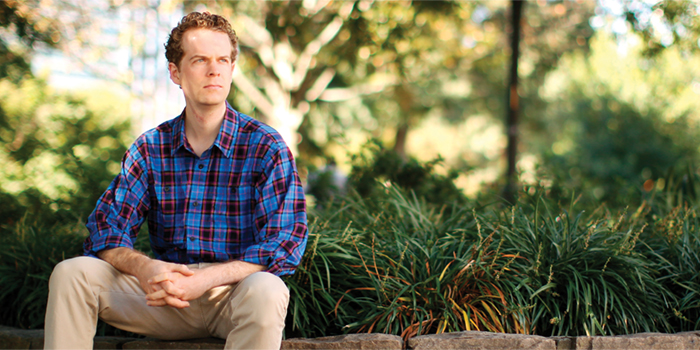 A graduate of the University of North Carolina School of Law. The former executive director of the North Carolina Brewers Guild. A seminarian at Yale Divinity School.

Win Bassett’s career trajectory has taken twists and turns not uncommon for those in search of something greater than themselves. Yet where he finds himself today is at the intersection of literature and faith.

In the December 2013 issue, Bassett contributed an essay in our special feature, “A Prayer for North Carolina,” about a life-changing interaction in Chapel Hill he had as a college student. While this experience shaped his thoughts on equality, his views evolved and formed while reading the words of a few seminal authors. He shares five of those books and how they influenced him in the following reading list.

I don’t recall in what school grade I first read this book, but its narrative of inequality from a child’s point of view and its dramatic cover illustration of an embracing and a fire on the Puffin 1997 edition never left me. A recent essay I found notes that To Kill a Mockingbird, another influential text on equality, often overshadows Roll of Thunder. They’re two different stories from different perspectives, and despite my short career in law, I find I meditate more on the raw injustice experienced by Cassie, a young child living in Virginia in the 1930s, than Atticus.

I stumbled upon Waugh later in life and by happenstance, with no recommendation by friends, which is usually how I discover books. I’m an Anglophile and a sucker for Oxford tales because I studied there for a summer. The layers of alcoholism, intimate male friendship, and an inescapable Catholicism made me tear through this novel that has become one of my favorite works of fiction.

Reynolds Price has had perhaps more influence on my intended vocations of writing, teaching, and ministry than any other writer. His own story of leaving a small town in North Carolina for a Rhodes Scholarship to Oxford only to find himself back home to do God’s will by writing and teaching resonates quite closely with my own story (except for the whole Rhodes thing). His unwavering faith later in life despite immeasurable pain continues to be an inspiration for me.

4. Christian Wiman’s My Bright Abyss: Meditation of a Modern Believer

I’m fortunate to arrive at Yale Divinity School at the same time as Christian Wiman, former editor of Poetry magazine. This book-length meditation is a divine mess of prose and verse before, during, and after Wiman’s struggle with a rare cancer, and despite one’s affinity for poetry or one’s experience with a painful illness, anyone can find peace with this work.

Aunt Emily’s speech to Binx Bolling that ends, “But how did it happen that none of this ever meant anything to you?” hits close to home with my experience of growing up in a rural southern town surrounded by the love and faith, though often both silent, of family and friends – saints I later realized set a virtuous bar impossible for me to reach in this earthly life.

About Win Bassett
A graduate of North Carolina State University and the UNC School of Law, Win Bassett is a writer, lawyer, and most recently a student at Yale Divinity School. His writing, which often focuses on the intersection of faith and daily life, has appeared in the The Huffington Post, The Atlantic, and a variety of other publications. winbassett.com