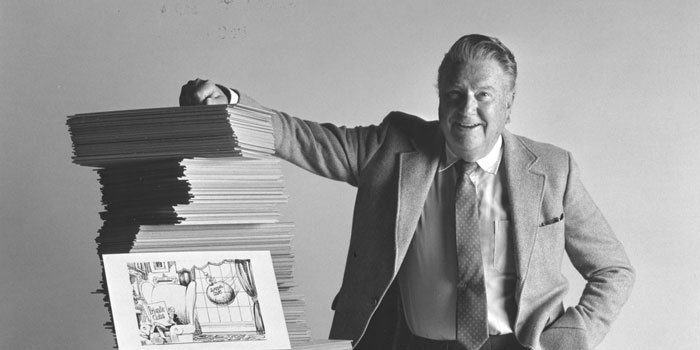 Lean, fidgety Pete McKnight, editor of The Charlotte Observer, had only one good eye, but he could spot talent wherever he found it. In Eugene Gray Payne Jr., he found it in an unlikely place — behind the wheel of a Foremost Dairies milk truck.

Born in 1919, Gene Payne grew up three blocks from The Observer building. When his father died in an auto accident, his mother went to work, leaving 4-year-old Gene in the care of an aunt who encouraged his artistic interests. A bright, open-faced lad with a shock of thick, black hair, he drew constantly, copying newspaper comics, especially “Joe Palooka” and “Bringing Up Father.” He excelled in Charlotte schools and later at Fishburne Military School in Waynesboro, Virginia. He went on to Syracuse University on an art scholarship.

When World War II came, he entered the Army Air Corps and joined a B-29 crew flying weather reconnaissance. After the war, he returned to Charlotte and opened an art studio specializing in portraits. But business was slow, and with a family to feed, he supplemented his income by driving a milk truck.

En route to becoming a Foremost Dairies sales manager, he met McKnight, who was busy recruiting staff for the once-stodgy Observer. After he learned of Payne’s art background, McKnight asked to see some of his work. Before long, Payne was submitting illustrations for publication on a freelance basis.

Several months later, McKnight hired Payne to retouch photos, draw maps, create charts, and illustrate editorials. Political cartooning was older than the American Revolution, but The Observer, relying on syndicated materials, had never had an editorial cartoonist of its own.

Payne was fast and funny. From a paint-spattered easel in a crowded corner of the newsroom, surrounded by wisecracking reporters, he worked easily and chuckled about the editorial assignments. He loved portraying politicians as squat figures in frock coats, string ties, and wide-brimmed hats. He enhanced Observer editorials by clothing them in impish humor.

He drew Dr. Spock as an infant sucking his thumb while holding a lollipop marked “Stop the Draft.” He showed heavyweight boxer Muhammad Ali hiding behind a sofa as a man labeled “The Draft” called to the door, “Is the World Champion In?” He portrayed President Johnson at a cabinet meeting whispering to Secretary of State Dean Rusk, “The war is going very well … Pass it on …”

When not cartooning, Payne freelanced by painting dozens of children’s portraits and crafting hundreds of caricatures of prominent business and civic leaders.

In 1961, David Gillespie of Gastonia became The Observer’s chief editorialist. Payne’s humor was sly and visual; Gillespie’s was raffish and verbal. After Gillespie chose editorial topics for the day, they discussed cartoon possibilities. Laughing and gesturing, Gillespie suggested images that Payne hastily sketched.

Not all Payne cartoons were funny. His most poignant marked the death of Winston Churchill in 1965. It showed Churchill in a homburg hat and big cigar, rising above the earth with his right hand forming a “V” for victory. Readers ordered more than 8,000 reprints.

Later in the ’60s, as the civil rights revolution spread and the war in Vietnam provoked protests, Gillespie and Payne struggled to produce challenging commentaries without offending readers. One of their straddling efforts resulted in a 1967 cartoon of President Lyndon B. Johnson carrying a baby labeled “Vietnam War” onto a bus as the driver advised him, “Dr. King says, would you please move to the back of the bus?”

That cartoon, implying that among national interests the Vietnam War was secondary to civil rights, won Payne the Sigma Delta Chi award for the year’s best cartoon.

The same cartoon was among 10 that Payne entered in the 1968 Pulitzer Prize competition. When Pulitzer winners were announced, Observer staffers gathered at the Associated Press Teletype, watching as the printer clattered out, “For Editorial Cartooning, Eugene Gray Payne, The Charlotte Observer.” The newsroom erupted in cheers as colleagues rushed to embrace the astonished Payne, then 49. His reaction: “Well, what about that?” His cartoon for the next day was a doorknob bearing a sign, “Out to celebrate.”

It was The Observer’s first Pulitzer and the first awarded in North Carolina since 1952 when the News Reporter in Whiteville and The Tribune of Tabor City won a public service award for their joint exposure of a regional Ku Klux Klan.

Payne left The Observer in 1971 to join WSOC-TV but returned in 1978. He retired at age 70 but continued to submit cartoons until his death in 2010 at age 91. A collection of his work is in the Special Collections of Atkins Library at the University of North Carolina at Charlotte.

Jack Claiborne is a Charlotte native and a retired associate editor of The Charlotte Observer, where he wrote editorials for 20 years.