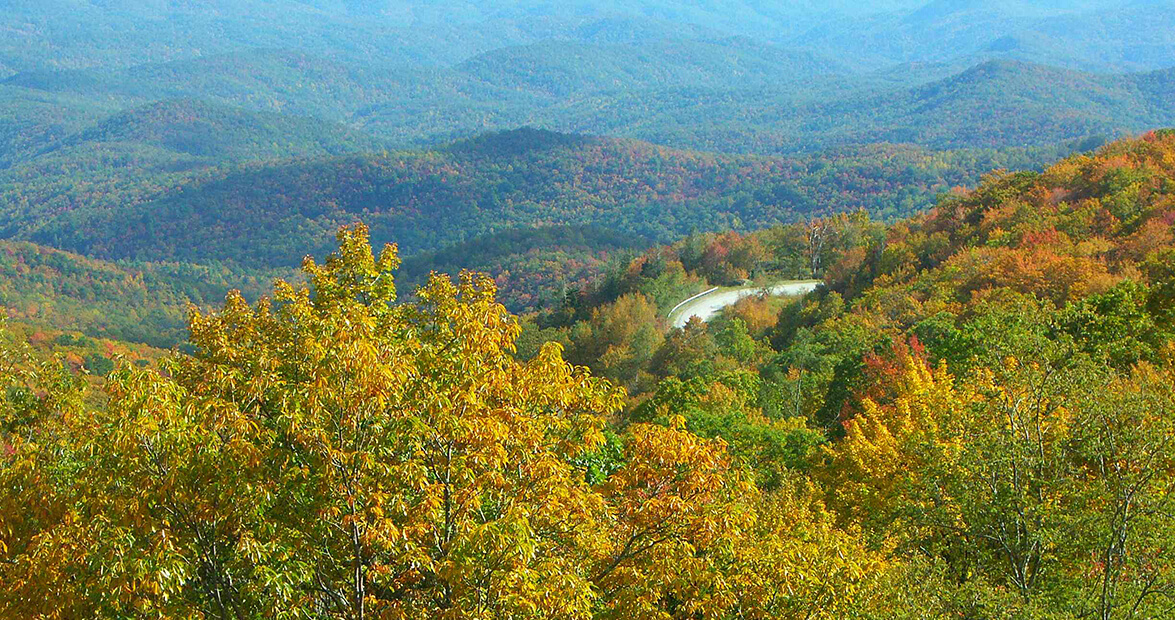 Early botanists and explorers drawn to Grandfather Mountain were the first to note that even the valleys were unusually lofty in what is now known as the “High Country” of northwestern North Carolina. This high elevation not only means cool summers and snowy winters, but also vibrant autumn color that explodes with electric intensity. Best of all, the area’s range of elevation keeps the color going strong from early to late fall. It’s easy to choose a colorful hike almost anytime between the end of September to late October.

Planning a hike to see fall foliage requires strategy. We’ve outlined a handful of choice hikes from Boone to Linville Falls that capitalize on when the leaves are at their best. But here’s a well-kept secret: err on the side of early. Many folks heading to the High Country come so late in the month that the blustery approach of winter has whipped away the best color.

With high elevations in mind, be prepared for breezy and brisk conditions. It’s not unusual to see hoarfrost and even a dusting of snow on the highest summits in October. Be sure to take a day pack, a sweater, waterproof rain jacket, water bottle, a tasty lunch, and even a hat and light gloves. You’ll want to make sure you’re safe and comfortable.

Grandfather Mountain’s eastern flank has flames of bright color in late September and early October, and the best place to see it is on the Blue Ridge Parkway at Rough Ridge, which is southwest of Blowing Rock at Parkway milepost 302.8. It’s a moderate climb of only 0.3 miles (0.6-mile round-trip) to boardwalk views that span from the highest peaks far down to the still green Piedmont. You can also take a 1.2-mile round-trip hike at a higher elevation to the peak of the ridge and astounding vistas. These almost-alpine eastern crags of Grandfather blaze in vibrant reds and yellows, with the parkway’s famous serpentine span, the Linn Cove Viaduct, right in the middle of it all. But go early; by mid-October, this outpost of early color looks a lot like winter just as the crowds arrive. 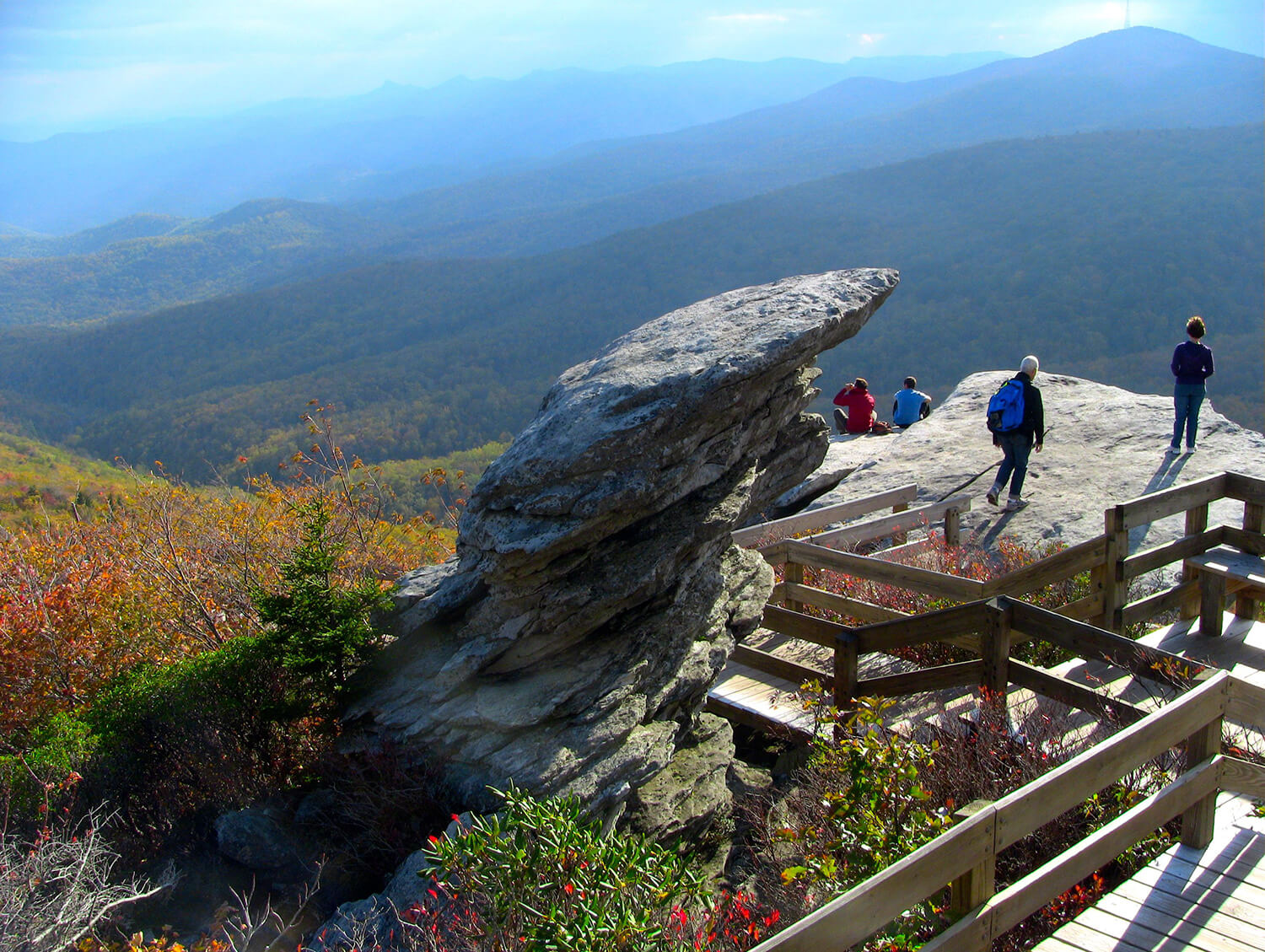 The Peaks at their Peak

The first two weeks of October provide another prime time to take in the sights where the leaf-looking is at its best: way up there on the summits. There are several state parks in the surrounding Boone area we recommend this time of year.

Mount Mitchell, at parkway milepost 355, is an hour and a half southwest of Linville. At nearly 6,700 feet above sea level, colorful deciduous trees provide a stunning contrast to the evergreen hues of spruces and firs. Take in the views from the summit tower, and then wander along the easy 0.75-mile Balsam Nature Trail back to the parking lot, past the plaques that explain the rare climate of this Canadian-like forest zone. What’s the best big hike? Venture out to Mount Craig on a moderate-level journey that’s two miles round-trip. Mount Craig, which is almost as high as Mitchell, was named in honor of Governor Locke Craig, who set the stage for the creation of North Carolina state parks almost 100 years ago.

Grandfather Mountain is another autumn-color “island in the sky.” Whether you hike the rocky trails in Grandfather Mountain State Park or start your summit with a drive to the Mile High Swinging Bridge, the loftiest forests often offer brilliant hues well before October 15. From the summit road, the easy, 2-mile round trip on the Black Rock Nature Trail offers early, eastern flank color akin to Rough Ridge. But it’s the Grandfather Trail that’ll really put an exclamation point on an autumn adventure. This not-to-be-missed ladder climb up cliffs is one of the East’s top hikes. It’s strenuous, but the 1.8-mile round-trip over the first peak will satisfy anyone who doesn’t want to tackle the nearly 5-mile round-trip to Calloway Peak. Even if you catch this hike a tad late, views of fall color in surrounding valleys will be mesmerizing until October’s third weekend.

Don’t leave out one of North Carolina’s newer state parks, Elk Knob, which is just 20 minutes north of Boone. Like Mount Jefferson State Natural Area, which is a bit farther northeast in Ashe County, Elk Knob is perfectly situated north of the High Country’s tallest peaks — Beech, Sugar, and Grandfather — and just south of the two highest mountains in Virginia: Mount Rogers and Whitetop. Take the gradual, meandering 1.9-mile Summit Trail (3.8 miles round-trip). The low vegetation on the mountaintop provides a sweeping view of all those noteworthy peaks. From the middle to the end of October, an almost endless carpet of color stretches as far as you can see. 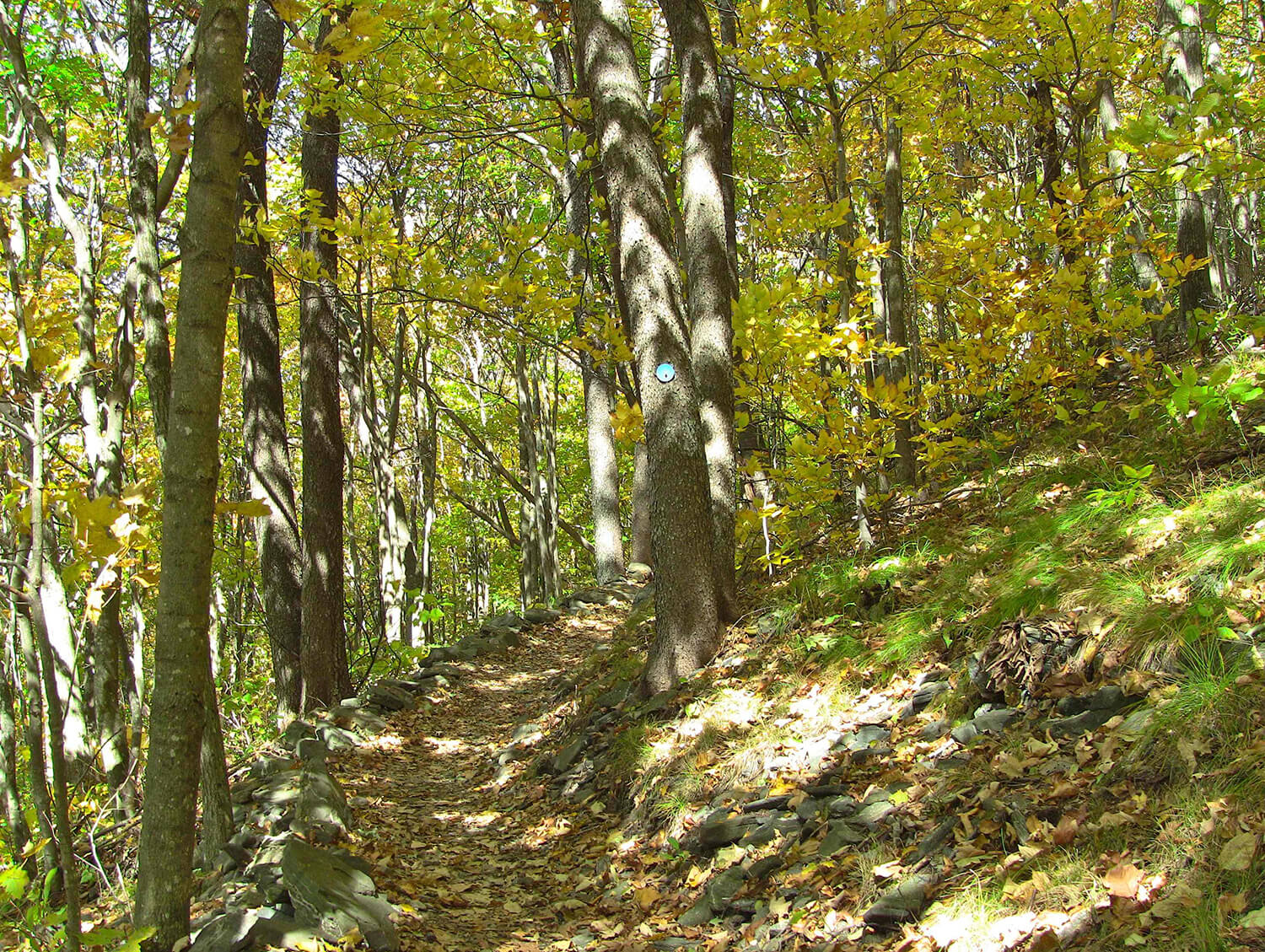 Elk Knob’s gradual Summit Trail is a colorful hike, complete with occasional benches built into the side of the path. photograph by Randy Johnson

Peek of the Parkway

The Blue Ridge Parkway, America’s second-most visited unit of the national park system, is always popular in fall. The High Country stretch from Doughton Park northeast of Boone (milepost 238.5-244.7) to Linville Falls (milepost 316.3) is made for mid- to late-October motoring. Again, it’s best to err early, so opt for a mid-week trip after October 15, when it is less crowded. These days often prove to be safe from leaf-whipping winds or rain that invariably arrives as the third week of October ends.

Bright color is front-and-center on this portion of the parkway. Waterfalls provide a great destination in the fall, and the Cascades Trail in Jeffress Park (milepost 272, just north of U.S. 421 in Deep Gap) is a great choice. The trail’s interpretive plaques showcase the trees of the Blue Ridge, and the streambed claims a lot of the choice fall color species. The easy 1-mile loop follows clifftops with valley views and reaches a few vista points where Falls Creek leaps off the crags. The return is along the stream, an enclave of color.

Linville Falls (milepost 316.3) is a famous and popular spot, so visit early to avoid the crowds, or come later in the month to take advantage of the topography. Even if the trees along the view-packed trails have lost their leaves, the deep chasm below shelters a ribbon of color. Your best bet is to take the lesser-traveled, but strenuous, 1.4-mile round trip on the Linville Gorge Trail. Go left at the visitor center and wind down into the gorge to sit right beside the colorful base of the falls.

Waterfall walks often lead to sheltered leaf-looking spots, and the new Otter Falls Trail in the town of Seven Devils is an example of such. The town purchased this pristine tract with citizen support and matching park grants. Dedicated just this summer, the moderately strenuous path creates a 1.2-mile round-trip loop that ventures down to secluded Valley Creek. In this mossy grotto amidst bright yellow birches and rhododendron, the stream cascades off a sloping rock to pools below. Take a picnic; tables await. Otter Falls and the Glen Burney Trail, which takes you from downtown Blowing Rock to two waterfalls, make it obvious that fall hiking opportunities in the High Country include more than just state and national park trails. Gone are the days of believing that fall foliage season includes only one good weekend or a few days of “peak color” in mid-October. If you look to both high and low elevations and go where the local leaves are peaking, autumn in the mountains can stretch across an entire memorable month.