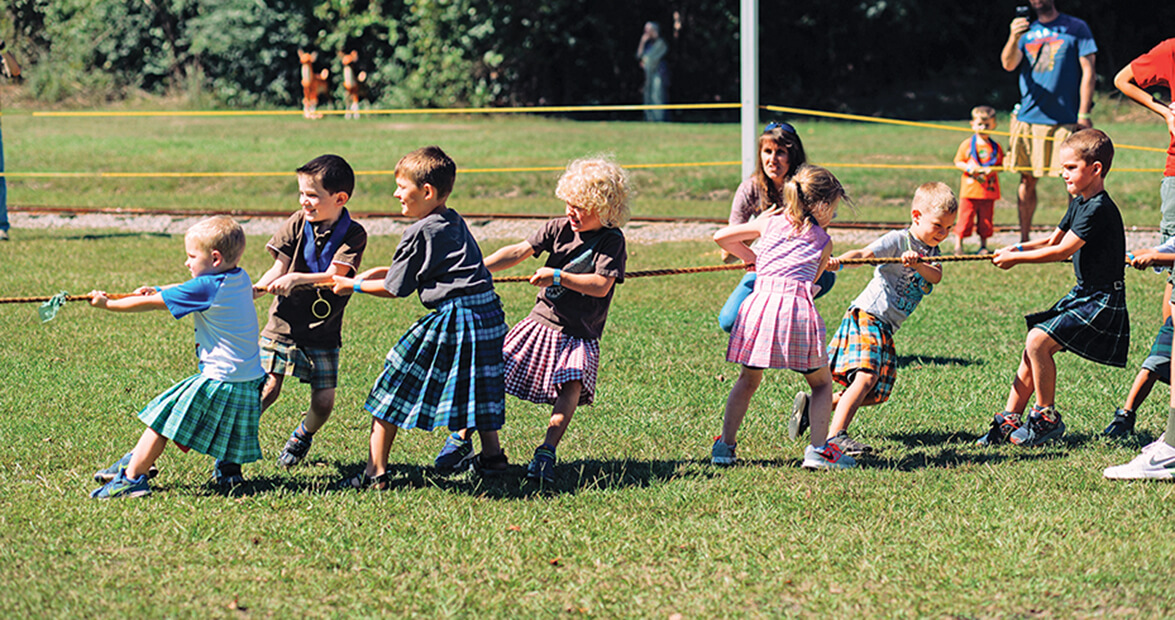 The opening ceremonies of the Scotland County Highland Games were underway by the time we got to Laurinburg, and I’d not be overselling it to say that my two boys were utterly taken with the Parade of Tartans and the massed clans in regimented rows out on the green. And who could blame them? It was hard not to be won over by the cacophony of drums and bagpipes, the high blue sky, the flags everywhere flapping in the light breeze, the season changing over almost in real time. It took about 15 minutes before they started asking, over and over, when the Children’s Games would begin.

Soon, I told them, in my clumsy Scottish brogue. Soon! First order of business, though, wee ones: kilts.

There were, at these Highland Games, a startling number of people who own their own kilts. My children are sadly not kilt owners, but the Scotland County Games had us covered: There are loaner kilts for kids. Imagine these boys, fully kilted out and competing in children’s versions of the Scottish heavy athletics — stone tosses, hammer throws, and the like. (History suggests that these are the traditional ways that Scottish warriors kept in shape for battle, but shouldn’t we instead believe that these contests are the inevitable outgrowth of friendly, boozy pub disputes?) Where were we? Yes: See The Wee in a chaotic, mainly straight-line 4-and-under footrace. See The Toad, age 7, throwing quite a large rock indeed through the air. See them both in the tug-of-war. They loved it, all of it, and deeply. The games of the Highland Games, it turns out, are essentially a sanctioned, refereed version of all those activities we disallow at home.

“Will there be bow-and-arrowing?” The Wee asked, eyes ablaze.

“Hopefully not,” I told him. “But we could try the caber toss.”

I told him it was a giant stick, like a telephone pole, and off we all hurried to line up for that, too.

The remainder of our cool, early fall afternoon included rides (one ride, anyway, a half-size train that circumnavigates the grounds) and various fairground snack items and general familial ease. Perhaps we ate ourselves a bit silly. We heard what I think might be called clog-rock, and the boys danced off at the edge of the crowd during an early phase of the drumming competition. They watched, amazed, as trainers heeled sheepdogs around an obstacle course with nothing more than half-whistles and whispers. Though there were dozens of clans there, we did not find Clan McKay (or Mackay, depending), which traces from The Toad and The Wee up through me, my mother, her father, and onward. Still, though, this: Late in the day, as we were leaving, we stopped to listen to a pipe band warming up on the grounds of the historic village just off the green — and in that intimate, unscripted moment, I could not help but find myself in contact with some piece of my own history.

My half-Cuban wife’s wedding gift to me was a surprise, mid-ceremony bagpiper. Watching this band practicing in the shade of a huge oak, I was taken right back to that June evening: storms off in the distance, and a promise to be made. How could I have known that promise would lead here, to these two boys, suddenly by my side, listening to bagpipes instead of running wild? Part Scots, part Cubanasos, part West Virginia and part Winston-Salem, these beautiful American mutts had me in tears now, one boy in each hand, and the bagpipes had me in tears, too, as they always do, as they did at our wedding. I caught my wife’s eye, and she was teary, also. What have we done? we said to each other, silently, one more time. The band played on. Whatever it is, we said, let’s keep doing it.

The Scotland County Highland Games will be held on October 7. For more information, visit carolina-highlandgames.com.