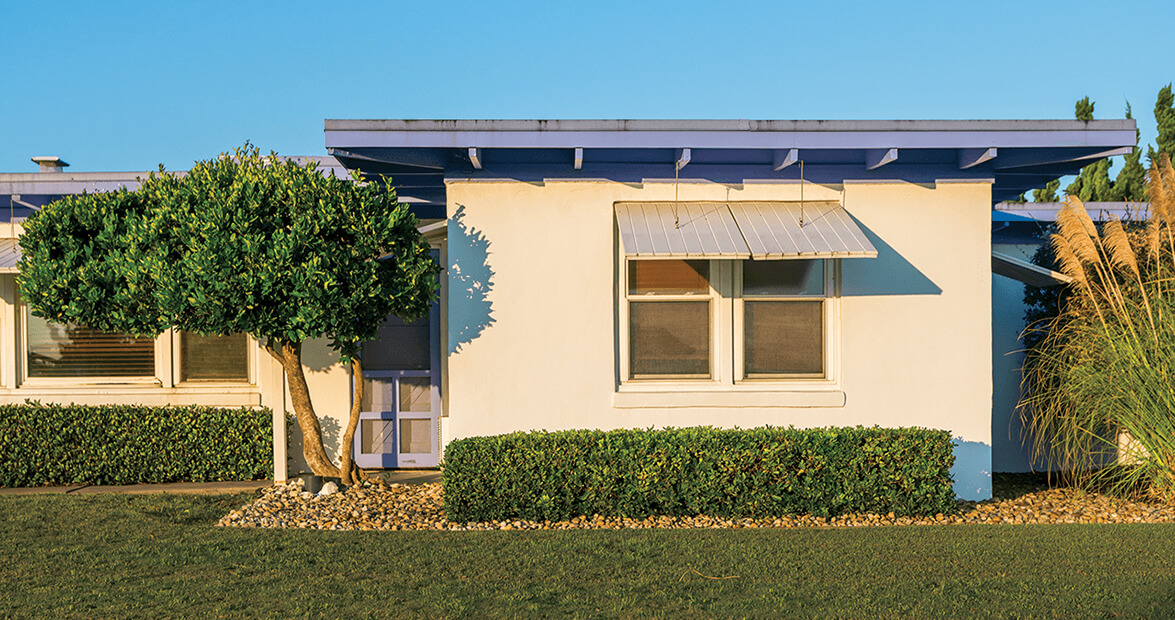 Debbie Millis dreamed one night more than 20 years ago that a flat-top cottage in Southern Shores with a big piece of driftwood out front was for sale.

The next day she and her husband, Jim, called her friend, a Realtor, to say they wanted to look at the little house on Ocean Boulevard. Her friend asked how she knew it was for sale. They had just put the For Sale sign up that morning.

“Jim and I just looked at each other and said wow,” Debbie says.

The Millises bought the flat top, a 1950s style of house she remembered from her childhood vacations to the Outer Banks. She saw that, as early as the 1980s, the squat houses with the pancake roofs were giving way to large, multistory homes. Flat tops were disappearing.

“I’d always taken for granted they would always be there,” Debbie says. “I just love flat tops.” 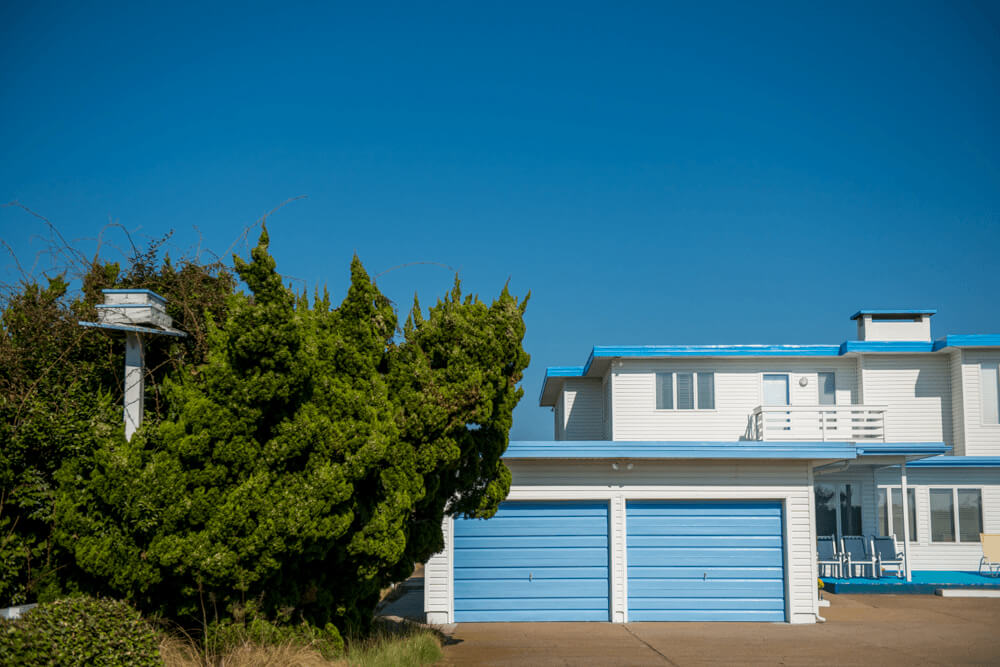 Frank Stick, an artist and developer, is credited with the birth of the flat-top cottage. After World War II, Stick bought 2,800 acres north of Kitty Hawk, including four miles of Outer Banks oceanfront, that would become Southern Shores.

Stick wanted dwellings that blended in with the dunes. The result: homes built with 42-pound concrete blocks made with local sand and topped by a no-pitch roof. Using roughly the same design, flat-top construction continued for about 20 more years.

The sturdy structures still stand, but their numbers are diminishing. Less than half of the original 80 or so flat tops are still around. Two were razed last fall, says Outer Banks real estate agent Jeff Scott.

“It’s been awhile since we have had two torn down in the same season,” he says. “I’m concerned about them.”

Seaside flat tops are still in demand, though — for the coveted oceanfront property on which they sit. Beach home buyers prefer multistory structures, on pilings, with eight to 12 bedrooms. The reason: The pilings make flood insurance cheaper and the extra bedrooms bring summer rentals more income. “Buyers today are weighing modern convenience with historical value, and most of the time historic value loses out,” Scott says.

Patricia Knight bought her Southern Shores flat-top cottage on Ocean Boulevard four years ago from the family of Francis Rogallo, the father of hang gliding. She named the house BoB.

“It sort of named itself,” Knight says of the house.

Her real estate agent is named Robert. Her contractor is Bob. The home inspector is Robert, and a friend who checks on the house while Knight is at work as a Washington, D.C., lobbyist goes by Bob.

Knight, 62, escapes to the Outer Banks oceanfront for simpler living than what she finds in Arlington, Virginia. So does Frank.

Frank is Knight’s Shar-Pei and Labrador retriever mix.Frank loves BoB. At even the mention of “BoB,” the dog pops his head up from the floor, perks his ears, and stares at Knight.

Knight keeps on her wool hat and sweatshirt while she guides a short tour through the house. The older windows tend to let in the north wind off the ocean.

Frank holds his spot on a rug in the family room. 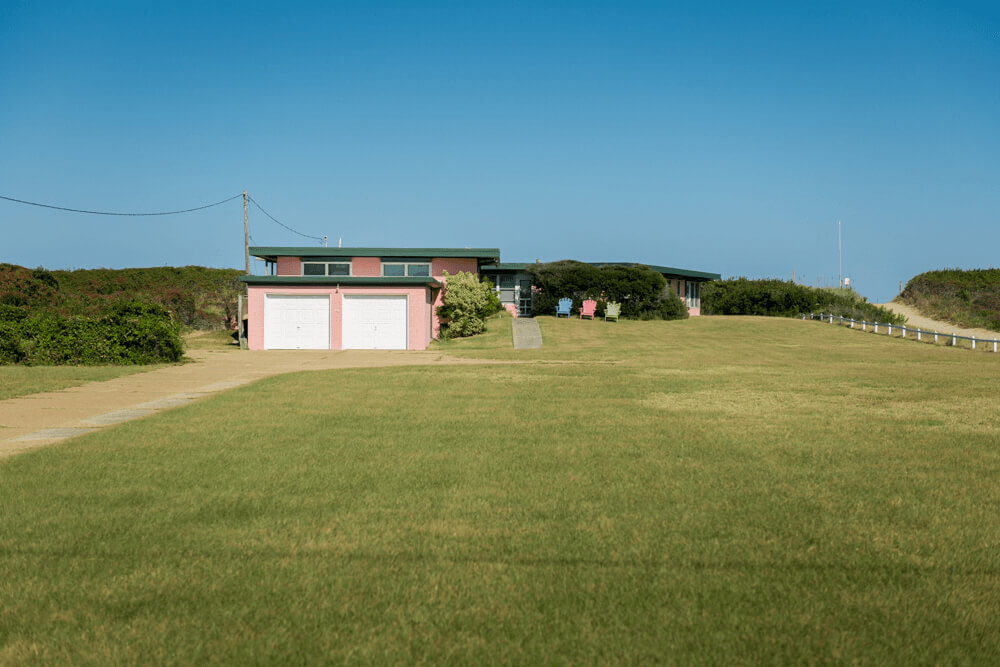 The original juniper paneling, freckled with knotholes, and the beams in the ceiling still give off a wood aroma, more than a half-century since installation.

“I stayed in one in the 1980s, when I was in my 30s,” Knight says. “I thought it was terribly dark and smelly. As I got older, I started to love the classic look of it. I started getting nostalgic.”

She steps over Frank as she passes through to the small kitchen. Early in the morning, Frank can be found at the back door, not waiting to be let outside, but lying on the screened patio to sun himself.

Knight picks up a plastic bag from the table. The bag  contains pieces of cinder block she retrieved from a flat top that was torn down recently. Tiny pieces of shell speckle the concrete chunk, evidence of Stick’s use of local sand to make the blocks.

Ash Pipkin, 76, lives in Raleigh, but he clings to Pink Perfection, a flat-top cottage his aunt Edith built in 1952. It is one of the few still owned by the original family. Stick told Edith if she wanted to build a home in Southern Shores, it would have to be a block house with a no-pitch roof, Pipkin says.

Pipkin remembers visiting often as a teen, when only homes with horizontal roofs dotted the oceanfront.  Climate-control meant opening the many windows to let ocean breezes flow through. Stick accounted for hurricanes and winter storms by adding heavy wooden shutters in the design to protect the windows. Most of the cottages still have brightly painted shutters that match the exterior trim.

Pipkin has no plans to sell.

“We don’t have any intentions of doing anything,” he says. “I can’t see anybody wanting this house outside of the family.”

Laura Martier and her husband, Dan, have rented their flat top from Knight for nearly a year, even though they own a home for sale not far away.

The house has the classic flat roof and a block exterior coated in stucco. The thick juniper beams pass through the interior and overhang outside a couple of feet, offering shade and protection. The exterior trim and shutters are blue. Pinks, blues, and greens are typical accent colors.

One bedroom sits apart from the rest of the house. The space between adds to the flat-top experience.

“There’s always a breeze in the breezeway,” Martier says. “We sit out here all summer long and smoke cigars and drink wine.”

A chalkboard on a table close by carries the greeting “Welcome to Club Breezeway.”

Martier shows off the rest of the home — more small rooms filled with the aroma of juniper paneling and boasting nine-foot-high ceilings — and can’t help but brag about the space. “You never feel like you’re closed in.”

Tours are quick in such small houses, no matter how spacious they feel. It doesn’t take a person — or a dog — much time to get to know a place like Club Breezeway, Pink Perfection, or BoB.