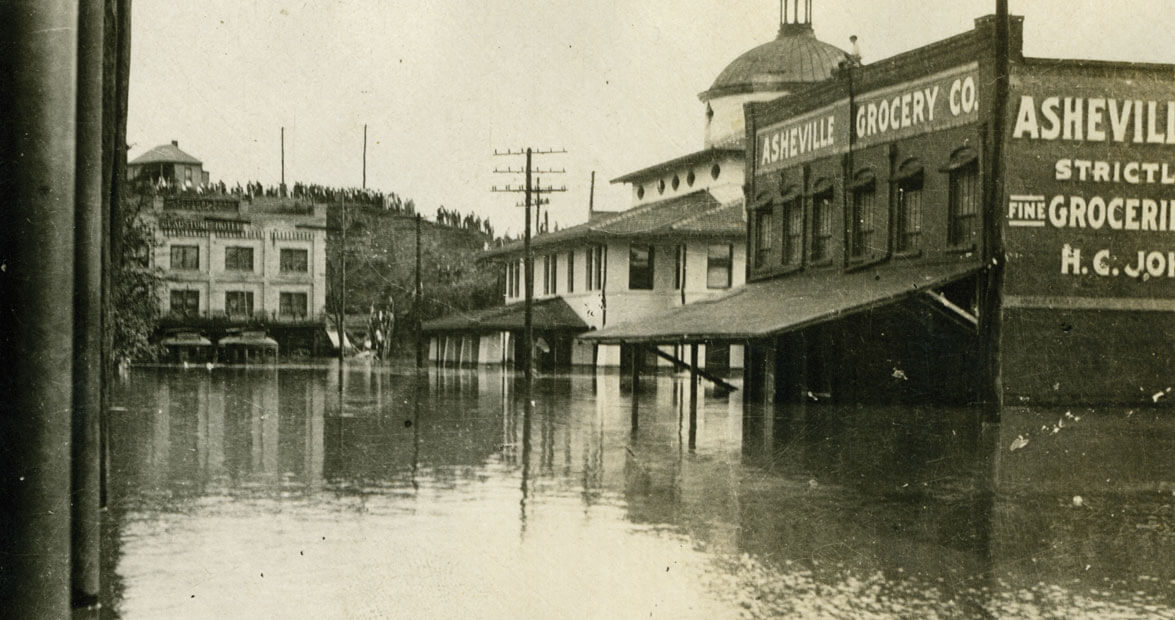 It was Sunday morning, July 16, 1916, just outside of Biltmore Village, and the sun had not yet peeked over the horizon. Kathleen Lipe Carter was just three weeks before her 18th birthday, and she heard her father stirring. He was tying chickens and turkeys to the front porch. Carter’s mother and ailing family members had already left the riverfront home to stay with friends in a second-floor apartment inside the village. But water began to spill over the banks of the nearby Swannanoa River, and it was time for the last of the family to seek higher ground.

With her sister, father, and several boarders who were staying at the home, Carter set out across the Village Green (modern day Biltmore Avenue) and headed toward the Biltmore Estate in search of safety and dry ground. But the farther they walked, the deeper the water became, until the frigid stream enveloped them up to their necks.

“Torrents from broken dams upriver had changed the course of the Swannanoa,” Carter recalled in an account given to the Heritage of Old Buncombe County in July 1986. “We were caught in the middle of a wide, wild river.”

Nowhere to go, except out

Decades before hurricanes had names, when weather wasn’t forecast so much as it was broadcast, it rained for a solid week over western North Carolina. And then it rained again, harder than it had ever rained before.

In 1916, weathermen couldn’t predict a hurricane’s path with much more precision than the Farmer’s Almanac could predict the hour of winter’s first snowfall. Early meteorologists could, however, measure the speed and strength of falling rain. On Saturday, July 15, 1916, the Blue Ridge region saw more rain than anyone anywhere had ever seen since such records had been kept. One spot in Altapass, near Grandfather Mountain, measured more than 22 inches of rain in 24 hours.

When the rain began in earnest before dawn on Saturday, there was already nowhere left for it to go. Nowhere, except out. Out of the riverbeds. Out of the ground. Out of all the neat places nature makes for water and into places where it had never been before, and in some cases, where it would never go again.

When the sun rose on Sunday, July 16, the rain had waned, but the landscape had just begun its transformation. Flooded streets became raging rivers; lazy streams burst open into torrents of deep, deadly water. More than 80 people died. Hundreds of homes were destroyed. There were millions of dollars’ worth of destruction.

It was the flood to end all floods, and the clouds were just beginning to part. 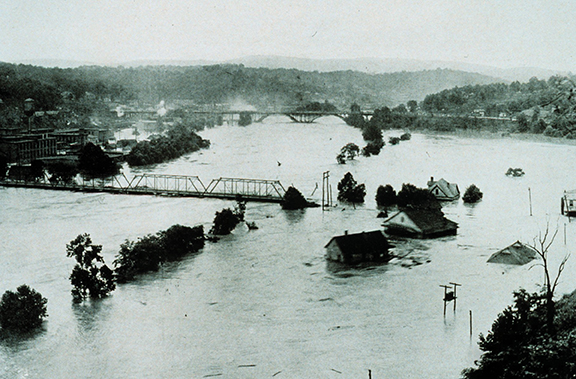 A river claimed the remaining railroad span in Asheville shortly after this photo was taken in 1916.

In the months after July 1916, the U.S. Weather Bureau sent its chief researcher to study this snapshot of weather history. The written account of professor Alfred J. Henry explains that in early July — almost two weeks before the flooding began — a cyclone formed in the Gulf of Mexico and marched up the Mississippi coast, coming to a rest along the crest of the Blue Ridge Mountains.

The skies cut loose on July 5, 1916, and the rain poured for six days. Only when nearly a full week had passed did the weather begin to clear, but the ground was soaked. The water table was as full as a just-poured glass of water, cubes bobbing precariously above the rim.

The people must have been able to see, feel, and smell the water all around. But if it was insufferably wet, if the soil was as saturated as an un-wrung washcloth, they paid it little mind. Perhaps because flooding was so common in this part of Appalachia. Perhaps because the high-water marks reached in 1908 were still so fresh in the minds of many.

“Nowhere in the United States, so far as known to the writer, are the streams subject to such frequent and marked changes in volume and in the degree to which they are loaded as in those which have their source in the southern Appalachians,” the Weather Bureau’s Henry wrote in his report titled “Rivers and Floods, July 1916.”

The early July rains, however steady, kept their distance at first — staying out of homes and off the streets — so they were likely of little consequence to people well acquainted with flooding.

But even as the rain was tapering, another hurricane was brewing, and no one knew that it, too, was making its way west. This cyclone was forming in the mid-Atlantic, and it would make landfall in Charleston, South Carolina, on Friday night, July 14.

“Torrential rains fell on the lowlands a short distance, northeast of Charleston, attended by high winds,” Henry wrote. “By the morning of the 15th, the center of the storm had reached western North Carolina.” 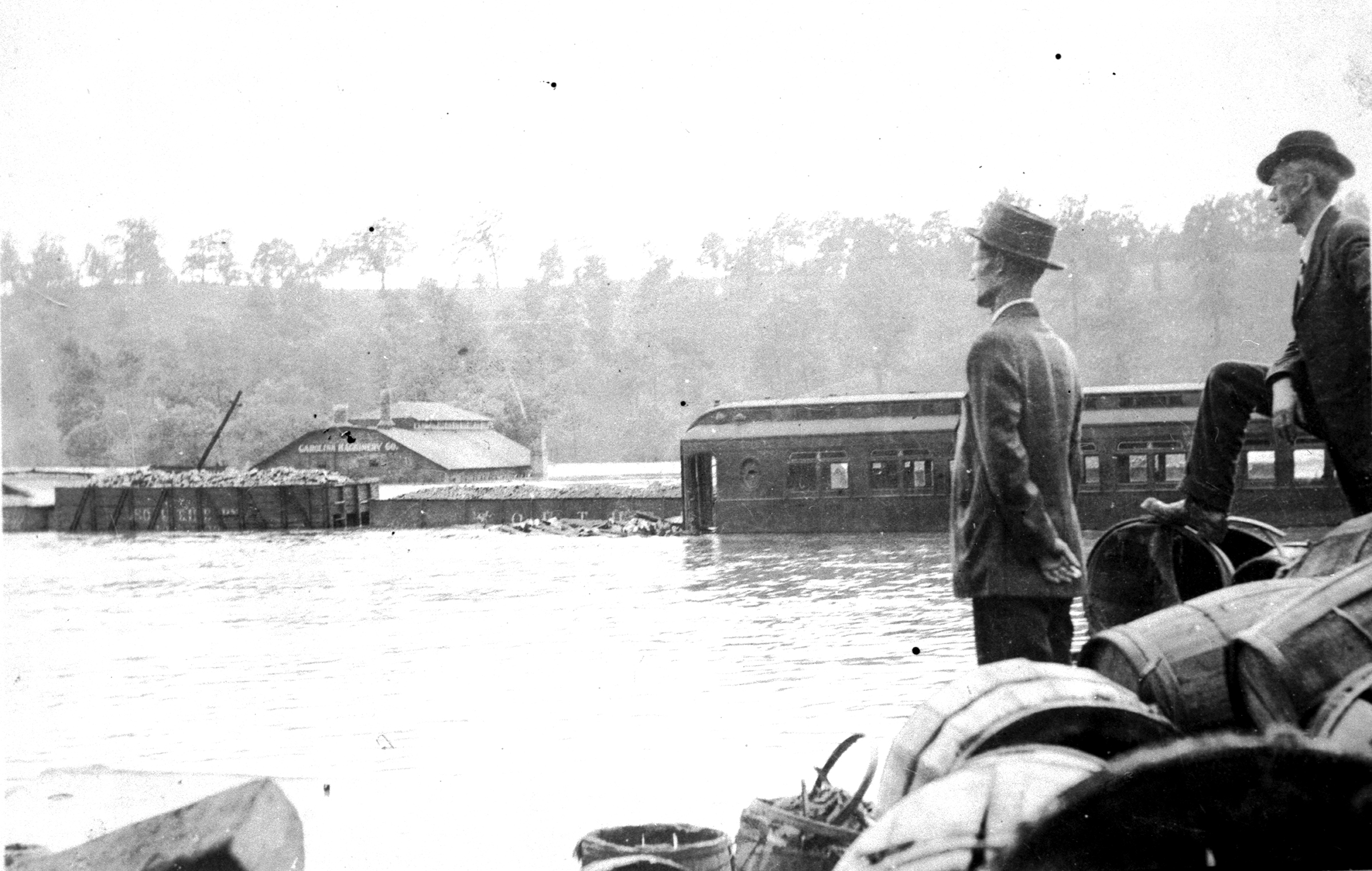 All the people could do after they fled to safety was watch their homes and towns wash away.

The glass, still full, began to spill over almost immediately as the rain started up again that Saturday morning. That rain continued for the next 24 hours. It was estimated that up to 90 percent of what fell remained above ground.

Never before had so much rain fallen in a 24-hour period anywhere in the United States, the Weather Bureau reported.

By Sunday, the rain tapered off. All cyclonic activity disappeared and precipitation was “insignificant,” according to the Bureau.

But with the skies just clearing, the full force of the destruction was yet to come. Floodwaters were just gaining their strength in the hours before dawn on Sunday — a delayed reaction as water upstream gathered and pooled and then broke free again, surging and barreling through the region in violent, debris-laden waves that traveled faster and grew more violent with every mile.

It would take another three days — until Tuesday — for floodwaters to recede.

All around Asheville that Sunday, people were taken by surprise at the speed and volume of the rising floodwaters. Automobiles and streetcars were abandoned midtrip and left in the middle of roads. The water would reach a height of nine feet at the gate of the Biltmore Estate, although the home was spared. All throughout Asheville, people clung to trees and lumber piles, waiting for lifeguards in flat-bottom boats carrying ropes to deliver them to safety.

For nine long hours, Kathleen Lipe Carter, who was caught in the raging Swannanoa River, clung to a maple tree, awaiting rescue as frigid water swirled around her. She watched floodwater sweep her father away, killing him and several other members of her party that day.

In the next county over, the Marshall community saw 53 homes wash downstream. The Madison County town, which sits tucked between the river and the mountain in a low-lying valley, filled with water. It was also reported that 500 excursionists from Knoxville, Tennessee, were marooned in Madison, with only one railway bridge left standing for the entire county. And just east of Asheville, in McDowell County and northeast in Mitchell, flooding leveled much of the landscape, especially along the Eastern Continental Divide.

“Along the riverfronts in the Swannanoa and French Broad valleys, industrial plants have been submerged and wrecked,” the Asheville Citizen newspaper reported on July 16. “The damage in Asheville is estimated at $1,000,000; in Buncombe County the loss will add close to two million to this sum. … From the outside towns and communities come reports of death and havoc to property.” 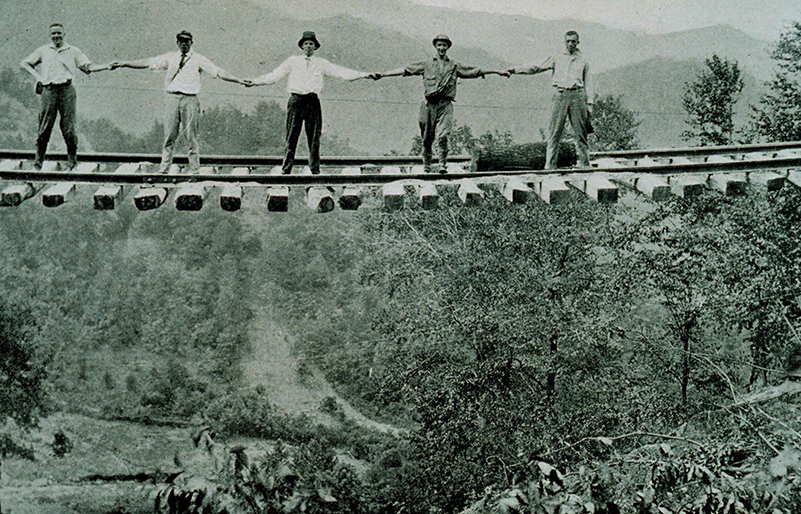 Landslides left this railroad track suspended in mid-air, but these daring men still stood on the rails for a photo.

About 50 miles northeast of Asheville in Avery County that same day, the Linville River was transformed into a terror-inducing tributary. Mrs. Gurney Franklin was a young woman in the community of Linville Falls when the Flood of 1916 hit. She shared her recollections of the flood in a June 1974 interview, saying she most remembered a visit from a woman who lived about a mile away. The woman arrived on Franklin’s doorstep, in shock, after a landslide destroyed her home.

Those same landslides at Linville Falls pushed tons of rock down the mountainside, and into surrounding fields and pastures, where they remain today as reminders of the force and velocity of the floodwaters in 1916.

“It was fairly disastrous,” recalled Ivor Vance in an early 1970 interview. “It cut Asheville off. Asheville was marooned for weeks. … In Biltmore when the Swannanoa runs into the French Broad, the water was as high as the treetops. There was people in tops of trees. I read of a man that was holding two children in the top of a tree but one got away from him and drowned. It’s hard to imagine.”

Even farther east, the flooding was perhaps most dramatic along the Catawba River. There, hundreds of cotton bales clogged the raging river, along with haystacks, chicken coops, sheds, and homes. An entire warehouse was carried away in one swoop. Other industries were simply submerged.

Mount Holly was the uppermost gauging station on the Catawba River, and it crested at an estimated 45.5 feet — estimated because the gauge had been washed away, according to The Floods of 1916: How the Southern Railway Organization Met an Emergency.

Just north of Belmont, even as floodwaters rose throughout the day Sunday, a double-track railroad bridge remained constant with freight trains, most of them carrying produce to northbound locations. Railroad workers toiled throughout the day, trying to remove debris as it washed up against the bridge while alternately jumping off the tracks to make way for the “heavy northbound movement of peaches.”

After working all day, by about 5:30 p.m., 19 men were on the bridge when it finally crumbled, just as a train full of peaches drove past. The water swallowed all 19 men.

Some were crushed under the fallen steel. Others drowned. By the time every worker was accounted for, 10 were dead.

It was said that the sound of the bridge giving way was something like a pistol shot being fired in the air.

Far as the eye can see

In some communities, huge sections of railroad track were left sagging, anywhere from 20 to 60 feet in midair. Landslides had covered the tracks in gravel and rock. Stone-walled wells rose like one-story pillars out of the earth, after the bedrock and soil around them washed away.

About 30 miles of railroad track, between Old Fort and Asheville, was washed away or impassable, according to the Southern Railway publication. Mountain slides buried the track up to 28 feet in some areas.

“Around the next turn we came to the river, and a complete picture of destruction was before us,” said W.M. Bell of Charlotte, describing a ravaged view of the Asheville-Salisbury line from a vantage point near Old Fort. “Not only the railroad, but its very foundations, had been swept away for the best part of a mile.”

Eventually, the railway was reconstructed. Many who lost their homes simply started over again. Farmers replanted crops, and industries rebuilt.

But nearly a century after its destruction, the Flood of 1916 lives in infamy as the flood that changed the definition of disaster.