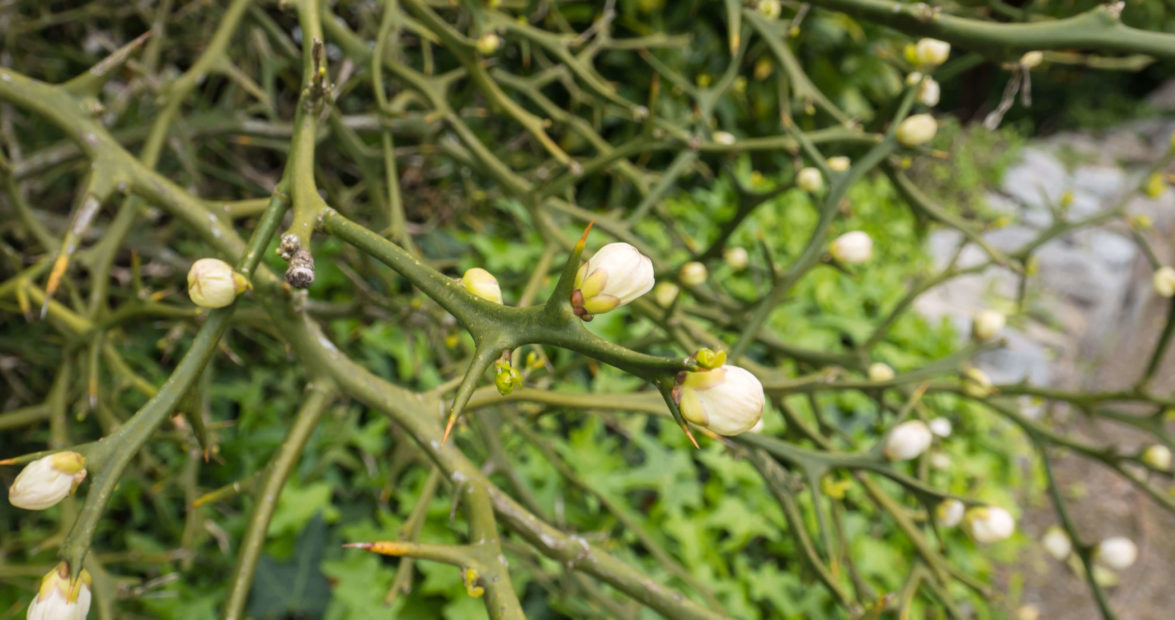 In many of our state’s gardens, dragons lurk. No, not the fire-breathing monster kind, but rather Poncirus trifoliate, or ‘Flying Dragon.’ At this time of year, it is a beauty of a plant — if you adore thorns. This botanical beast is a distorted, twisted creation with claw-like, curved, one- to two-inch emerald green thorns that rake at the chilled winter air. Also called hardy contorted orange, it is closely related to the lemon and lime trees commonly grown indoors, but it will survive outside in all but the highest elevations of North Carolina.

In the summer, this dragon sleeps in a sea of deep green foliage, but come autumn after leaf fall, its long claws are unsheathed. Also very noticeable in early fall are ping pong ball-sized, orange-like fruits (produced from small, fragrant, white flowers in the spring) that can be considered, at best, barely edible due to their super-sour, all-pit, little-pulp nature. The seeds readily sprout, meaning that unless the fruits are picked, this dragon can become aggressive and even invasive in a landscape.

This unusual orange does best when planted in well-drained, slightly acidic soil in partial to full sun. If possible, place the plant in an area where it will be exposed to the low-rising or setting winter sun so strong light and long shadows will accentuate the visual effect of the bizarre green thorns.

‘Flying Dragon’ will remain restrained in habit (if not armament) to form a rounded shrub that tops out anywhere from five to eight feet. One plant will make an interesting addition to the winter garden; 20 plants will form an impervious barrier that will keep dogs, cats, and cat burglars away.

To Do in February

1. Wild vines can cover up a landscape, but now is a good time to tame them. If they have become a nuisance, cut back such invasive vines as wisteria,wild grape, Virginia creeper, poison ivy, Japanese honeysuckle, and bittersweet.

2. If they were root pruned last fall, small woody ornamentals can be moved to a new location now.

3. Just before new growth begins on liriope, shear the plants to make room for the young shoots to come. Clippers will do the job in small beds, but for long border expanses, set the lawn mower up to its highest setting and finish in five minutes or less.

4. Large, showy ornamental grasses such as pampas and miscanthus should also be cut back before new growth begins. In addition, now is a good time to divide large clumps of ornamental grass.

5. Want a sneak peek of spring indoors? Force bloom the branches of such spring beauties as crabapple, forsythia, deciduous magnolia, spirea, redbud, dogwood, pussy willow, viburnum, witch hazel, flowering quince, or ornamental almond, cherry, peach, and plum. Cut branches, put them in a container of warm water, and place them in a room that remains 65° to 70°. Also, change the water at least three times a week.

6. Keep picking spent blooms off pansies to maintain their flower show into the spring.

7. If you had any problems last year with your lawn mower, weed eater, leaf blower, or other such motorized garden helpers, now is a good time to have them looked over, tuned up, or repaired by qualified mechanics before they are swamped with springtime business.