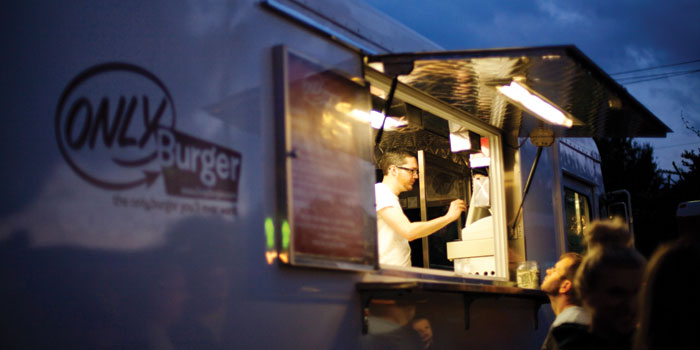 Brian Bottger is not happy. It’s 9 a.m. on a Saturday in April, and, leaning over the computer keyboard in the back of his Durham kitchen, he types, “All the Best for the Durham Farmers Mrkt today we had planned to be there but alas it is not to be We hope to be on the road soon.”

He hits the return key, and his followers on Twitter get the bad news. There will be no burgers with fried green tomatoes and pimento cheese — or any burgers at all — at this year’s opening day of the Durham Farmers’ Market.

The prelude to that message played out like a bad April Fools’ Day trick. A few days earlier, there was a ticking in the engine. That ticking became a loud knocking — which became a huge worry. On April 1, a mechanic declared the truck officially curbed, at least through the weekend.

But Bottger has to keep trucking. He has gigs lined up. A wall calendar hanging above him lists his commitments during the next month in small handwriting. Few days are blank. He has a wedding on this night and a first communion after-party the next afternoon. His plan: to borrow his business partner’s van and rent mobile cooking equipment. And he has only two hours until the weekend lunch crowd starts to roll into Only Burger’s brick-and-mortar location off Old Chapel Hill Road in Durham. There are onions to chop; burgers to patty; and potatoes to slice, dice, and fry.

The kids, the bride, they’re going to be upset, he worries. Later in the day, the grandmother of the child having his first communion calls with an offer to pay to have the truck towed out to the reception. That’s how beloved Only Burger is in the community.

“If this had happened to me last year… ,” Bottger says later, elbow-deep in suds that fill the kitchen’s stainless-steel sink. This did happen last year. It happens every year. Last year, it happened right before one of the truck’s biggest events — the Duke University basketball campout — which Bottger estimates cost his company thousands of dollars. Thank goodness a restaurant now helps keep the business anchored — this engine repair is going to be expensive.

But breakdowns are part of running a food truck — just like this winter’s ice and cold that caused havoc. It’s not the first time, and it won’t be the last. Only Burger will ride again.

Like Only Burger, the stories of the food trucks that circulate around Durham are the stories of the city. It’s up-by-your-bootstraps, do-it-yourself hard work. It is creativity and passion — for food, for people, for community. For a city that often feels overlooked in the shadow of Raleigh and Chapel Hill, laying claim to a trend feels good.

The Bull City has its own character. It’s James Dean with a cardboard pack of smokes rolled into his shirtsleeve, grit combined with urban sophistication. And it’s enjoying renewed confidence coming from aging tobacco warehouses transformed into condos, music clubs, and restaurants with fresh ideas. The New York Times swooped in twice in the past year to give the city its stamp of approval. The paper first mined Durham’s restaurants and in a later article declared it one of the top 41 places in the world to visit this year. Not before you die — before 2012.

The food trucks crisscrossing the city play into this new sense of energy and community. “It’s very collaborative,” says Pam Gutlon, who owns Durham’s Outsiders Art and Collectibles on Iredell Street. She sees firsthand how the city’s art, music, and food prop each other up. Only Burger has parked beside Outsiders more times than Gutlon can count.

“I remember hearing people talk about, with pride, that Only Burger is Durham,” she says.

Birth of a trend

To be certain, mobile dining isn’t new here — the Hispanic population has served inexpensive, ethnic roadside fare for years. But Only Burger was the first to cook the food on the truck and to offer something a little more upscale. Bottger soon started winning fans who are fiercely loyal. It took an early lead among hundreds of other trucks across the country in an Internet contest sponsored by the Food Network. Only Burger finished second, riveting local foodies. It’s no wonder: Its gourmet patties are as juicy as any you’d get off a backyard grill.

When the truck is on the road, you will usually find Bottger inside its sardine-can-size galley kitchen with a couple of other employees, taking turns flipping burgers, taking orders, and chatting with customers. The aroma of sizzling beef and vaporized drippings hangs heavy in the air, and a steady flow of hungry diners lines up at the window.

It wasn’t always like this. In the beginning, Only Burger, a white truck with a brown looping logo on its sides, drew more curious stares than customers.

“There was a lot of setting up on blind corners, just trying to figure it out, and watching a lot of traffic go by,” Bottger says. “It was just me and one guy on the truck, and we’d sit there for hours on end.”

In time, perseverance and a great product paid off, and word spread — often along a social network. With no fixed address, nearly every truck relies on Twitter tweets and Facebook posts to draw customers. When diners follow their favorite trucks on Twitter, they also literally follow them.

“It just makes you feel adventurous when you go track one down off Twitter and order your meal from a window and then try to find somewhere to eat it,” says Chris Rhyne Reid, who covers Durham’s food scene for the popular local website Carpe Durham. “It’s great. I love covering them. I think they bring something that a restaurant can’t necessarily bring in the same way.”

Looking for those magic spots, where they know they’ll find customers, truck operators strike up relationships with local universities, businesses, music venues, and craft breweries. They make arrangements to serve on various days and nights throughout the week.

The Bulkogi Korean BBQ truck, for example, parks most nights in a Wachovia parking lot at the corner of Ninth and West Main streets. When the truck, which serves a mix of traditional Korean dishes along with a selection of “fusion” tacos, is there, a sticky sweet smell wafts over the intersection. On Saturdays, those with a sweet tooth usually find Daisy Cakes, just up the street from the Durham Farmers Market, peddling gourmet cupcakes from a vintage, 31-foot Airstream trailer called Sugar. And on Sundays, KoKyu BBQ, with its duck-fat-fried Tater Tots, draws crowds for a late brunch at the newly opened Motorco Music Hall on Rigsbee Avenue.

Since last summer, Bottger has boosted business for everybody with food truck rallies across the region. What began as a couple of trucks gathered together in various Durham parking lots has turned into events throughout the Triangle that draw hundreds of customers.

It’s funny to think that Durham’s food truck phenomenon owes so much to the hard work of a man who moved to the area in the mid-1990s from Washington, D.C., because he hated his daily commute. Now, Bottger spends his waking hours riding around in a truck, serving up burgers to office workers in Research Triangle Park and students on Duke’s campus, as well as in Only Burger’s small restaurant, which opened in October out of necessity when the truck couldn’t keep up with demand.

“I thought that Chapel Hill was where I was going to go,” Bottger says. “I figured, college town, lots of restaurants. And I discovered that Durham was really the restaurant-foodie kind of town. … It had a really eclectic mix of architecture and a real interesting dynamic as far as people go.”

There was a time not too long ago when Durham residents were reluctant to walk downtown. That was before the farmers market, which opened in 1999, started drawing people downtown during spring and summer weekends. Before the revitalization of the American Tobacco campus brought businesses and restaurants downtown. Before the Durham Performing Arts Center kept the area active after hours.

People now flock to Durham’s downtown. Bottger found that he and his truck — once people tried his burgers — fit right into the renewal. A trend was born.

And, if for some reason Only Burger can’t show up, people fret.

More than a dozen food trucks and trailers circulate in the Triangle. Here are a few best bets and how to find them on the go.Only Burger: Gourmet burgers made with beef from Cliff’s Meat Market in Carrboro. Facebook, twitter.com/onlyburger, and durhamcatering.com/onlyburger. Only Burger’s brick-and-mortar location is at 3710 Shannon Road in Durham.

Bulkogi Korean BBQ To Go: Twists on the thin-sliced Korean barbecue mainstay include a spicy pork taco. A deal at only $2 each. Twitter.com/NCBulkogi

KoKyu BBQ: You can’t go wrong with the short rib twist on the taco, and the duck-fat Tater Tots are a must at $4. Facebook, twitter.com/koKyuBBQ, and kokyubbq.com.

Parlez-Vous Crepe: Something for everyone with sweet and savory varieties of the French classic. La Florentine is a favorite. Facebook, twitter.com/parlezvouscrepe and parlezvouscrepe.com.

Slippin Sliders: Gourmet miniburgers and other sandwiches made from local ingredients: Facebook, twitter.com/slippinsliders, and slippinsliders.com.