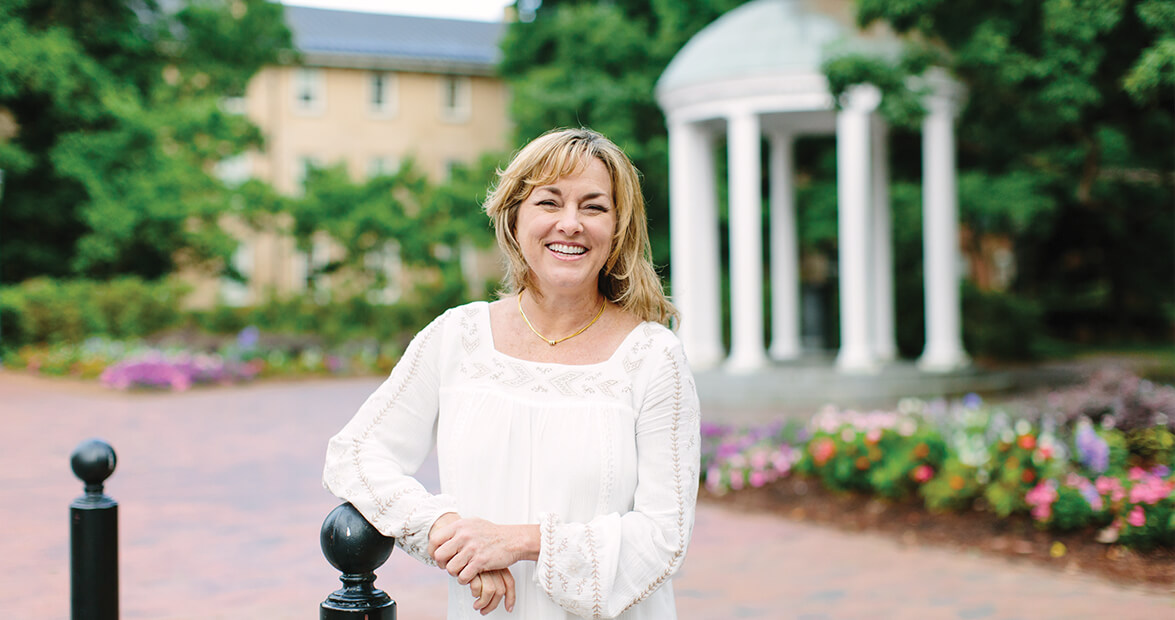 1789: UNC, the first public university, is founded. This historic date is included in our 50 Moments that Made NC.

On the first day of classes at UNC, I tell my students I’m the truest Tar Heel they will ever meet. Their eyes widen when I explain how the university has had its hold on me ever since I was delivered into the hands of Memorial Hospital physicians just a block from our building. They laugh when they learn that I ate corn on the cob in a high chair at James Taylor’s house, lost my first tooth at the Carolina Coffee Shop, and enjoyed my first date at the window table at Spanky’s the summer Star Wars debuted.

They understand “born, bred, dead,” the fast comeback of any Tar Heel whose loyalties are prodded. In its fullest sense, the lyric is the enduring sentiment of all who grow up under Carolina blue skies around the original campus of the University of North Carolina. Chapel Hill, which cradles the nation’s first public university, is the first official college town in America. Since 1789, the town and gown have shaped our state, nation, and world, graduating a U.S. president and vice president, nearly 100 U.S. senators and representatives, international prime ministers, ambassadors and diplomats, astronauts, 13 Pulitzer Prize winners, Oscar and Emmy award winners, and, not least of these, the inventor of Pepsi-Cola. I am but a local now — a townie blessed to be a child of the mother of all college towns.

I cut my teeth on textbooks and Yackety Yack yearbooks as my parents, who were in UNC medical and graduate schools, studied in our Carrboro apartment. Soon after we sold our upright piano to the Cat’s Cradle for $100, we moved to “the country,” near the corner of Weaver Dairy and Airport roads. The Vietnam War was in full swing, but we lived at the end of a peaceful dirt road. Our yard, bordered by pink, white, and red azaleas, bloomed in the shade of 29 dogwood trees and reminded us of the campus we loved. We kept rose beds that rivaled those at Morehead Planetarium. We even laid a brick patio by hand that resembled the ribbons of red pathways that crisscross McCorkle Place. All that was missing in our backyard was an old well.

I was introduced to the alphabet in a classroom at the University Baptist Church. Twenty-six letters decorated the preschool walls on colorful poster board. I steered my fat pencil across thin paper, trying to follow the teacher’s examples. At recess, the whole brood of 4-year-olds squealed and ran across the sand to peer through the fence at another playground next door, also known as Fraternity Court. I learned language basics there at the church, but it wasn’t until around fourth grade that I realized Duke was spelled with one u and not two o’s.

With the occasional exception of Rathskeller lasagna or a Brady’s burger, we ate supper at The Carolina Inn Monday through Friday for years. My mother didn’t enjoy cooking, especially after long days in high heels teaching 11th graders how to conjugate Spanish verbs. Chapel Hill was named after the Church of England New Hope Chapel, which, in the 18th century, stood where The Carolina Inn now stands. Before the inn was remodeled and expanded, it was home to a simple cafeteria where students, professors, and local legends filled their trays with fried chicken, sweet tea, and chocolate éclairs.

Only the place that had defined my childhood could remind me, again, who I am.

Mama would pick me up from preschool and we’d meet Daddy there, along with about a hundred other familiar folks who ate there nightly, unaware that among the regulars in the cafeteria queue were Pulitzer Prize recipients, Nobel laureates, Hollywood actors and musicians, and national champion athletes. I remember names like Charlie Scott, the university’s first scholarship black athlete, and Howard Lee, Chapel Hill’s mayor and the first black mayor of a predominantly white town in the South, stirring the supper conversations around us. Chapel Hill’s civil unrest had begun to subside, and my school saw the end of segregation. We were the first generation of townies to have the opportunity to believe that integration was normal.

The seasons of our lives followed the university academic calendar: Chapel Hill slowed almost to a halt mid-May after students graduated and vacated. In the lull between Mother’s Day and Labor Day, we ran barefoot in the cool grass of the upper quad and caught lightning bugs in Mason jars with nail-pierced lids.

On hazy June mornings, the children of Chapel Hill donned rubber caps and took swim lessons at Bowman Gray Memorial Pool, taught by summer school students who, like Daddy, were most likely retaking biochemistry to improve their GPAs. By high noon, we relocated to the Faculty Club and splashed around until sundown. July meant family cookouts in backyards that still had clotheslines, and fireworks on the Fourth of July at Kenan Memorial Stadium. On the hottest days, we hid indoors at the Varsity and Carolina theaters, enjoying salty popcorn with ice-cold Cheerwine as a chaser.

When I wasn’t at the pool or movie theater, I spent summer days unearthing pointy quartz crystals from red-dirt ditches and pulling fragile stems from golden honeysuckle flowers to taste their one tiny drop of nectar. Sometimes I joined Daddy on his hospital rounds. He showed me drawers full of cadavers’ arms and legs, dismembered and floating in formaldehyde, and then poured me a bubbly Coke in the doctors’ lounge as he talked with fellow residents. We walked in silence to check on one of his patients, a child charred beyond recognition. Something was mentioned about mowing grass and lighting matches. It was there in the hospital that day that I first believed in angels.

In early August, we could hear the UNC marching band’s drumline practicing in pockets of shade near the planetarium as we got groceries at Fowler’s on Franklin Street. The sound was bittersweet — bitter because we knew we’d only have the town to ourselves for a few more days, and sweet because the return of the coeds meant Carolina football was just around the corner.

Back-to-school shopping meant a stop at Eckerd Drugs at Eastgate for fresh pencils and a metal lunch box. If I earned all A’s, Mama and Daddy treated me to a new book from The Intimate, our town’s bookstore owned by Charles Kuralt’s brother, Wallace. It was two stories with wooden floors and stairs that creaked, until it burned down decades later. When it was rebuilt, the new floors had no creaks and, like a body without a soul, the bookshop was never the same.

Fall faithfully delivered a blaze of colors across campus. When only a few brown leaves remained on the branches, it was time to move from the bleachers of Kenan to the court in Carmichael, where the sounds of my childhood changed from outdoor cheers to the staccato squeaks of high-top Converses faking left, then right, on the waxed, wooden floor.

I was heartbroken when Carolina made it to the Final Four in 1977 because I knew I wouldn’t be in Chapel Hill to celebrate with my fellow townies. After 14 years, Daddy’s medical training was complete, and we were moving to the Southwest. I stared out the rear window of our car, blinked a thousand tears from hot, red eyes, and promised myself that one day I’d find my way home again.

Thirty-five years, 14 moves, three kids, and one failed marriage later, I returned to Chapel Hill just before the first day of classes, a Tar Heel in need of healing. I knew I could find hope on the hill. Only the place that had defined my childhood could remind me, again, who I am. I believed my hometown had a good purpose for the adult I had become.

A few months shy of my 50th birthday, I started graduate school at UNC. I was older than all of my professors, but not too old to rush Franklin with 20,000 20-somethings when we upset Duke the following winter. One block from the church where I scribbled my first ABCs, I defended my master’s thesis in mass communication.

On the first day of classes, many of the 30,000 students will stand in a line that winds from the Old Well to The Carolina Inn, waiting for a cool sip that, according to legend, guarantees a semester of straight A’s. They won’t realize until much later that the lessons learned in Chapel Hill were much larger than what they’d gleaned from their course loads. By then, the faces and influences of this place will have become permanent residents in their hearts.