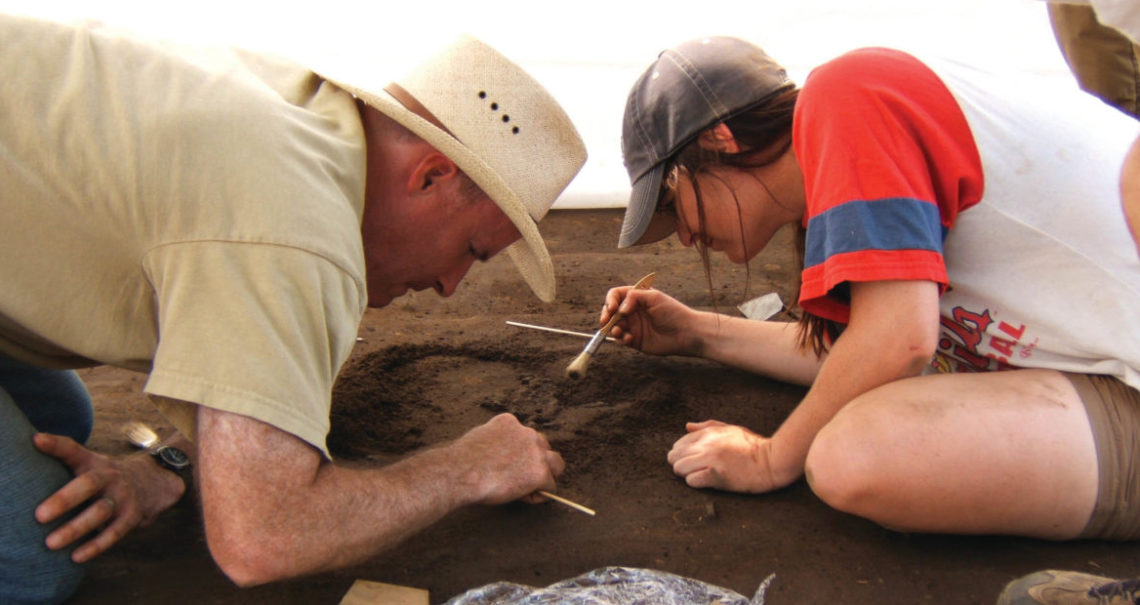 David Moore stoops in the middle of an unremarkable field next to a winding Burke County blacktop — a field that looks like many we’ve passed during a 10-minute drive from Morganton — and picks up a dime-size object that appears unremarkable, too.

He turns it between his fingers, examining it for barely a second before handing it to me and declaring that it’s a fragment of 16th-century pottery. It looks like a rock to me. I mention that.

Moore, tall and bespectacled, points to a snippet of a raised stripe, a tiny feature no more than an eighth-of-an-inch wide and three-eighths-of-an-inch long, on the tan-colored object that is not a rock. He says that if we could see the original vessel, the exterior would be decorated with patterns like the stripe, designs created by slapping the finished pot with a wooden paddle.

Moore is an archaeologist who has been digging in dirt for a long time — and for nearly a quarter of a century at this bottomland on Upper Creek, a tributary of the Catawba River. It’s called the Berry site, named after the family who owns the land.

Archaeological finds at the site, Moore says, indicate that in the 1560s Spanish explorers lived here in a fort named San Juan, built adjacent to an Indian village named Joara. This timeline would make Fort San Juan the earliest European settlement in the interior of what is now the United States — two decades before settlers of “The Lost Colony” vanished from Roanoke Island and 40 years before the founding of Jamestown.

A few months ago, the State of North Carolina erected a highway historical marker about the site at the intersection of Green Street and Bost Road in Morganton. The marker reads: FORT SAN JUAN: Built by Juan Pardo in 1567 at native town of Joara. Served as Spanish outpost until razed by Indians, 1568. NE 4 mi.

Moore is a professor of archaeology and anthropology at Warren Wilson College in Swannanoa, near Asheville. He has a pair of professional partners in the ongoing exploration of the site, fellow archaeologists Robin Beck of the University of Michigan and Chris Rodning of Tulane University. Armed with a host of students, volunteers, and people who pay to sift through the dirt each summer, they have found hundreds of thousands of native artifacts in the field. More significantly, they have unearthed a trove of Spanish artifacts — more than 200. Among the unique finds: pottery, lead shot, nails, and pieces of chain mail.

“To put that in context,” Moore says, “there’s no other site in the Southeast that has a single one of the artifacts that we have found that are not trade items, but items used by the Spanish themselves. These are things that were never traded to the Indians, so it’s fairly powerful evidence of the Spanish being here.”

High-tech scans helped pinpoint the location of five burned buildings, structures that Moore says were much larger than dwellings used by the Native Americans. “We know that when Pardo was at Joara, he told the native chief to build a building for his men and he left 30 men there. We believe the first one was built by the Indians, and we suspect the Spaniards joined in as well.”

Workers have almost completed excavations where one of those buildings stood and are about halfway finished with a second. “There were not a lot of artifacts,” Moore says. “Both of these buildings appear to have been cleaned out, which is unfortunate, but not a complete surprise. What was really exciting, though, was right over here.”

Moore walks over to a large area in the shape of a rectangle. The rectangle defines a spot where soil has been removed, sifted to harvest artifacts, and then returned to fill the hole.

“Right about here,” Moore says, “in the northeast corner of this building, right on the floor, we found the completely rusted remains of what we believe was a scale for weights.”

History says Spanish explorers doled out supplies by weight, Moore explains. Perhaps they employed a simple scale that balanced in the middle — and perhaps that is what has been found. It was difficult to know by simply eyeballing the find.

“It took us a couple of weeks to recognize that it was metal, actually, because it was so rusted,” Moore says. “What we had to do is isolate a column of earth around it and remove that block of earth with the rusted metal on top. We had to keep it from falling apart, so we lifted the whole block of earth without disturbing it. It is so fragile that, as it’s being excavated, it’s going to be destroyed.”

The delicate work will continue at a lab at East Carolina University, Moore says, where objects recovered from Blackbeard’s sunken ship, Queen Anne’s Revenge, have been studied. As the surface of the object is exposed little by little, successive molds will be made. In the end, Moore hopes there will be a three-dimensional mold of what the eroded and rusted metal item looked like. “Then that can be studied to figure out what that actually is,” he says.

The scale, if that’s what the artifact proves to be, would be a compelling piece in a giant puzzle, more circumstantial evidence that Spaniards lived in this place for a time nearly 450 years ago, Moore says.

“In terms of proving that there were Spaniards living in this building, that’s very hard to do,” he says. “But we have found no lines of evidence to contradict our interpretation. We’re never going to find something marked in stone — ‘Juan Pardo was here, Jan. 1, 1567.’ That’s not going to happen. But the evidence continues to mount that they were here.”

A lesson in patience

By the time he took a position with the state archaeology office in Asheville in 1982, Moore had known about the Berry site for a long time. It had been identified as the site of an Indian mound as early as 1891 by Cyrus Thomas, who undertook a survey for the Smithsonian Institution.

In the fall of 1986, Moore set out to try to find evidence to support the relatively new conjecture at the time that North American expeditions by Spaniards Hernando de Soto, and later Juan Pardo, had taken them farther west than earlier believed. He picked three sites to explore: one in Catawba County, one in McDowell County, and the Berry site.

The Joara mound would have been a dirt platform, accessed by a ramp, with a structure used for ritual purposes on top, Moore says. By the time he visited the Berry site, the 15-foot tall mound was a memory, bulldozed decades earlier.

“Back then,” he says, “they knew it was an Indian mound, but they didn’t understand the significance. There was a big hill right there. You can see a slight rise.”

White settlers and their descendants farmed here later. Plowing typically destroys a site. It mixes the soil. Artifacts may remain, often in pieces, but the “context” is gone. New artifacts may be found buried deeper than much older ones. To find “meaningful ground,” Moore says, archaeologists must dig below where plows have turned the soil. The destruction of the Berry site mound, and the subsequent spreading of the mound dirt over a wide area, may have protected ground that would otherwise have been disturbed by the plow.

“If it preserved the rest of the ground, that’s great,” Moore says, “but losing the mound was a loss.”

Initially, Moore received permission to work in a narrow strip of dirt separating a field of clover and a stand of corn. Fortunately, the spot included an area on top of the mound. The soils he and about 100 volunteers unearthed revealed a story. “I was able to demonstrate it was a man-made mound. I was able to show that it was built by people dumping basket loads of dirt.” The dig also uncovered artifacts that pointed to 15th- or 16th-century native inhabitants.The native inhabitants of Joara, Moore says, probably were ancestors of people who became known as the Catawba Indians — a tribe that represented remnants of more than a dozen different groups descended from the Mississippian culture of Native Americans.

Combing through the soil

It would be eight years after Moore’s initial dig before the Spanish thread entered the narrative. Rob Beck was the nephew of the Berry family that owned the site. He had grown up collecting artifacts there. In 1994, he called Moore and said he’d found some unusual pottery.

Beck told Moore that experts in Georgia had identified Spanish pottery fragments he’d found at the Berry site. During his 1986 work at the site, Moore had found pottery, too; but those pieces had been identified as the handiwork of 18th-century Moravians. They compared shards.

The pottery “was exactly the same,” Moore says. Subsequent studies indicated that it was Spanish, circa 16th century. Later that year, Moore and Beck co-authored a paper suggesting that the Berry site was the location of the native town of Joara and of Fort San Juan.

Every summer since 2001, crews have spent several weeks combing through the soil at the Berry site.

“It’s getting quite well-known,” Moore says of the Berry site and its Spanish connection. “It’s very, very significant. It’s 20 years before ‘The Lost Colony.’ And the story of the native peoples is equally significant.”

There are, he says, plenty of questions about the place.

What did the Indian village look like? How many houses were there? How were they built?

Was the Spanish compound enclosed? What was the purpose of the bundles of river cane that have been found?

A wood expert at Penn State University is studying timbers used in the Spanish buildings — and may even be able to pinpoint the season of year in which the trees were felled. An ethnobotanist from Washington University in St. Louis, Missouri, is exploring what foods the people ate and how they prepared them.Records note that San Juan was the first fort Pardo built, but that he also constructed five others in what is now the Carolinas and eastern Tennessee. “This is the only one we’ve come close to identifying,” Moore says. “That’s why the work we’re doing is so fascinating. We would like to have a picture of it.”

The most baffling question, though, is where did everyone go? After the Spanish disappeared, so did the Indians. One hundred years after Fort San Juan was destroyed, no one was living in the area.

“We don’t have a good explanation for why thousands of Indians would leave a perfectly good region after having lived here for hundreds of years,” Moore says. “This is why we need to do much more research.”

At one time, he adds, 20 or 30 Indian mound sites had been documented in the Tar Heel state. Now only about 10 remain. Sites where Native American towns once flourished are disappearing, too.

“Joara was the largest of many native towns in the area,” Moore says. “These villages are found throughout the region. We want to study as many of these places as we can over the next 10 to 15 years — before they’re all gone. We are fighting a battle against time and development.”