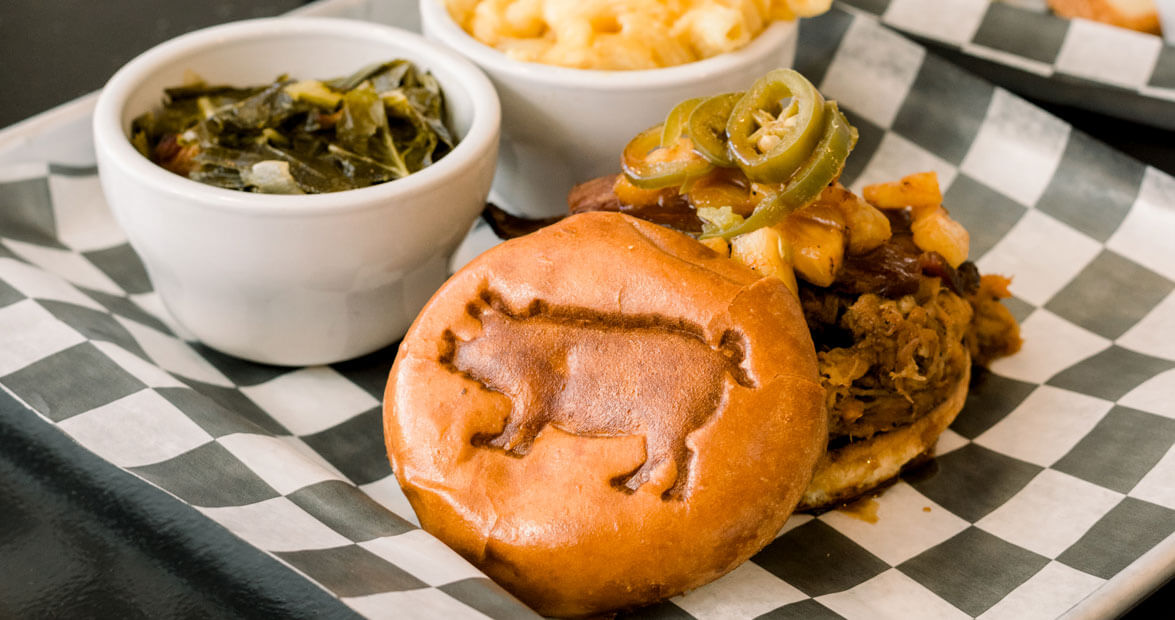 In Fayetteville, a stone’s throw from downtown and the historic Haymount district, an “Angry Hawaiian” has nothing to do with a disgruntled transplant from Waikiki and everything to do with a sandwich of smoked pulled pork or chicken laden with grilled pineapple, Benton’s bacon, and “kicked up” spicy teriyaki. The whole mess of goodness is heaped beneath a bun stamped with a silhouette of a pig, and cozied next to double-fried, beef-fat french fries. Pick up a bottle of Cheerwine or orange cream soda from an ice-filled metal bucket, or choose from dispensers labeled Southern Tea, Northern Tea, or Not Tea (aka water). If you’re from up north, as one customer is, drawn from I-95 by rave reviews on social media, owner Wade Fowler will explain that Southern Tea is sweet, but because Southerners are so sweet, he’ll be happy to stir your Northern Tea with his pinkie if you want it sugared.

Then again, Wade’s son David would be happy to suggest a wine to pair with your meal served on a humble metal tray. After all, David is a certified sommelier, something that, like the rack of wines displayed on the wall, you don’t usually find in a barbecue joint. But despite appearances — decor includes the requisite pig pix — Fowler’s is a different animal. It’s gourmet barbecue, meaning that most everything on the blackboard menu is made right on site, from the sauces to the Caesar salad dressing, from the pickles to the ketchup: a thinner, spicier version made with raw tomatoes and onions steeped in mustard, cinnamon, cloves, brown sugar, and vinegar.

And most everything on the menu — except that pineapple — comes from North Carolina. “We use a heritage-breed pig called the Cheshire pig, raised in Goldsboro,” Wade explains. “Cheshire pigs are raised to be a pig instead of a big chicken.” Most of today’s pigs are raised to be lean, but, “when it comes to pork, fat is flavor.” Many of Fowler’s chickens, so clean that Wade calls them “naked chickens,” come from Joyce Farms in Chapel Hill. The oak burned in Fowler’s smokers comes from Wade’s nine-acre property in Fayetteville. The church pews against the restaurant walls were originally in University Methodist Church in Chapel Hill. Outside, the only flag hoisted on the pole is North Carolina’s. 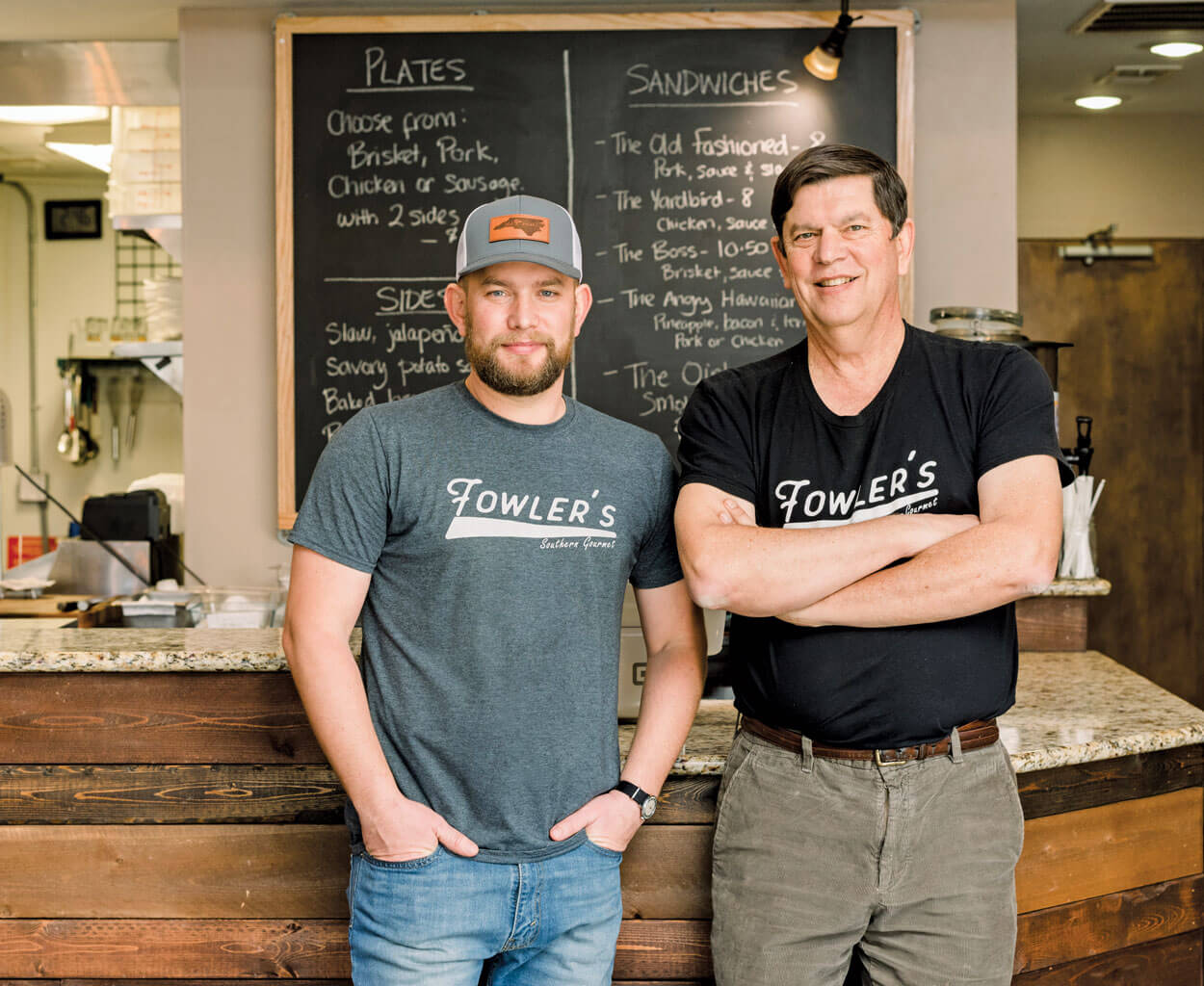 In season, Wade Fowler (right) makes a sauce using blueberries from the 80 bushes on his property. His son David, a certified sommelier, will pair your pork with the perfect vintage. photograph by Faith Teasley

Today, the line of lunch customers, including servicemen in camo fatigues, a City Hall denizen in a suit, and a woman taking pictures of the menu to send back to her office colleagues, are here for the special, which will sell out before closing time at 2 p.m.: brisket burnt ends.

“A brisket has two muscles: the flat, leaner end and the point, which is the fattier end,” Wade explains. “For burnt ends, you take the point and smoke it, then cube it, then braise it in a barbecue sauce with extra butter and brown sugar.” Transplanted Texans have told the Fowler’s folks that they’ve finally found somebody east of the Mississippi who knows how to cook brisket. But all you really need to know is that after Fowler’s finishes their burnt-ends magic, “it comes out like beef candy.”

All you really need to know is that after Fowler’s finishes their burnt-ends magic, “it comes out like beef candy.”

Fowler’s began in April 2017 as a food truck, and at one of the weekly food truck rodeos downtown, they served 168 people in less than two hours. The food truck still makes a Friday night appearance at Bright Light Brewing Company, but when a former restaurant space became available, partners David, Wade, and Polly Willett jumped. David and Polly both had extensive experience — 12 years in restaurants and eight in the beverage industry in Naples, Florida, and Southern Pines. In February of 2018, the trio opened Fowler’s Southern Gourmet on Rowan Street. Another chef is begging the team to open a Fowler’s in North Raleigh, but right now, “We’re up to our neck in alligators,” Wade says. “We’ve only been at it a year, and we need more time to work out the system before we open another one.”

Not on the menu: alligators. But smoked potato salad is. The spuds are cubed, softened by boiling, then smoked and sauced with dill, capers, chives, and Dijon. And while squeeze bottles of house-made sauces are arrayed on the counter — tagged Sweet, Piedmont-style Blind Pig Vinegar, and Tangy (thanks to notes of citrus and tamarind) — you’ll also find good ol’ Texas Pete, because, as the label plainly states, “Gotta have it in a barbecue joint.”

And as for the wine that pairs with smoked and slathered, coated and crisp, soft but chewy, sweet but tangy? The sommelier suggests a Syrah.