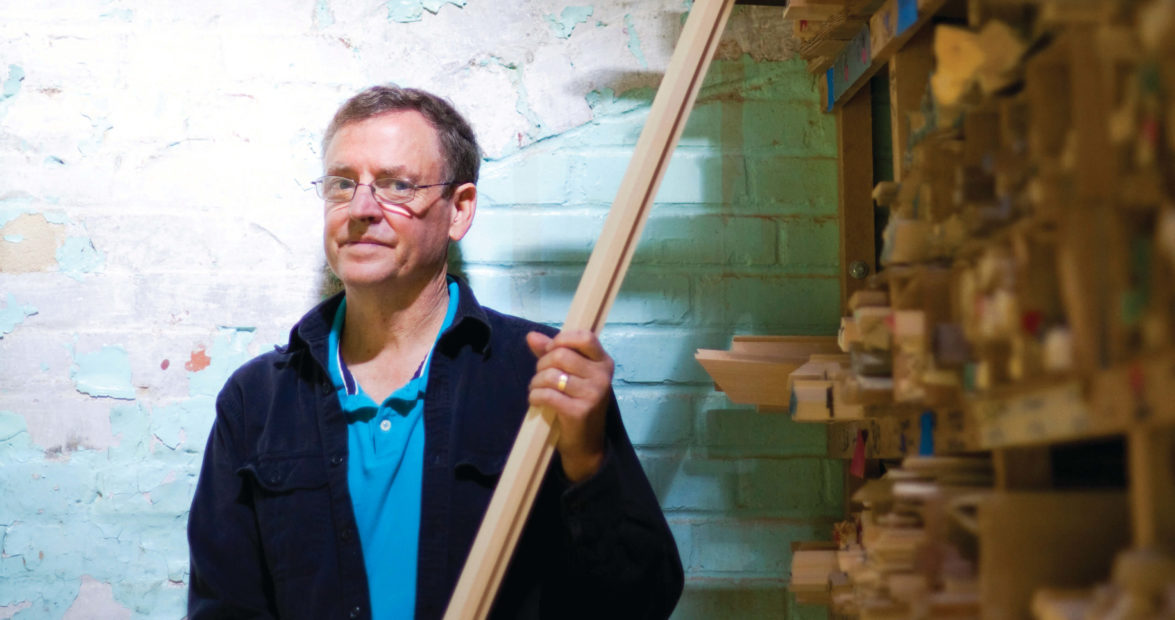 For a guy who makes frames for a living, Edward Wright spends a lot of time thinking outside the box. He tinkers endlessly with new finishes. He personally delivers his frames to retailers, seeking input on ways to improve. And his process for interviewing an office manager won’t be found in any textbook.

But his restless and innovative ways are largely responsible for the success of his wholesale business, Frames by Edward Wright, which makes handcrafted, gilded frames using Old World techniques and materials.

‘The pride is there’

Wright works with three other artisans in an airy shop in an old textile mill in Hillsborough. The space is plain. Ancient wood floors chalky with gesso. Racks of raw-wood molding. Carving samples attached to the wall. Stout worktables darkened by years of shellac and glaze drips. Tired armchairs resting on a stair landing, the site of staff meetings.

Wright and his artisans build frames from scratch, using materials and tools that have been around for hundreds of years. Basswood molding. Chisels. Gesso. Tinted-clay paint. Gold leaf. Squirrel-hair brushes. Agate-tipped burnishing tools. Shellac made from secretions of the female lac bug.

They use old techniques and materials not because they’re trying to make their frames look old but because the older materials and techniques suit their work. For example, gold leaf adheres better to clay paint mixed with glue than it does to acrylic paint. Shellac, which is made with alcohol, can be removed with alcohol; polyurethane finishes cannot.

“Almost every step of our process is reversible,” says artisan Brooks Ann Camper. “If you get down the road, and in the end, it did not turn out the way it needed to, you can go back.”

Relatively few shops make frames from scratch — a practice called closed-corner framing because the corner seams are invisible — and Wright’s business is even rarer because each frame is done by one artisan.

“The pride is there,” he says. His artisans sign and date their frames. “The ownership is so intense, I have a really hard time even making suggestions.”

The solitary devotion of a skilled artisan appealed to Wright when he started exploring frame-making in his early 20s. He was working on a degree in religion and classics at the University of North Carolina at Chapel Hill, but he already had ditched the idea of becoming a preacher.

About the same time, Wright went to a friend’s garage and nailed together a honey-colored wood frame for a piece of stitchery that his wife made for his sisters. The crewelwork hot pink flowers now hang on Wright’s office wall.

“I did this and fell in love with framing,” Wright says of his earliest work. “It was kind of strange.”

Strange because Wright was only vaguely familiar with woodworking. He swung hammers for his father, Eden builder Homer Wright, but the work hardly flipped his creative switch.

He wasn’t especially artistic but loved the simplicity of framing. Intellectually woozy from years of abstract thinking in religion and philosophy classes, he found peace in the finite and immediate nature of making something with his hands.

Then Wright found a Durham man who did every step by himself. “I was captivated by the whole process,” Wright says.

In 1973, Wright teamed with artist Bev Dixon, and they framed pieces on Dixon’s back porch in Pittsboro. A year later, they started a business called Framemakers.

For years, Wright did custom framing while teaching himself how to gild and finish. “He would have gold leaf in his eyebrows and shellac stains on his hands,” says Verna Jarrell, who worked with Wright for years. “Once he got hooked on gold leafing, I think there was no turning back.”

A fountain of ideas, Wright offered classes on gilding and antiquing, something no one in the area was doing at the time. He closed the shop on Wednesday afternoons so his team could work uninterrupted. When they came to an impasse, Wright brought in a psychologist to help them with their issues.

“He always tried to include people who were marginalized,” Jarrell says. “He’s a very democratic fellow. He sees the value in all people.”

A few years ago, Wright helped one of his children, Allison, who was born with Down Syndrome, establish a small business called FrameWright. Using a computerized carving machine, Allison, 25, makes wooden mirror frames and custom pieces for woodworkers and furniture companies. A manager runs the business side.

He continued his innovative ways when he launched Frames by Edward Wright. He invited potential employees to all-day workshops where they made 8-by-10-inch frames. Everyone who works for him should know how to make a frame, Wright reasons.

It was an unconventional but refreshing approach to interviewing, says Wright’s office manager Arin Lowe, who was hired after she completed her frame. “Nothing about this job is typical,” she says. “I’ve worked the 9-to-5 job. This job has a lot more freedom and is more enjoyable. To go back to a different kind of office — I don’t think I could.”

Wright’s employees — they’re all women — thrive on the independent nature of their work. Artisan Donna Tabor sniffed out Wright’s shop after reading a newspaper story about his work. A stay-at-home mom who had just taken a furniture-finishing class, Tabor hoped to find flexibility in frame-making. Wright agreed to let her work at home.

“He’s open to new ideas and the freedom to work the way you want to,” Tabor says.

Earlier this year, Wright adopted a suggestion from Camper. He created a website to sell directly to artists and photographers.

“I thought it was a great idea,” Wright says. “That’s the challenge of this business — to make sure things like that can happen.”

In pursuit of perfection

Because of their expertise, Wright and his artisans get some challenging orders from retail shops. A recent order involved a nine-foot-tall German opera poster done in 1898 in the Art Nouveau style. For that, Camper built an unusually deep, reinforced frame with a tarnished silver finish. The collector loved it.

The shop’s handiwork also surrounds pieces in the North Carolina Museum of Art, the Ackland Art Museum at UNC, and the Nasher Museum of Art at Duke University, as well as the homes of private collectors.

“We have a number of people who come and look at our stuff, and one of the things they often comment on is the quality of the framing,” says Craufurd Goodwin, a Duke University economics professor and Hillsborough art collector. “He’s just extraordinarily talented, and he has an equally extraordinary staff working with him.”

Goodwin says he can walk into an auction house and quickly spot pieces framed by Wright. “His use of color is special,” Goodwin says. “It’s an openness to using color reflective of the palette of the piece.”

Wright works hard for compliments like that. He always fiddles with finishes, trying to come up with something no one has seen before. When he finds it, he’s rarely satisfied for long.

Wright concedes he’s hard to please, always nudging himself and those around him to improve. “I think that’s part of an artistic temperament,” he says.

Consider the distressed, antiqued gold finish that he has been chasing for 15 years. He ran into technical problems. Recently, his artisans came up with a way to make the finish work.

“Have I gotten what I want?” Wright asks. He hesitates. There’s cheerfulness in his voice. “I’ll probably, in the next couple of years, say, ‘Let’s do it this way.’”