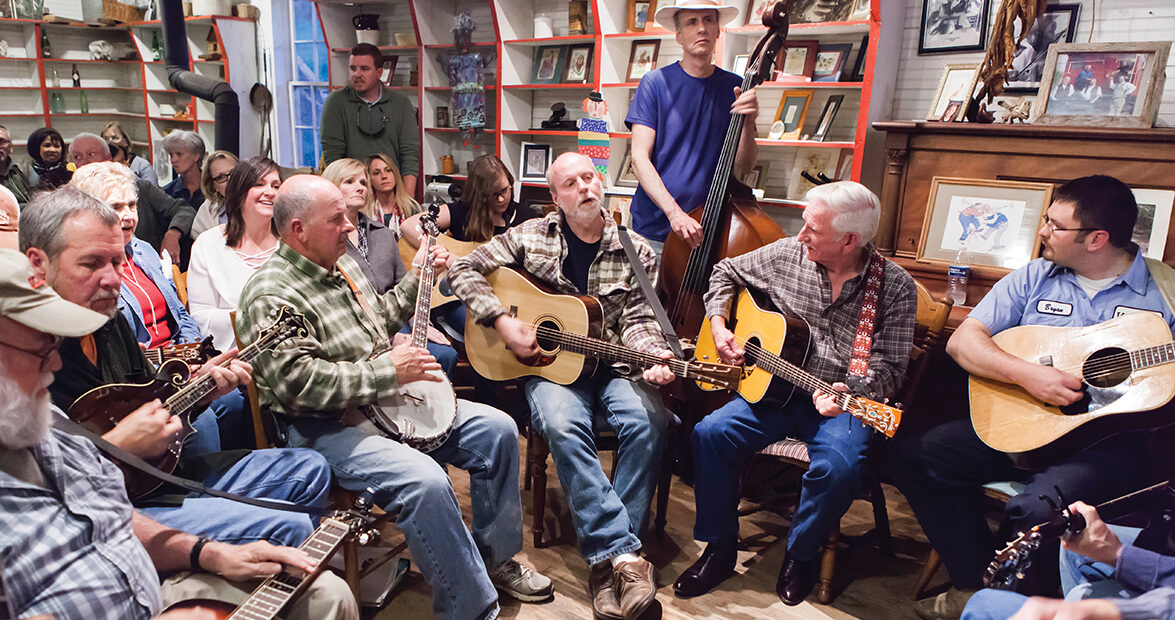 The old-time and bluegrass musicians are perched in one of Phipps Country Store’s front windows, keeping time and singing stories, their banjos, fiddles, guitars, and mandolins echoing through this nearly century-old white frame store. Those gathered around, listening, shout their enthusiasm for their favorite songs: “Crooked Stove Pipe,” “Whiskey Before Breakfast,” “Forked Deer,” “Orange Blossom Special.” “You can really hear the Scottish and Irish sounds in this music,” says Rita Scott, founder of Phipps’s Friday night jams and an old-time fiddler.

In rural Lansing, in Ashe County, Phipps sits across from Silas Creek and the greenest pastures you’ve ever seen. For decades, it served as Rita’s family’s general store. The store has since closed, but eight years ago, Rita, an Ashe County native, reopened Phipps as a gathering place for musicians. “People come here to forget their troubles,” she says. “It’s about the community; we’re like family here.”

Over the years, big-time names have played here: the Kruger Brothers, Wayne Henderson, Steve Lewis. There’s Kenny Price — whose father, Fred, played with Doc Watson — tapping his toes and drawing that bow back and forth on his fiddle like his life depends on it.

Greg Troxell’s been playing bass and guitar for more than 30 years, and when he’s not kicking up his heels with Rita’s mother, Robertine, he’s in that front window, strumming chords. “It’s inside me,” he says of the music. “It’s in my soul.”

Tuning their banjo and fiddle, and warming up not just their fingers but also their nerves, are first-timers Gavin and Hannah Parsons. They’re 10 and 12, respectively, and have been playing for almost a year. “They’re here for inspiration,” their mother, Jenny, says.

Not everyone here knows each other, and not everyone has played together, but you wouldn’t know it. There’s an unexpected fluidity here. “You have to size up the group,” says fiddler Don Mikush, a “bashful jammer” whose joining the group was made easier by Rita. “She’s really the heart and soul of this place,” he says. “She opened her arms to me, and does to everyone here.”

And that’s what you get at Phipps: a group of people you may have never met before, but whom you leave feeling a fondness for, and can’t help but smile about weeks later. “I like it,” says longtime local Scott Neaves. “It’s a real friendly place.”