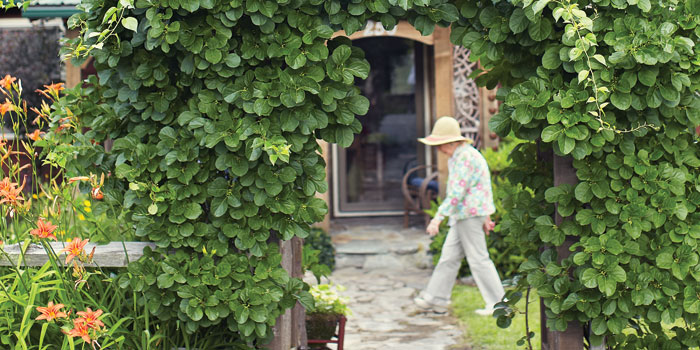 When you visit Frieda Jones, you won’t find her alone. Something about her attracts people.

She’s an 86-year-old grandmother who never quite reached five feet.

She’s a visionary, and visionaries surround themselves with doers.

In return, she offers inspiration, she provides an example of a well-lived life, and she shows people how to make the most of every moment.

In this particular moment, Jones stands in the arched gateway leading into her yard that lies in the bend of Morris Street just off of Main Street in Blowing Rock. Today, her cottage garden is one of seven stops on the Blowing Rock Garden Club’s Mile of Flowers, a walking tour that highlights the top gardens in town.

“When I first agreed to be on the garden tour, I thought it was just garden club members who would come through,” she says. But today, about 200 people will mill through her yard, and she’s ready for them. She might not have expected all of them, but she sure is happy to see them.

Jones isn’t from Blowing Rock. Almost no one is from Blowing Rock. It’s one of those towns that attracts people looking to settle down, seeking out a slower pace. The quaint main street with designer clothing shops and upscale restaurants doesn’t cater to young people exploring their purpose in the world. It’s a tight, two-mile detour off of U.S. Highway 321 that invites a certain set.

The town serves as a retreat for retirees, a place to enjoy the rewards of life’s work.

In North Carolina, when people choose to retire, they seek the edges. For years, their jobs hold them in the middle, anchored by big business in big cities, so when they reach their limit, they head east or west.

Those who choose the mountains like to be surrounded. They know the region’s limitations — cold winters, curvy roads, compact spaces — but places like Blowing Rock have a way of attracting people, too.

Jones and her husband, Bob, moved to Blowing Rock in 1981 after retiring from their careers in Charlotte. Bob sold real estate. Frieda prepared meals in the executive dining department of Wachovia.

When they first retired, they split their time between a log cabin in Chapel Hill and a place in the mountains, but Frieda believes in simplicity.

“I thought it made sense to settle in one place,” she says.

So the couple purchased a tiny cottage that contains less than 1,000 square feet, on a tiny lot that measures less than an acre, in a tiny mountain town that holds less than 1,500 full-time residents. That should slow them down, they thought. Less space, less worry.

Jones looks up at two Fraser fir trees that now tower a couple of stories high. Those trees stood in the living room on her and Bob’s first two Christmases in the cottage.

“My husband was a yard person,” Jones says. “I didn’t have a green thumb.”

But here she stands, in her yard that looks like it came out of a garden catalog. Jones might not be a professional gardener, but she knows what she wants her yard in downtown Blowing Rock to look like — a tight, tidy showplace. And she knows the people who can make that happen.

Against the wooden fence that lines the back of Jones’s property, a scarecrow stands with its arms open wide. This scarecrow has an apron instead of overalls, ruby slippers instead of boots, and a big pot of verbena instead of a straw-stuffed head. Jones calls it her garden lady — a figure designed to welcome instead of scare away.

Jones didn’t make the lady. She’s not an artist, but she knows someone who is.

She met Margaret Hobé at the Blowing Rock Antiques Center in downtown about 11 years ago. Hobé isn’t from Blowing Rock, either. The town attracted her and her husband 18 years ago when they wanted to escape the California freeways. After years of rush-hour traffic, a town with curvy, two-lane roads sounded like a good place to be.

Hobé and Jones like the same things. They have similar tastes in antiques: primitive, down-home collectibles with a story behind them.

“I can’t say I buy things that are brand new,” Hobé says. “The fact that somebody else had used that piece adds a little bit of nostalgia.”

When Jones saw a picture of the garden lady in a magazine, she called Hobé to help. They found old fabric, and Hobé repurposed it as the lady’s dress, apron, and stockings. She worked day and night to finish the lady before the tour.

Now the garden lady is ready, too. She’s dressed in her best with a posy in her pocket.

A gate made of rough logs, sticks, and twigs opens into Jones’s yard. A rock walkway on the left leads up to the cottage, and one on the right curves down the hill. A split-rail fence creates a border between the yard and Blowing Rock Elementary School, just across the street.

“It seems like it grew out of the land,” Jones says of her garden. She isn’t a designer, but she knows someone who is.

Jones found Remo Pirraci 30 years ago when she needed someone to refurbish her basement. Jones is particular, but Pirraci, a do-it-all handyman, suited her. He isn’t from Blowing Rock, either. The town attracted him and his wife when the rapid pace of their native Long Island began to wear them down.

“It’s a liberating thing to come up here,” Pirraci says. Somehow he finds freedom in this town built on restraint, hemmed in by mountains.

He uses building materials from the woods around his home to make Jones’s yard feel like it fits. She mentions his name often as she points to things in the garden. Nothing seems pretentious. Nothing seems out of place. The whole yard feels like an open invitation.

Whether she’s having lunch with friends at Eat Crow on N.C. Highway 105, or serving her homemade chicken salad in her little living room, or driving her silver Volvo to visit her daughters out of town — Frieda Jones surrounds herself with people.

Six years ago, she celebrated her 80th birthday in Chapel Hill at The Carolina Inn. Fifty guests attended the weekend festivities. They told stories, drank wine, and laughed a lot. As a birthday gift, they penned handwritten letters to Jones telling her how important she is to them. One woman drew a caricature of Jones with a big glass of white wine.

Jones doesn’t stop. She believes in simplicity, but she also believes in making the most of every moment. So in this moment, as she stands in her tiny yard, in this tiny mountain town, she sure is happy to see all of these people.

In this moment, she has exactly what she wants.

Leah Hughes is an associate editor at Our State magazine. Her most recent story was “A Place to Pause” (January 2012).