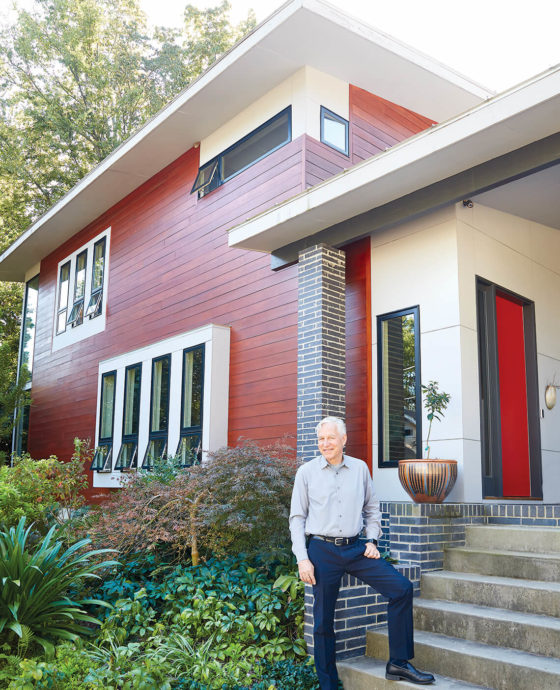 In 2013, Raleigh’s historic Oakwood neighborhood found itself in the international spotlight when longtime residents protested the appropriateness of a contemporary home under construction on Euclid Street. The controversy pitted neighbor against neighbor and the Raleigh Board of Adjustment in opposition to the city’s Historic Development Commission. It generated press coverage in Dwell, Vanity Fair, The New York Times, and London’s Daily Mail. In time, homeowners Louis Cherry and Marsha Gordon were allowed to complete their 2,100-square-foot dream house. And eight years later, a deep friendship has emerged from the ordeal.

Today, when Oakwood resident Matthew Brown hops on his bicycle and cruises over to his buddy Cherry’s home, the half-mile trip is a journey forward in time, from the 19th century to the 21st century. Brown is a highly respected historic preservationist who’s restored three Oakwood homes, including the one he lives in — an 1896 structure on nearby Person Street known as the Lamar-Brown-Arthur House. It’s a wondrous paean to the ornate details and sumptuous interiors particular to the Queen Anne architectural style.

Brown, who serves on the board of directors of the Society for the Preservation of Historic Oakwood, has researched the history of every house in the neighborhood, which was designated a National Register Historic District in 1974. When he moved to Oakwood in 1986, he paid $270 a month to rent half a house. Today, he tells colorful stories about the area’s beginnings in the 1870s, when chickens and livestock roamed freely and horse-drawn buggies traversed the dirt roads. 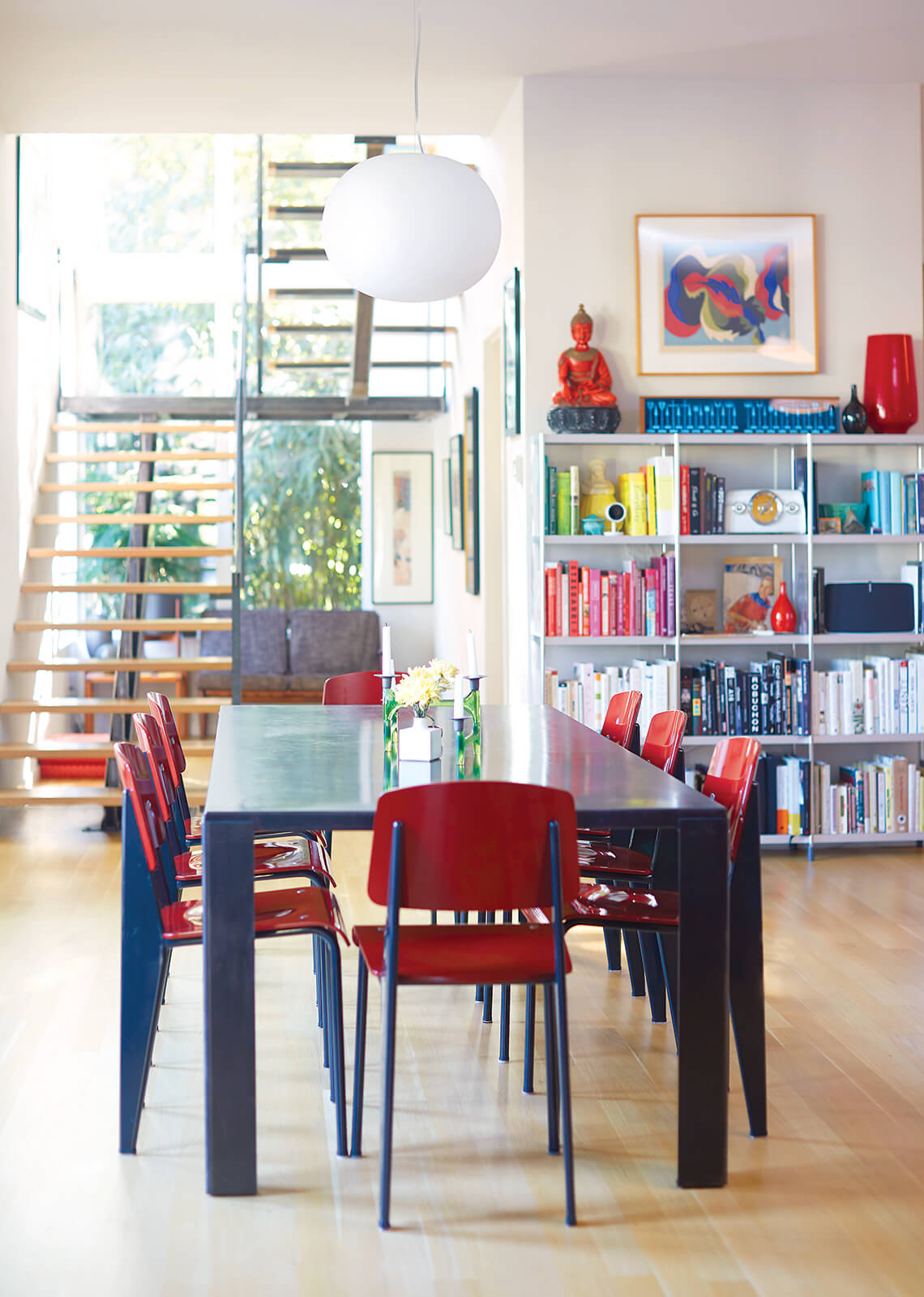 Cherry, by contrast, is a celebrated modernist architect whose designs include light-filled libraries in Chatham, Durham, and Wake counties; the JC Raulston Arboretum’s visitor and education centers; the Unitarian Universalist Fellowship of Raleigh; and buildings at the Penland School of Craft near Spruce Pine. Cherry has helped shape the Triangle’s dining scene, too, by bringing both form and function to a dozen restaurants, including those of culinary stars Ashley Christensen (Death & Taxes, Poole’side Pies) and Scott Crawford (Crawford and Son, Jolie). And Cherry has created stunning residential homes that are both aesthetically refined and environmentally responsible.

Brown and Cherry first met decades before, in the 1970s, through musical circles. Brown is a classical singer and trombonist, and Cherry’s primary instrument is the guitar. For years, both men attended an annual invitation-only music festival in North Carolina called The Boogie. Their social circles have overlapped since, but the two men became more closely connected after Cherry and Gordon began building their home in Oakwood. 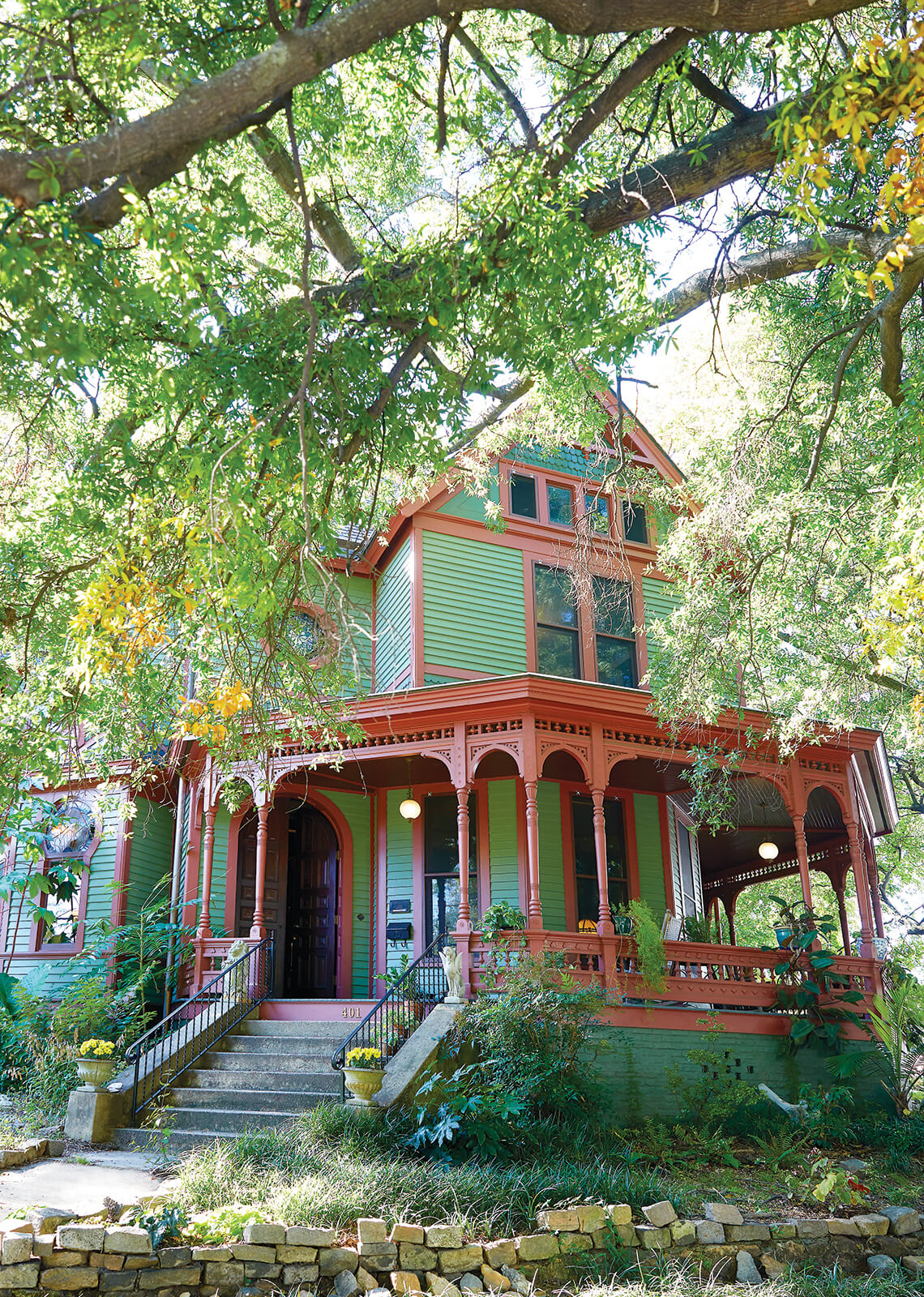 Matthew Brown’s restored Queen Anne-style home was one of six long-neglected historic houses on Person Street that were once owned by the State of North Carolina. photograph by Stacey Van Berkel

You might assume that a preservationist like Brown would have sided with the neighborhood’s not-in-my-historic-backyard brigade. But you’d be wrong. Sitting in Cherry’s airy living room, gazing out at the gently billowing bamboo stalks that shade a wood-and-concrete patio, Brown recalls what he told the Raleigh Historic Development Commission as the controversy played out: “Even though this house is mostly modernist, it has a lot of elements that tie into the historic architecture of Oakwood,” he says, referring to the house’s traditional shallow-pitched roof, its wood siding, and its black window sashes. “All of those things can be found on houses throughout Oakwood.”

“Matthew’s house is one of the finest examples of a fully realized vision of an architectural moment in history.”

What’s more, Oakwood’s historic houses, like Cherry’s contemporary home, were constructed by highly skilled craftsmen using fine materials, and the structures were meant to last forever. Brown looks around the space inside Cherry’s home. “This house is in keeping with that tradition of high-quality design and high-quality materials,” he says.

Cherry repays the compliment, noting how he was first struck by the exterior of Brown’s home and its majestic proportions. “It’s a gorgeous house,” Cherry says. “Because of my profession, when I look at architecture, it isn’t a matter of whether I like something or not. It’s more a matter of assessing how a design fits into the history of architecture and that particular architectural style, and how it’s been cared for, and whether it remains true to its original intention.” When he first stepped inside the Lamar-Brown-Arthur House, Cherry was bowled over by its restoration. “Matthew’s house is one of the finest examples of a fully realized vision of an architectural, design, and philosophical moment in history,” Cherry says. “It’s a profoundly exquisite place to be and to experience.” 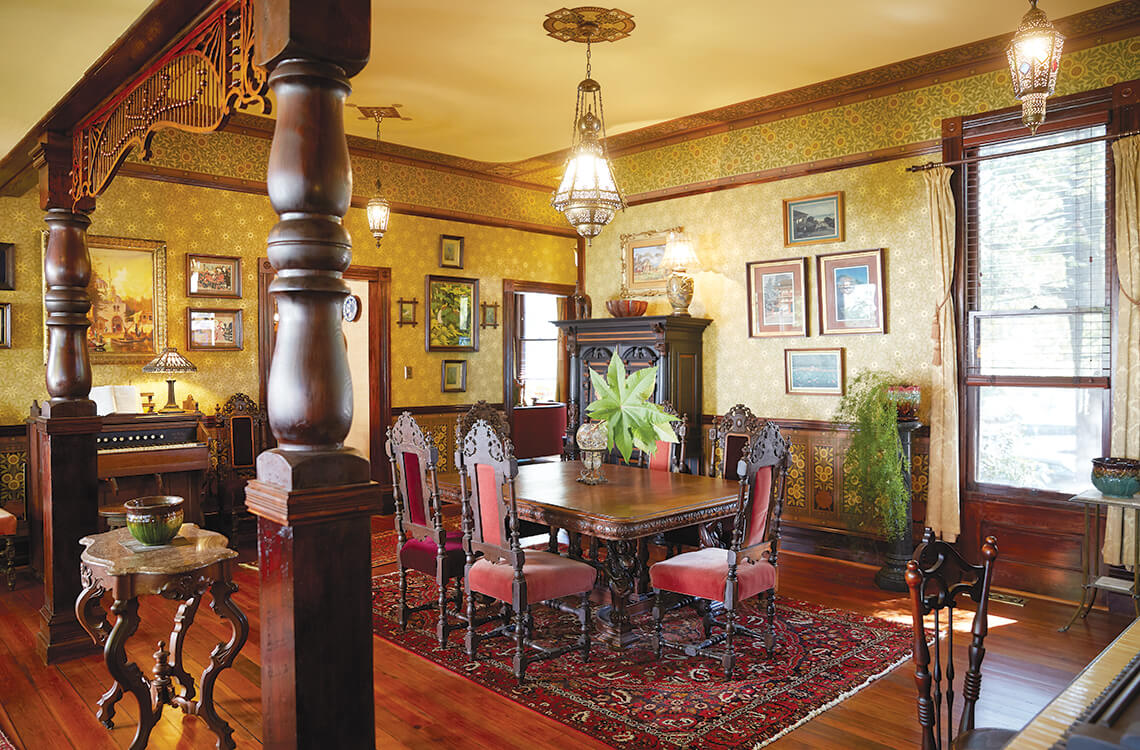 The wallpaper in the drawing room of Matthew Brown’s home is by Herter Brothers, the firm that designed the interiors of Vanderbilt mansions. photograph by Stacey Van Berkel

While the Cherry-Gordon house reflects Cherry’s personal sensibilities and professional expertise, the Lamar-Brown-Arthur House is the realization of Brown’s longstanding desire to transform a diamond in the rough into his own residential masterpiece. His Victorian house had changed hands several times, was divided into apartments, and then was sold to the State of North Carolina, which bought properties near the Capitol to convert into offices. In 2003, the State announced that it would sell the properties, but it was another 12 years before the homes were made available to buyers.

Brown bided his time, and, in 2015, he was finally able to make the winning bid on his house. The restoration and renovation of the two-story, 3,500-square-foot structure has been a labor of love — and a significant financial investment. No detail was too small. Layers of exterior paint were removed and replaced with the dark greens and reds found in Queen Anne palettes. Galvanized downspouts were replaced with copper. Molding-knives were created to replace the missing Eastlake interior woodwork. Not only has the Lamar- Brown-Arthur House become an architectural showpiece, but it’s also become part of the life of the community. Groups use the home for events and fund-raisers, and it has been a highlight of the annual Historic Oakwood Candlelight Tour.

As Brown and Cherry’s friendship deepened, the two discovered a shared childhood experience of realizing the power of architecture and design to capture the imagination. Both men’s fathers designed modernist homes. “My dad designed a modern ranch house, and we had Danish furniture, the Bertoia and Saarinen chairs, all of that,” Brown says. “So I grew up liking that. And then, somewhere around 1970, my father decided he liked antiques, and we gradually got rid of all the modernist stuff and got antiques.” 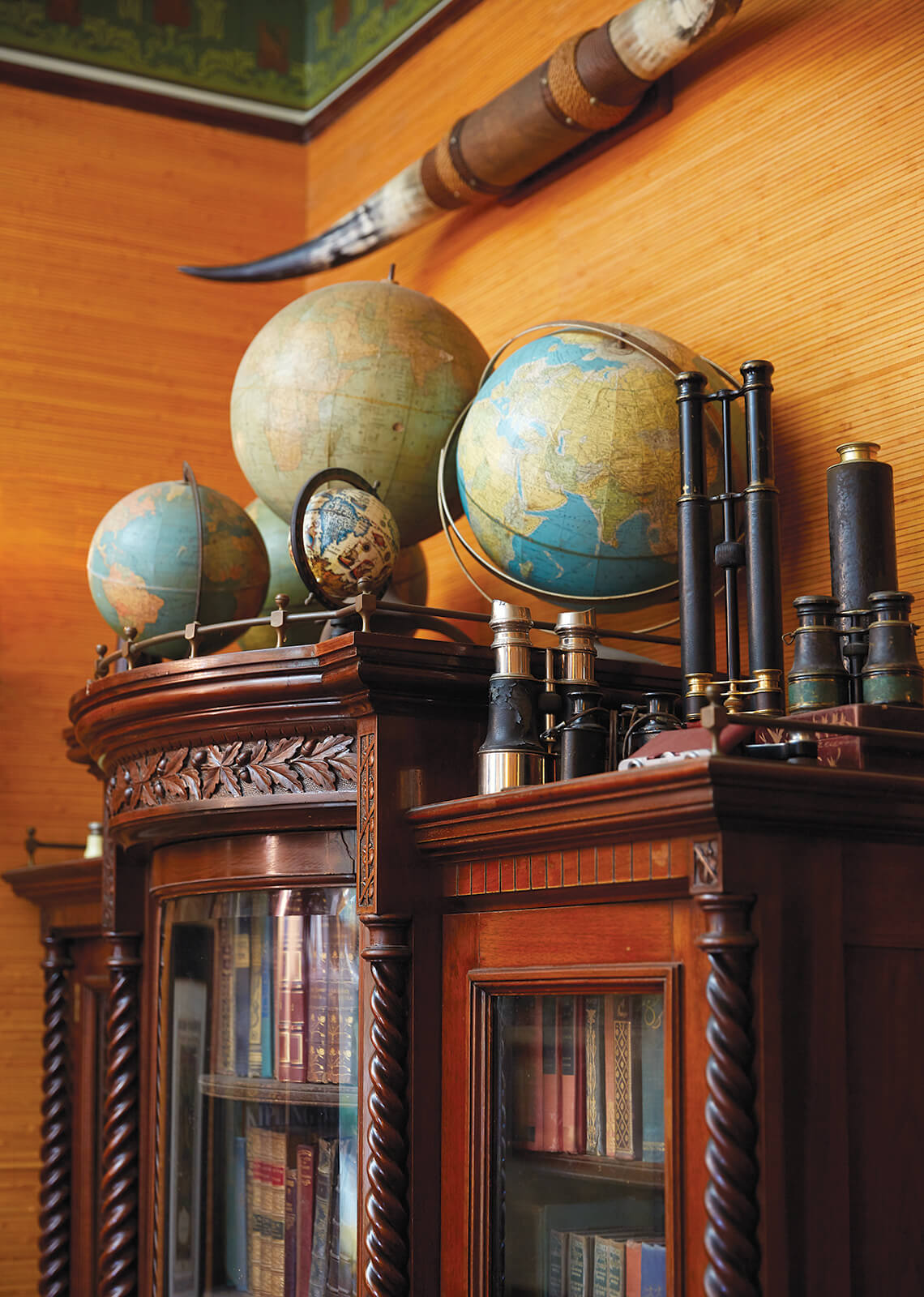 Among the Lamar-Brown-Arthur House’s painstaking details are an Aesthetic Movement bookcase from 1880. photograph by Stacey Van Berkel

Inspired by Frank Lloyd Wright, Cherry’s father created a modern house that garnered curiosity among the family’s neighbors. “This was in Grifton, North Carolina, which is a teeny-tiny little rural town,” Cherry says. “But people were reading magazines and watching television and were aware of the idea of better living through design. So I think people were probably proud that their town had some of these modern designs.”

It wasn’t until Cherry enrolled in North Carolina State University’s College of Design that he got a more formal awakening to the building blocks of modernist design — and how those blocks could be reconfigured. “I was attracted to Bauhaus, the idea of functionalism and beauty, and to Shaker design, which is a perfect balance of form and function,” Cherry says. “I started to understand how flexible modernism is to create space and light and views. It allows a lot of room for creative development of a design.”

That marriage of function and beauty resonates with Brown, too, although he is drawn to the Victorian era’s embrace of eclectic ornamentation, opulent furnishings, distinct demarcation of rooms, and cozy warmth rather than bright expanses. “You don’t just have a chair,” he says. “You have a chair that has carvings of animals or flowers or geometric patterns. And instead of just putting a piece of art on the walls, you have wallpaper by William Morris or the Herter brothers, and the whole wall is art.”

As the afternoon light arcs across the living room of the Cherry-Gordon house, the two friends continue to articulate more common ground than differences. A shared appreciation for Tibetan Buddhist paintings known as thangkas. The way a window serves to frame passing clouds or swaying trees. How a doorway outlines a view to the next room, creating an inviting complement of patterns and textures. The frisson of excitement when discovering the perfect lamp or chair or piece of art that stirs and expands one’s aesthetic experience. 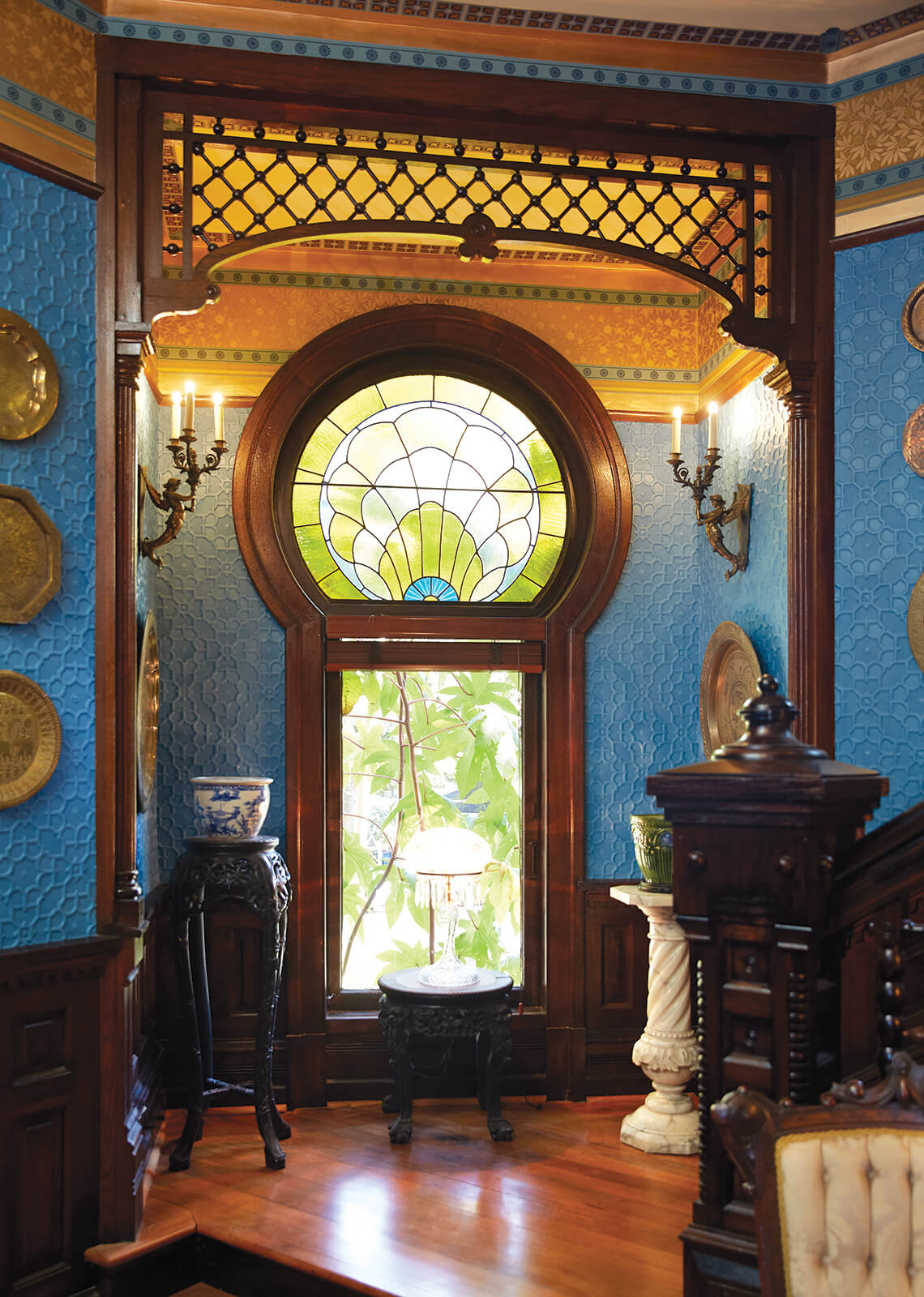 “I think that people are either born with an innate sense of aesthetic appreciation or not,” Brown says. “My house reflects my own personal aesthetic outlook and my preference for Queen Anne architecture and Victorian styles. But every time I come over to Louis’s house, I just stop and say, ‘That’s beautiful. The shapes and forms, the beautiful siding, the plants in the yard.’ It’s not logical. It’s a feeling and a sensibility.”

Cherry nods. “I’m so much more interested in quality than a style,” he says. “I could care less about any style. It’s either beautifully done or it’s not. And that, to me, has nothing to do with style. The well-done things are always going to look good.”

And with that, the historic preservationist bids goodbye, for now, to the modernist architect. Brown hops on his bike and begins pedaling away from one of Oakwood’s most visible and well-known examples of architectural and aesthetic excellence — and back toward another one.