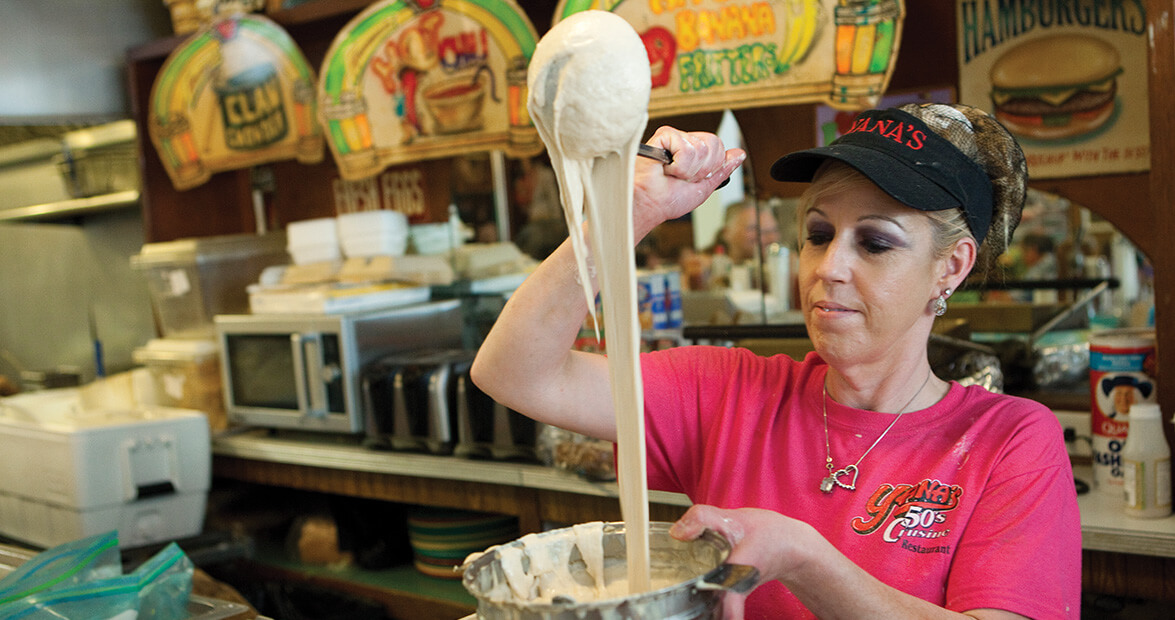 The batter streams from ladle to griddle and rises into light, round pancakes. It clings to fat rings of onion and blossoms into a golden brown crust when dropped into the fryer. It coats fruit — fresh bananas; apples; strawberries; and peaches, when they’re in season — to yield the fritters that have made Yana’s Ye Olde Drug Store Restaurant famous.

At Yana’s, the recipe for this batter is a well-kept secret. Try to get it out of owner Evelyn Moore and she won’t tell. It has a copyright, she says. Ask manager John John Sloan, Moore’s grandson, and he’ll say he doesn’t want to get fired. Sit at one of the swivel stools at the original soda-fountain counter and try to tease it out of Moore’s staff, and they’ll just smile.

Moore got the recipe from her mother, Yana, who got it from her ancestors, descendants of an American Indian tribe named Yana. Moore, whom customers call YanaMama, uses the made-from-scratch batter in several of her most popular dishes, ones that have kept customers coming back to the seaside town of Swansboro for 30 years.

Moore leased the old Bell’s Drugstore downtown and opened the restaurant in 1983. She wanted to give folks a place where they could have breakfast for lunch, or get a thick cheeseburger for breakfast.

She filled the dark, wood-paneled walls of the dining room with 1950s memorabilia, a passion Moore’s had since going to rock ’n’ roll shows at the Charlotte Coliseum as a teen. She carried the ’50s theme through the menu, mixing family recipes for pancakes, fritters, and coconut pie with classic diner fare.

It wasn’t long before people started lining up outside the door, where a statue of handsome, hip-shaking Elvis stands. Now, the summer months are busiest, especially on the weekends. North Carolina Highway 24 brings vacationers to the historic fishing village from Emerald Isle, Hammocks Beach, and points beyond. They turn off the highway onto Front Street, just west of the White Oak River.

Not all of Moore’s customers come from far away. Maxine Russell, who owns Russell’s Olde Tyme Shoppe across the street, is a big fan of Yana’s. Russell uses a wheelchair, so Sloan brings her breakfast, lunch, and occasionally, a banana split.

“Oh, we have wonderful banana splits,” Moore says. “They are big enough for two.”

“Two?” Russell says. “Is that what it’s for? Oh, now you tell me I was supposed to share.”

Yana’s officially opens at 7 a.m., but on one busy day in the summer season, several tables of regulars had already finished their morning meal by then. Terry Atwood, the lead cook and a 20-year veteran, has been here since 3:30 a.m. making gravy, chowder, chili, grits, and other staples for the morning rush.

From the dining room, customers can see past the counter, where orders handwritten on tickets are clipped to a wheel, to where Atwood and two other cooks work shoulder to shoulder. The cooks, three servers, and three backroom workers engage in a fast-paced dance of cooking, serving, and cleaning until the restaurant closes at 3 p.m.

They are like family, longtime server Greg Hardison says, and Moore is like their mother. She still works every day, managing the books, scheduling the staff, ordering supplies, and making sure the guests are happy and the food is prepared correctly, especially the pancake batter.

Moore’s secret-recipe batter is combined with fresh-cut fruit to make fritters, the menu item that draws many Yana’s customers. Growing up in Union County near Charlotte, Moore’s mother made the fritters in a cast iron skillet. They use a deep fryer at Yana’s, but everything else is the same. People eat them as appetizers; they have them for dessert; sometimes that’s all they get.

Cook Penny Thompson will make 70 orders of fritters on a slow day. She pulls 10 large peach slices out of the batter and places them in clear, hot canola oil. The batter rises and the fruit floats to the top. She turns them so they’ll brown evenly.

After a few minutes, she pulls out the batch with a few scoops of a strainer and lets the oil drain. She pops open a brown paper bag and pours in two scoops of powdered sugar, followed by the fritters and some stray clumps of dough.

Thompson gives the bag a good shake, empties it onto a platter, and adds several good dashes of a cinnamon mixture from a shaker.

“Order of fritters up,” she shouts, and goes back to peeling fruit.

The confections are piled high at a table in a corner decorated with famous images of Marilyn Monroe. Linda Thomas of Vanceboro is eating with friends from the Farm Life High School class of 1960. They’ve been coming for years, Thomas says, but today they have a purpose: to bring home fritters to cheer up an ailing friend.

Betty Brown, who lives on Emerald Isle, has four sons spread across the country, but they visit often. Her 8-year-old granddaughter, Lilly, can’t go home to Indiana until she’s been to Yana’s.

Lilly always orders the fritters first. Apple is her favorite. “She eats almost a whole plate,” Brown says. “We order pancakes and bacon, too, but she takes all that home.” There’s a picture of Lilly at Yana’s from each year she has visited — eight pictures in all.