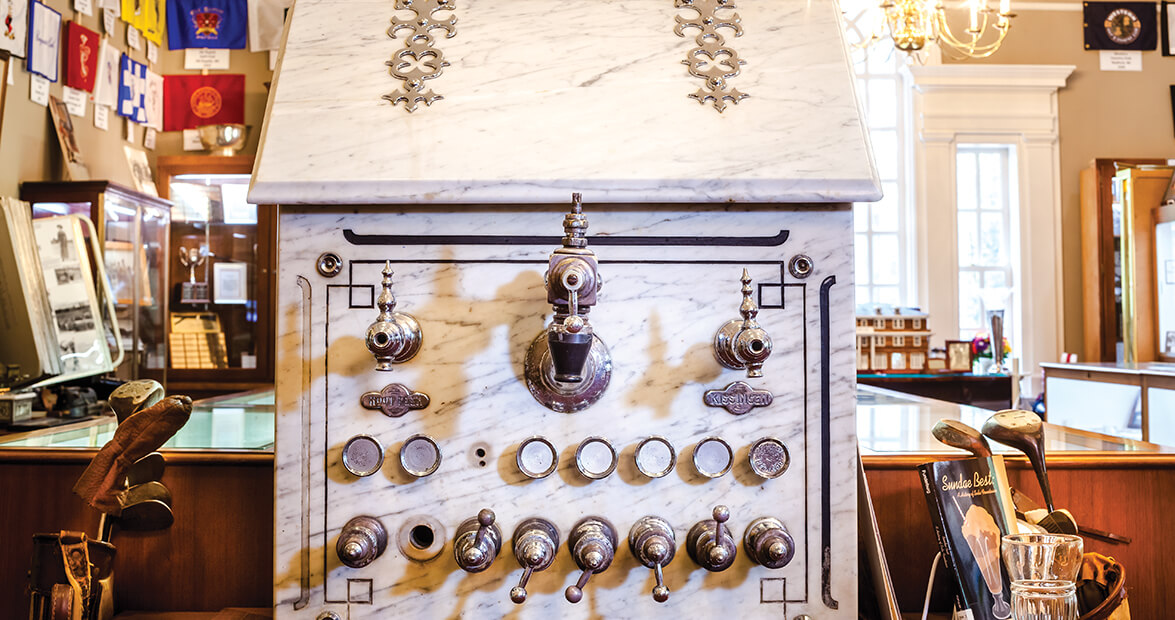 The Tufts Archives wing of the Given Memorial Library in Pinehurst has all the trappings of your typical library. There’s the fiction section, of course. There’s a room devoted to the history of Pinehurst. There’s golf — so much golf.

And then, still in the Tufts Archives wing, right next to the first diary of eventual town founder James Walker Tufts (“I was taken with the Disentery and mother thought she could cure me with the Mrs. Kidders Cordial,” young James wrote), is the soda fountain.

Not a soda fountain in the colloquial sense, the way we think of a soda fountain as a place where kids went to sip milkshakes after school. This is the actual fountain itself, dispenser of drinks, keeper of flavors.

The behemoth weighs 300 pounds and hasn’t been moved since it was brought to Pinehurst in 1987. Inoperative now, there’s nevertheless plenty of tangible evidence of its former life. Eight silver-plated knobs, used to dispense flavored syrup, protrude from the front. Seven are blank, with no indication of the flavors they once bestowed on customers for three cents per pull.

The far right one, however, is marked “Don’t Care.” It’s obvious that the well-worn knob has been pulled significantly more often than any other knob, and for good reason.

The soda fountain business was good, you see. The particular fountain that now resides in Pinehurst is a model known as The Cottage, and it spent most of its former life at Bailey’s Ice Cream parlor in Wellesley, Massachusetts. In 1987, when Bailey’s no longer needed the fountain, it was sent to Pinehurst.

Which raises the obvious question: What does a village known mostly for golf have to do with a 300-pound soda fountain? Most visitors probably never see the fountain. The library is near the main entrance to town, but many visitors are in a hurry to get to the circa-1895 Holly Inn across the street, or to the bustling downtown.

But the fountain is an even more essential part of Pinehurst than a 5-iron or the iconic Putter Boy logo.

The aforementioned James Walker Tufts, originally a pharmacist, founded the American Soda Fountain Company. His fortune grew as America fell in love with his invention — and the product flowing from its spigots. Tufts originally meant Pinehurst to be a haven for those afflicted with tuberculosis; it soon became apparent that a destination built as a retreat for those with a very contagious disease was probably ill conceived.

Tufts never meant to found the state’s signature golfing paradise. Instead, Pinehurst was born of nuisance. In 1897, Tufts’s dairy manager reported that guests were smacking a tiny white ball around the pasture and disturbing milk production. Ever the entrepreneur, Tufts recognized opportunity when he saw it, and built a nine-hole golf course.

Today, the village features more than 40 golf courses and hosts approximately one million visitors annually, plus the eyes of the world for events like the U.S. Open, as it did in 2014. Those guests are there, almost always, for golf.

But even though they don’t realize it, the shoppers and golfers and visitors are there because of squatty little soda fountains like the one that sits tucked away in a back room on Cherokee Road. “The soda fountain,” wrote the Southern Pines Pilot when the fountain came home in 1987, “is the egg that laid Pinehurst.”