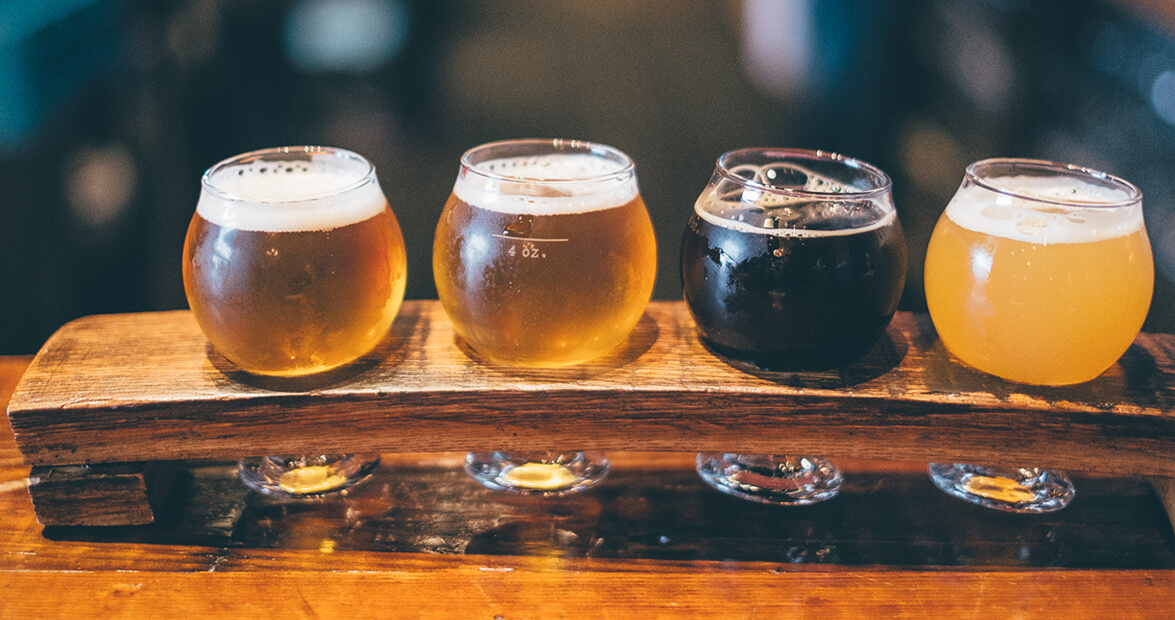 September is here, and with it comes everyone’s favorite confusingly-named fall celebration: Oktoberfest. The holiday originates in the Bavaria region of eastern Germany — first held in 1810 to celebrate the wedding of Crown Prince Ludwig to Princess Therese, the festival has been held almost every year since in Munich’s Theresienwiese fairgrounds.

Associated with beer tents, brass bands, and bratwursts, the celebration is world-renowned. In 2016, the festival had 7.2 million visitors drinking 6.9 million liters of beer. In North Carolina, several cities (including Asheville, Hickory, and Cary) hold their own smaller versions of the festival, sometimes spanning multiple city blocks.

Many breweries brew a version of a traditional Bavarian Oktoberfest lager; check with your local brewery, which probably has its own. The style is commonly known as Märzen or Märzenbier because the brewing process traditionally began in March, towards the end of the period of the year that German breweries were allowed to brew beer under traditional laws. The style – medium-high in alcohol, malt-forward with a mild hop backing, and ranging from a medium to dark copper color – originated because of the need to brew lagers at a higher gravity so they’d keep during the warm summer months. With modern refrigeration this is no longer a necessity, but the style continues to thrive due to its association with the beloved annual celebration.

The influence of German beer culture in North Carolina runs much deeper than Oktoberfest, though. If you want to experience North Carolina’s German heritage for yourself, but you’re not looking to put on lederhosen or a dirndl – or you hate polka music – you still have several options.

Weeping Radish serves many styles of traditional German beer; their Black Radish is listed as a standard for Schwarzbier, a style of lager made with roasted malt. Opaque black in color with hints of coffee and chocolate, the beer drinks similarly to a stout but with the light, clean mouthfeel of a lager. The brewery’s Corolla Gold is a Helles, a type of lager associated with Munich. Malty, sweet, and with little hoppiness, this refreshing beer was one of the originals that Weeping Radish opened with back in 1986.

The brewery also serves traditional Bavarian food. When you visit, make sure to get the schnitzel with a side of sauerkraut and applesauce.

Red Oak Brewery • Greensboro
Traditionally, German beer has been crafted in accordance with the Reinheitsgebot, a 1516 purity law that limits how beer can be brewed. Specifically, the ingredients of “RHG” beers were limited to barley, hops, and water (and under modern law, other grains such as wheat, as well as yeast, are also allowed). This limitation is at odds with American craft beers, which often contain spices, fruit, or other added ingredients.

However, Red Oak Brewery – founded as a brewpub in Greensboro and now headquartered in Whitsett – is one of a handful of American breweries that can boast about adhering to Reinheitsgebot. All of the brewery’s beers – including their flagship amber lager and Hummin’ Bird helles – are unfiltered, unpasteurized, and contain only the above ingredients.

Capable of producing 60,000 barrels of beer annually, Red Oak is not only one of the largest breweries in North Carolina, it is the largest lager-only brewery in the United States.

Olde Mecklenburg Brewery • Charlotte
German beer culture is often associated with large and raucous celebrations in festhalles and biergartens, and Charlotte’s Olde Mecklenburg brewery is the state’s best place to find just that. Spanning eight beautiful acres, the brewery is a truly a social hub.

Another brewery that prides itself on adhering to Reinheitsgebot, Olde Meck brews several traditional styles: altbier, pilsner, and weissbier. It also offers seasonally-available dunkel and Christmas bock, and a Baltic porter that (while not German in origin) is huge and delicious. Olde Meck’s traditional weissbier is a stand-out; brewed with fruity and citrusy Mandarina Bavaria hops, the beer is incredibly well-balanced between crisp, hazy, and wheat-forward.

The brewery’s annual Mecktoberfest will be held September 22-24. Throughout the weekend, the brewery will feature traditional German music, bavarian delicacies like Spätzle, Knockwurst, and the ever-present Schnitzel, and – of course – the brewery’s Märzen, the eponymous Mecktoberfest itself.

Mother Earth • Kinston
Kinston’s Mother Earth certainly doesn’t limit itself to traditional German methods or styles, but the brewery – founded in 2008 by now father and son-in-law pair Trent Mooring and Stephen Hill – still produces some of the state’s best examples of several types of German beer.

One of the brewery’s most beloved offerings is Endless River, a tangy kölsch that’s light in both appearance and body. Perfectly showcasing the slight fruitiness and delicate head associated with the style, the beer is easy to find throughout the state.

Dark Cloud is a dunkel available year-round. Dunkel, meaning “dark,” is a visually misleading style of beer originating in Munich. The beer pours a rich, dark brown, but close your eyes and you’d never guess. Smooth, mild with a lingering maltiness, and dangerously sessionable, the beer is one of the brewery’s two lagers. The other, the Park Day pilsner, is just as easy-drinking with a floral nose that opens up to a smooth, balanced finish. The beer, brewed entirely with German malt and hops, is an exponential upgrade to the American-style pilsners you might have after mowing your lawn.

The brewery also offers a Berlinerweisse, an unusual style of beer allowed to naturally sour in the kettle. The brewery ramps up the acidity with a the addition of Mosaic and Citra hops, two American varieties that – while totally unorthodox for the style – underpin the naturally-occurring lemon notes.

Sierra Nevada • Mills River
Sierra Nevada is another brewery you might not associate with German beer. The California-based brewery – which opened its North Carolina location in Mills River in 2014 – is best known for its hop-forward West Coast-style IPAs and pale ales. However, each year the brewery partners with a German-based brauhaus to brew a collaborative take on the Märzen style.

This year, they’ve worked with Brauhaus Miltenberger to put together their festbier. The beer is the result of over 388 years of brewing experience – 350 of which is Brauhaus Miltenberger’s! It’s brewed with entirely traditional ingredients: two-row, Steffi, pilsner, and Munich malts, and Tettnanger, Spalter, and Magnum hops. Try some at the brewery’s annual Oktoberfest celebration, held this year on September 30.

Beyond Oktoberfest, Sierra Nevada also brews Kellerweis, a hefeweizen brewed with traditional methods. A cloudy wheat ale brewed in open fermentation tanks, Kellerweis is an exceptional example of the clove and banana notes associated with the style.