When the Barbie Dreamhouse from Santa proved too small for Barbie’s growing family, my sister and I improvised, creating a sprawling, eight-room ranch house with grocery store boxes that we “wallpapered” with wrapping paper and carpeted with rug scraps. Thirty years later, my daughter’s dollhouse was called Polly Pocket, and it fit in her palm.

The point being that dollhouses come in every shape and size, including a human-size one in Kernersville with 6,000 square feet, seven levels, 22 rooms, and 15 fireplaces. This is no plantation, or mansion, or estate, or manor. It’s a folly, Körner’s Folly. Says so right there in the many penny tiles on the porch that took a craftsman five years to lay by hand. In 1878, when Julius Gilmer “Jule” Körner began building his bachelor home, “folly” was a trendy word for perceived idiocy, like Seward’s Folly, as the purchase of Alaska was sometimes called. Jule likely knew better — that in architecture, a folly is a building constructed primarily for decoration. So he was proud, rather than insulted, when a cousin dubbed his house “Körner’s Folly.” 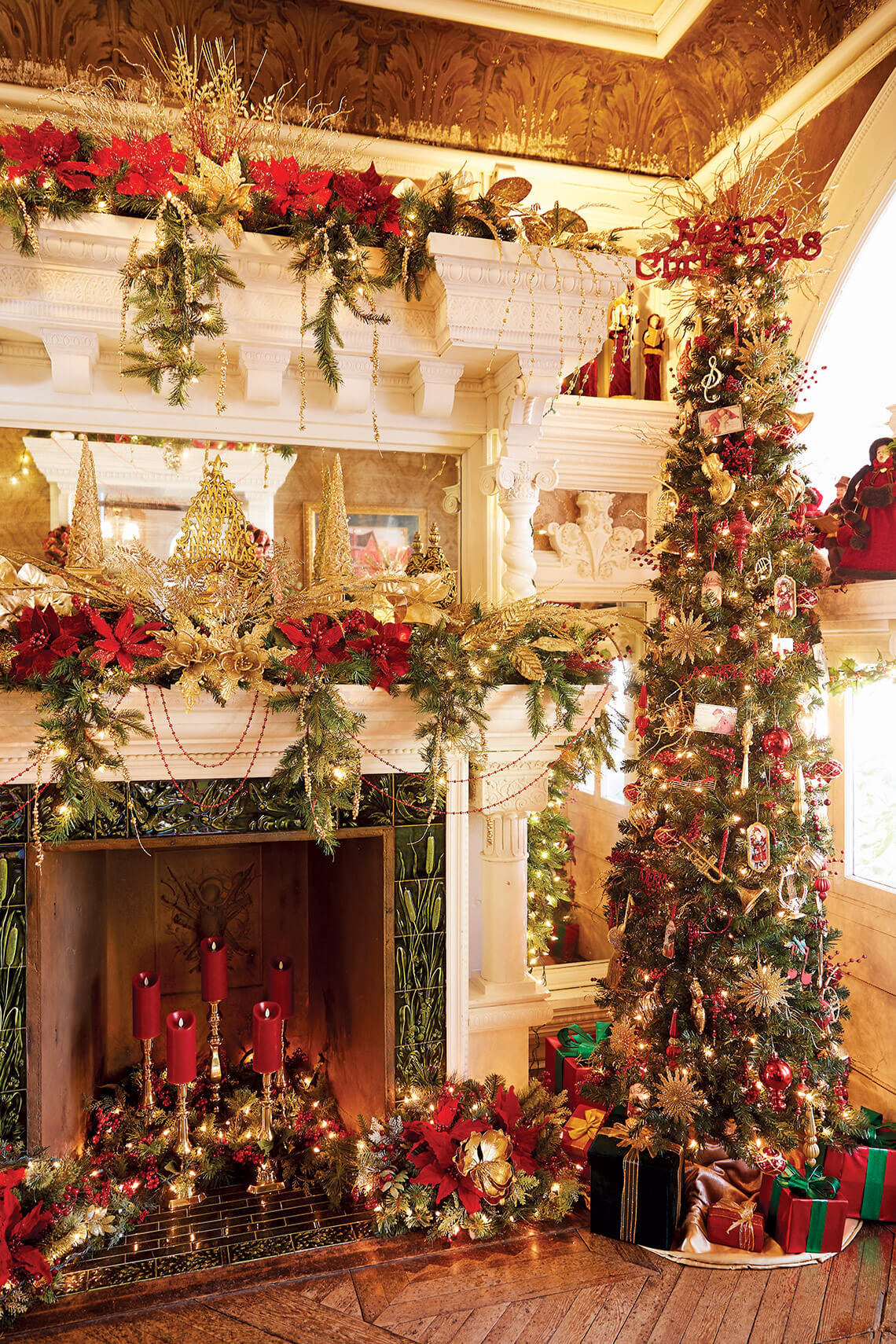 Körner built his house as a living catalog, filled with designs for his home furnishings company. No two windows, doorways, or fireplaces — there are 15 — are exactly alike. photograph by Stacey Van Berkel

Jule’s grandfather Joseph Kerner, from Germany’s Black Forest region, had arrived in America in 1785; he settled what would become Kernersville a few years later. Jule was born in 1851, studied art and design at schools in Indiana and Philadelphia, and, once his home was finished in 1880, opened his Reuben Rink Decorating and House Furnishing Company. His big break came via Bull Durham tobacco from W.T. Blackwell and Company in Durham, for whom he was hired to paint the life-size, snorting bull logo on barns, buildings, and boulders all over the South, and eventually the U.S. Bull Durham became a household name, and Jule ran with it, signing each logo “Reuben Rink.” Körner’s Folly became a catalog house, a living advertisement for his decorating and furniture business. Or, as Operations & Programs Manager Suzanna Ritz puts it now, “the Victorian IKEA.”

And what an ad it was. The man never met a mantelpiece he didn’t think could be fancier. “I’ll take that, that, and that one,” you can imagine a customer listing while perusing the acanthus leaves; beading; egg-and-dart molding; floral and mythological motifs; half corbels; and Doric, Ionic, and Corinthian classical columns mishmashed and stacked from the mantel to the 15-foot ceilings of the entrance hall. (Never mind that Jule was only 5 foot 6 — once you clear the very low entrance, a life-size, paper-dollish cutout of Jule stands ready to greet you.)

Not a fan of the dining room’s heavy, huge, dark, Victorian-style buffet and china cabinet, designed by Jule and likely made down the road in High Point? Pass right on through to the breakfast room, featuring what’s believed to be the state’s first skylight in a private home, and no doubt once filled with the houseplants that Victorians craved.

Squeeze through what Ritz playfully calls “the diet door” — turn sideways for best results — and head for the smoking room, done up in unexpected peaches and yellows, with tile to the windows and an outdoor pump 10 feet away lest a cigar ember go disastrously astray. Here, as in every room in Körner’s Folly, it’s advisable to look up. Ceilings are adorned with elaborate medallions and murals. Not everyone’s wife was like Polly Alice Körner, willing to have customers wander the first-floor master bedroom. But how else to test the velvet “throne” chairs that Jule designed? Or the pivoting window in the dressing room that allowed Polly Alice to look into the playrooms — one each, naturally, for daughter Doré and son Gilmer — whose ceilings barely scrape five feet because, well, children are short.

Nooks and niches, secret doorways and hidden passageways abound. The Kissing Closet is shallow enough only for standing — seated necking not permitted — in the otherwise grand, ballroom-size reception room, decked out in the original mirrored walls and painted and plastered in golds and ivories, like gilded meringue. Here’s the room that more than any other underscores Jule’s clear attitude that less is not more; less is a bore. 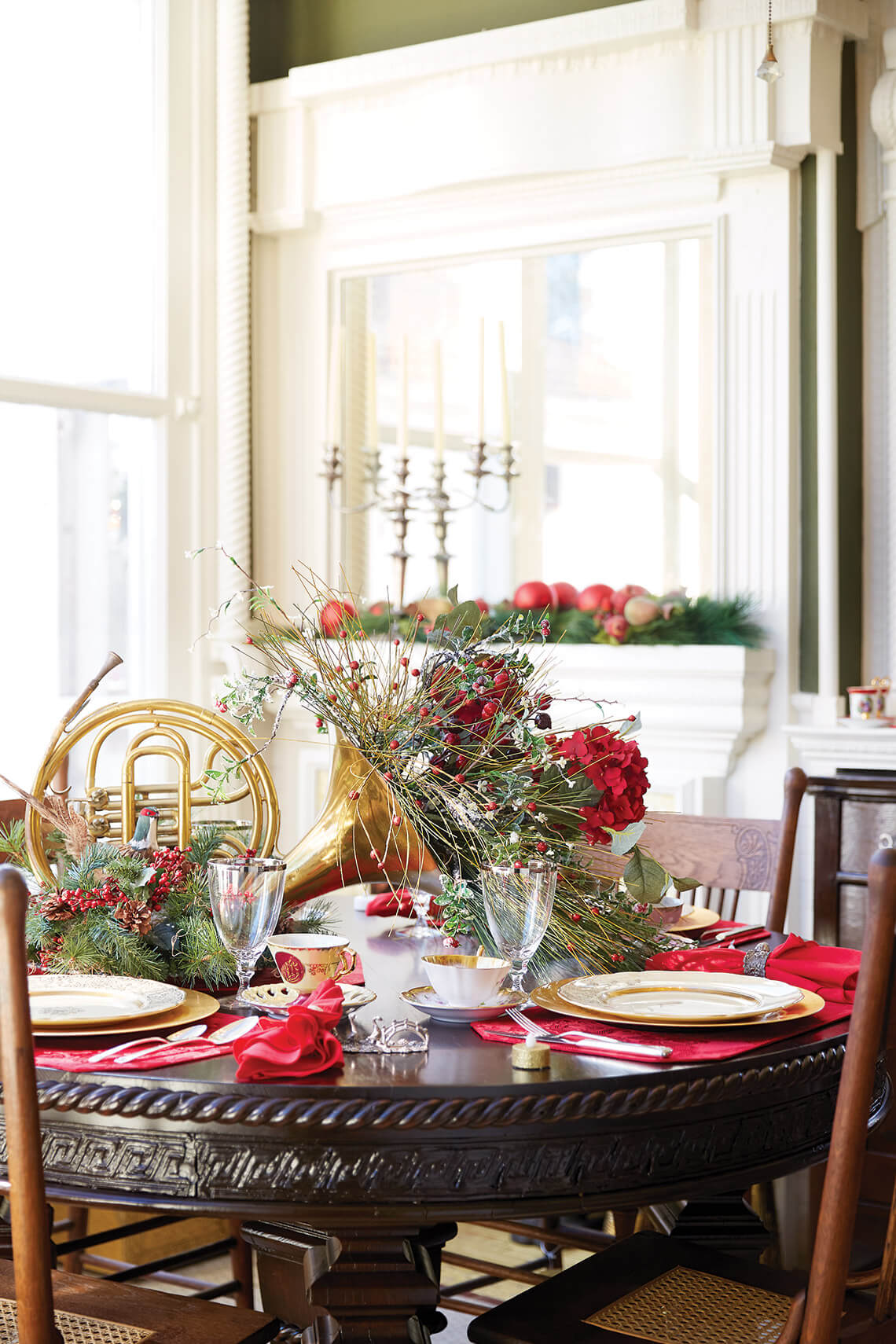 In the Breakfast Room, Körner added some of the first skylights in the state. photograph by Stacey Van Berkel

The room is also home to what Körner’s Folly experts used to call “the weird thing”: a low, upholstered wooden cart that Jule designed. Movable coffee table? Practice stage for charades or plays? Posing table for portraits? Finally, they figured out that it was a station for tailoring clothes — people would stand on the elevated platform to make sure their clothes were fitted correctly.

Overserved or introverted guests could sneak through an unobtrusive door to the “long room” for a break. Just around the corner, a hidden staircase — dubbed “the scary stairs” due to their steep, ladder-like risers — offers another escape.

Rightly so in this playhouse, Doré’s room — decorated in that dusty rose color so favored in the era — is home to Medora, Doré’s namesake doll, who leaves the Folly every few months to get her hair done and her wardrobe updated by Doré’s granddaughter. The dressing room is situated directly above the kitchen, vented to allow its occupant to enjoy the stove’s heat (and to guess what was cooking for dinner).

Remember as you go that Jule was perpetually tinkering, updating, renovating, converting. Which explains the arched windows in the library, where horses stuck their heads through in the room’s former life as a stable. Nothing, however, prepares you for the theater on the uppermost floor — the literal crown jewel of the Folly. The steep pitch of the gabled roof houses a stage, an orchestra pit, and enough room for an audience of 80. The Körner family were all musical, and Polly Alice loved dramatic presentations, inviting the Kernersville citizenry. There’s even a green room just behind the half-moon stage, where one awaited cues. Possibly the only architectural feature that Jule didn’t include in the Folly was a turret, but by golly, he got his proscenium. From the theater’s window, you can see what was surely the most elaborate outhouse in the land: the Privy, a four-seat, electrified mini-Folly. 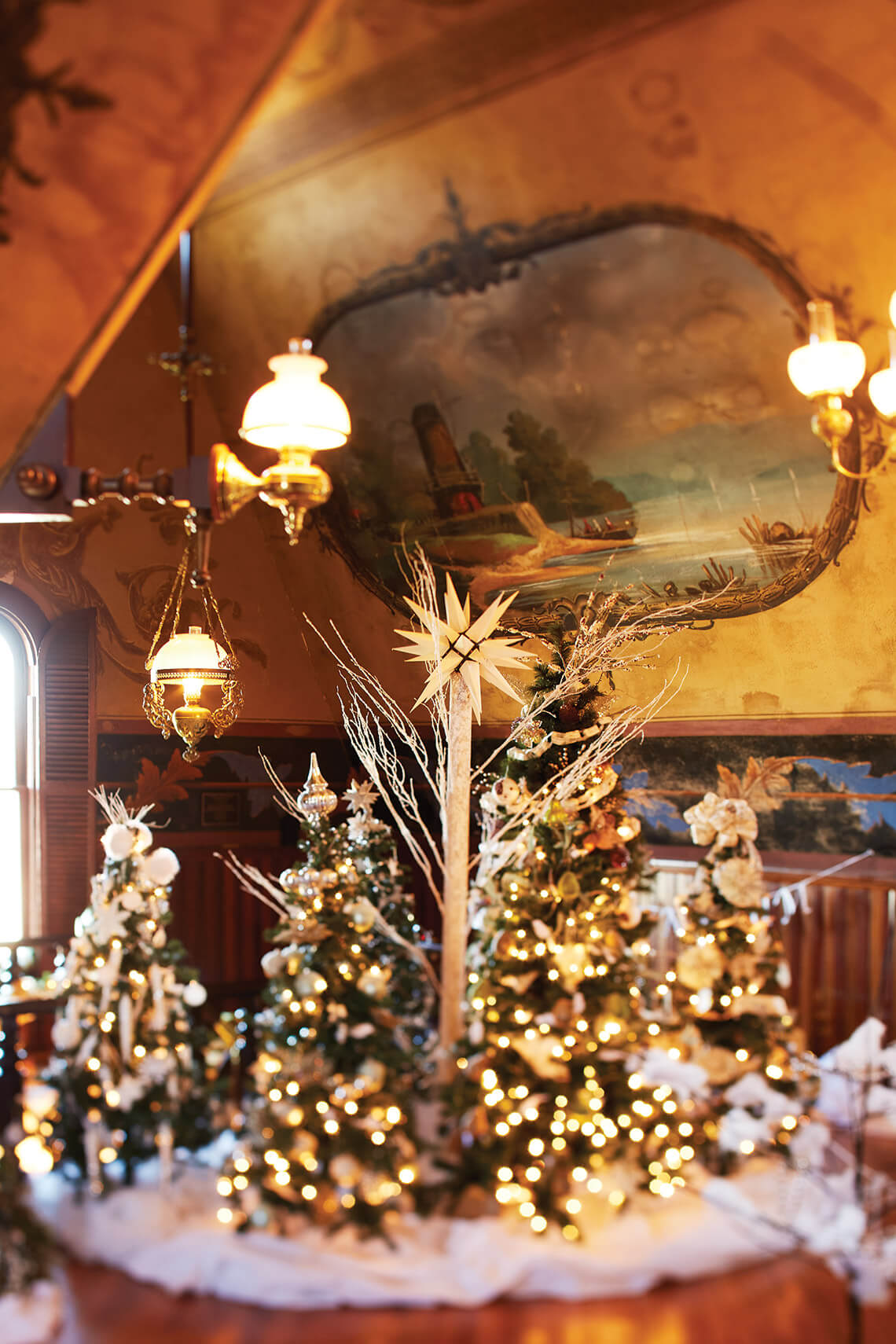 Körner created the top-floor Cupid’s Park Theatre — so named because of its cherubic murals — for his wife, Polly Alice, and her drama program for children, known as the Juvenile Lyceum. photograph by Stacey Van Berkel

Wallpaper that mimics elephant hide. Lion faces on lintels. Water sprites on hearth tiles. A sense of playful experimentation is reflected in every room of this grownup dollhouse, showpiece, sandbox, lab. For those of us who don’t know the difference between a pillar and a pilaster, how best to describe Körner’s Folly? “We don’t have the vocabulary for all of it,” Ritz admits. “It’s a perfect confluence of Gothic, German, Victorian, and the American yen for the next new thing.”

Like his home, Jule Körner himself defies pigeonholing. Engineer, artist, designer, advertiser. Salesman, eccentric, perfectionist. Why do a little when you can overdo? Which means that no one should be surprised to learn that Jule bought a farm full of cedar trees to make certain that each of his cedar shingles was identical. Or that he reverted the Americanized spelling of his last name from Kerner to the German Körner. That two-dot umlaut fancies up a plain old O all day long.