You probably missed the Winter Olympics of 1977. Most did. It was an off-year competition, more exclusive than elite. In the host city of Winston- Salem — in the Sherwood Forest community, to be precise — about 13 neighborhood kids competed for something greater than Olympic gold: neighborhood glory. These 10- and 11-year-olds faced off in the targeted snowball throw; they made sledding a contact sport. If you were there, you would’ve noticed a rising star, a kid named Hans deBot, who had the ingenuity to grease his sled’s runners with candle wax prior to competition.

That bit of savvy would prove prophetic.

“I love the Olympics, and I love the United States, so I jumped at the chance,” deBot says.

There was just one problem: Apart from the ol’ candlewax-on-the-runners trick, deBot had never made a sled before.

DeBot is no stranger to making fast things go faster. DeBotech, Inc., the Mooresville-based company he runs with his wife, Jamye, develops carbon fiber and advanced composite components that add oomph to vehicles for NASCAR, Corvette, and Daytona SuperBike — brands that boast plenty of oomph to begin with. When he accepted the bobsled challenge, deBot took on a new, if familiar, mission: to design a vehicle for ultimate speed. This time, however, it’d be a vehicle without wheels, speeding down a track covered in ice.

DeBot designed and built his first bobsled body — a head-turner attached to a chassis made by Mike Chapman and Chapman Racing Heads — in time for Rosselli to take it on a test run down the track at the 2002 Winter Games in Salt Lake City. The sled caught the attention of Geoff Bodine, a former NASCAR driver who began creating four-man bobsleds for U.S. Olympic teams in 1994 through his company, Bo-Dyn.

“Mutual friends linked us with Geoff’s group, and they said, ‘Holy smokes, look what this kid built down in Mooresville, North Carolina,’” deBot says. “That’s how we all became a team.” 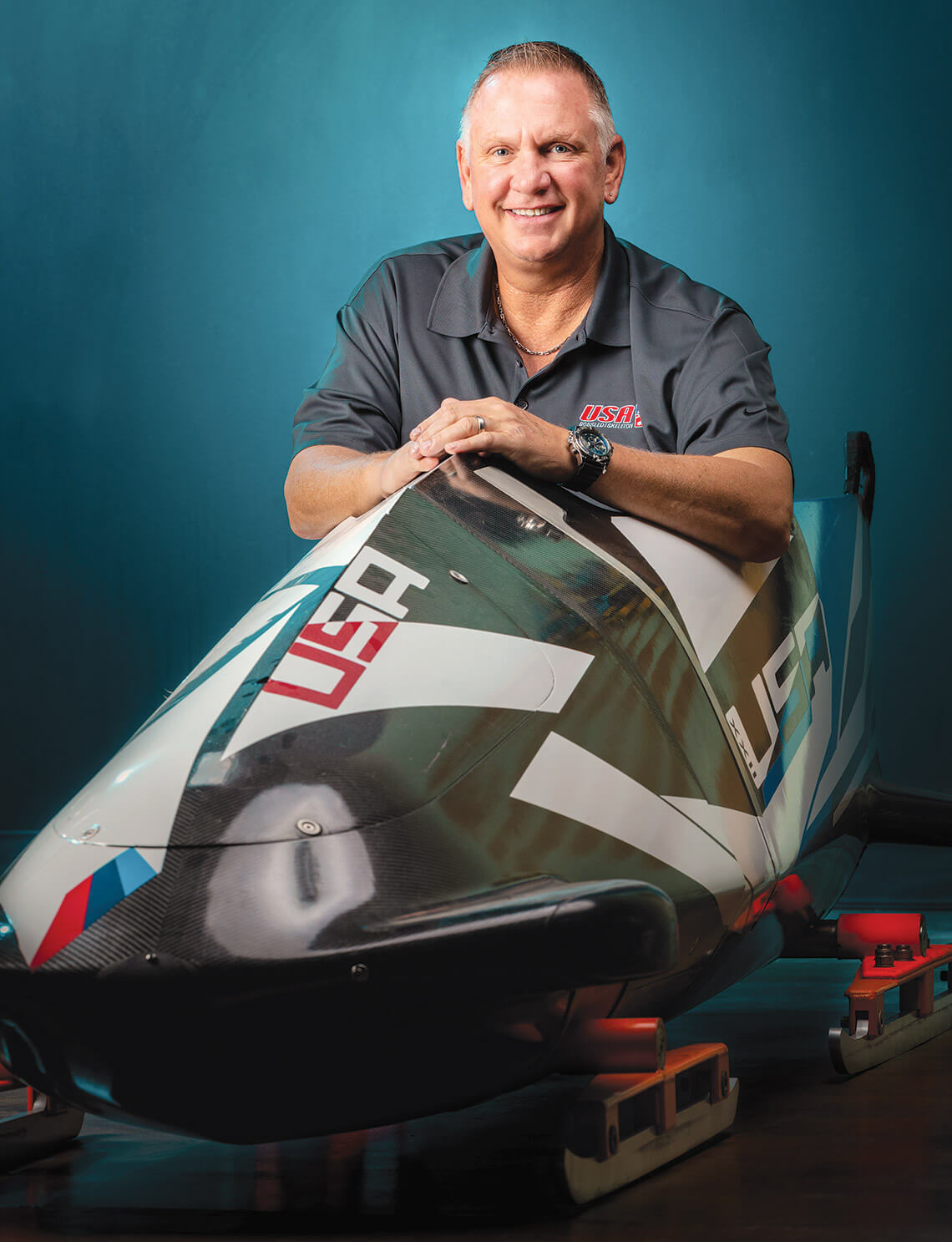 The sleds that deBot plays with now are a far cry from the Flexible Flyer he rode to victory down the hills of Winston-Salem as a kid. photograph by Jerry Wolford & Scott Muthersbaugh

Motorsports and sliding sports already shared common ground — McLaren works with Britain’s bobsled team, Ferrari with Italy’s. Wheels or blades, asphalt or ice, aerodynamics are aerodynamics, and speed is speed. In the U.S., this relationship began with NASCAR’s Bodine, then expanded with BMW of North America’s two-man bobsled in the 2014 Olympics. DeBotech products went into all of them. DeBot’s components also went into Olympic skeletons, the terrifyingly small and fast sleds that athletes ride headfirst down a frozen track. American motorsports raced into sliding sports.

“We all come from different backgrounds, and in the sidebar of what we do in our day-to-day lives, we’ve all got this bug for USA bobsled and skeleton,” deBot says. “We’re just trying to help our American athletes win medals.”

Now, many of Team USA’s sleds speeding down the tracks at Olympic events — four-man, two-man, and skeleton — begin their journeys in Mooresville.

Watching the bobsled and skeleton competitions on TV, it’s hard to appreciate all that goes into it, deBot says. Teams of engineers design and produce state-of-the-art sleds for athletes who devote daily training to strength and speed. In the end, competitions can be won or lost by hundredths of a second.

“An amazing combination of things must align for them to have success. They don’t just show up, push a sled off a hill, and go down,” deBot says. “They’ve got to push, drive, focus, and coordinate timing. It’s incredible what comes together to achieve what they’re able to achieve.”

The merging of American motorsports with sliding sports elevated the game. In 2010, the men’s four-man team won the gold medal — the first gold medal for Team USA in the sport since 1948. It was 2014, however, that changed everything. That year, U.S. men’s and women’s bobsled and skeleton teams medaled in six different competitions on sleds with roots in deBot’s shop. 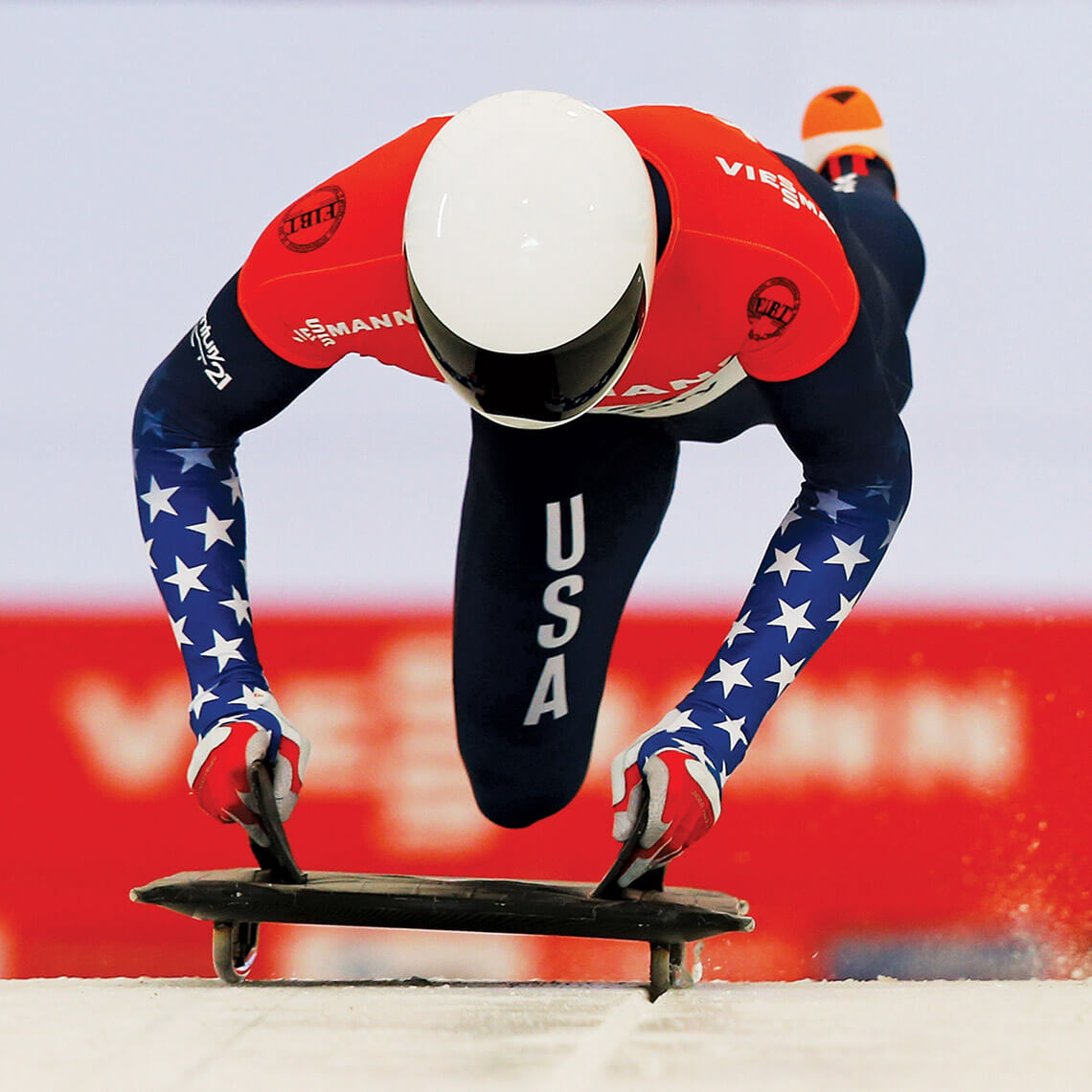 What better place to celebrate those wins than Mooresville, Race City USA?

“We put on the dog for three days,” deBot says of their post-Olympic celebration. He kicked off the Mooresville celebration by inviting the athletes to meet the folks in his shop who’d designed and built their bobsleds and skeletons, and the locals who’d supported the teams from afar. Then it was time to party. They rented a Ragin Uptown party bus, which took them to a Charlotte Knights baseball game and then to a private table at Whisky River, Dale Earnhardt Jr.’s former Uptown bar. Another night, they embarked on a Catawba Queen dinner cruise on Lake Norman.

And then, deBot and his team got back to work.

For deBot, designing and building Olympic bobsleds and skeletons isn’t about profit. It’s about patriotism. After diving into the worlds of bobsled and skeleton, he felt shocked to learn of the financial strain that can fall on athletes. So after he designs and builds the sled components, deBot donates them to the teams.

“You’ll find that a lot of athletes [in sliding sports] have GoFundMe pages to afford to go to the Olympics or to afford to train,” deBot says. “It’s the one time when the world stops and comes together to root for our athletes. This was an opportunity for us to [help], so we did.”

This isn’t the only way that deBot plays Santa with deBotech. His company has designed, pro bono, carbon-fiber prosthetic legs that allow canine amputees to run and frolic. When he was approached about that project by Houston PALS, deBot’s response echoed the one he gave to Rosselli in 2002: “Let’s get it developed and see how it works, and at the end of the day, let’s make a difference.”

“The most rewarding things I do have nothing to do with money,” deBot says.

Is it destiny or coincidence that a kid who grew up competing in a hometown sledding competition would one day propel Olympic sliding teams toward medals? To deBot, everything takes its natural course. So it’s fitting that the kid who waxed his runners at the top of icy hills now helps Olympians speed down them.

In February, deBot and his team will pause their workdays to watch the sliding events during the Olympics in Beijing. On the big screen will be the sleds that began in that very shop.

And what happens if Team USA adds to its collection of Olympic medals in bobsled and skeleton? Well, deBot says with a laugh, they’ll have to plan another party.