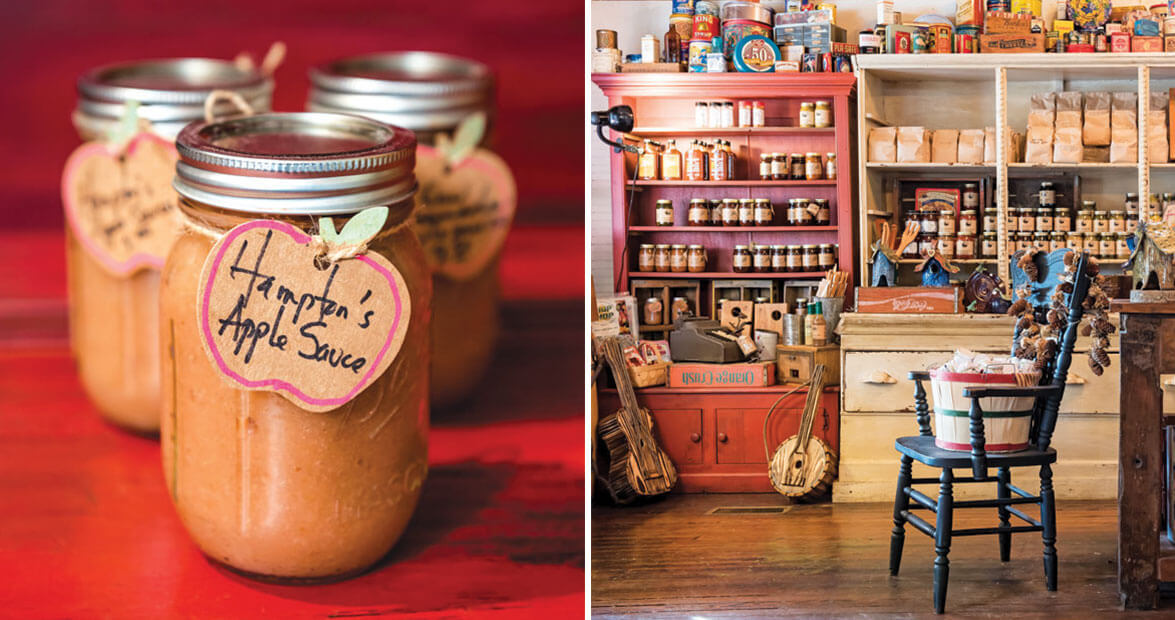 The joint is jumping. Johnny Cash’s deep baritone resonates from the speakers, mixing with the clamor of kitchen prep, the bartender explaining to a patron what goes into a Mountain Thyme Blueberry Gin Smash, and customers perusing the display of chowchows and watermelon-rind pickles. There’s the trio of musicians tuning up for the daily performance. And the lunch line of jostling locals and leaf peepers, parkway cruisers and visitors from other countries, toddlers, parents, grandparents, and long-haired mountaineers.

It’s noontime at the Old Hampton Store Barbeque & Tavern, located a few turns from the famous sign for Grandfather Mountain and a far cry from the manicured golf courses and summer homes hidden or perched above the resort community of Linville. Might as well join the line.

You’ll need the waiting time to study the menu and make a choice: the pork skins with pimento cheese, fried bologna, and fried pickles; the smoked turkey drumette; the plate of “Nuttin’ but Sides,” red or white slaw, and whatever “French-Fried Pork Poutine” is. Sure, you can order the Cobb salad, but most folks go straight for Old Hampton Store’s best-selling pulled-pork barbecue sandwich on a sourdough roll, sought after by both international travelers who’ve never heard of barbecue and the convoys of motorcycle riders ripping their way through Linville Gorge. Whatever food you choose, it’s made on-site, from the sauces and meat rubs to the desserts.

Abigail transformed the historic site with “blood, sweat, tears, and a lot of my youth.”

Pick up your red plastic basket and take a seat nearly anywhere indoors: at tables next to the stage or on a single plank bench affixed to the wooden walls. Wherever there’s a space for sippin’ or jawin’, eatin’ or listenin’, there’s a stool to pull up. Or mosey on outside of the two-story clapboard building to the front porch, where the railings are lined with whimsical birdhouses and hollowed logs filled with ferns and flowers. Settle in at a rustic table overlooking the narrow, dirt parking lot, unchanged since 1920, when the Old Hampton Store was the Hampton and Perkins General Store.

Back then, the store carried everything from clothing to cabbage, and you could pay for it with a chicken. The East Tennessee & Western North Carolina Railroad from Johnson City delivered products — and summer homeowners — by way of a track right behind the Old Hampton Store Gristmill, where the railbed is still visible. The caboose, along with the Linville Depot, was eventually relocated a few miles down the road in Newland, and the engine — known as Tweetsie for its distinctive tweeting whistle — now resides in Blowing Rock. Yep, that Tweetsie. 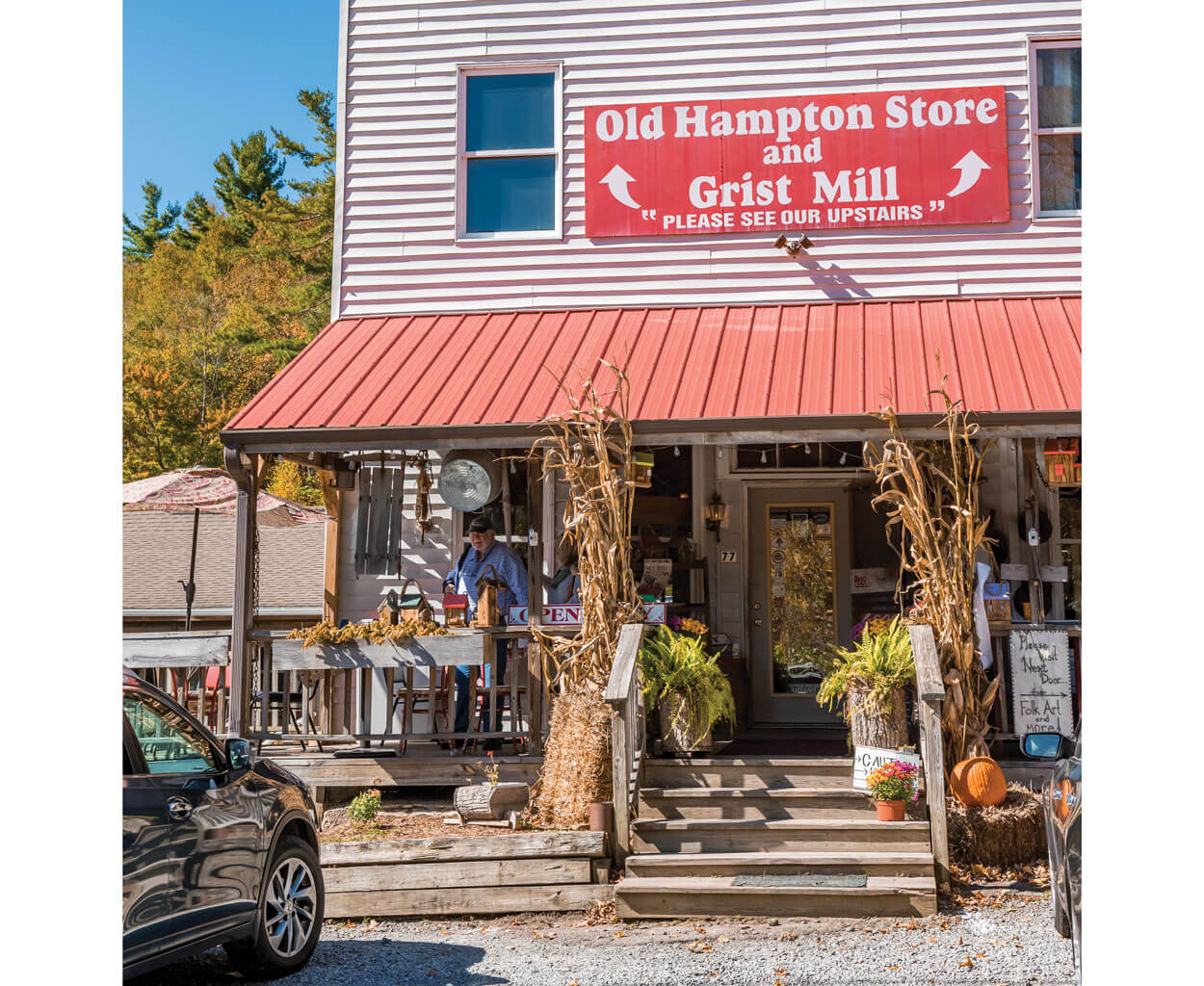 On its signage, flyers, and menu, “Old Hampton Store” goes by a few variations on that name. But if you say those three words anywhere in the Linville area, folks will know what you’re talking about. photograph by Emily Chaplin

Abigail Sadler Sheets and Steve Sheets moved to Linville from Southern Pines in 1984 for Steve’s career in golf course management. Abigail, an artist, bought what had been the Hampton homestead next door in 1999, and she opened a gallery to display her work and that of other local artists and craftspeople. In 2003, the adjacent complex of outbuildings — meatpacking house, smokehouse, gristmill, miniature church, and barn, as well as the general store — came up for sale. The Sheetses jumped at the opportunity, and transformed the historic four-acre site with, as Abigail puts it, “blood, sweat, tears, and a lot of my youth.”

The “little church” has a steeple small enough to put your arms around.

The old general store building is now a restaurant, which includes the area where nails and shovels were once sold. The store’s original walls, floors, and footprint remain, and the atmosphere is preserved with vintage soda bottles lining a high cabinet; long, cast-iron ladles and other tools nailed to beams; and wagon-wheel light fixtures. The tavern, which occupies a cozy rear-corner niche, opened three years ago to serve draft beers and craft cocktails. And though the food and fixin’s are a definite draw, Old Hampton Store Barbeque & Tavern is now as much a music venue as anything else, featuring — during the season — a different band of singers and strummers on an indoor stage every day at noon and 6 p.m. Weekly pass-the-hat concerts benefiting Avery County aid organizations are held in the rambling, shady backyard, where as many as 500 people can congregate on the grass next to the old meatpacking house, whose front wall bears a vintage sign with an unpunctuated request — “This is a gospel sing please treat it as one” — that’s probably routinely ignored. 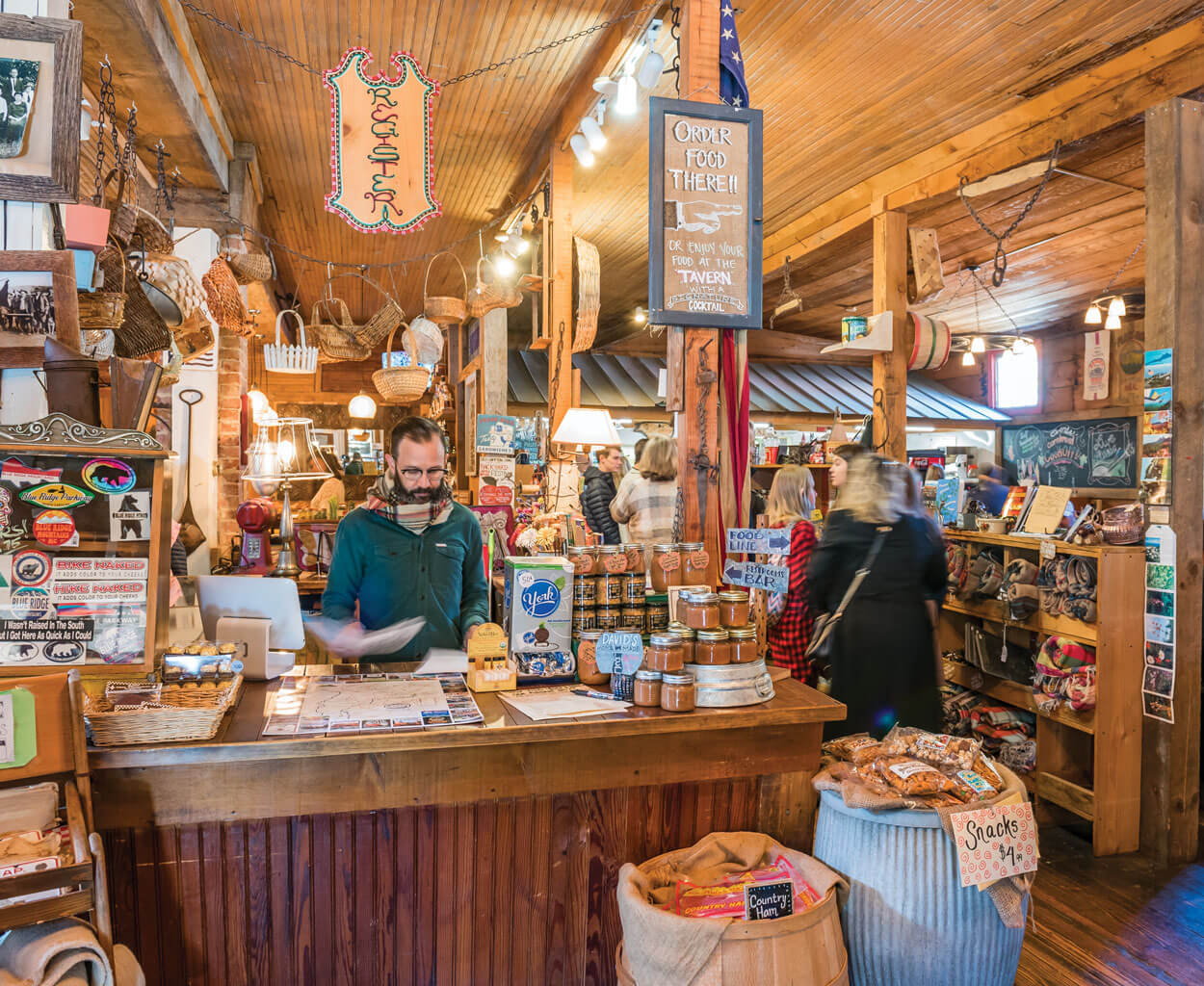 David Schmitt (behind the counter) will gladly ring up your candies, homemade treats, pottery, and other arts and crafts found inside the Old Hampton Store. But if you’re there for the barbecue and additional restaurant menu items — well, as the sign suggests, order over yonder. photograph by Emily Chaplin

Abigail means it when she says that everything possible on the menu is prepared on-site. Inside the original smokehouse, aproned pit boss Tom Sirrilo chops Boston butts that have been smoked for 11 hours. Chefs use herbs from a garden growing near a big metal sculpture of a dragon known as Rose.

When it comes to heritage crafts, which are important in this tight-knit community, Old Hampton Store talks the talk and walks the walk. The old meatpacking house now functions as a residence for visiting artists to create their works and hold public classes. In the gristmill, still roofed with corrugated metal, you’ll find blacksmith David Burtt, who fashions contemporary and traditional hardware, handrails, and gates on an anvil beside glowing embers. One door down is the pottery studio and outdoor kiln where Abigail and visiting potters ply their trade and instruct novices on the wheel. The “little church” — the size of a child’s backyard playhouse — was brought in from Harmony, complete with a squared steeple small enough to put your arms around. It’s home to a woodworker, who brings his talent and tools out into the yard for demonstrations. Abigail’s art gallery has expanded into the barn, where she displays and sells regional folk art, pottery, whimsical items like bicycles and vintage school desks, and memorabilia documenting the store’s history, from photographs to bills of sale. 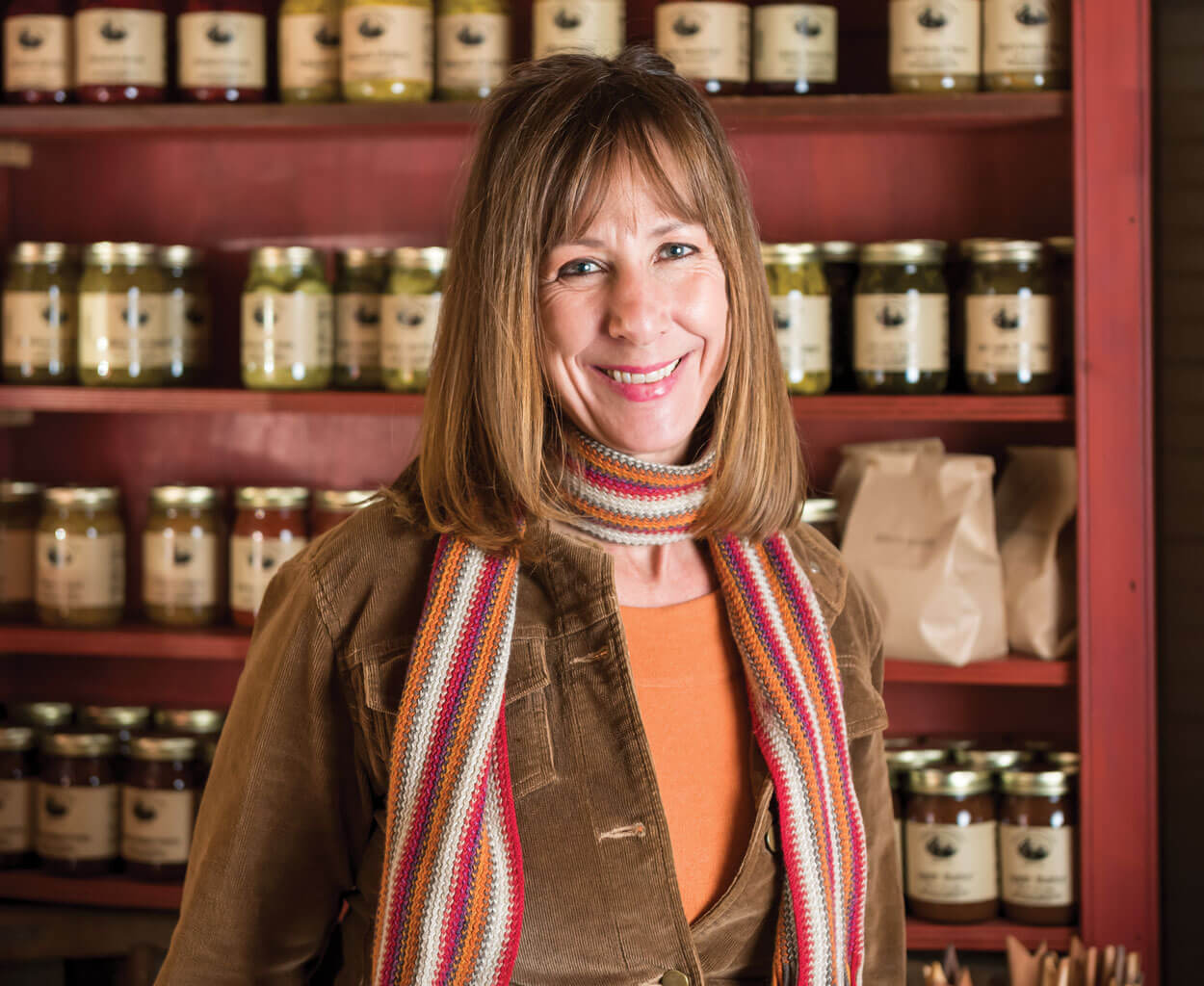 Abigail Sadler Sheets, the owner of Old Hampton Store Barbeque & Tavern, is also an artist who is eager to support fellow local artists of all kinds. photograph by Emily Chaplin

Despite all that takes place in this mini village, the store and restaurant claim center stage, not just because of the food and ambience and wares, but also because of what they mean to the Linville community, past and present. To maintain the balance, the Old Hampton Store hosts Ramp Fest each May, a weekend when everything ramp — wild cousin to a leek — is celebrated and concocted, from pickled ramps to ramp salt to ramp cheese. June brings the annual Cornbread Cook-off, where professional chefs and home cooks alike try to best one another in preparing the South’s favorite staff of life. Come October, there’s the yearly apple butter-making event in the backyard. J.D. Hughes, a local fellow related to the original Hamptons, hauls in his 100-year-old, 30-gallon copper kettle and begins cooking the sweet spread at 7 in the morning. It “comes off,” Abigail says, some nine hours later, and they do the canning “hot, right there.”

Food and music have always been the heart and soul of community gatherings at Old Hampton; 99 years on, the Sheetses make sure that those traditions continue. In 1920, the word “vibe” wasn’t yet a part of our vernacular, but today, this joint has mountain vibes to spare in its artistic and culinary offerings — so much so that the Sheetses’ two sons are part of the business, too, one having left the ultra-hip Portland, Oregon, scene to come back home to Linville. In the near future, a centennial celebration of some kind is in order for this Linville institution because, heaven knows, there’s not enough going on already. Meanwhile, the Sheetses will keep coming across old mule shoes buried around the place — and nailing them to the walls for luck and love of Linville’s storied past.