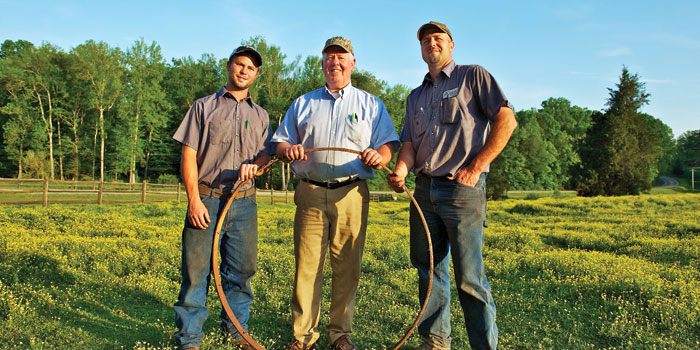 A wagon sits in Salisbury, and a rusted iron rim leans against a springhouse in Cleveland. They’ve both been here a long, long time. And they tell the story of North Carolina’s ancestral highway, the Great Wagon Road.

It’s long gone. That dirt path first blazed by buffalo and deer 400 years ago is now covered by paved highways throughout central North Carolina, such as U.S. Highway 220 or U.S. Highway 311. But more than 250 years ago, that path was Colonial America’s Interstate 95. It stretched for more than 700 miles — from Philadelphia, Pennsylvania, to Augusta, Georgia — and helped create cities we know today as Winston-Salem, Salisbury, and Charlotte.

It started as an Indian path that followed the bend of rivers and the rolls of the Appalachian Mountains. But in 1744, following a series of treaties with the Iroquois, the colonists opened the path for those wanting a new life.

They were hardy folk, these German, Swiss, and Scots-Irish immigrants. They crossed an ocean; settled in Pennsylvania; and traveled south to find affordable land, religious freedom, and a better future.

They rode horses — if they were lucky. But many times, they walked. And they walked alongside wagons carrying everything they owned, traveling through the toughest time of year: winter. They didn’t leave until after harvest, and they wanted to be settled on new land in time for planting season.

On horseback, they covered 20 miles a day. Maybe. With a wagon, they went five. So, their trip took months. Rivers flooded. Wagons broke down. Supplies gave out. Sickness came — with no doctors. And they still traveled south.

Sometimes, when the Great Wagon Road turned tough, travelers disassembled their wagons and carried them piece by piece — along with everything inside — until the road leveled out and didn’t rise and fall like an angry sea.

These colonists were the people who settled North Carolina, and they came down a road that narrowed and snaked through woods thick with foliage, animals, and who knew what else.

The road was a dusty, muddy mess, covered occasionally with planks or stone. It smelled like a barnyard and felt like a circus, filled with oxen and horses, cows and pigs, farmers and craftsmen, big families and lone adventurers.

Yet, it turned into the backdrop for the people who helped mold American history and the spine for the personal stories told by families today whose ancestors traveled that rough road.

Those ancestors had names like Knox and Braun, and they came to North Carolina and found what one 18th-century surveyor called “delicious country.” Those families still call North Carolina home today.

The big wagon in the Rowan Museum in Salisbury didn’t travel the Great Wagon Road. But the people who made it did. They were the Nissens from Salem, now known as Winston-Salem. They were wagon builders who came down the Great Wagon Road, set up shop in Salem, and made wagons that carried everything around the agrarian South.

The museum’s wagon was built in the 1860s. Kaye Brown Hirst, the executive director of the Rowan Museum, discovered it in 2000. A family contacted her. She found it in a barn, tucked between two corncribs and covered in dirt, bird droppings, and cobwebs. Hirst and other volunteers pulled it out by hand, and when they did, she saw something that still makes her say, “We got a good one.”

On the side, barely legible through the grime, was this stencil: “J.I. Nissen, Salem, N.C.” She knew the name. She later found out what it meant. This wagon was made by John Israel Nissen, a man whose ancestors came down the Great Wagon Road.

Volunteers cleaned every inch with a dry brush, and today, John Israel Nissen’s wagon sits inside the Rowan Museum.

It’s worn with a faded-paint body the color of stonewashed denim. It’s packed with everyday items necessary in early America — a loom, a cooking pot, a wagon jack, a flax hackle — and it tells the story of the migration that created Salisbury in 1753.

First the word, Conestoga, America’s first big truck. It was made in Conestoga, Pennsylvania, and it was one huge wagon: 26 feet long, 11 feet high, with the capability of carrying 8 tons. Pulled by five or six horses and followed by as many as a dozen packhorses, the Conestoga wagon became any traveling family’s best friend.

It became the expected sight along the road known by many names: the Warrior’s Path, the Carolina Road, the Valley Pike, the Great Philadelphia Wagon Road, or simply the Great Wagon Road.

With a body the shape of a swaybacked horse, Conestogas could float across a river as long as the wheels were taken off. And those wagons were so heavy and laden with a family’s every possession, they created deep wheel ruts all along the Great Wagon Road. You can still see those ruts beside the Yadkin River.

“The chronicle of the Wagon Road is the chronicle of infant America, from 1607 until the age of the railway,” Parke Rouse Jr. wrote in his 1973 book, The Great Wagon Road. “It’s the story of achievement against great odds. Breaking with the European traditions that they brought with them to America, the diverse settlers along the Wagon Road began to create the new American society, which changed the 19th-century history of the world.”

If you look, you’ll find remnants and representations of the Great Wagon Road across central North Carolina. There’s a diorama in Mount Airy, plaques along the Yadkin River, historical markers in quaint places like Walnut Cove and Lewisville, and of course, North Carolina’s timeless highway sign, Pilot Mountain, which helped colonists know they were getting close to the place they called their “dear home.’’

Then there’s the rusted iron rim. You’ll find it on the Knox family farm in the tiny community of Cleveland in northwest Rowan County. The rim acted as the outer belt of an old wagon wheel, and it leans against a springhouse, one of the farm’s oldest buildings.

That springhouse is situated on land the family patriarch, John Knox, settled on long ago. He, too, came down the Great Wagon Road.

According to the Knox Family Records, a book that’s 250 pages long, John Knox left Ireland in 1740. He spent three months on a ship; arrived in Pennsylvania; and like many farmers of his time, soon started looking southward for land.

He came to Rowan County a decade later, carrying with him letters of recommendation that stated he was a man of integrity and good character. He was 40, married, with seven boys and one girl. He bought 600 acres on the south side of Third Creek and started a farm in 1751. The Knox family still lives there today.

They don’t know if their iron rim came from the wagon John Knox used in his travels. They just know that their rim has been on their farm forever — always leaning against the springhouse.

Robert Knox first noticed it as a kid. Now, he’s 61, a father of four and a grandfather of three. His grandchildren call him Papa, and he’s the eighth-generation descendant of John Knox. Along with his first cousins, Ben and Clark Knox, Robert runs a farm that covers 1,100 acres.

His cousins grow wheat and corn. Robert and his two sons, Luke and Jacob, raise replacement dairy heifers. All near that rusted iron wagon rim, the telltale sign of one man’s travels.

Ask Robert about that rim, and he talks about his family’s hard-life roots and the importance of working the earth, appreciating the landscape, carrying on his family’s legacy and being, as he says, “just close to God.’’
And how did it all start? With a trip down the Great Wagon Road.

Jeri Rowe, a Greensboro resident, is a staff columnist with the News & Record. Jeri’s most recent story for Our State magazine was “Call of the Cabin” (March 2011).