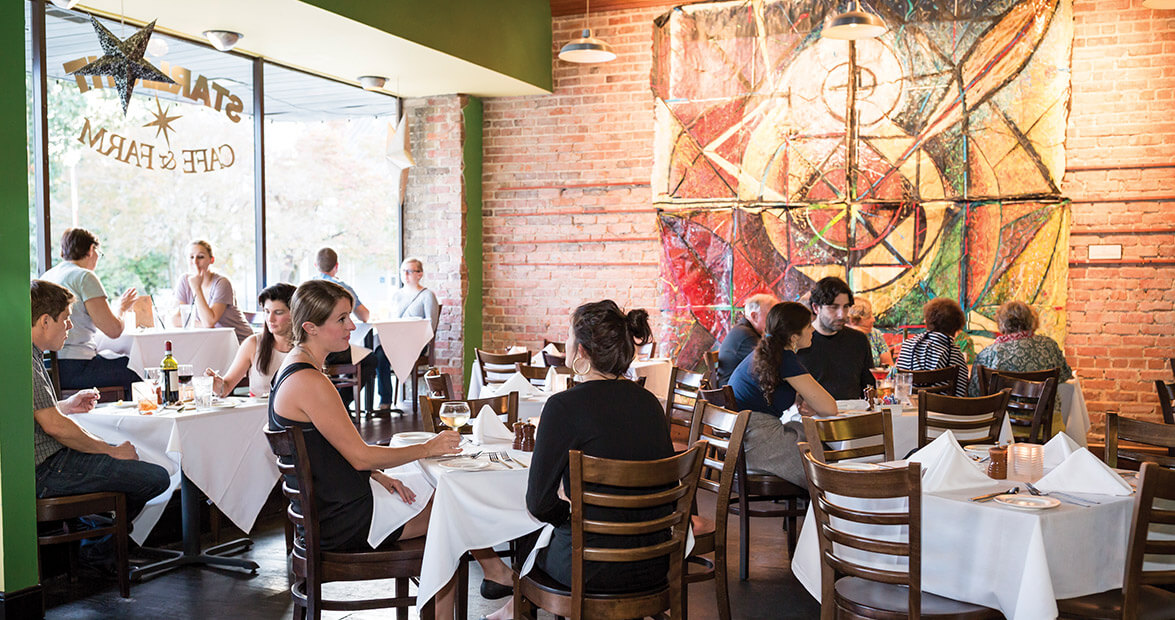 Which came first? The chicken or the egg?

Here’s another one: Which came first? Starlight Farm and Gardens or Starlight Café, in downtown Greenville? Hmm. How does an entire family, including a 7-year-old, grow, cook, serve, and run a restaurant with a mouthwatering menu and to-die-for dishes?

And they’re all so unnervingly calm.

The story starts like this: Husband and wife Alan and Susan Boutilier land in Greenville in 1998, when Susan takes a position as a pediatric neurologist. In ’99, Alan, who’d been a restaurateur in California in the ’80s, says, “Honey, we need a restaurant.” They open Starlight Café a year later in the old Brody’s department store on West Fifth Street, where the entrance to the building still says so in colored tiles beneath your feet.

In 2002, Toby, the oldest son, comes home to the Starlight Café after apprenticing at restaurants including Crooks Corner in Chapel Hill, and serving as executive chef at a restaurant in New Jersey. In the way of classic love stories, he meets and marries Kelly Hart, a server at Starlight, and daughter of longtime East Carolina University Athletic Director Dave Hart. (Today, Kelly handles Starlight Café’s front of house.) For four years, Alan looks for a farm, and on his 65th birthday, he finally finds it: 23 acres of pastoral perfection, at the end of a dirt road flanked by cotton and cornfields. Two of the three Boutilier children join their parents, bringing their families to live and work on the farm.

And every bit of this homegrown Starlight Farm and Gardens goodness heads to Starlight Café. 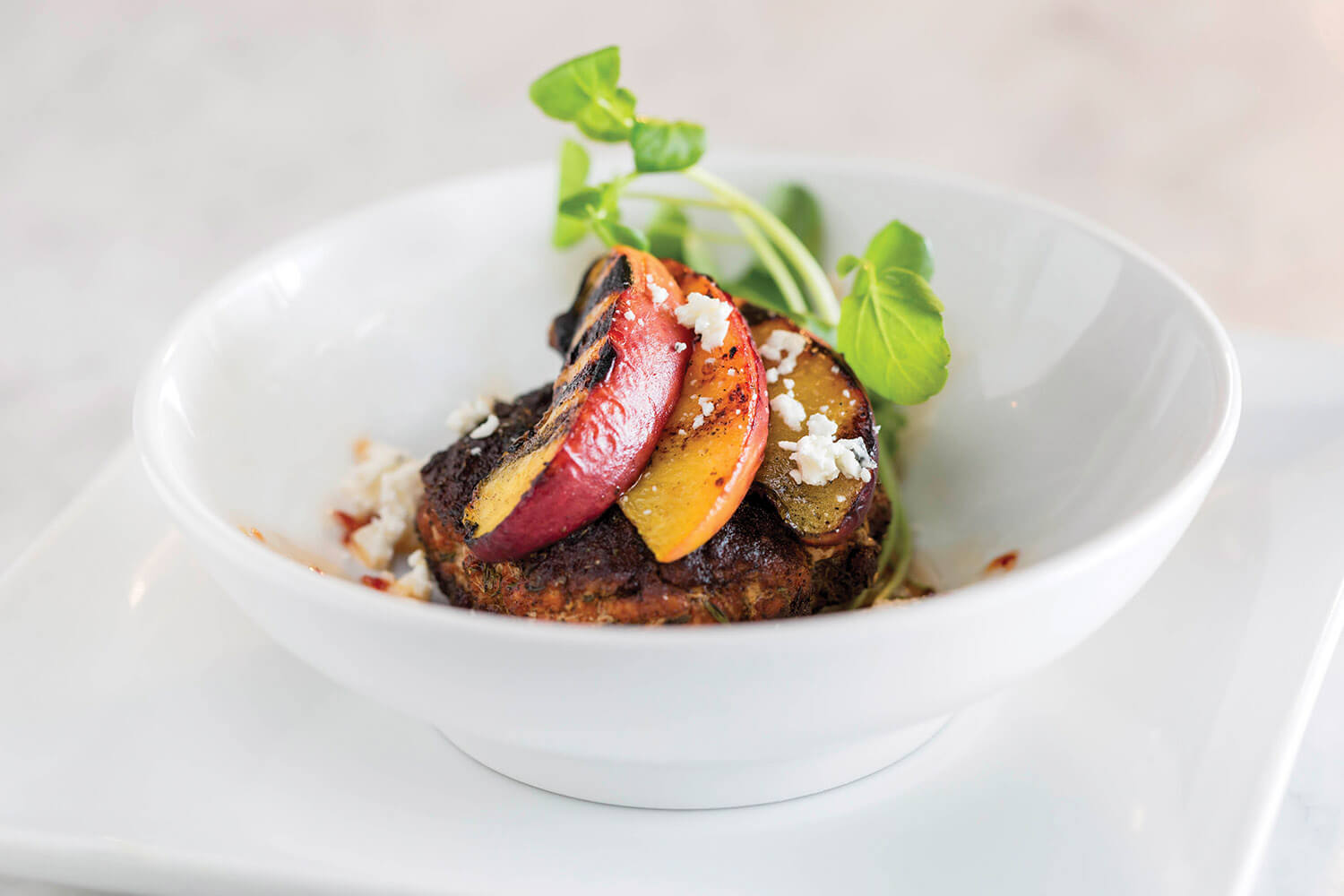 Inside Starlight, the joint is jumping. Having reached its 120-seat capacity, the café and bar is full this Wednesday night. The department store’s original elevated display windows give some diners, seated at two-tops, a people-watching vantage point. Meanwhile, at what one local calls “the bar in Greenville,” bartender Jimmy Ingenito’s specials tonight are a Southern Peach Martini concocted with pureed Renston Farm peaches, vodka, and lime juice — a grown-up Icee the color of a sunset — and a Bourbon Fig Fizz. Those dark blobs in my friend’s cocktail? They’re muddled grapes from Starlight Farm and Gardens. Mint for the mojitos comes from … that’s right.

Sue me, but I’m generally sushi-suspicious. But here comes this ceviche: flounder chunks in a bath of (Starlight Farm and Gardens) cucumber water, along with a scoop of Bloody Mary sorbet.

Executive Chef Toby, the mastermind behind such dishes, was working in a restaurant by sixth grade, standing on a platform to wash dishes. By 17, to his parents’ dismay, he was going in the front door of school, and out the back in the same five minutes. Cue a GED, and California Culinary Academy in San Francisco.

To appropriate a food-appropriate maxim, apples don’t fall far. Climbing into his grandmother’s lap is Kingsley, Kelly and Toby’s 7-year-old, who’s been hanging around Starlight Café since birth. I’m involved at the moment with a pork patty — don’t dare call it sausage — topped with grilled peaches and chèvre, then drizzled with honey and red chili oil. To describe the dish as crusty, salty, soft, sweet, charred, sour, solid, liquid, and hot just barely covers its taste and feel, at least in print. Kingsley wriggles away to shuck some fresh oysters. That’s right. He’s 7, and he’s shucking — never mind eating — oysters. Kingsley has his own Japanese knife, too, and at the farm, he likes digging up potatoes —
“like searching for treasure,” he says —
and, although he hates picking up Legos, he loves gathering eggs.

In comes an ECU professor and part-time baker bearing a beautiful brown boule, a round loaf of French bread. “All of my deliverers come in bare feet,” Toby laughs. No doubt, because most are just a jaunt away. The flowers and vegetables come from La Grange. The rabbits come from Goldsboro. Beef and poultry come from Snow Hill.

Which brings us back to that egg-or-chicken quandary, a situation the Boutiliers found themselves in a few years back, when starting their chicken flock. Of the dozen pullets he and Susan ordered, Alan says, “Even as chicks, they were aggressive.” The quandary, and the reason, was that the pullets weren’t hens at all. Within weeks, they were fighting, domineering, cock-a-doodling roosters.

Then what? Susan smiles ruefully. “It was a bloodbath,” she admits. “But they were tasty. It’s like that,” she says, pointing to a sign above the bar (where you’ll happily find there’s no TV). Be Nice or Leave, it reads.

I’m staying. For Starlight Café’s pecan and honey tart, made with pecans and honey from, naturally, down the road, on the farm.