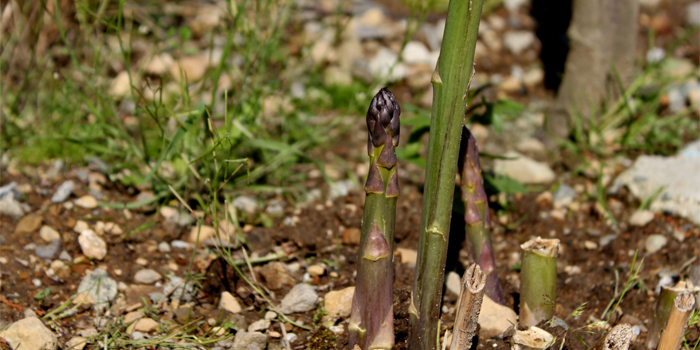 While some maintain it grows best in colder climates, I find its Mediterranean coastal history makes it a successful North Carolina crop. Prized by early Greeks and Romans, asparagus arrive in the New World with European settlers; and its diuretic properties earned it a place in medicinal gardens. In addition to hybrid varieties, I grow French Heirloom asparagus. Unlike most heirloom plants, there is no discernible flavor difference among asparagus types.

Growing asparagus requires a leap of faith because, even 3-year-old plants should not be harvested the first year they are cultivated. Fern-like fronds grow from spears, and the plants need every ounce of nutrition generated from this growth in order to produce the following year. Although early spears may be a temptation, patient gardeners who properly care for asparagus will be rewarded with many years of production.

Also, carefully prepared asparagus beds are necessary for optimum yield; raised rows of soil, two to four feet apart, should be formed prior to planting. Asparagus plants dry quickly and should never be overexposed to sun or air. Furthermore, the white, leggy roots of asparagus crowns must be carefully splayed across a ridge of soil, with each crown in the center of the raised rows. Space plants about 12 to 18 inches apart and cover with five to six inches of soil.

Once established, asparagus is one of the easiest crops to grow organically. Asparagus beetles, the primary insect threat, may be removed by hand. Aside from potassium, its nutritional needs are few. Weeding is a time-consuming, meticulous task, so and I use a special tool to loosen weeds that threaten asparagus crowns and roots. Fall mulching helps control weeds.

Mature asparagus plants, at least four years old, may be harvested for up to eight weeks. If spears decrease in size to a pencil’s diameter, plants are stressed and harvesting should cease. Even if spears are robust and healthy, asparagus should only be harvested for eight weeks. Fronds will often grow to five feet tall and feed plants during summer and fall. Remove fronds when they become brown and brittle, usually in late winter.