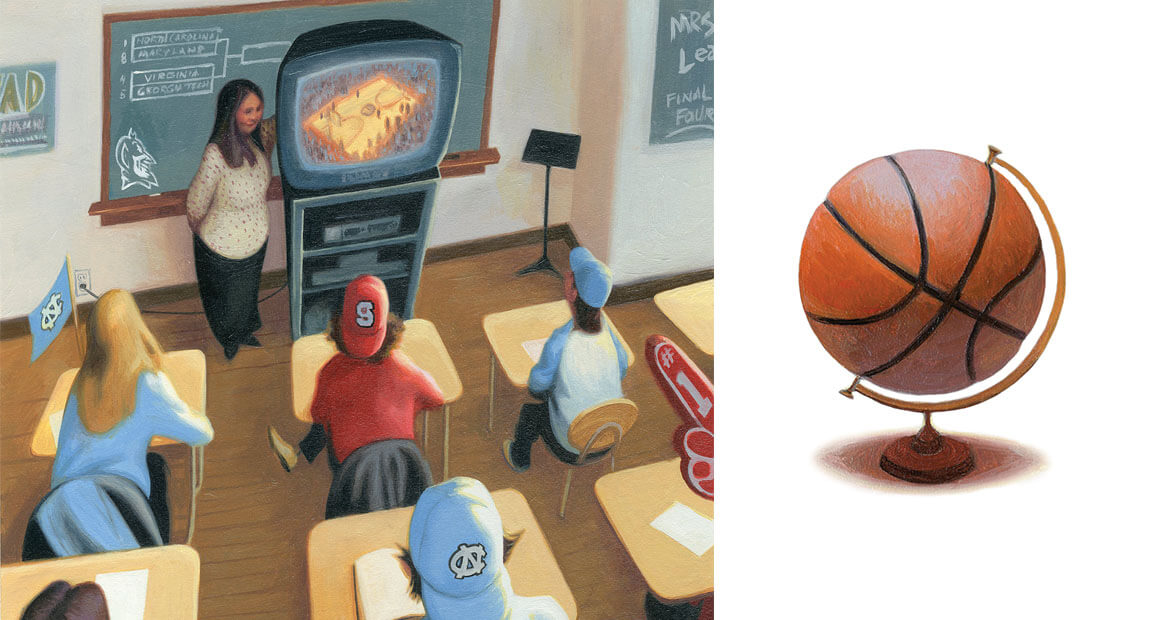 This story takes place in a time before Duke fans had been invented.

It’s true. In the 1980s, at Farmington Woods Elementary School in Cary, we did not know any Duke fans. We knew Carolina fans and we knew NC State fans. That was it. Although I had seen them on television and therefore assumed they existed — probably somewhere far away, like New Jersey — I did not personally know an actual Duke fan until ninth grade.

It was Carolina or State. You had to choose. You couldn’t root for both.

There were two rites of passage among Farmington Woods students. There was “swish,” a bizarre, mint-green fluoride mouthwash that was universally despised. Approximately once every two weeks, teachers would pass out tiny plastic cups, and students would spend 30 seconds of class time swishing and spitting into them. Look, no one said the 1980s made sense.

The other was basketball. Most of us were natives (I told you this was a long time ago) so we already had built-in allegiances. We had, therefore, a solid supply of sweatshirts declaring our favorite team, which enabled us to participate in elementary school Atlantic Coast Conference (ACC) combat. This meant, of course, that if your team won, you wore the victorious team’s sweatshirt on the day after it beat the other team, and then you acted as obnoxiously as possible.

As a young Tar Heel fan — one who was vocal about my loyalty — there was nothing in the world worse than knowing I would have to go to school the next day and face a sea of Wolfpack sweatshirts. In 1987, after NC State defeated Carolina in the ACC championship game, purely to avoid the teasing I knew would ensue, I convinced three State fans at school the following day that the game’s outcome had been vacated due to some nebulous rules violation. It was one of my finest elementary school achievements. Sometimes life without the Internet was pretty great.

“I know Coach Smith is a great coach,” my dad would say occasionally, “but I’m not sure he understands how tough it is to live so close to Raleigh and deal with all the State fans.” If only we could explain it to Dean Smith, he would do something different in the final 30 seconds of the game, just so my father and I would not have to deal with those pesky NC State fans. I could just hear Coach Smith in the huddle with the team: “I’m really worried about Jim and Adam having to go to work and school tomorrow. Let’s go ahead and give the ball to J.R. Reid.”

“I can wear a UNC shirt, you can wear a Duke shirt, and we can still cheer for our teams and be respectful.”

On the first Friday of every March, something amazing happened: the ACC Tournament. This was not the bloated 14-team tournament we know today. There were only eight teams. We knew every player and every coach. We knew the scores of every conference matchup during the regular season. We knew that Tom E. Smith would do the Food Lion commercials during the game and that Dinah Shore would award the Holly Farms Player of the Game afterward.

The teachers — let me rephrase that, the cool teachers — knew that we knew. And so, when ACC Tournament games began on Friday at noon on WRAL-TV (“The Big Five,” as WRAL sportscaster Tom Suiter called it), the cool teachers would arrange for a television to be wheeled into the classroom.

Yes, kids, TVs had to be wheeled. Televisions weren’t standard equipment in our classrooms. They had to be signed out from the media center, and then two lucky kids would be excused from class to fetch the tall black cart that had a behemoth TV set on top. They would wheel the cart down the hall and position it at the front of the classroom. And there would be basketball.

In the fourth grade, I had a cool teacher. Her name was Cecelia Chapman, and she was the teacher everyone at Farmington Woods wanted for fourth grade. Rumor had it that my mother had made a pointed “request” for me to land in Mrs. Chapman’s class after a rough third grade year. Whatever it takes.

Mrs. Chapman, of course, was the kind of teacher who would reserve a television at the media center well in advance of ACC Tournament Friday. Thirty years later, I caught up with her on the phone. Despite my classroom behavior in the mid-1980s, she stayed in education and went on to have a decorated career, including seven years as the principal of Leesville Road Elementary School in Raleigh.

“Math is not always the favorite subject of a lot of kids,” she says. “So as a teacher, who wouldn’t jump at the opportunity to get kids excited to see how math can be utilized in the real world through watching the ACC Tournament?”

Mrs. Chapman passed out permission slips before the Friday of the ACC Tournament, informing parents there would be basketball on TV in a future class. And yes, some parents wouldn’t sign the form. These people, in the mid-1980s, were better known as Communists. Their failure to give permission exiled their kids to a separate classroom with an unfortunate teacher who, presumably, drew the short straw, and those poor students would do non-basketball-themed lessons.

That didn’t render those exiles completely immune from living on Tobacco Road. One year, after Carolina won the ACC championship, the Farmington Woods music teacher organized an impromptu band of Tar Heel fans to parade through the halls of the school, playing the UNC fight song on the only instrument available: recorders. Carolina fans lined the halls to clap along. This was how a generation of college basketball fans was nurtured.

Two of my children, a son and a daughter, were taught by Claire Nelson at Rashkis Elementary in Chapel Hill during the past five years. Mrs. Nelson is also a cool teacher.

She does not, however, have to sign up to have a television wheeled into the classroom on the day of the ACC Tournament quarterfinals. She’s been known to use tournament games to teach multiplication. There’s a rumor that another teacher in the school might even organize an NCAA Tournament pool (purely for entertainment purposes).

Admittedly, it’s not completely instructional time. But ACC Tournament time is guaranteed to include some of the most-remembered days of the school year.

“Instead of academic lessons, I think the kids are learning more about life lessons,” Nelson says. “I can wear a UNC shirt, you can wear a Duke shirt, and we can still cheer for our teams and be respectful.”

That’s right — they have Duke fans in schools now. I hope they all have to swish.