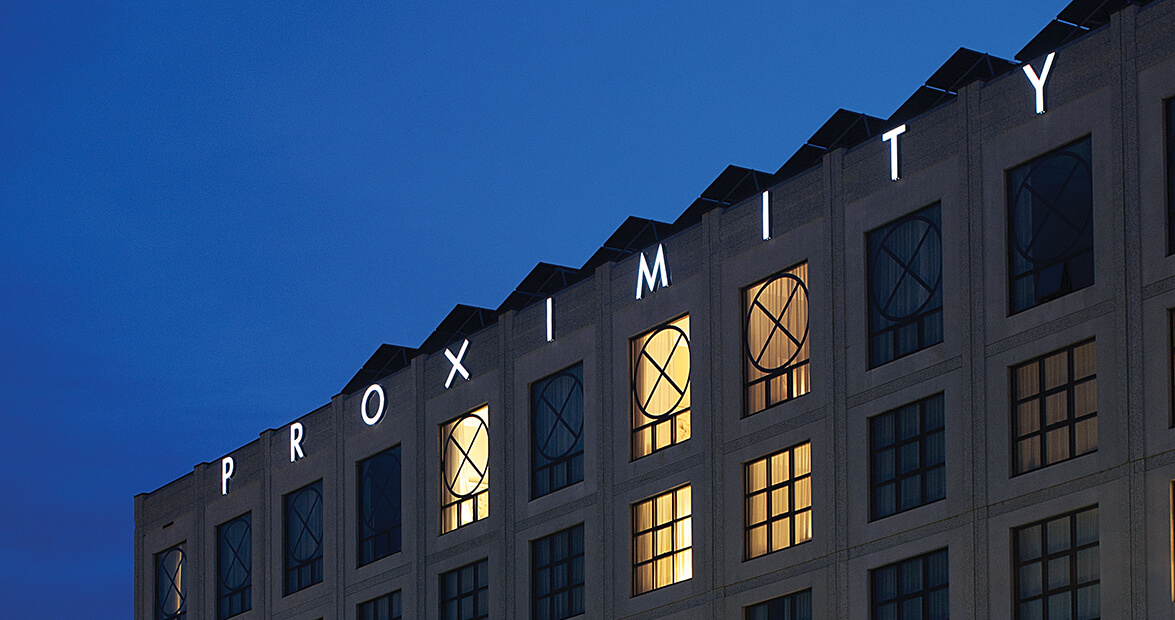 Surely no one ever outgrows the Eloise fantasy of living in a hotel. Of having the bed made every day by someone else. Of hearing that discreet knock on the door, the polite, slightly questioning utterance — “Room service?” — and having your meal rolled in, uncapped, and presented with a flourish. Of having everyone, from the manager to the doorman, know you by your first name.

The employees of Greensboro’s O.Henry and Proximity hotels know Dennis and Nancy Quaintance by name, indeed. The husband-and- wife team are the owners, or, in the vernacular of their trade, hoteliers and proprietors. They bear no resemblance to the beloved, occasionally bratty, eternally curious, wild-haired heroine of Kay Thompson’s Eloise books.

But when Nancy broke her ankle on a European hiking trip, the couple found themselves as guests in their own hotel. Hobbled by pins, screws, and surgery, and unable to drive, Nancy (and, of course, Dennis) spent 30 days and 30 nights — not quite Noah and the ark, but still — living in the couple’s own, well, creations. 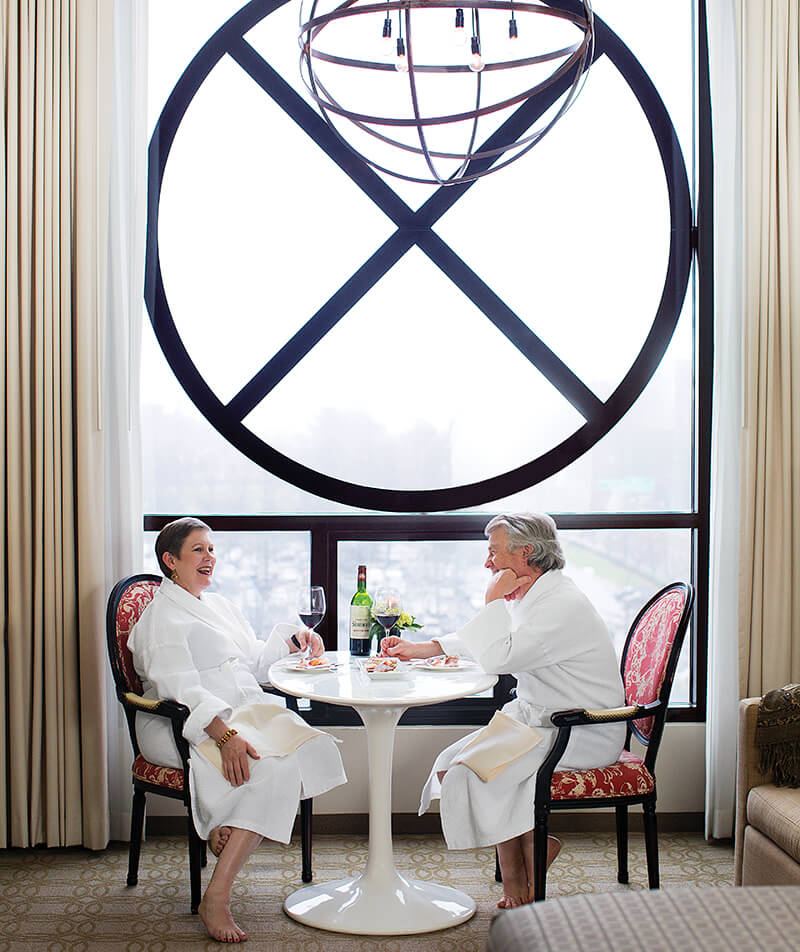 Think of it. Are the comforts of home transferable, available in a hotel? Really? That reading light with the angle you love. The chair you always sit in, whose back hits the nape of your neck at just the right place. When you want peanut butter crackers balanced on your belly while you binge-watch Netflix in bed.

The short answer: yes. The Quaintances have always designed and furnished their hotels the way they want to, and do, live at home. “We’re our own demographic,” is how Dennis puts it.

Nancy sews most of her clothes, and at the time of their month-long hotel stay, she was working on a poncho with intricate reverse appliqués. Good lighting was an absolute necessity, and with six lamps in every room, each with two bulbs that have two settings, she was able to complete her work with ease, and illumination. She missed, though, another occasional table to hold her sewing “stuff,” and another throw pillow or two for back support. This just in: additional accent tables and throw pillows have been added at both lodgings.

The shower stool, the “wand” shower head, the ferrying to off-site meetings and appointments. Handicap access is a given, and what isn’t right will be righted. Yes, ma’am, the O.Henry and Proximity guest services and taxi team can accommodate you.

• • •
Let’s face it; the bed’s the thing. “I think it’s arrogant to tell someone how they want to sleep,” Dennis says of what he calls the “bed wars” currently raging between hotel chains. When traveling, the two immediately remove the stuffing from the heavy, hot duvets ubiquitous in European and American hotels. For their Greensboro hotels, the coverlet was created in the same fashion: three-sheeted, but with a thinner layer of warmth. Hey, it’s North Carolina, not the North Pole.
• • •
If three meals a day, multiplied by 30, and prepared in someone else’s kitchen, sounds like heaven, the Quaintances would agree. They ate most breakfasts outdoors, and for lunches and dinners, they never repeated an entrée.

Rooms are furnished with a desk and a table — a two-top, the better to stare into your sweetie’s eyes, or to spread the free magazines and newspapers on. “We read every magazine,” Nancy says. And worked in every public space, used every public restroom — Nancy realized people would appreciate a seat in here while touching up hair and makeup — and took advantage of every amenity. 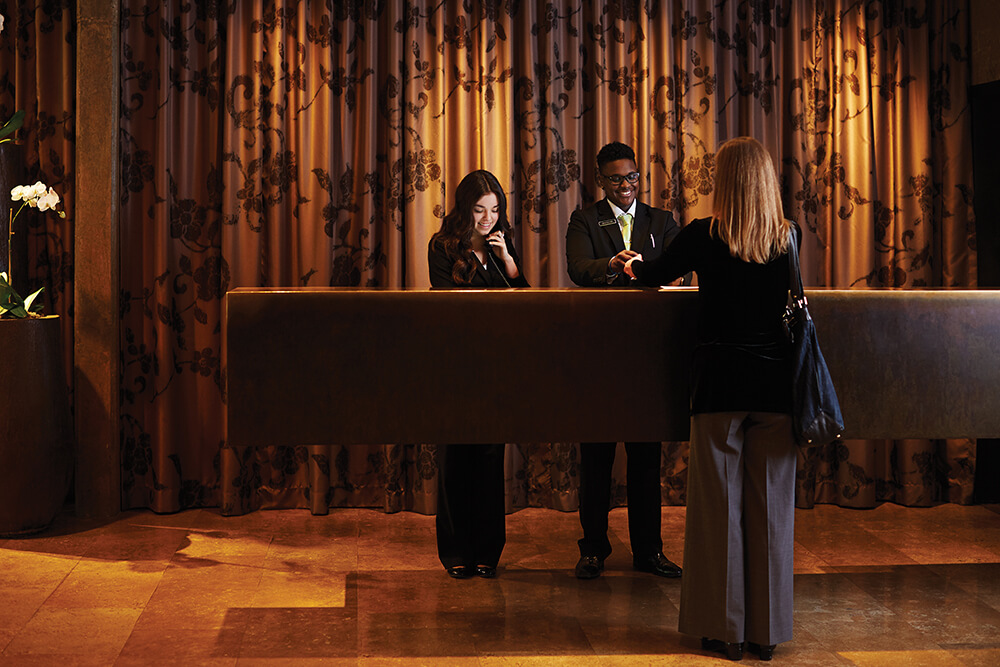 Although the couple makes surprise overnight visits to the O.Henry and Proximity, this stay fell into a different category and context. You wouldn’t imagine the necessity of living in a hotel for a month as the making of a “vulnerable” experience, but Dennis felt that way.

Normally, the Quaintances regard service and rooms and food and drink with “squinty eyes.” They lived and experienced them, however, with “soft eyes.” Initially, they worried about privacy — would that extra glass of wine be noticed? — but never felt theirs was compromised. Dennis describes the “whole weirdness” of their stay as an “out-of-body experience.”

“We’re here every day, working,” he says, “But being here physically and socially — like a guest — was different.”

In a way, that was beneficial, and ultimately, as Dennis puts it, “poignant.” Perhaps like watching your children grow up, strike out, and fend for themselves in the world. A task that living at The Plaza would undoubtedly have prepared Eloise for, if she’d ever had to grow up.