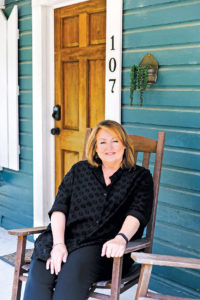 Patterson Wilson is on a mission to revitalize her hometown offering lodging at The Halifax Cottage. photograph by Anna Routh Barzin

Patterson Wilson has spent a good portion of her 60 years telling people she’s from Halifax. Not Halifax, Virginia, not Halifax County, but Halifax the town. Halifax the town, in the northeast quadrant of North Carolina, has a population of approximately 200. It’s a town with exactly no stoplights, where the only likelihood of having a wreck is from running into a historical marker because you’re still reading another of the chockablock silver signs. Not just this building, or this house, but the entire town of Halifax is on the National Register of Historic Places.

And for 18 years, Wilson was from Halifax. She grew up traipsing in and out of her great-grandparents’ house, which happened to be the home of William R. Davie, a commissary general during the Revolutionary War, founder of the University of North Carolina, and the state’s 10th governor.

But on a student trip abroad in high school, Wilson fell in love with England and insisted on attending college there. “I was precocious, I guess,” she muses, but her mother, concerned, sent her to a psychiatrist at Duke. Fortunately for Wilson, the doctor himself was English: “She’ll be fine,” he told Wilson’s mother. Wilson studied fine arts at Richmond College in London, then graduated from the Wilhelmina Boldt interior design school — now a part of Marymount University in Virginia — and went to work for Marriott Hotels in Washington, D.C. 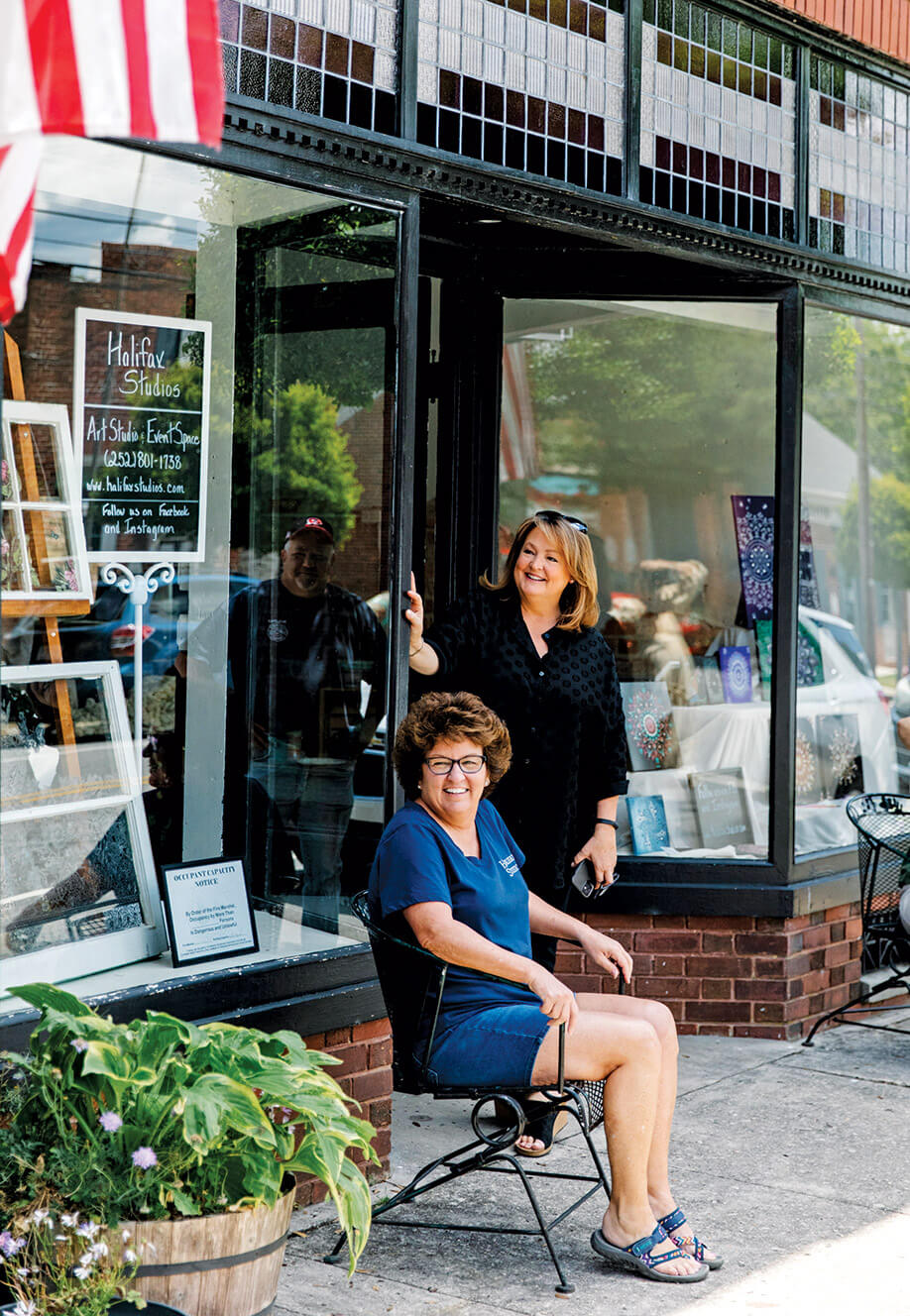 There’s no trace of an English accent in Wilson’s speech. What you hear instead are the inflections of Tidewater pronunciation, when “house” becomes “hose,” and “again” rhymes with “pane.” Perhaps that manner of speaking, and definitely her Southern manners, resulted, during Marriott’s burgeoning corporate environment, in her assignments to a number of hotel design teams, especially one with a tough boss simply because no one else could work with the individual. In the early ’80s, Marriott was expanding internationally, and Wilson worked with famed architects and designers on hotels in Berlin and Bangkok, Amsterdam and Athens, Cairo and Moscow. “I feel like we were blazing the trail to developing the world,” she says, trying to come up with a country she hasn’t been to. From lobbies to bars, restaurants to restrooms, “I thought it was terrible that every Marriott seemed cookie-cutter, so I would always do something different,” she recalls.

But in 2015, after a 32-year career with Marriott, she took early retirement. She abandoned the impressive title of vice president of global design strategies for Marriott International Hotels and adopted a less illustrious — but, for Wilson, more important — title: Ambassador for Halifax.

For its role in these United States of America, Halifax might be the most significant North Carolina town that you aren’t aware of. New Bern, Edenton, and Hillsborough were all key in colonial days, but Halifax, founded in 1757 and a capital when North Carolina was still a colony, was a political epicenter. Yes, the Constitution of North Carolina was written here. Yes, George Washington and the Marquis de Lafayette both visited here.

But it’s what Halifax the town provided to our country that marks it as historically vital. Here, the Fourth Provincial Congress of 83 North Carolina delegates met and adopted the Halifax Resolves. Unanimously approved on April 12, 1776, it was the first official act calling for a nation totally independent from Great Britain. The bold resolution was so well received at the Continental Congress in Philadelphia that it began a groundswell of support in the other 12 colonies, resulting in the creation and signing of the Declaration of Independence three months later.

While Wilson loves Halifax’s impact on American history, she loves Halifax itself more, and was dismayed, on trips home, to witness its steady decline. When a “for sale” sign went up in the window of the town’s last remaining business, she left the sophisticated ports of call of Marriott International, bought two downtown buildings over “one crazy weekend,” and moved home to save them. 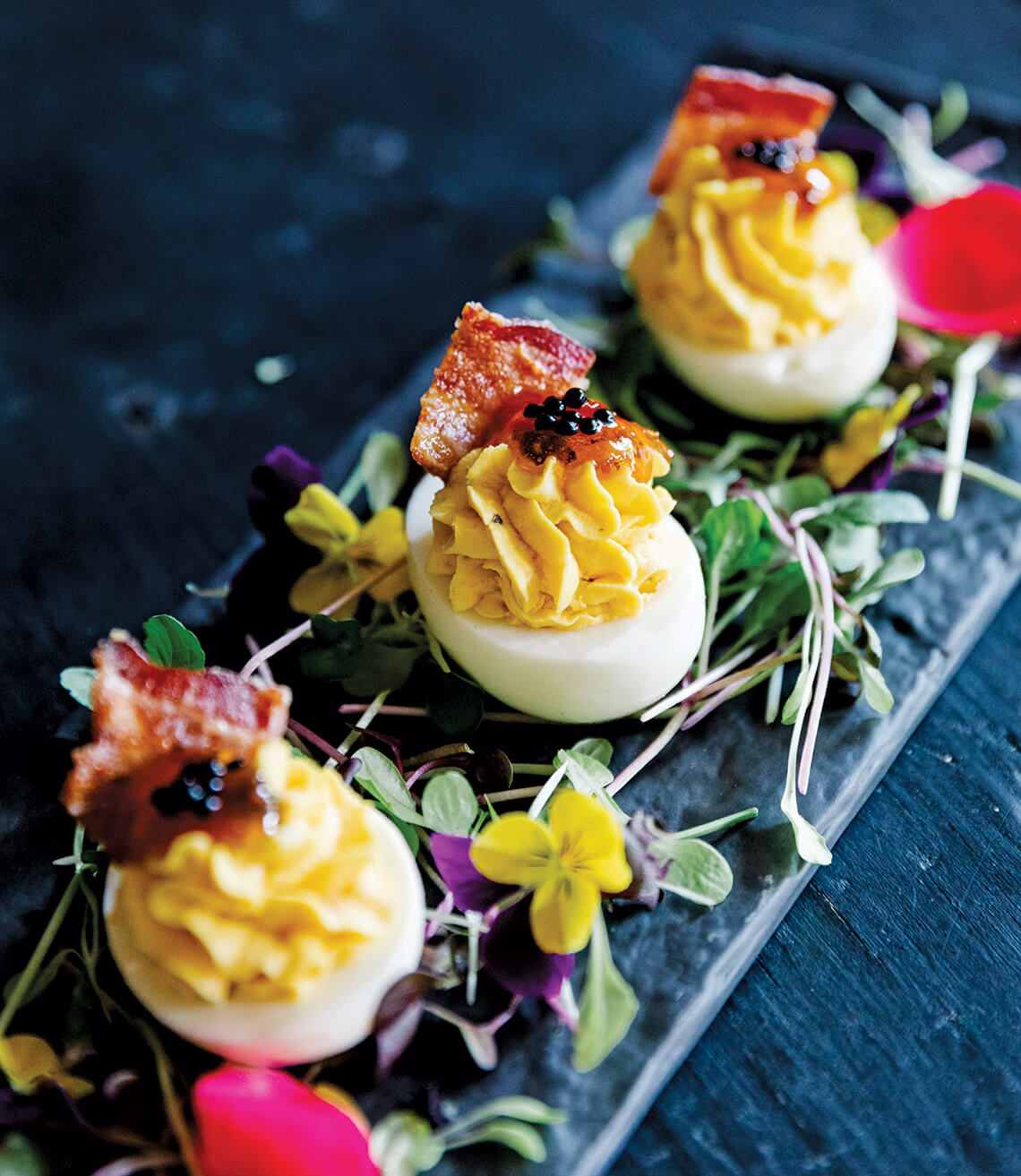 “I never thought for a second that I couldn’t do something that people would want to enjoy,” Wilson says. “I’ll buy them first,” she thought, “and renovate them, then figure out a new business that would be something people would be attracted to and give these buildings new life.” She realized that “people needed a place to gather, to eat,” and so she rehabbed a falling-down hardware store and opened The Hen & the Hog restaurant. It features classic goodies and unexpected delicacies like pimento cheese-infused deviled eggs with candied bacon and truffle pearls, and sweet potato puree with crème fraîche, cardamom, and pickled collards. With its locally sourced menu and comfortably rustic interior, the restaurant has become a destination dining attraction.

Across the street, in another rehabbed building, is her project Halifax Studios, which offers space to artists, display areas for sales, and classes in poured paint, woodworking, stained glass, knitting, and even bonsai. Potter Jim Messer recently finished a pottery class for an engaged couple who wanted personally distinctive dinnerware.

Around a couple of corners is The Halifax Cottage, a two-bedroom house that Wilson restored and turned into an Airbnb. “Halifax is the halfway point between New York and Florida,” she says, and the cozy cottage is perpetually filled with travelers from I-95. Tourists and townsfolk alike browse knitted and leather goods, antiques, baby gifts, and jewelry at the Bass House shop across from the magnificent Halifax courthouse building.

Not that her undertakings have been a breeze. She’s dealt with red tape tangles, bureaucratic blockades, contractor challenges, and people who say, “But it’s so small.” To which she replies, “Our special thing is that Halifax is small. It’s safe. We don’t have any development that changed any of the early 20th-century buildings. No other town has that.”

And the uptick is happening. When a construction company was hired to price the demolition of a hotel on the verge of being condemned, the owner made his presentation to the town, had a drink at The Hen & the Hog, and decided to buy the building himself. Now, it holds retail spaces and apartments. Several units are rented by folks who work in Emporia, Virginia, but wanted to live in Halifax. A Roanoke Rapids couple have restored an old drugstore building on King Street and come to their “town apartment” every weekend to eat, stroll, take a class, go to church. A young Florida couple is renovating a historic house likely built by the same builder as the Davie House. 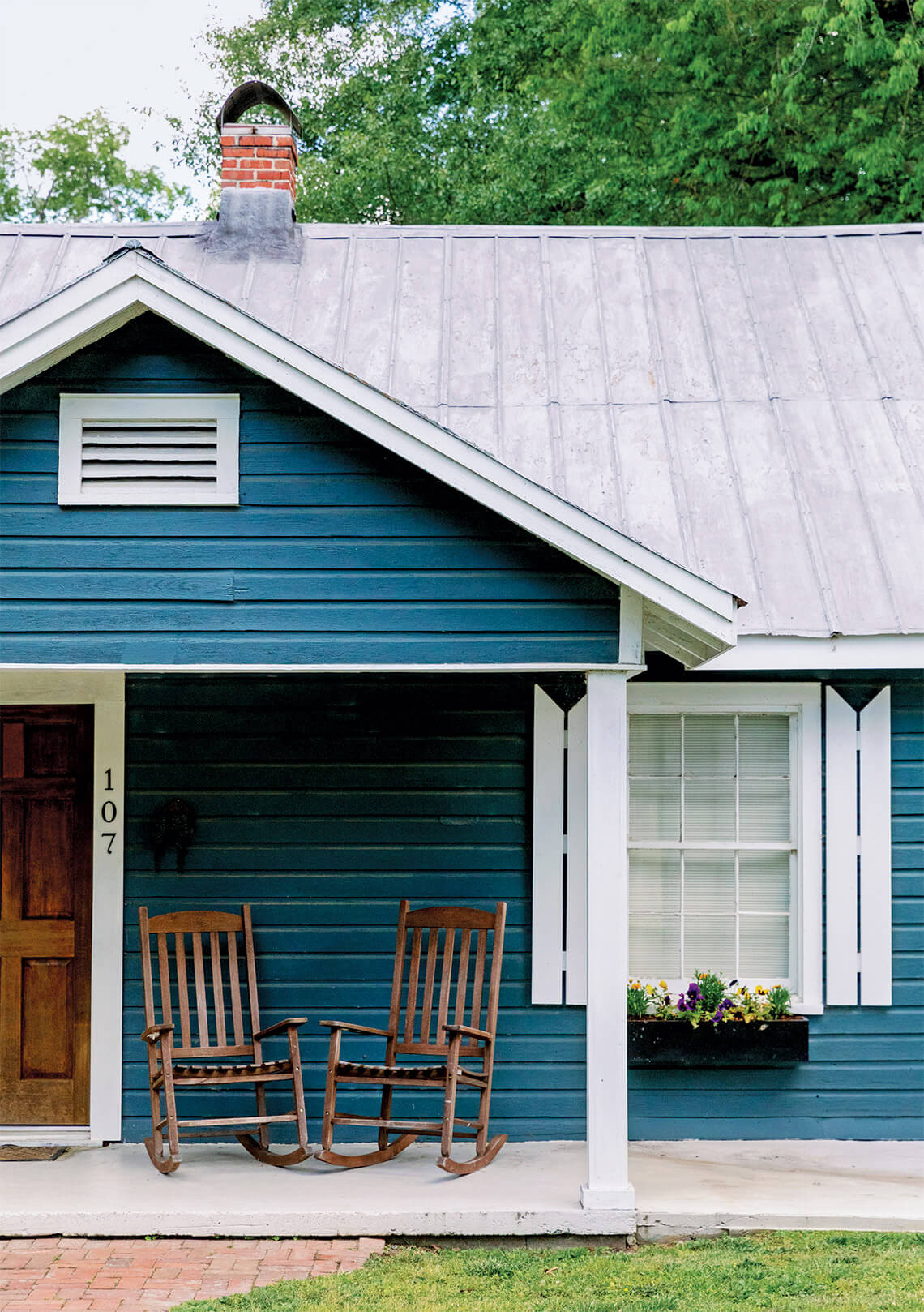 The Halifax Cottage, a two-bedroom house that Wilson restored and decorated with her signature sense of style, is available to rent as an Airbnb. photograph by Anna Routh Barzin

“Halifax is the place to be now in the county,” Wilson says. And she’s not finished. On her to-do list is the soon-to-open Two Doors Down, which will feature bakery goods, wine tastings, and takeout food. Every building on King Street bears a plaque describing its former iteration — Halifax Hardware building, 1915; Stedman Store building, 1900 — and one is slated to be transformed into an open-air market.

Despite a significant other in Florida and a vacation home in Highlands, Halifax is still the place where Wilson wants to be. Call her a preservationist; call her an activist. But when everyone on the streets of Halifax calls out, “Hi, Patterson!” you’ll know that, mostly, she’s just that local girl with the big-deal global background who came home to transform the little town that was a big deal in our nation’s history.