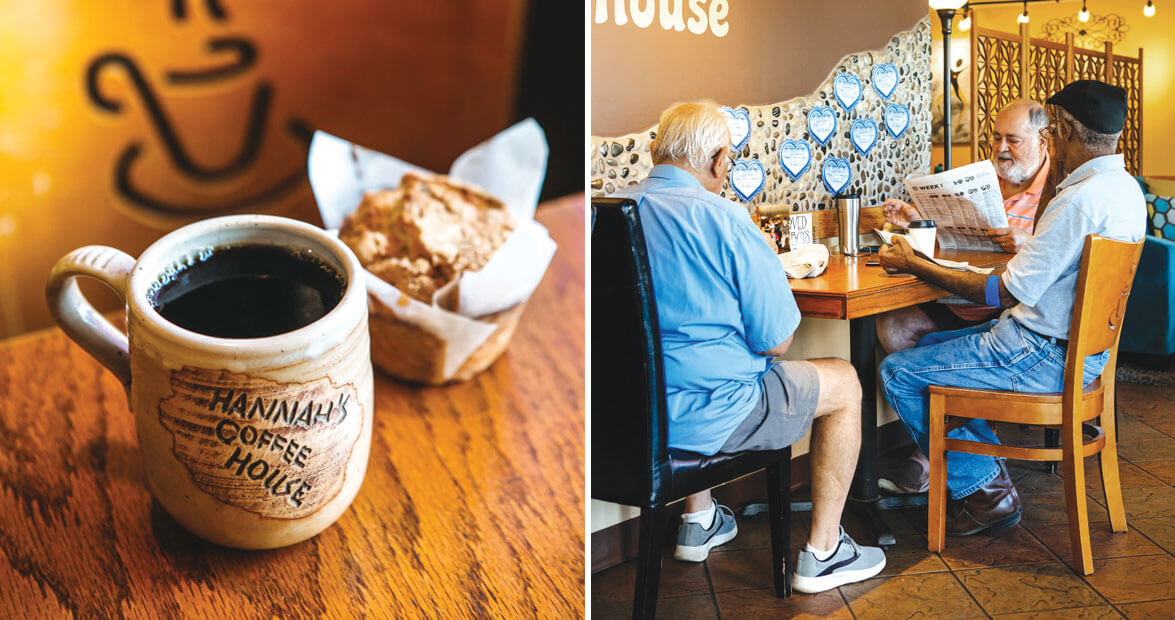 At Hannah’s Coffee House, when the morning rush has slowed to a trickle and the rich aroma of ground beans hangs in the air, the first of The Boys arrives with his battered red travel mug. Ron Olah picks up a newspaper from the front counter as the barista fills his cup. He settles in at his table, where a placard reads, “Reserved for The Boys, 10 a.m. to noon.”

“The Boys” — Olah and fellow retirees Randy Carter and Chip Cloninger — have been meeting at Hannah’s nearly every day since the shop opened in 2013, to read the local paper, talk politics, and gossip.

“The whole purpose of coffee is to have one-on-one interactions and to philosophize,” says Hannah Cyr, who opened the business after seven years of working as a barista in the shop’s predecessor, Broad River Coffee Company. “I want people to feel that the day they set foot in here, they’re a regular.”

The coffee, roasted nearby at Broad River Roasters, draws people in, but the relationships are what make Hannah’s the heartbeat of Shelby. When Bill Jack, a longtime member of The Boys, entered hospice care, many of the staff and regulars at Hannah’s visited him and donated to Hearts for Hospice in his honor. Those hearts now decorate the wall above The Boys’ table.

“You see these people more than your own family,” Cyr says. “They know the ins and outs of your life, and you know theirs.” Customers share with her when their dog dies, or when they become a grandparent for the first time. Cyr wanted to create a space where people put down their cell phones and focus on conversation over a cup of coffee, she says. “I think people crave that.”