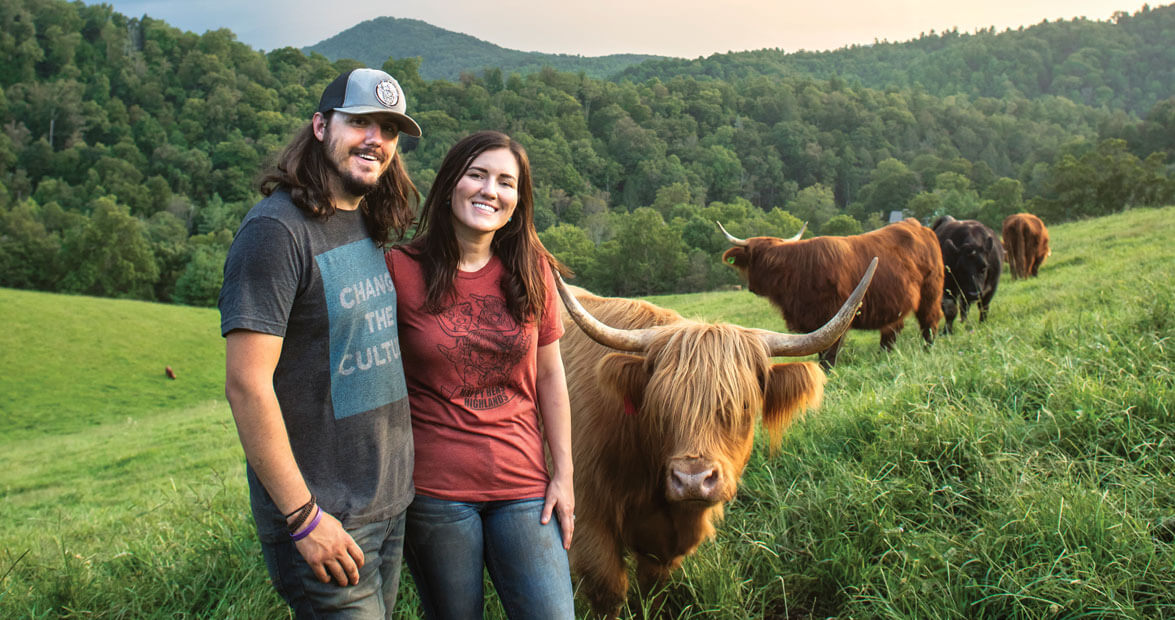 As Emily and Adam Hopson trekked through the forest, high on a mountainside on their farm in Burnsville, they began to worry. The ground cover was thick and slippery. Peering through the trees and rain, they saw only green in every direction. It was May of 2017, and they knew that one of their cows, Roan Bru, had wandered off to give birth. The Hopsons were used to searching the farm to check up on newborns — sometimes for hours, sometimes in the dark with a flashlight. But this was especially bad weather for a baby.

Finally, they spotted them. The little reddish-brown calf was soaked from the rain, and he didn’t know how to nurse. Big for a newborn, he may have gotten stuck during birth, depriving him of oxygen and temporarily stunning him. Adam and Emily gave the calf a name: Baby James. Then, they waited and watched, and patiently tried to teach him to nurse. But they were running out of time, and they knew they had a decision to make. It was time to bring the calf home.

Back at their house, they fed him milk through a tube, and he curled up on a dog bed and fell asleep. 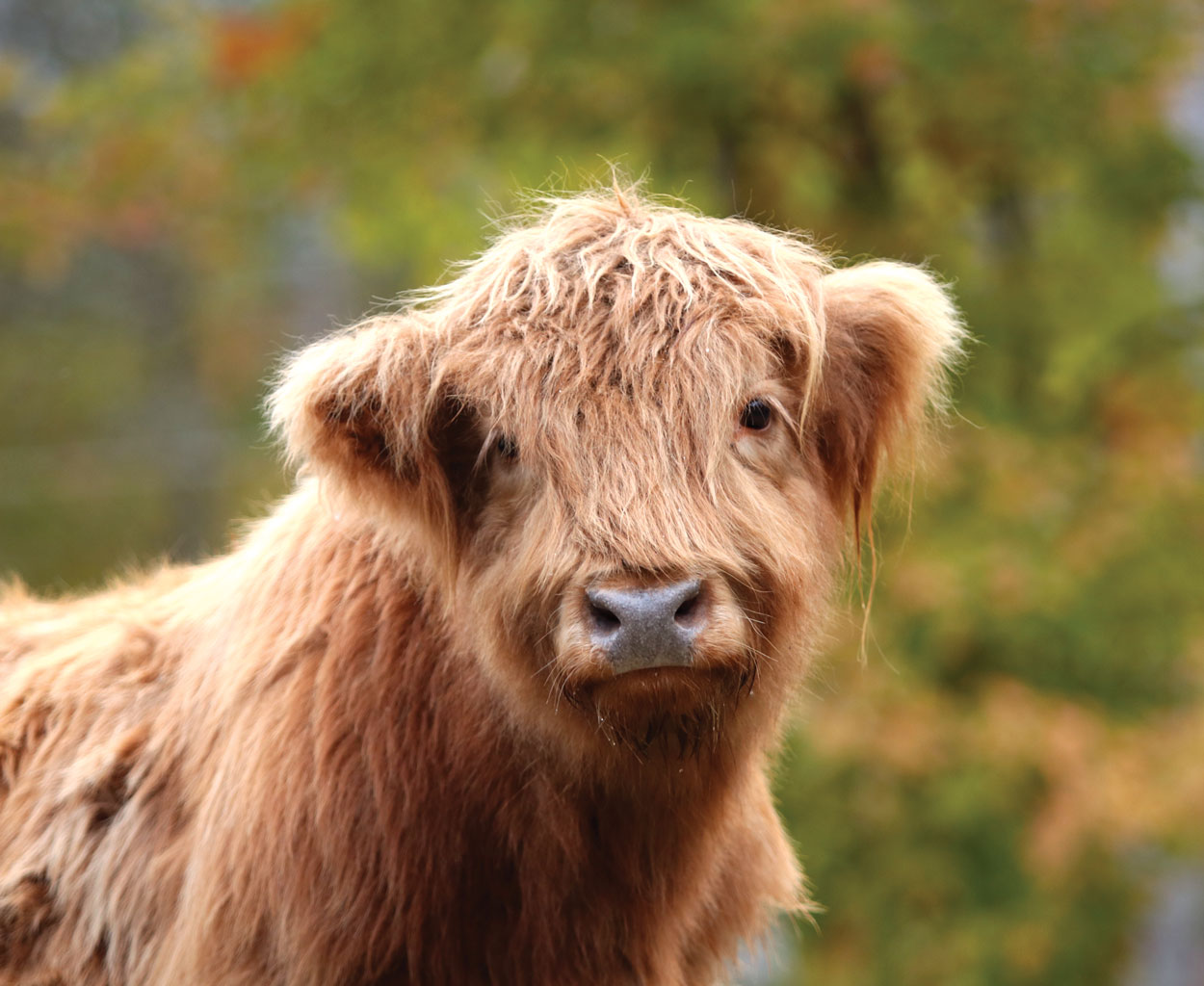 Baby James is the unofficial mascot of Happy Hens and Highlands. photograph by Jack Sorokin

Three years earlier, The Yancey County natives had moved onto Emily’s family farmland, hoping to become more self-sufficient and to connect with the land. They started by raising chickens. But Emily had always dreamed of having a Scottish Highland cow, a resilient, hardy breed known for its impressive horns and long, fuzzy coat. When a friend called to let her know that one was available right down the road, it felt like fate.

The Hopsons gave their farm a name — Happy Hens and Highlands — and Emily immediately started looking for more of the cows she’d fallen in love with. Soon, they had 28. 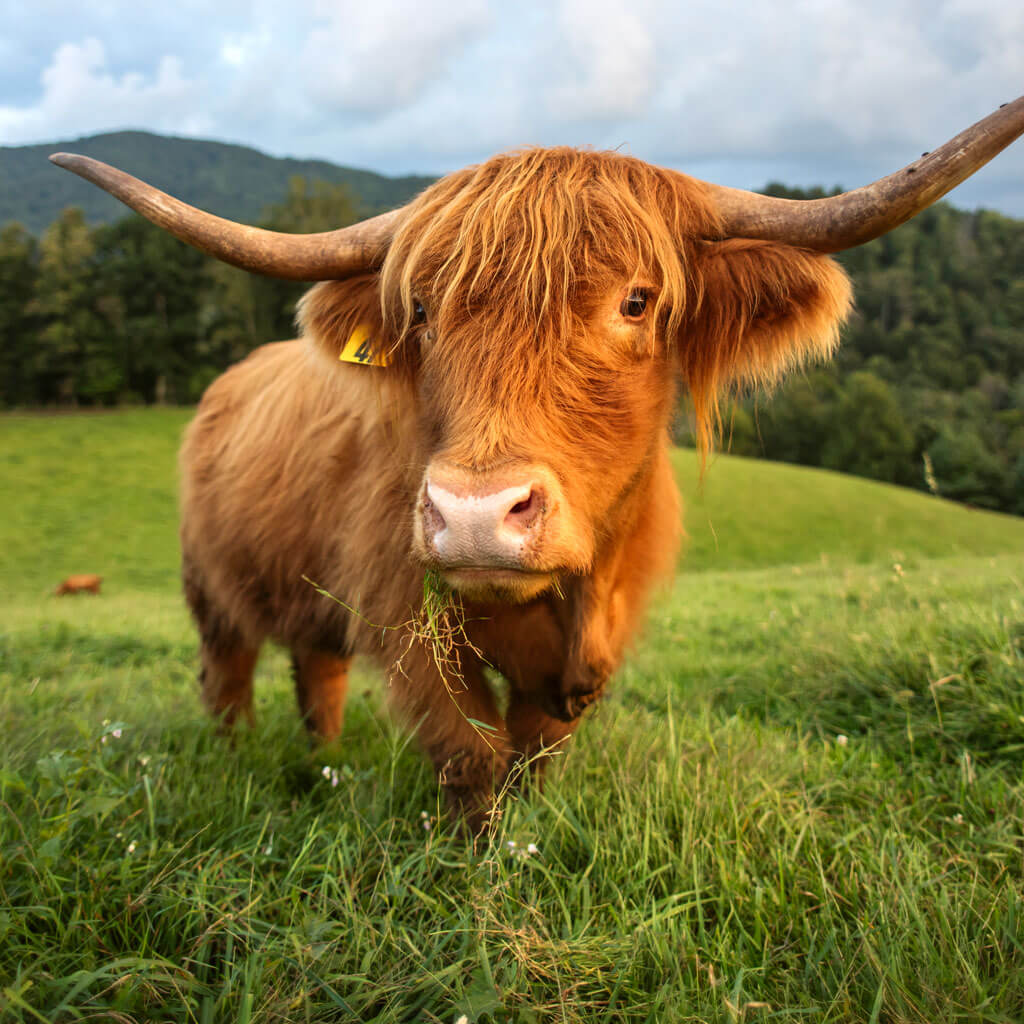 Each of the Hopsons’ cows is given a name: Little Girl, Tiny Tim, Milton, Finnegan, Loretta. This curious one goes by Lady. photograph by Jack Sorokin

The plan was to raise grass-fed beef — but then the babies started being born. “That was it,” Emily says. “We knew we could never part with them.” Today, around 200 acres are home to more than 80 Scottish Highlands and Highland crosses, strictly raised for breeding, to be pasture pets, and to be sold to small hobby farms, where their job is to “mow” the grass in pastures.

Since starting the farm, the Hopsons have traveled to more than 30 states to pick up cows and deliver calves to new homes. They’ve gone camping with diaper-clad calves on cross-country road trips. They’ve taken sandy beach strolls with babies. They’ve explored St. Augustine, Florida, with a cow that curled up at their feet at a dog-friendly restaurant.

And they’ve dealt with fame, as the story of Baby James spread around the world. After they brought him inside that first night, the weak calf bonded with their dogs, who gave him a will to live. “They really mothered him,” Emily says. “He’d act like a dog — he’d run with them, and head-butt them, and try to nurse from their ears.” The pictures they posted online were, predictably, adorable. And although the calf had health complications in his first year of life, the Hopsons never gave up on him.

Now, Baby James is the unofficial mascot of Happy Hens and Highlands. His likeness can be found on T-shirts, coffee mugs, and bumper stickers. He often makes appearances at festivals, and a local craft beer is named in his honor. His escapades are followed by more than 130,000 people on Instagram. Baby James doesn’t quite fit in the house anymore (and he’s a little too big to play with his canine friends), but he’s right at home in the backyard. “We believe we’re here to be stewards of the earth,” Emily says. “To take care of these animals and to love them.”