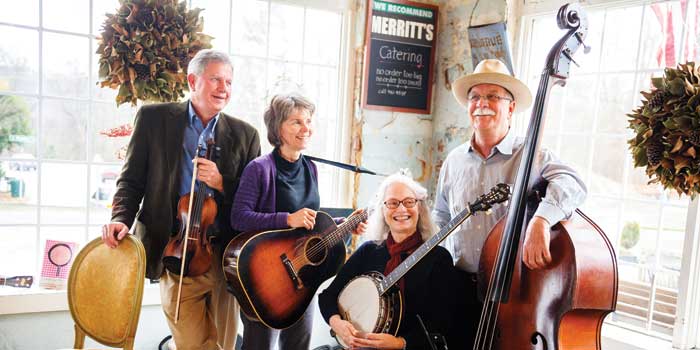 Editor’s note: This story originally appeared in the May 2013 issue.

When you first hear the gritty fidelity of a 78 rpm home recording, it conjures up feelings of seeing a room glow with electric light for the first time — if you listen to the recording long enough. There’s a connection to the past, even if only a sliver, which can sometimes guide you to more.

Wayne Martin, who plays fiddle and harmonica with the Chapel-Hill based band Happy Valley Pals, says this kind of music has a different quality, although it’s impossible to define. “I feel like I can hear it a lot of times,” he says. “When you’re around it, you’re totally captivated.”

Like many revivalist bands and old-time music archivists, members of the Happy Valley Pals have stayed together for the last 20 years because of their curiosity to unearth buried music. The members are multi-talented musicians who played in several bands before coming together. Their string band plays fiddle-led dance music with a strong blues tinge.

“We sing a lot more than most string bands,” Martin says.

Watch the Happy Valley Pals perform an exclusive song for Our State. Go to ourstate.com/videos/happy-valley-pals to view.

His wife, Margaret Martin, and Gail Gillespie, a former editor of Old Time Herald magazine, are masters of older, local styles of finger-picking banjo playing. Their accompaniment, along with Gillespie’s husband, Dwight Rogers, on bowed bass, allows for better backup to their selection of voice-led tunes.

The Martins have been involved in several music preservation endeavors in the area, following the paths of archivists John Avery Lomax and Art Rosenbaum to seek out and preserve community music. But the band formed around an appreciation of the importance of singing in old-time music, a distinction that is less common among string band music devotees.

The couples first met at a Mount Airy fiddlers’ convention and connected over their love of finding little known musicians and styles of music. “I think that might be some of the reason why people are enamored by the music,” Rogers says. “It’s rare.”

The Happy Valley Pals tracked through elaborate liner notes, such as those of old-time revivalist and banjo player Tom Carter, who played with the Fuzzy Mountain String Band. Carter’s notes included stories of how he found and learned the tunes on each record. The liner notes brought Gillespie and Rogers to Laurel Fork, Virginia, in the early ’70s to meet and record Taylor and Stella Kimble. Gillespie and Rogers showed up at the Mayberry Mill one Saturday, but they were disappointed to find the Kimbles weren’t performing that week. Gillespie and Rogers wound up watching the couple play on their front porch a few hours later.

“They were in their 80s playing music together and we thought, ‘Oh, isn’t this romantic,’ ” Gillespie says.

And in one of these recordings, Martin learned that Lonnie Austin, a fiddle player who played on 1920s recordings with Charlie Poole and the North Carolina Ramblers, was alive and living nearby. The two met up and picked some tunes.

“It was a definitive moment,” Martin says.

Although the Happy Valley Pals focus on the local sound of the Piedmont, some traditional tunes of Georgia and Tennessee are sprinkled in due to family connections. Gillespie’s dad was raised on the music of Dr. Humphrey Bate & His Possum Hunters, Tennessee grocers who played the Grand Ole Opry. Martin plays his great-grandfather’s fiddle, the one his grandmother flat footed to when the couple sold vegetables in Atlanta. Although the band plays dance tunes, it’s the lyrics paired with the melodies the members enjoy sharing the most.

“The old people did it that way,” Martin says. “The song wasn’t complete until they’d sung the verses.”

Passing on the music

Today the connections go beyond commercial recordings to the guts and clay of North Carolina, honing that distinct Piedmont sound and passing it on. Sometimes that means teaching others what isn’t expected.

“The banjo players around here did not play clawhammer,” although that style of banjo playing is traditionally paired with old-time style, Gillespie says.

But banjo players didn’t play the finger-picking style popularized by bluegrass players, either. Figuring out that local sound can’t be done by just listening to a recording. The techniques are better transferred in person or through video, Martin says.

And he and the Happy Valley Pals will continue to pass on those techniques and styles that conjure memories of a room glowing with light for the first time.

“I can play music from different places,” Martin says. “But I want at least one foot firmly in the place that I live.”

Wayne Martin produced a collection of field recordings on PineCone Records. Going Down to Raleigh: String Band Music in the North Carolina Piedmont, 1976-1998 includes 48 tracks, historical liner notes, biographies, and photos for each musician. Martin traveled to eight Piedmont counties, recording 11 different musicians. The tracks vary from high-energy versions of “Twinkle Little Star” to the rhythmic banjo and fiddle in “Putting on Airs.”